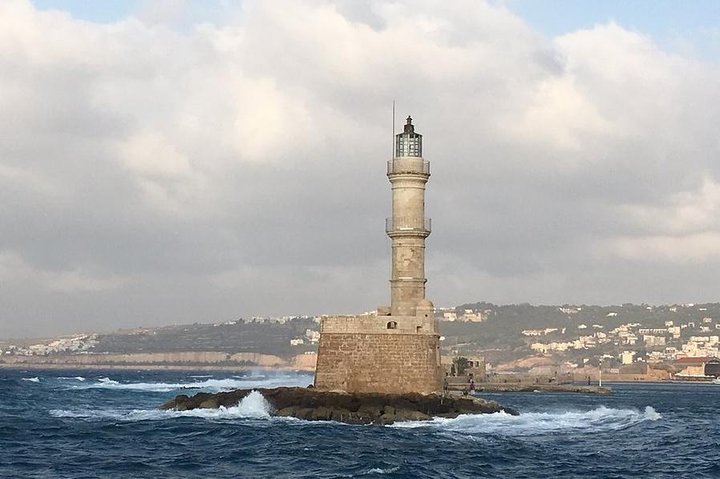 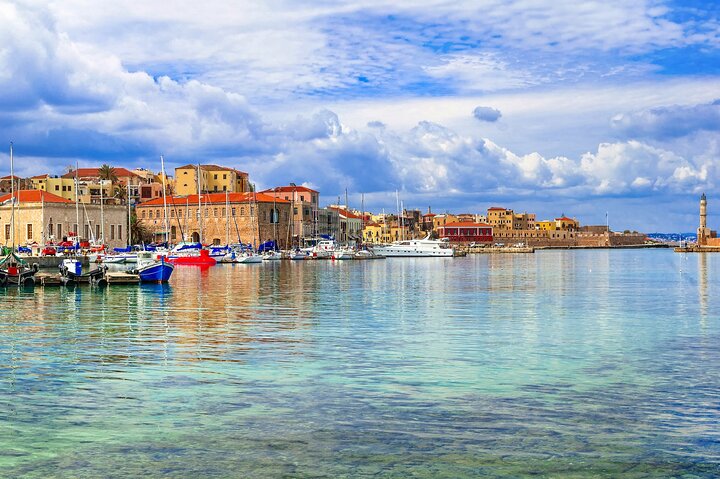 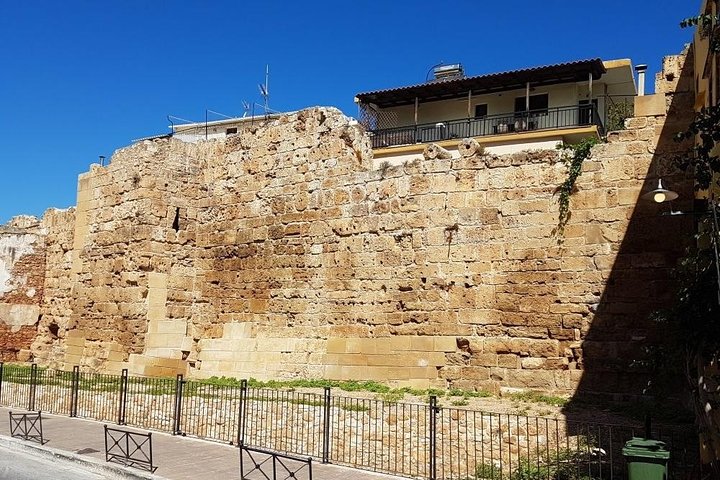 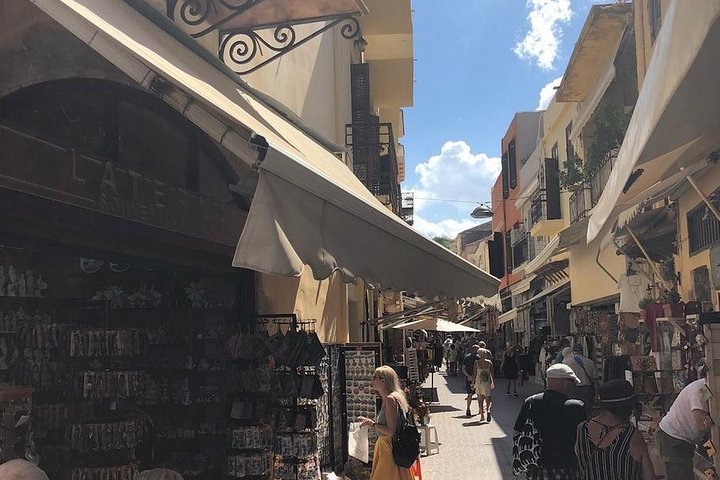 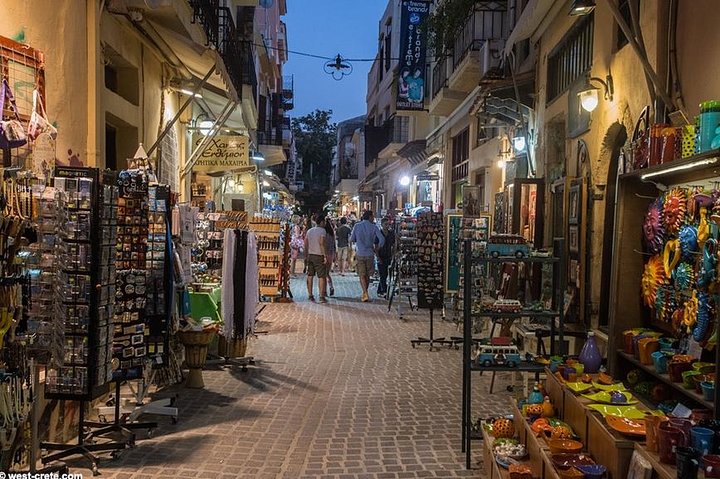 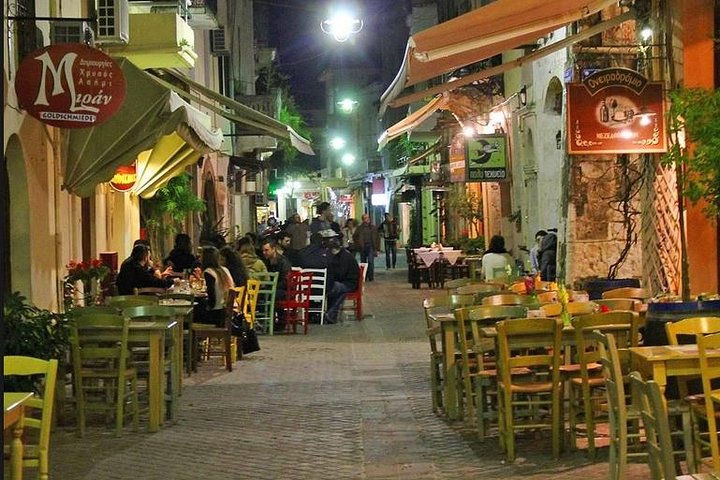 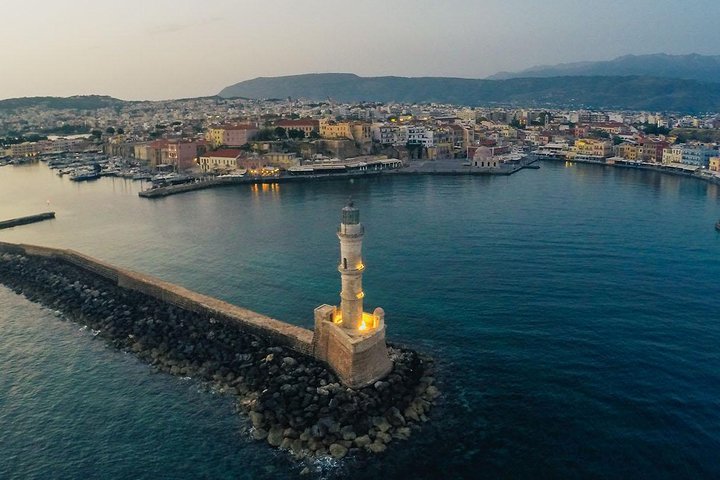 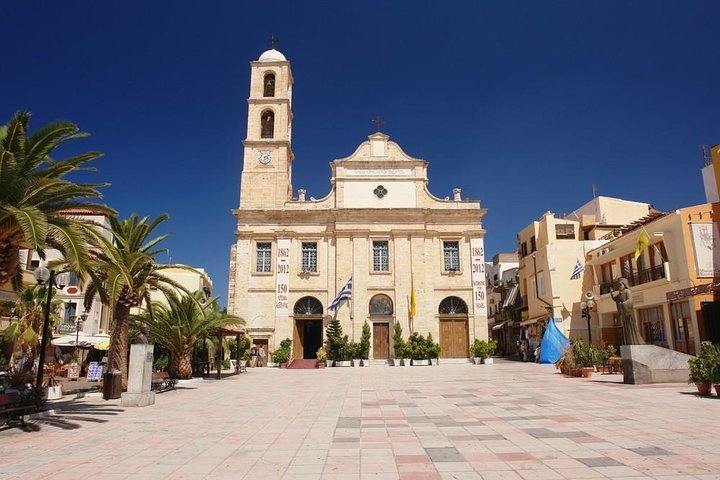 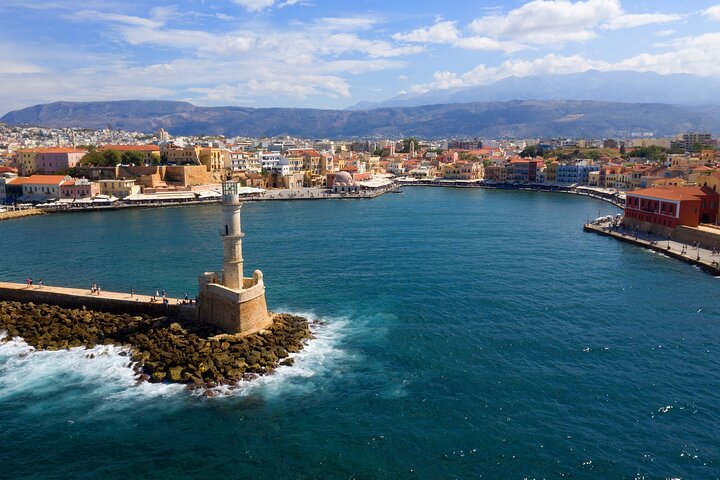 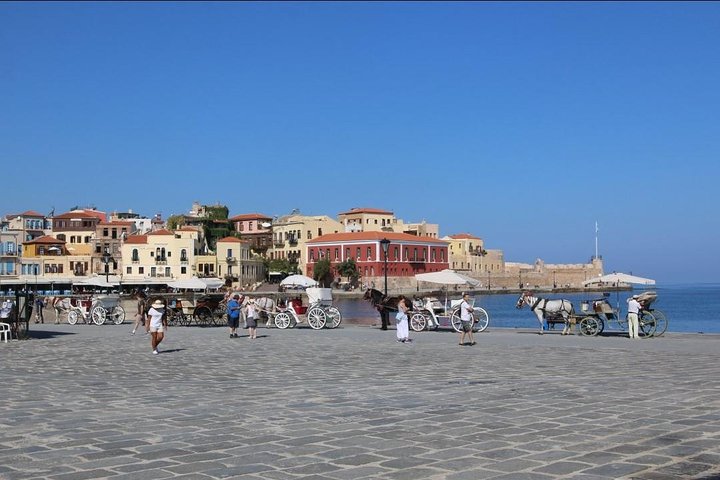 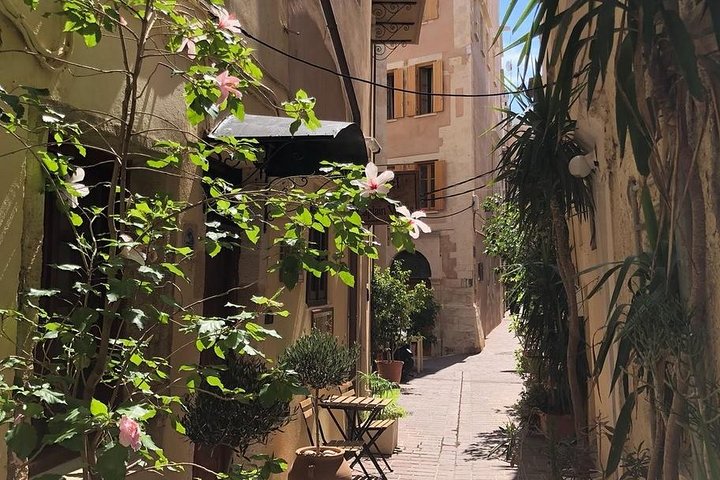 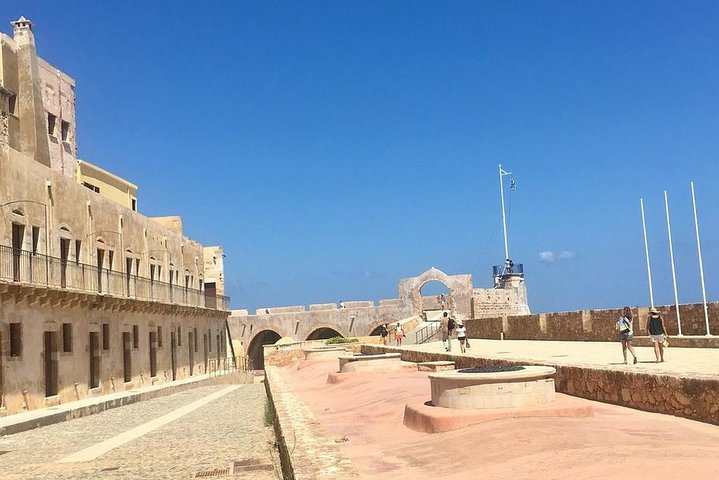 Chania’s Old Town is being inhabited since the ancient ages of the Minoan Civilization from 5000BC. Since then it has always been a vivid place of prosperity and growth, influenced through the ages by the various cultures, Romans, Arabs, Jews, due to its geopolitical place in the Mediterranean Sea and those who invaded it particularly in the late years, such us the Venetians and the Ottoman Turks. We will stroll through the historic alleys and pinpoint the Byzantine and the Venetian/Ottoman Walls and Fortifications, then walk through the main streets and see the emergence of history from the Ancient Ages from the archeological excavations inside the Old Town to the Medieval and Recent Ages through the old buildings, the churches, the synagogues and the mosques. Also we will visit the Orthodox, the Muslim and the Jewish Quarter and how people lived together through times with peace or turbulence.

The old town of Chania with the beautiful Venetian harbor is the heart of the city of Chania and its prefecture that beats loudly during the summer.
Numerous people, tourists and residents of Chania, people of all ages, come here and collect what the historic old town and the enchanting Venetian harbor has to offer.
You will come across archaeological excavations have brought to light many findings, including floor plans of entire buildings that prove that Chania is built on the site of an important ancient Cretan city named Cydonia, and according to tradition, Cydonia was the third largest city founded the king Minos in Crete in 3650-3000 BC
Since then, Kydonia is inhabited in all the later phases of history. It either grew or declined at times. It went through wars, looting and conquests. Her name is paraphrased in Chania. Destroyed and rebuilt many times today the old town of Chania saves intense marks since Crete was the Venetian colony (1252-1645), with the necessary additions made in the next period of the conquest of Crete by the Ottomans (1645- 1898) and the years of the Egyptian rule (1831-1841) that took place during the Ottoman domination.
Observe the architecture of buildings that reflects the different culture and religion of different cultures.
Many buildings were and remain houses, while others house shops. Several, mainly Venetian mansions, have been converted into hotels, while other buildings have been converted into museums and venues that host cultural exhibitions.
All are monuments that are there to lead you through the paths of the history of the place.
Get to know the history of the old city of Chania, which consists of historic districts, squares and neighborhoods.
1 Kasteli, the hill where the history of the city of Chania began to be written, and always constituted the acropolis or the core of the city.
2 Topana, which was the prestigious district of the city.
3 Hebrew, where the Jews who settled in Chania created their own neighborhood.
4 The Fountain, that was the square where the Christians of the city, during the Ottoman domination, and the most central square of Chania in the later years.
5 Splantzia, which was the Ottoman Turkish quarter, when the Turks settled in Chania.

Chania lighthouse, the jewel of the city, is one of the oldest light houses, not only in Greece and the Mediterranean, but also in the world. The lighthouse is a major attraction in the old port of Chania especially at night when it's lit up. The tower is 21m high and is built on a stone base, located at the end of the old harbour's pier opposite to the fortress of "Firkas". Visitors are not allowed to enter the tower. Chania lighthouse was first constructed by the Venetians around 1595 - 1601, and it took its final form, in the shape of a minaret, during the Egyptian Period (1831 - 1841) in around 1839. After the latest restoration, completed in 2006, it was given the formation of the Venetian period. The minaret look is still evident however. The tower is divided in three diverse parts: the base is octagonal, the middle part has sixteen sides, and the third part is circular. The construction material of the base is of the same origin and quality of the material used for the fortification of the city of Chania by the Venetians.

The fortress of Firkas on the northwest side of the port of Chania was constructed between 1610 and 1645 to protect the Venetian harbour entrance from raiders. The fall of the city of Chania in the hands of the Turks in 1645, meant automatically that the fortress belonged to the new conquerors. That is when it got its current name, because “Firka” in Turkish means “barrack”. On the northern side of the Firka fortress were six consecutive domes, that sheltered the large cannons, so that they would face the entrance of the harbor and face any possible attacker. The Firka Fortress was used as a prison since then and up to the Greek civil war of the 20th century. During the Ottoman rule, the Firka Fortress constituted the seat of the military governor of the city. It is the place where the Greek flag was raised, in 1913, the year of the reunion of Crete with Greece. Today, at the entrance of the Fortress is situated the Maritime Museum.

The Orthodox Cathedral of Chania or church of Trimartiri is situated in Halidon street little before the old Venetian harbour of Chania. The present temple was built on the place of an older church of Virgin Mary which dated back to the 14th century. In 1645, during the Ottoman occupation, the temple was converted into a soap factory , owned by the Turkish official Moustafa Pasha Giritli. The construction of the church was completed in 1860 in the style of a three aisle Basilica. On the northeast side of the temple there is the high bell-tower. The church features three aisles with the central one dedicated to the Virgin Mary (celebrated on November 21st), the north aisle one dedicated to Saint Nicholas and the southern one to the Three Hierarchs.

The old Venetian port of Chania, The first thing every visitor notices at the old Venetian port of Chania, is an old building, one of the first Turkish buildings of the island, the Mosque of Hasan Kucuk or Yali Tzamisi. The mosque was built in honor of Küçük Hassan Pasha, the first Turkish military commander of Chania, while the Yali Tzamisi name is interpreted as "mosque of the sea". The building is an example of Islamic architecture Renaissance designed form an Armenian architect, dating from the second half of the 17th century. The mosque operated as Muslim church until 1923. It is a cubic building covered by a large dome supported by four stone arches, while the west and north side is surrounded by an arcade roofed with seven small domes. In the southwest corner there was a minaret from which saved only the base. Today the building operates as an exhibition for cultural events and visual art exhibitions.

The church of Agios Nikolaos, which was built around 1320, during the Venetian Period, was originally a part of the monastery of the Dominican Order. It is quite special as it is equipped with a tower as well as a minaret. During the Venetian period it constituted the most important church in the city. After the predominance of the Turks in Chania the temple was turned into a mosque and was named Hiougkar Tzamisi (mosque of the Emperor), in honor of the sultan of the Ottoman Empire. Its importance is highlighted by the existence of two balconies instead of one on the minaret. In 1928, after being seized by the Christians orthodox, the mosque was once again turned into a church, dedicated to Agios Nikolaos.

During the Venetian occupation (1204 – 1669) the need for closer presence of Venetian fleet in Crete , forced Venice to build Neoria(arsenali), where ships were repaired during the winter. As early as 1467, Venice ordered the construction of a number of shipyards , two per towns of Chania and Rethymnon . The first two shipyards in Chania completed in 1526. The 1593 had been constructed 16 shipyards, but needed repair. In 1599 completed the southern complex with the construction of 17 Neoria. In 1607, along with the extension of the north bastion, construction begins on the inlet port to the east another five shipyards, which are known as Neoriο of Moro, by the name of General Intendant who proposed. From these only two were completed, until the beginning of the third arch. Later, this third Drydock housed with simple roof, which collapsed in the 1941 bombing. During the Turkish occupation the lack of maintenance of the harbor and degradation role contributed to abandon the initial use of the shipyards and converted mainly in military warehouses . From large complex with 17 shipyards gradually were demolished and were cut down to nine. Today survives a group of 7 Neoria and another to the west, the Grand Arsenal (now Center of Mediterranean Architecture ) .

Etz Hayyim was converted into a Synagogue in the 17th century, when the Jewish community of Chania purchased the Church of St. Catherine, an empty 15th-century Venetian church. The synagogue, which suffered serious bombardment losses, was abandoned after the end of World War II and reopened in 1999, with the intervention and support of the World Monument Fund (WMF), in co-operation with the Central Israeli Council of Greece. Nowdays the Etz Hayyim Synagogue is the only active synagogue that has survived on the island.

Informacion Adicional
"Confirmation will be received at time of booking"
"Not wheelchair accessible"
"Near public transportation"
"You must be able to get in and get out of the car. Some places are not wheelchair accessible and we have to follow different route"
"In case of traveller's serious health problems or other medical concerns please notify us"
"Most travelers can participate"
"This experience requires good weather. If it’s canceled due to poor weather, you’ll be offered a different date or a full refund"
"This is a private tour/activity. Only your group will participate"
"Hand sanitizer available to travelers and staff"
"Social distancing enforced throughout experience"
"Transportation vehicles regularly sanitized"
"Guides required to regularly wash hands"
"Regular temperature checks for staff"
"Temperature checks for travelers upon arrival"

Hora de Inicio: Suppliers and travelers coordinate start times within the given time periods. 7/31/2019 - 7/4/2022
Duración: 4 Hours
Lugar de comienzo: Traveler pickup is offered
Pick up and drop off at Souda port, your accommodation or any other convenient location in the greater Chania area. Please contact us regarding your pick up place for further
information