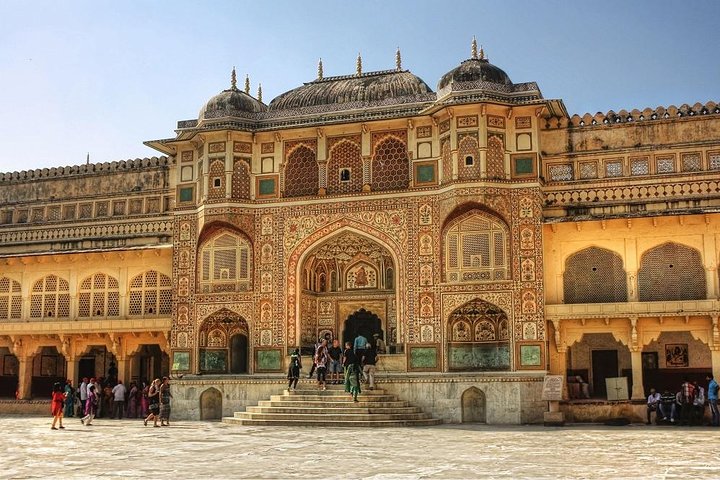 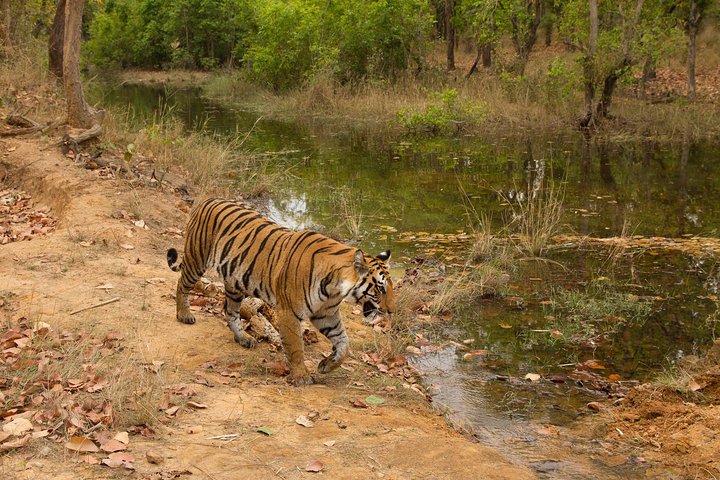 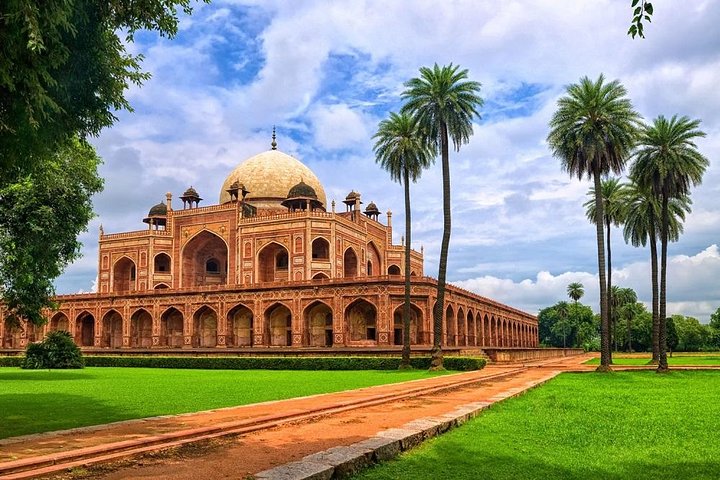 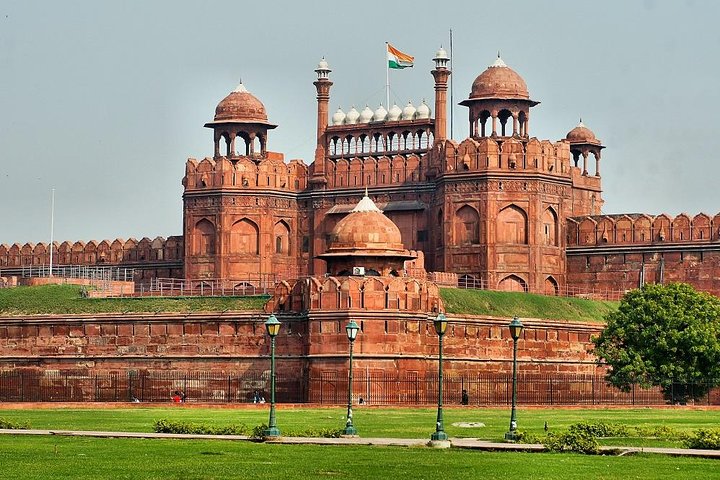 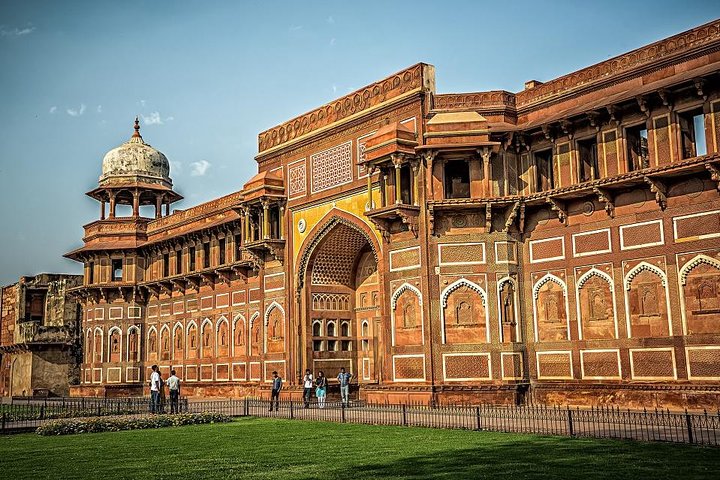 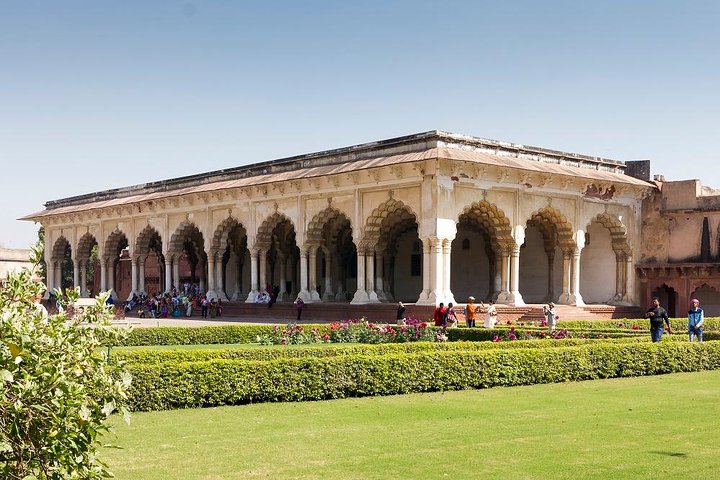 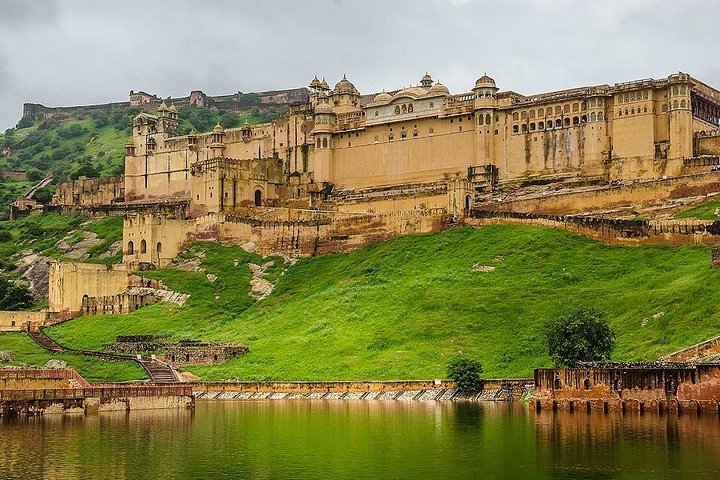 This amazing tour of Taj with Glimpse of Tiger & Culture of Rajasthan is a perfect blend of Indian history, culture & wildlife. This tour takes you to the iconic cities of Delhi, Agra and Jaipur which complete the golden triangle circuit. Apart from this, the tour includes a visit to the Ranthambore National Park, a natural home to the Royal Bengal Tigers. Ranthambore is a place where one can see picturesque tigers, leopards, striped hyenas, sambar deer, etc. On this tour, you will be visiting four different cities with different reasons to visit, but glorious at the same time. You will be fascinated to see how interesting cultures are upheld in these places. So, if you want to get to the heart of India, avail this package and begin your journey now!

Evening return to hotel and relax.

Pass By: Red Fort, Netaji Subhash Marg, New Delhi 110002 India
One of the historic monuments located in Delhi and gets its name from the red colour sandstone used for construction by the Mughals. This fort was used as a ceremonial spot for the royals and is used for political and national ceremonies even today. Constructed in 1639 by the fifth Mughal Emperor Shah Jahan as the palace of his fortified capital Shahjahanabad, the Red Fort is named for its massive enclosing walls of red sandstone and is adjacent to the older Salimgarh Fort, built by Islam Shah Suri in 1546 AD. The imperial apartments consist of a row of pavilions, connected by a water channel known as the Stream of Paradise.

Stop At: Chandni Chowk, Near Red Fort, New Delhi 110006 India
The Chandni Chowk (Moonlight Square) is one of the oldest and busiest markets in Old Delhi, India. Chandni Chowk is located close to Old Delhi Railway Station. The Red Fort monument is located within the market. It was built in the 17th century by Mughal Emperor of India Shah Jahan and designed by his daughter Jahanara. The market was once divided by canals (now closed) to reflect moonlight and remains one of India's largest wholesale markets. The market's history dates to the founding of the capital city of Shahjahanabad when Emperor Shah Jahan established the Red Fort on the banks of the Yamuna River beside his new capital. Chandni Chowk also famous for foodies. if you want to taste local food of delhi, have to visit Chandani Chowk. Delicacy food is Babu Ram Paranthe wala, Old Famous Jalebi wala, Kuremal ki Kulfi, Natraj Dahi Bhalla and many more....
Duration: 1 hour

Stop At: Humayun's Tomb, Mathura Road Opp Nizamuddin Mosque, New Delhi 110013 India
This magnificent garden tomb is the first substantial example of Mughal architecture in India. Humayun's Tomb It was built in 1565 A.D. nine years after the death of Humayun, by his senior widow Bega Begam. Inside the walled enclosure the most notable features are the garden squares (chaharbagh) with pathways water channels, centrally located well proportional mausoleum topped by double dome. There are several graves of Mughal rulers located inside the walled enclosure and from here in 1857 A.D; Lieutenant Hudson had captured the last Mughal emperor Bahadur Shah II.
Duration: 2 hours

Pass By: Rashtrapati Bhavan, Rajpath, New Delhi 110004 India
Home to the President of the world’s largest democracy, epitomizing India’s strength, its democratic traditions and secular character. It was Sir Lutyens who conceptualized the H shaped building, covering an area of 5 acres on a 330 acre estate. This mansion has a total of 340 rooms spread over four floors, 2.5 kilometres of corridors and 190 acres of garden area. Painstaking efforts of thousands of labourers including masons, carpenters, artists, carvers, and cutters saw the completion of this masterwork in the year 1929.

Pass By: India Gate, Rajpath Near Connaught Place New Delhi, New Delhi 110001 India
Right opposite the Rashtrapati Bhavan, at the centre of New Delhi stands the 42 m high India Gate, an "Arc-de-Triomphe" like archway in the middle of a crossroad. Almost similar to its French counterpart, it commemorates the 70,000 Indian soldiers who lost their lives fighting for the British Army during the World War I. The memorial bears the names of more than 13,516 British and Indian soldiers killed in the North western Frontier in the Afghan war of 1919.

Stop At: Qutub Minar, Qutb Minar, Mehrauli, New Delhi 110030 India
A soaring, 73 m-high tower of victory, built in 1193 by Qutab-ud-din Aibak immediately after the defeat of Delhi's last Hindu kingdom. The tower has five distinct storeys, each marked by a projecting balcony and tapers from a 15 m diameter at the base to just 2.5 m at the top. The first three storeys are made of red sandstone; the fourth and fifth storeys are of marble and sandstone. At the foot of the tower is the Quwwat-ul-Islam Mosque, the first mosque to be built in India. An inscription over its eastern gate provocatively informs that it was built with material obtained from demolishing '27 Hindu temples'. A 7 m-high iron pillar stands in the courtyard of the mosque. It is said that if you can encircle it with your hands while standing with your back to it your wish will be fulfilled.
Duration: 1 hour 30 minutes

No meals included on this day.
Accommodation included: Overnight stay at hotel in New Delhi

Stop At: Taj Mahal, Dharmapuri, Forest Colony, Tajganj, Agra 282001 India
Taj Mahal is located in the historical city of Agra. Called as the "symbol of love", it was built by the Mughal Emperor Shah Jahan as a memorial for his third wife, Mumtaz Mahal. Every year visitors numbering more than the entire population of Agra passes through the magnificent gates to catch a glimpse of this breath taking monument. Described by Rabindranath Tagore as “a teardrop on the cheek of eternity”, the Taj Mahal is considered as the finest example of Mughal architecture and is now a UNESCO world heritage site. Covering a land over 60 bighas, the Taj Mahal was constructed using white marble obtained from Makrana in Rajasthan
Duration: 2 hours

Stop At: Agra Fort Rakabgani, Agra 282003 India
Built by Emperor Akbar on the west bank of the river Yamuna, the Agra Fort dominates the centre of the city. The crescent-shaped fort has a 20-metre high and 2.4-km long outer wall that contains a maze of buildings that form a small city within a city. The Diwan-i-Aam (hall of public audience), the Diwan-i-Khas (hall of private audience), the octagonal tower known as Musamman Burj, Khas Mahal, Sheesh Mahal (the mirror palace) and the Anguri Bagh (the Grape Garden) are the other places to see within the fort. From the sight of it the magnificent structure in Red Sand Stone looks strong and invincible. The common belief goes that it was built by the Mughal emperor Akbar and further developed by his heirs. But in reality the fort was actually a small fortress which a Hindu war lord had built long back around the 5th century viewing the strategic importance of Agra on the banks of River Yamuna.
Duration: 2 hours

Stop At: Fatehpur Sikri India
After breakfast checkout from hotel & drive towards Ranthambore.

En-route visit Fatehpur Sikri (Visit – 120 minutes)
Old deserted town of Mughal Dynasty –Fatehpur Sikri built in red sandstone in honor of Saint Salim Chisti who foretold the birth of 3 sons to Emperor Akbar, is an example of robust stability combined with originality. This magnificent fortified ancient city, was the short-lived capital of the Mughal empire between 1572 and 1585, during the reign of Emperor Akbar. Earlier, Akbar had visited the village of Sikri to consult the Sufi saint Shaikh Salim Chishti, who predicted the birth of an heir to the Mughal throne. When the prophecy came true, Akbar built his new capital here, including a stunning mosque, still in use today, and three palaces, one for each of his favourite wives – one a Hindu, one a Muslim and one a Christian (though Hindu villagers in Sikri dispute these claims).

Stop At: Ranthambore Tiger Reserve, Sheopur - Sawai Madhopur Road Near Madina Hotel, Ranthambore National Park 322001 India
Early morning proceed for Jungle safari by Jeep at Ranthambore National Park. Since becoming one of the original areas under Project, the park has recovered much of its natural beauty & dry deciduous forest has been restored. Jungle Safari is an exciting option here with high chances of spotting the big cat as well as photographing it. Excursions around the park give valuable insights into the various flora & fauna.

After breakfast checkout from hotel & drive towards. Upon arrival in Jaipur check-in to pre booked hotel.
Duration: 2 hours

Evening return to hotel and relax.

Stop At: Amber Palace, Devisinghpura, Amer, Jaipur 302001 India
A fascinating blend of Hindu and Muslim architecture, this fort was built by Raja Man singh on the hill side in the 16th century. The construction was started by Raja Mansingh I in 1592 and was completed by his descendant Jai singh I. While the exterior of the fort are rugged, equally bewitching are the interiors where the fusions of Hindu and Muslim architectural styles find ultimate refinement. Painted scenes of hunting and war adorn the wall with precious stones and mirrors set in to the plaster. In the foreground is the Maota Lake giving a magnificent reflection of the Fort.
Duration: 2 hours

Stop At: Jal Mahal, Amer Road, Jaipur 302002 India
Possibly the most serene sight amidst the chaos of Jaipur is the beautiful JalMahal Jaipur, the Water Palace. This low-rise symmetrical palace, that once was a shooting lodge for the Maharajah, appears to float in the centre of Sagar Lake. The light sand coloured stone walls of the JalMahal Jaipur are at a stark contrast to the deep blue of the waters of the lake, while from the innards of the palace lush foliage sprouts.
Duration: 10 minutes

Stop At: Hawa Mahal - Palace of Wind, Hawa Mahal Tripolia Bazaar Road Badi Choupad, J.D.A. Market, Pink City, Jaipur 302002 India
Located at a stone throw away from the commercial center of Pink City, HawaMahal is considered as the landmark of Jaipur. Known as the 'Palace of winds", this five story building was built in 1799 by Maharaja SawaiPratap Singh. This palace is decorated with 953 windows or 'Jharokhas' which are adorned with intricate designs. There's a small museum within the complex of HawaMahal, which houses famous items like miniature paintings and ceremonial armor.
Duration: 10 minutes

Stop At: City Palace of Jaipur, Tripolia Bazar Near Jantar Mantar, Jaipur 3023002 India
A palace with beautiful architecture and cultural artwork was once the seat of the Kings during their reign. City Palace is a complex of courtyards, gardens, and buildings situated right at the centre of the Old city. One of the ideal places for the tourists and a must visit because of its impressive history, architecture, gardens, an array of courtyards, and houses several other buildings in it. Blessed with the beauty of urban layout, City Palace is more than just a tourist destination; it is an excellent example of design, art, and creativity that can be elaborated as an exquisite symbol.
Duration: 2 hours

Stop At: Jantar Mantar - Jaipur, Tripoliya Bazaar near entrance to City Palace, Jaipur 302020 India
Jantar Mantar is a collection of nineteen architectural astronomical instruments built by the Rajput king Sawai Jai Singh II, and completed in 1734. It features the world's largest stone sundial, and is a UNESCO World Heritage site. It is located near City Palace and HawaMahal.The instruments allow the observation of astronomical positions with the naked eye. The monument expresses architectural innovations, as well as the coming together of ideas from different religious and social beliefs in 18th-century India.The observatory is an example of the Ptolemaic positional astronomy which was shared by many civilizations.
Duration: 1 hour

Meals included:
• Breakfast: In Jaipur
No accommodation included on this day.