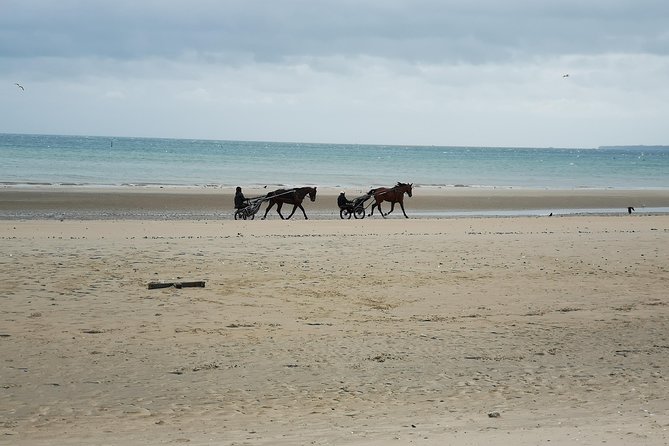 Take a private tour from Bayeux to Normandy, where you’ll relive the events of the Allied invasion on June 6, 1944 – more famously known as D-Day. You can personalize this private tour and determine how long you spend at the various WWII sites. Your private guide will give you unique insight into the events that took place on the landing beaches and battlefields of Normandy and tell you about the British, American, Canadian and French troops. You can also visit the cemeteries and museums.

During the nights of June 5 and 6, 1944, more than 16,000 paratroopers landed in Normandy, in northwestern France, and began the D-Day invasion of World War Two. Soon after, British, American, French and Canadian troops landed on various beaches on the Normandy coast and engaged in heavy fighting over the following days, which eventually led to the end of the European part of WWII.

This flexible private tour from Bayeux allows you to personalize your own itinerary – see what you want for however long you want! Visit the famous landing beaches, like Utah Beach (the first beach secured by the Allies) and Omaha Beach (where some of the heaviest fighting took place, giving it the nickname Bloody Omaha). You can also visit the Airborne Museum of Saint-Mere-Eglise or the American Cemetery, on the eastern end of Omaha Beach, which commemorates the US soldiers who died in this battle. This expansive space of reflection is the final resting place of 9,387 soldiers.

Or maybe you’d prefer to see Sword Beach, where the British, along with Free French soldiers, began their invasion of Normandy and quickly moved to capture Pegasus Bridge. You can also visit the Hillman Bunker Complex, outside the village of Colleville-Montgomery; the Merville Battery Museum; or the Commonwealth Military Cemeteries, where messages and epitaphs bear testament to the lives lost during the Normandy invasion.

If you’re interested in the Canadian participation around Juno Beach, visit the Juno Beach Center and the Canadian Cemetery near the villages of Veny-sur-Mer and Reviers. You can also choose to see the 12th-century Ardenne Abbey, initially the main point of French resistance and the site where 11 Canadian prisoners of war were executed.

However you choose to customize your private tour, you are sure to have a fascinating and interesting day at the D Day sites of Normandy.

Informacion Adicional
"Confirmation will be received within 48 hours of booking, subject to availability"
"Wheelchair accessible"
"Stroller accessible"
"Service animals allowed"
"Near public transportation"
"Infant seats available"
"Most travelers can participate"
"NST provides you with masks as well as hydroalcoholic gel. Our vehicles are disinfected after each use and the distance is respected."
"This is a private tour/activity. Only your group will participate"