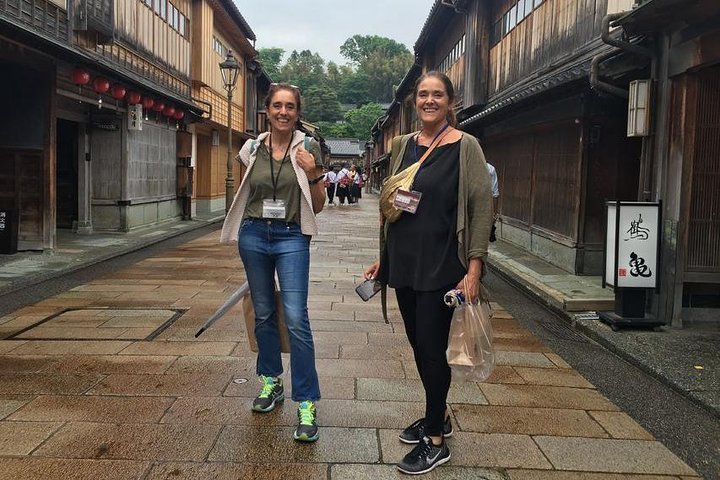 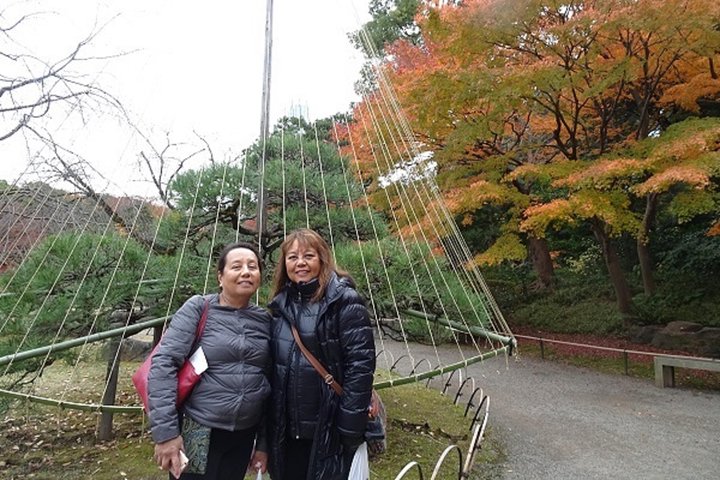 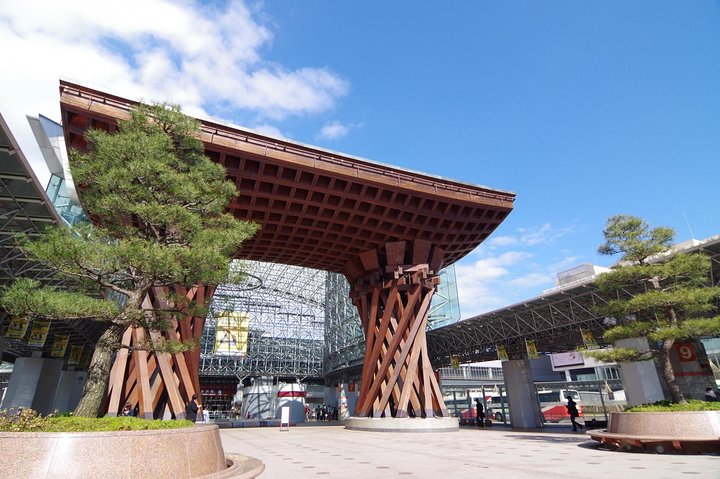 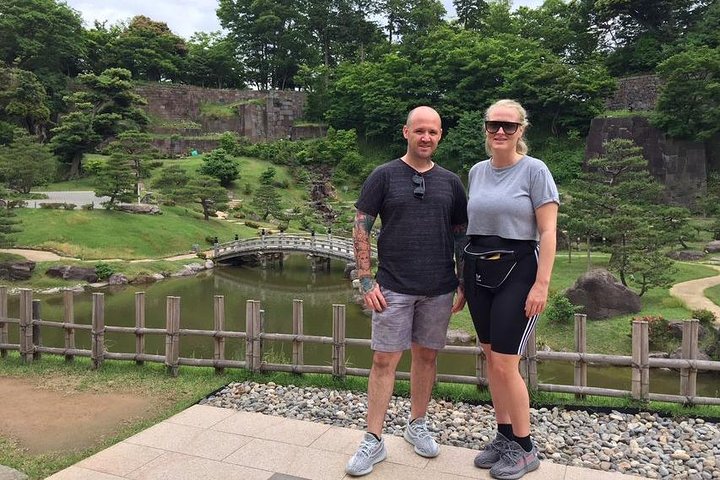 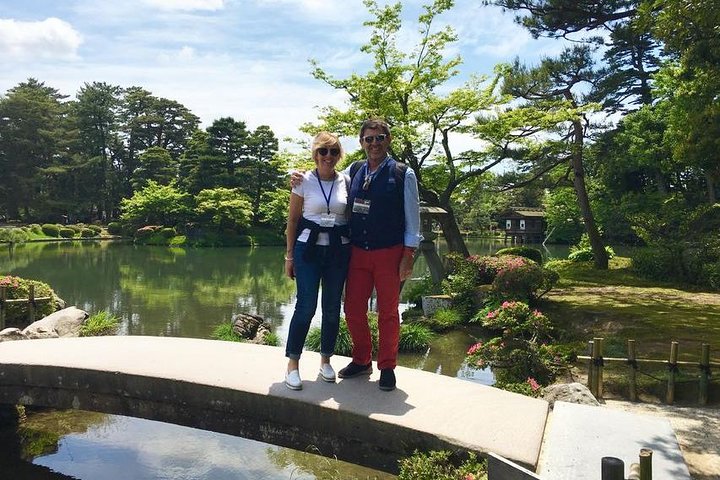 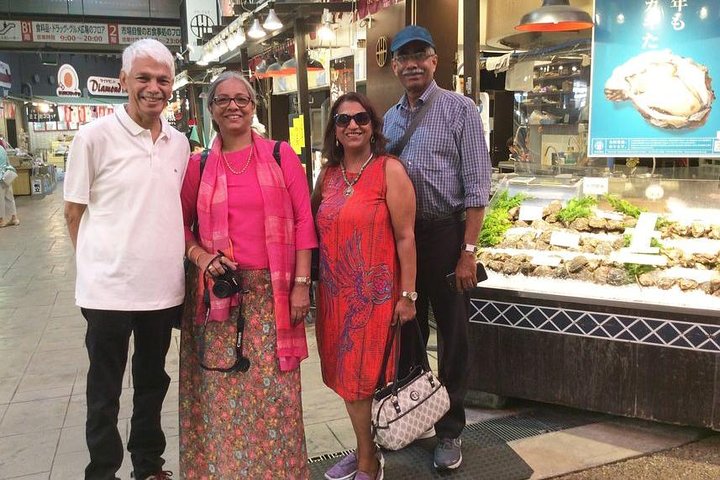 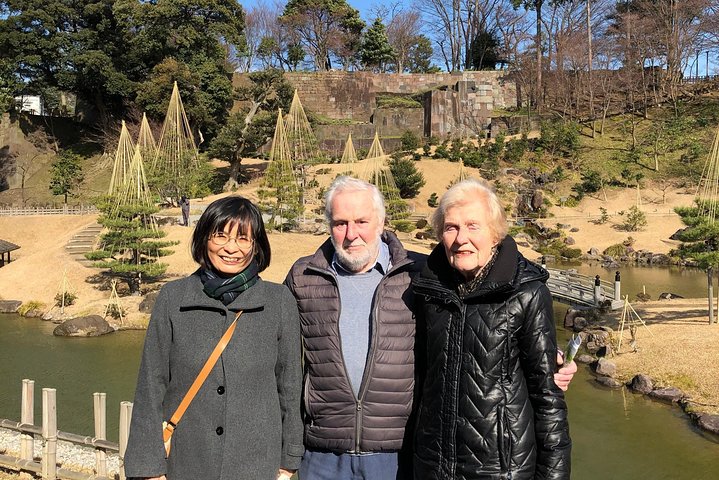 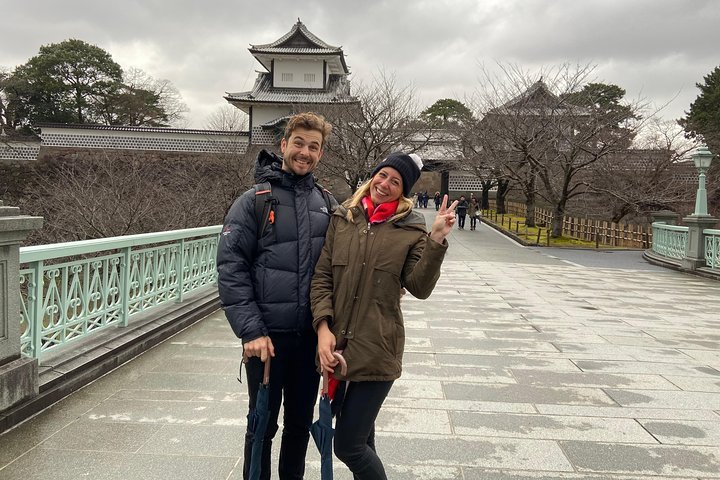 Explore the beautiful town of Kanazawa on this customized, four-hour walking tour. Your nationally/state licensed and experienced multilingual guide will efficiently provide views of the city that most tourist do not get to see.

Start your day by meeting your guide at your hotel, then visit possible sites such as Kenrokuen, one of the "Three Great Gardens of Japan"; the expansive Higashi Chaya District, a traditional teahouse district founded in the Edo Period; or the 21st Century Museum, a museum of contemporary art.

Note*1: Please select your must-see spots from a list in the tour information to create your customized itinerary.
Note*2: Nationally and State Licensed Tour Guide-Interpreter certification is issued by the Japanese government requires a good knowledge and understanding of Japanese culture and history.

Kenrokuen (兼六園) in Kanazawa is justifiably classified as one of Japan's "three most beautiful landscape gardens" alongside Mito's Kairakuen and Okayama's Korakuen. The spacious grounds used to be the outer garden of Kanazawa Castle and were constructed by the ruling Maeda family over a period of nearly two centuries. Opened to the public in 1871, Kenrokuen features a variety of flowering trees which provide the garden with a different look for each season.

The D.T. Suzuki Museum (鈴木大拙館, Suzuki Daisetsu Kan) is a small museum commemorating the life and works of Suzuki Daisetz Teitaro (1870-1966), a prominent Buddhist philosopher. The museum was opened in 2011 in the district of Kanazawa where Suzuki was born, a ten minute walk from Kenrokuen. On display are exhibitions showcasing the writings of D.T. Suzuki which allow the visitor to learn more about his life and philosophy. In addition, the architecture of the museum serves as an interpretation of D.T. Suzuki's life and religious scholarship; its use of clean, simple lines and open spaces causes visitors to pause and reflect.

Myoryuji Temple (妙立寺, Myōryūji), commonly known as Ninjadera ("Ninja Temple"), was built by the Maeda lords, rulers over the region during the Edo Period. While not actually associated with ninja, the temple earned its nickname because of its many deceptive defences.

Since the shogun imposed strict building restrictions as one way of weakening his regional lords, Myoryuji was designed to circumvent the restrictions and serve as a disguised military outpost. It was built with considerable defences and escape routes, so that its defenders could alert the castle in the event of an attack.

The 21st Century Museum of Contemporary Art (金沢21世紀美術館, Kanazawa Nijūichiseiki Bijutsukan) opened in 2004 in downtown Kanazawa, just a few steps from Kenrokuen. It exhibits works of acclaimed contemporary artists from Japan and all over the world, and is among Japan's most popular art museums.

The architecture of the 21st Century Museum is unique and distinguishes it from other museums and buildings around Kanazawa. The museum is comprised of a circular building, 112.5 meters in diameter, with no facade or main entrance. It was designed without a front or back to discourage its patrons from approaching the museum, and consequently its art, from only one direction.

The Seisonkaku Villa (成巽閣, Seisonkaku) was built in the last years of the Edo Period by a Maeda lord for his mother. It is one of the most elegant, remaining samurai villas in Japan.

Located in the southeast corner of Kenrokuen, Seisonkaku is a large structure with a number of expansive tatami rooms on two floors. One of its interesting features is the roof which covers its garden viewing deck. It was built without supports that would interrupt the view of the garden.

Nagamachi (長町) was a samurai district located at the foot of the former Kanazawa Castle, where samurai and their families used to reside. The area preserves a historic atmosphere with its remaining samurai residences, earthen walls, private entrance gates, narrow lanes and water canals.

One of the main attractions of the district is the centrally located Nomura-ke, a restored samurai residence displaying the lifestyle and artifacts of the era when samurai were prosperous. In contrast is the Shinise Kinenkan Museum, a restored pharmacy displaying the lives of the merchant class which rose in prosperity as the samurai declined.

Omicho Market (近江町市場, Ōmichō Ichiba) has been Kanazawa's largest fresh food market since the Edo Period. Today, it is a busy and colorful network of covered streets lined by about 200 shops and stalls. While most shops specialize in the excellent local seafood and produce, you can also find flowers, clothing, kitchen tools and more on sale.

Although the market is most exciting during the morning hours, it also gets quite busy around noon, when tourists and locals arrive to have lunch at restaurants inside the market. It is not unusual for lines to build in front of the popular restaurants, many of which specialize in rice bowls topped with fresh Kanazawa seafood.

From 1583 to the end of the Edo Period, Kanazawa Castle (金沢城, Kanazawajō) was the seat of the powerful Maeda Clan, lords of Kaga, a feudal domain ranking second only to the Tokugawa possesions in terms of size and wealth.

The castle burnt down several times over the centuries, and the most recent fires of 1881 were survived only by two storehouses and the Ishikawa-mon Gate. The gate dates from 1788 and faces Kenrokuen. For several decades, Kanazawa University occupied the former castle grounds until the campus was moved to the city's outskirts in the early 1990s. Since then, a project is underway to rebuild the castle's former buildings. In the meantime, most central structures are standing again and make a visit more interesting.

A chaya (茶屋, lit. teahouse) is an exclusive type of restaurant where guests are entertained by geisha who perform song and dance. Kanazawa has three well preserved chaya districts, Higashi Chayagai (Eastern Chaya District), Nishi Chayagai (Western Chaya District) and Kazuemachi. Each of the three districts has its own charms and mix of shops, cafes and chaya restaurants.

The Nishi Chaya District (西茶屋街, Nishi Chayagai), is a compact area just a short walk from the Ninja Temple. It is much smaller and quieter than the Higashi Chayagai and has just one attraction open to the public: a museum, the Nishi Chaya Shiryokan, which displays the history of the district and is a meeting place for free tours of the area (Japanese only).

Oyama Shrine (尾山神社, Oyama Jinja) is dedicated to Maeda Toshiie, the first lord of the powerful, local Maeda Clan. The shrine was constructed in 1599 by Toshiie's successor, Maeda Toshinaga on Mount Utatsu. It was later moved to its present location.

Oyama Shrine is known for its unusual gate, which was designed by a Dutch architect, using elements of European and Asian religious themes. While the first story displays a mixture of Japanese and Chinese influence, the upper stories once served as a lighthouse and feature a Dutch style, stained glass window.

Duración: 4 Hours
Lugar de comienzo: Traveler pickup is offered
This special tour will be conducted with a public transportation and cruising taxi as stated in the tour information, NOT including private vehicle. Your guide will pick you up at the meeting point on foot. If you need a private vehicle, please feel free to ask us and we will estimate an additional cost for you.