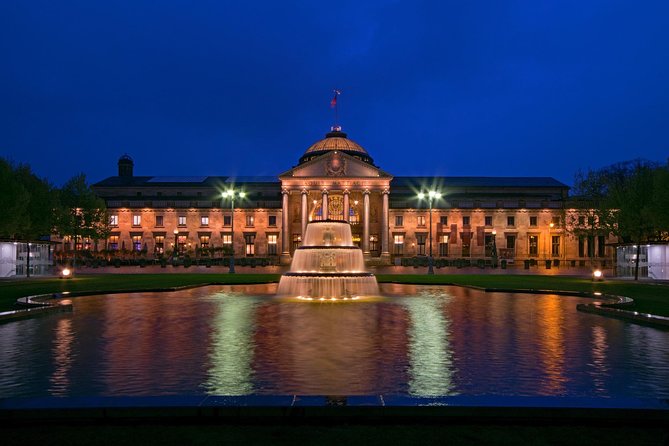 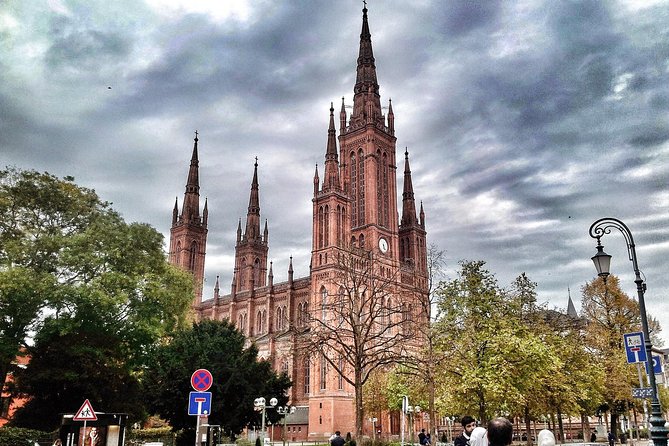 Meet your guide in front of the Kurhaus (Spa House), built between 1904 and 1907 at the request of Kaiser Wilhelm II for the price of six million Gold marks. One part of this

monumental Neo-Classical building houses the Wiesbaden Casino which is again in operation. Fyodor Dostoyevsky was inspired here to his novel “The Gambler”. The Russian writer lost his fortune while sojourning in a spa in Wiesbaden in 1865. Dostoyevsky’s statue can be found in the spa gardens nearby.Stroll along the 19th century Kurhaus Colonnade which with a length of 129 meters is the longest hall in Europe supported by pillars. It replaced the vendors’ booths and stalls that once stood there. To the other side of the lawn named „Bowling Green “you will find the Theater Colonnade with the adjacent Hessian State Theatre Wiesbaden built in 1894 and nowadays one of the most successful German language theatres.We take a peek into Wiesbaden’s hippest street; the Wilhelm Street also nicknamed the „rue“by locals. This urban boulevard is one of Germany’s most elegant shopping streets. Admire the beautiful houses in the architectural style of late Historicism.On Kochbrunnen Square in former Hotel Rose is located the Hessische Staatskanzlei, the seat of the government of the state of Hessen. Kochbrunnen – the „boiling well“– is the most famous hot spring in the city. The Romans had already used the thermal springs around the square in the first century A.D. When Wiesbaden developed into a fashionable spa town in the 19th century, a Trinkhalle (pump room) was constructed on Kranzplatz nearby where spa guests could drink thermal water tonics. The square was largely destroyed during the bombings of 1945, but the Kochbrunnen temple and the remains of the arcades tell about the former grandeur. Wiesbaden’s oldest structure from the Roman era is the Heathens’ wall close to the Roman Gate. Dating back to 240-260 A.D. it then was part of a stronghold erected by the Romans to fight off the fierce Germanic tribes. Continue towards The Gold Lane, and immerse into the historic district called

„Schiffchen“ (little ship) as it is formed like a ship’s bow. Many goldsmiths have their studios in this area. On Palace Square, view the City Palace built for the Duke of Nassau in 1840. This relatively small city palace in late classical style is today the home of the Hessian State Parliament. Grouped around Schlossplatz are also the two city halls of Wiesbaden: Old City Hall in Gothic style is the city’s oldest building dating back to 1610. New City Hall in Neo-Renaissance style from 1887 was heavily damaged in WW II and rebuilt in a simpler rendering during the 1950’s. The Palace Square is rounded off by the Neo-Gothic Marktkirche , with 98 meters Wiesbadens tallest structure. At the time of its construction in 1862 this protestant church was the largest brick building in the Duchy of Nassau.Return to Wilhelmstrasse, the „rue“, and discover the neo-classical Palace for the Heir to the Throne erected at the beginning of the 19th century for Prince William of Nassau-Weilburg. However, the prince never inhabited this palace and today it is the seat of the Chamber of Industry and Commerce. If time permits, we will take a walk on the tree-lined promenade of Warm Dam running adjacent to Wilhelm Street. This public park in the city center borders the Spa Gardens and was created in 1861 in the style of an English landscape garden and includes an idyllic pond.

Informacion Adicional
"Confirmation will be received within 48 hours of booking, subject to availability"
"Wheelchair accessible"
"This walk tour suitable for any age"
"For this walk tour no transportation needed"
"This is a private tour/activity. Only your group will participate"