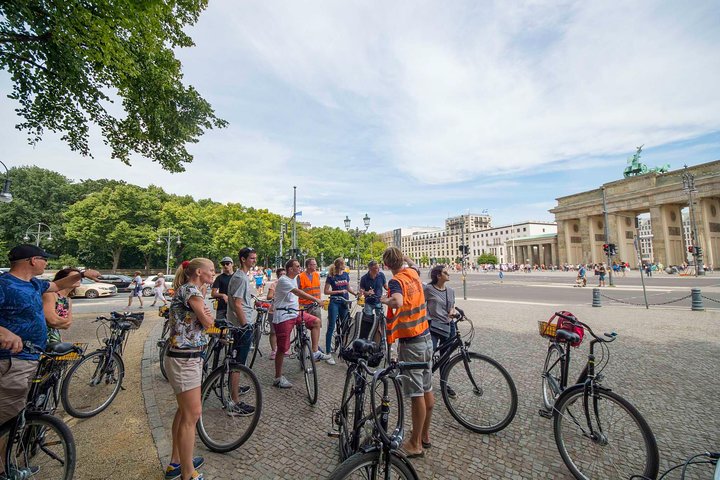 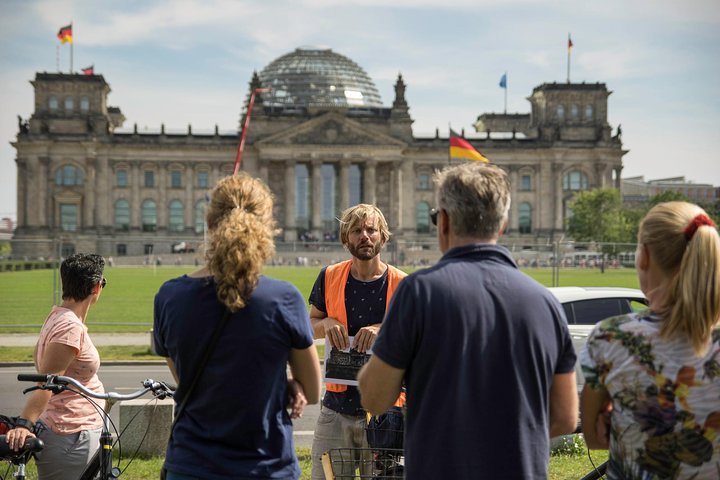 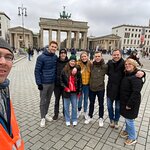 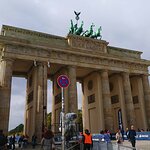 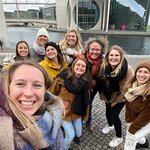 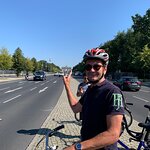 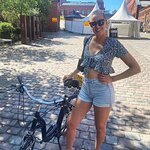 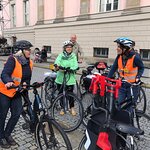 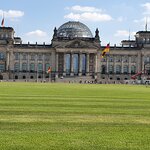 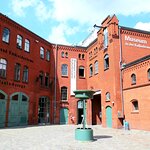 Discover Berlin on a bike in a 3.5-hour tour and get to know the city's highlights. Your knowledgeable bike guide will make sure you will have an unforgettable Berlin experience.

Bike Depot where we start end end our tours.

The Berlin Kulturbrauerei is a 25,000 m² ensemble of buildings. With its courtyards and unique architecture, it has been a listed building since 1974 and is one of the few well-preserved industrial architectural monuments in Berlin dating from the end of the 19th century.

The Brandenburg Gate in Berlin is an early classicist triumphal gate that stands on the western flank of the square Pariser Platz in Berlin's Mitte district.

The Reichstag building on Platz der Republik in Berlin has been the seat of the German Bundestag since 1999. The Federal Assembly has also met here since 1994 to elect the German Federal President.

The Memorial to the Murdered Jews of Europe, Holocaust Memorial for short, in the historical centre of Berlin commemorates the approximately 6 million Jews murdered under the reign of Adolf Hitler and the National Socialists.

A centrally located parc where you will find the Berlin Zoological Garden, the Victory Column with its winged statue of Victoria and the Café am Neuen See.

Checkpoint Charlie was one of Berlin's border crossings through the Berlin Wall between 1961 and 1990, connecting the Soviet and American sectors in Friedrichstrasse between Zimmerstrasse and Kochstrasse, thus linking the East Berlin district of Mitte with the West Berlin district of Kreuzberg.

The Gendarmenmarkt is a square named after the cuirassier regiment Gens d'armes which originally settled here in the Berlin district Mitte of the district of the same name. It was built during the expansion of the city in 1688, was destroyed in the Second World War and rebuilt in 1976-1993.

It was founded in 1740 as part of the Forum Fridericianum planned by Frederick II and carried out by Georg Wenzeslaus von Knobelsdorff. It is the place where the Nazis burned bookes in 1938. The Staatsoper Unter den Linden is located on the square named after August Bebel since 1947.

The Berliner Dom am Lustgarten on Museum Island is a Protestant church and dynastic burial place in Berlin's Mitte district.

Informacion Adicional
"Confirmation will be received at time of booking"
"Infant seats available"
"Operates in all weather conditions, please dress appropriately"
"Minimum age is 6 years"
"Not wheelchair accessible"
"Near public transportation"
"No heart problems or other serious medical conditions"
"Travelers should have a moderate physical fitness level"
"This experience requires good weather. If it’s canceled due to poor weather, you’ll be offered a different date or a full refund"
"This experience requires a minimum number of travelers. If it’s canceled because the minimum isn’t met, you’ll be offered a different date/experience or a full refund"
"This tour/activity will have a maximum of 12 travelers"
"Face masks provided for travelers"
"Hand sanitizer available to travelers and staff"
"Regularly sanitized high-traffic areas"
"Gear/equipment sanitized between use"
"Transportation vehicles regularly sanitized"
"Guides required to regularly wash hands"