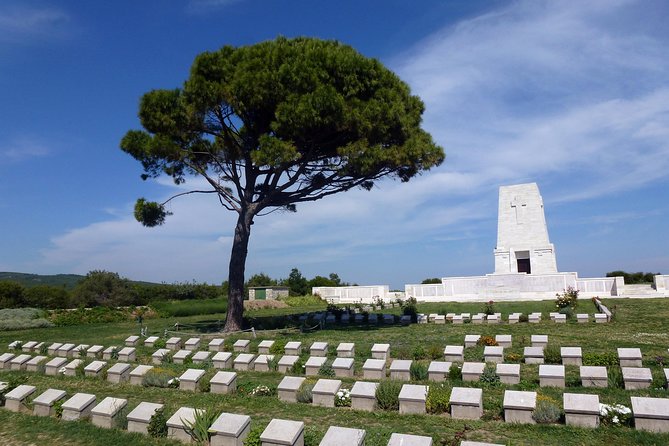 The name Gallipoli has long been associated with sacrifice and heroism, a place where history and legend have combined. Explore ANZAC battlefields and learn about the events of 1915 on this half day Gallipoli tour.

Visit Brighton Beach, the intended site of the landing on April 25. See Beach Cemetery where John Simpson Kirkpatrick ( The Donkey Man ) is buried

Visit Ariburnu Cemetery on the northern tip of ANZAC Cove & The ANZAC Commemorative Site, where the annual Dawn Service is held

Visit The 57. Regiment Turkish Memorial, where you will be given the Turkish perspective. The Nek, and Chunuk Bair where New Zealand Memorial is located

Your tour starts at the door of your hotel in Çanakkale at around 11:30am, where you will be met by our passenger escort and accompanied to the ferry terminal, where you will board the waiting ferry for the short trip across the Dardanelles Strait.

On arrival in the town of Eceabat, once the ancient city of Madytos, located on the shores of the Dardanelles, you will be able to enjoy lunch at a local restaurant.

After lunch, you board our coach for the 15 minute trip out to the battlefields, crossing the Gallipoli Peninsula and driving to the Aegean coast, and one of the most famous beaches in modern history – ANZAC Cove.

The first part of your tour takes in the area where the men of the Australian and New Zealand Army Corps (ANZAC) landed on April 25 1915, with our experienced guide giving you both background to the campaign leading up to the landing as well as describing the events of that historic day and beyond.

Among the highlights of the first part of the tour are standing above ANZAC Cove, site of the initial landing, and visiting the grave of John Simpson Kirkpatrick, the stretcher bearer famed as the Man with the Donkey for carrying wounded soldiers to a medical aid post using a stolen donkey.

Moving from the beaches up into the hills above, the tour then traces the line of the battle along what became known as Second Ridge, where the Allied advance was halted that first day of fighting by the Ottoman defenders and where the front line was located for the next seven months.

The tour follows the road along the top of Second Ridge, with the lines of Allied and Turkish trenches still clear on either side. The tours stops at a number of cemeteries and memorials, including the Australian memorial at Lone Pine – where almost 5000 Australians who have no known grave are commemorated – and Johnston’s Jolly Cemetery where we walk through the now abandoned trenches and tunnel entrances.

The final stop on the tour is Chunuk Bair, one of the highest points on the peninsula, and site of the New Zealand national memorial. The hill was captured in August by New Zealand troops and held for two days before being recaptured from the Allies by Ottoman forces under the personal command of Mustafa Kemal – later the president of modern Turkey.

Chunuk Bair was the scene of some of the fiercest fighting of the campaign, with the names of more than 850 New Zealand soldiers who fell in the area commemorated on the memorial. The recapture of Chunuk Bair effectively ended Allied hopes of victory at Gallipoli and so is a fitting place for our tour to close.

At the conclusion of the tour, our bus will return to Eceabat. Those guests wishing to travel to Istanbul will be able to take our specially configured bus, designed to provide more space and greater leg room for your comfort, for the approximately five hour trip.

For those guests wishing to return to Çanakkale, you will be escorted to the nearby ferry for the trip back across the Dardanelles.

Informacion Adicional
"Confirmation will be received at time of booking"
"Not wheelchair accessible"
"Stroller accessible"
"Infants must sit on laps"
"Most travelers can participate"
"This experience requires good weather. If it’s canceled due to poor weather, you’ll be offered a different date or a full refund"
"This tour/activity will have a maximum of 2 travelers"

Traveler pickup is offered
According to the locaiton of the hotel meeting point can be arranged.