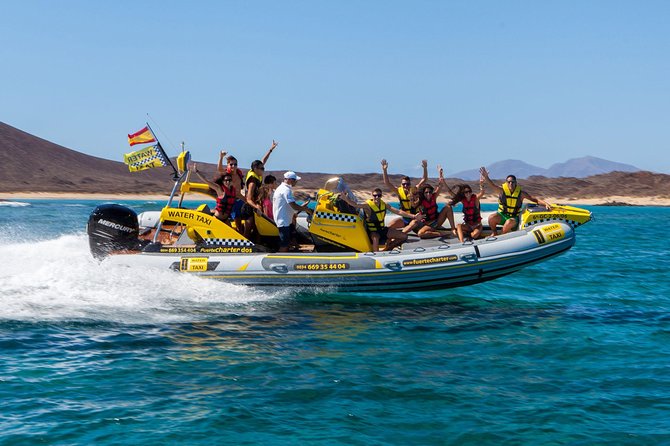 The water taxi to Los Lobos brings you in a short time from Corralejo to Los Lobos what is proxi. 2km away. daily taxi from and to corralejo and the harbour of Los Lobos.

The island as seen from the town of Corralejo

The island is accessible to tourists via a short ferry ride from Corralejo, in the north of Fuerteventura. It has day facilities and weekend homes of local fishermen. At the northeastern end of the island is the Punta Martiño Lighthouse, the lighthouse keeper and his family were the last permanent inhabitants of Lobos, until the light was automated in the 1960s.

Aerial view of Lobos Island, with the harbour of Corralejo, Fuerteventura Island, in the top left corner

In 1405, Lobos Island served as resupply base for Jean de Béthencourt's conquest of Fuerteventura.

Lobos Island (Wolves Island) was named for the large number of sea wolves, also called monk seals, that once lived there. The monk seals were the island's only inhabitants when it was discovered by the Spanish conquerors of the Canaries archipelago in the fifteenth century.

Informacion Adicional
"Confirmation will be received within 48 hours of booking, subject to availability"
"A current valid passport is required on the day of travel"
"Children must be accompanied by an adult"
"Not wheelchair accessible"
"Near public transportation"
"Most travelers can participate"
"This experience requires good weather. If it’s canceled due to poor weather, you’ll be offered a different date or a full refund"
"This tour/activity will have a maximum of 12 travelers"