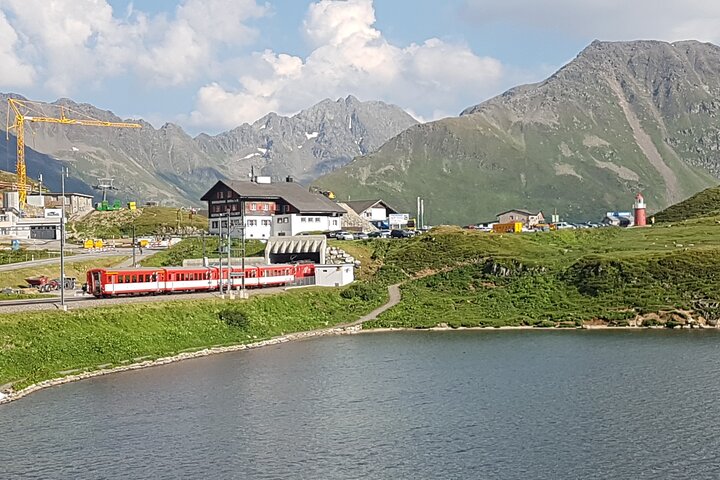 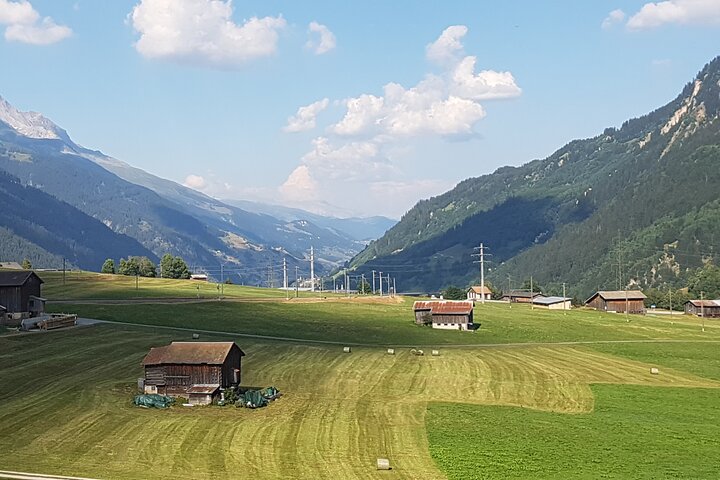 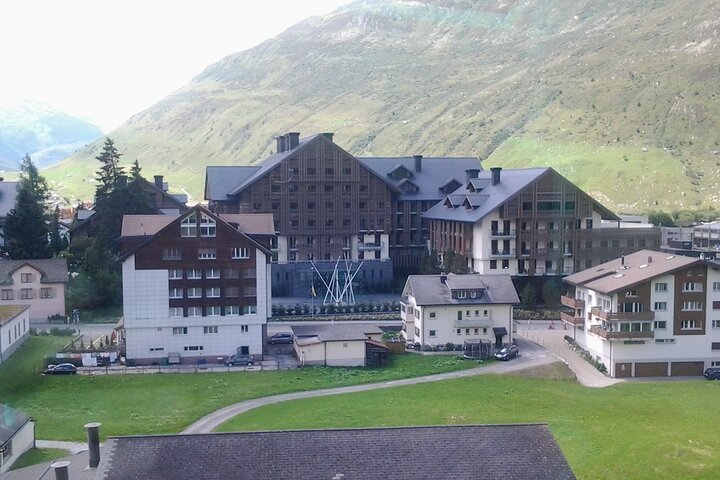 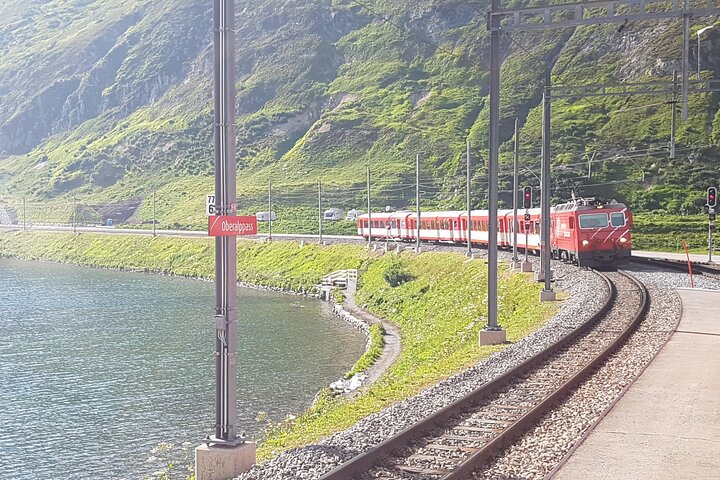 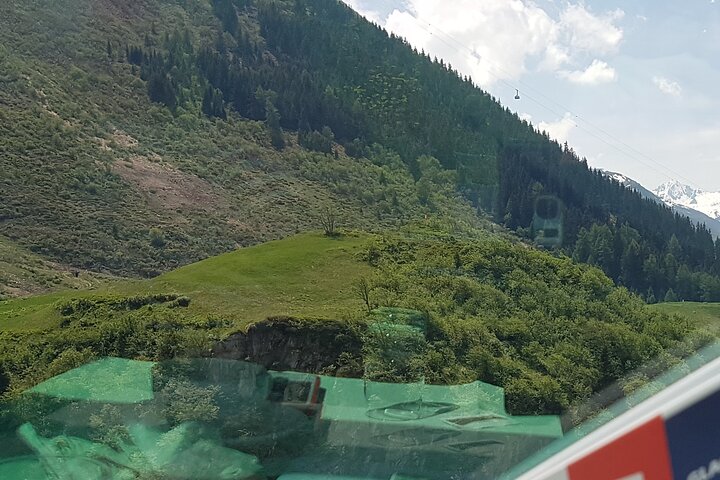 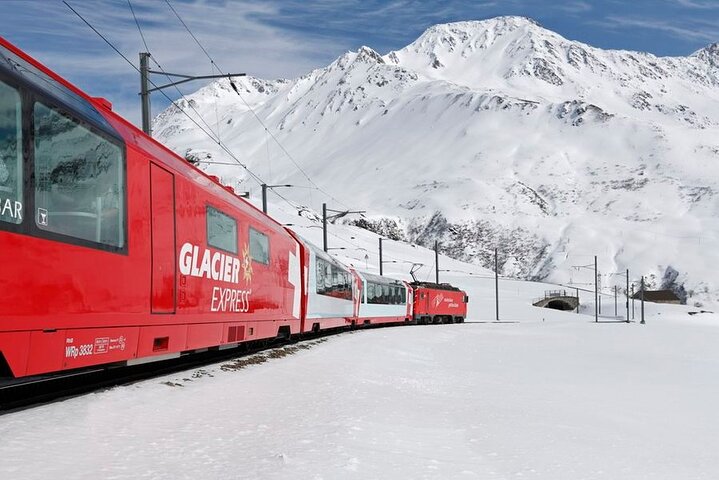 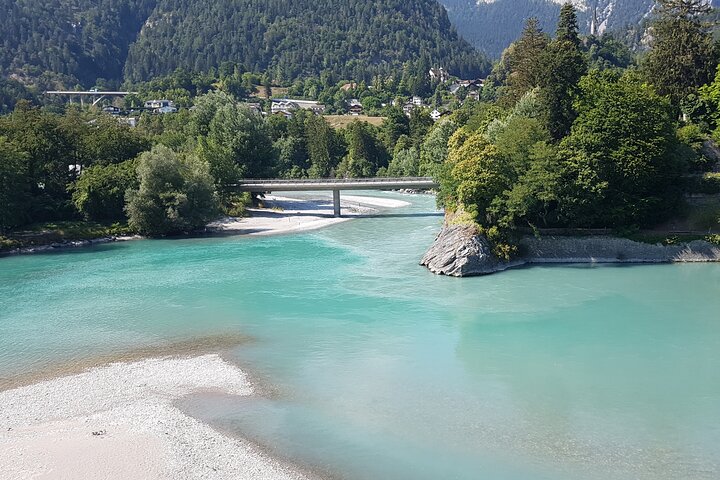 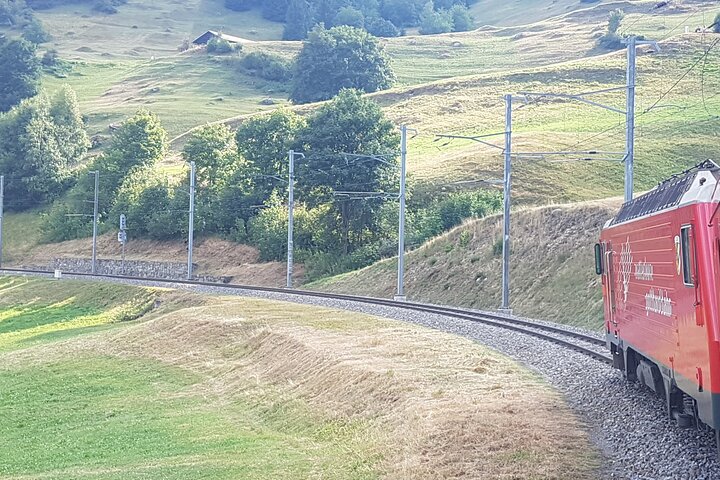 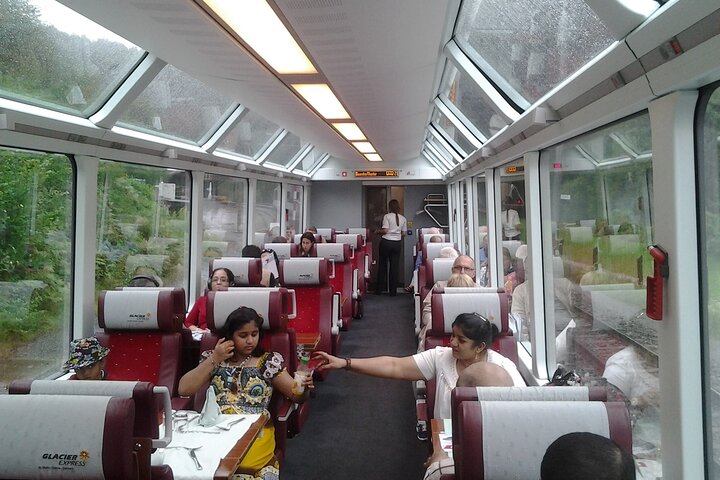 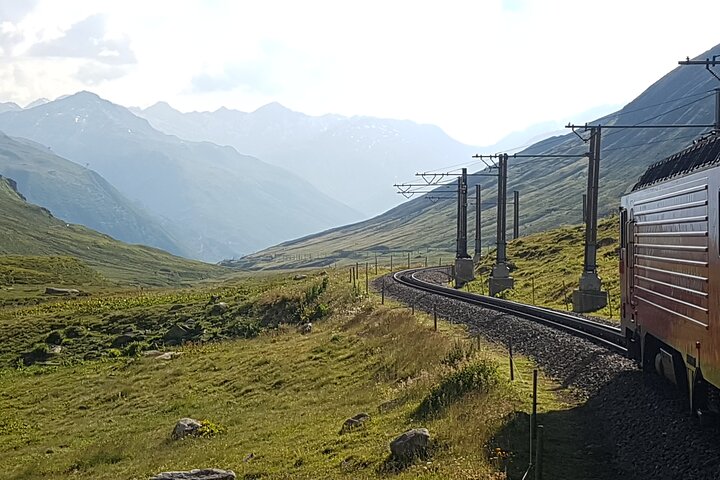 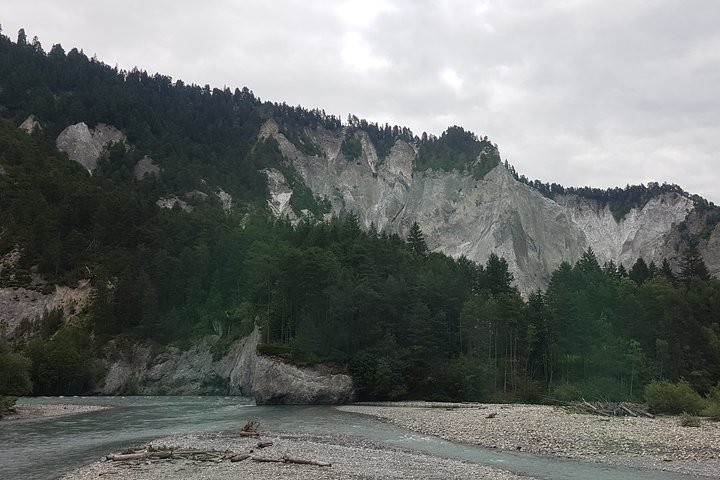 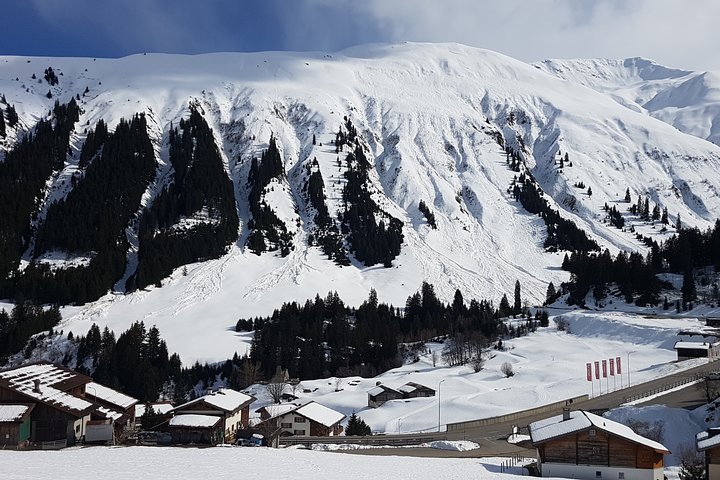 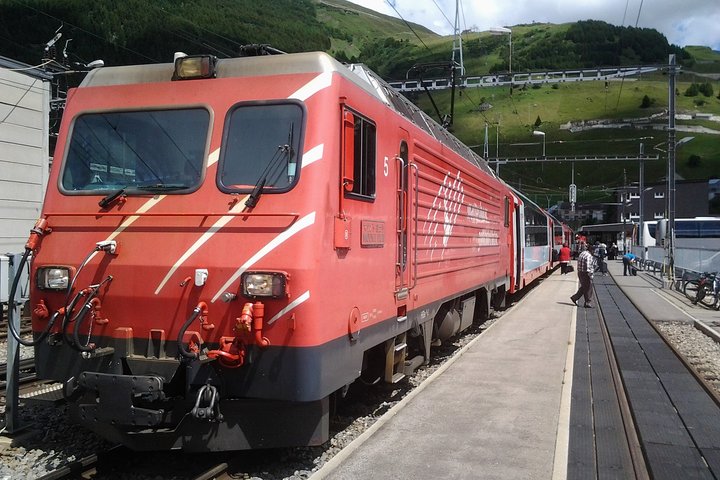 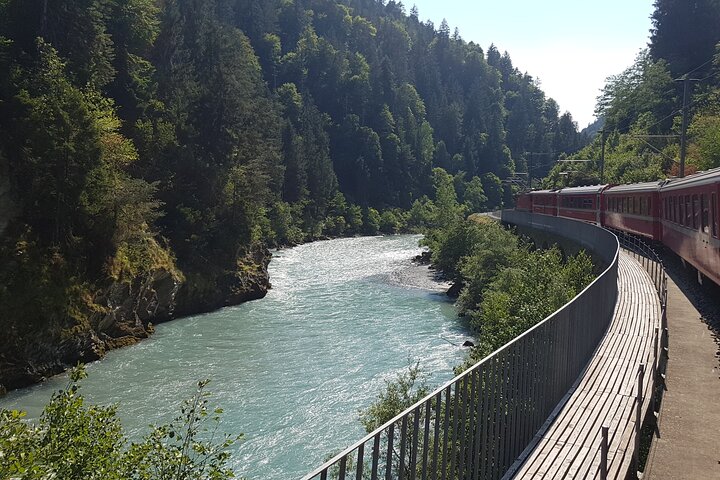 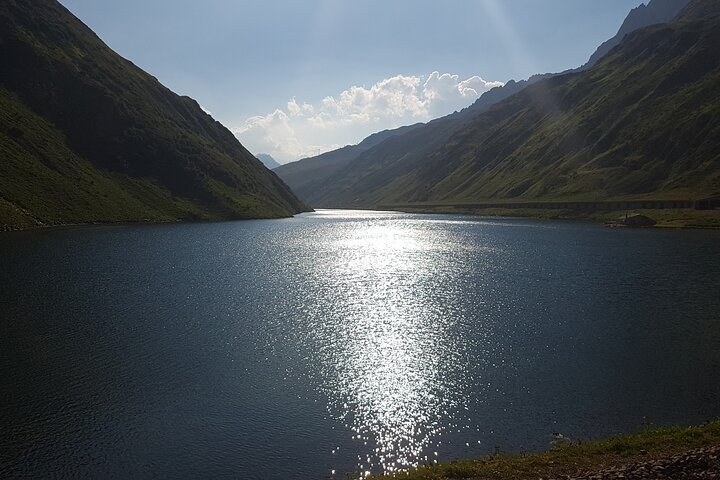 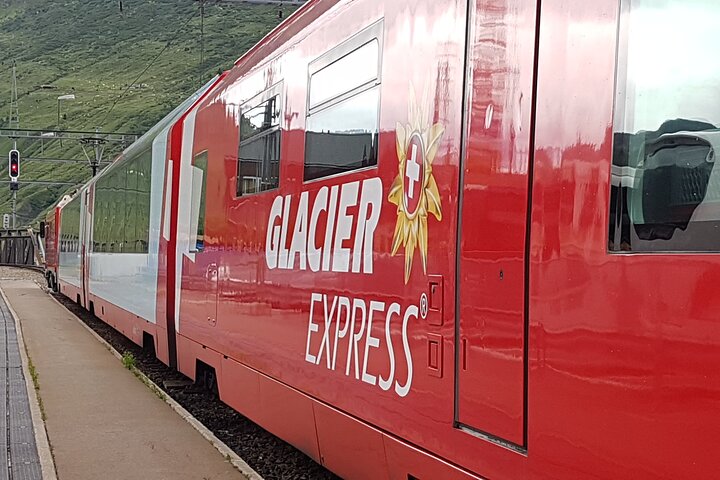 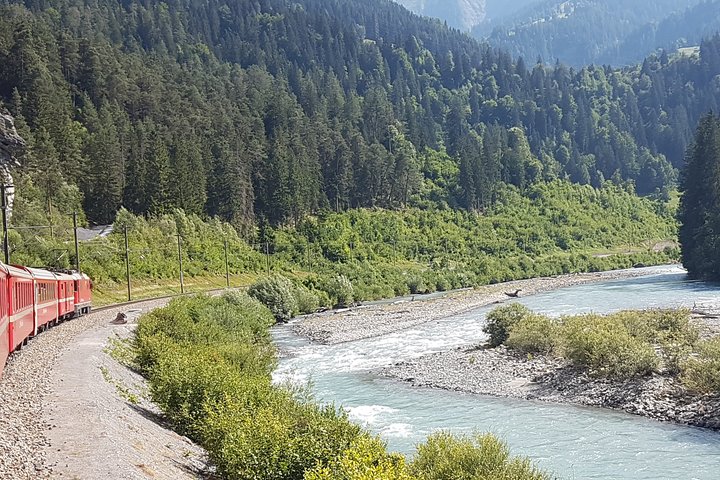 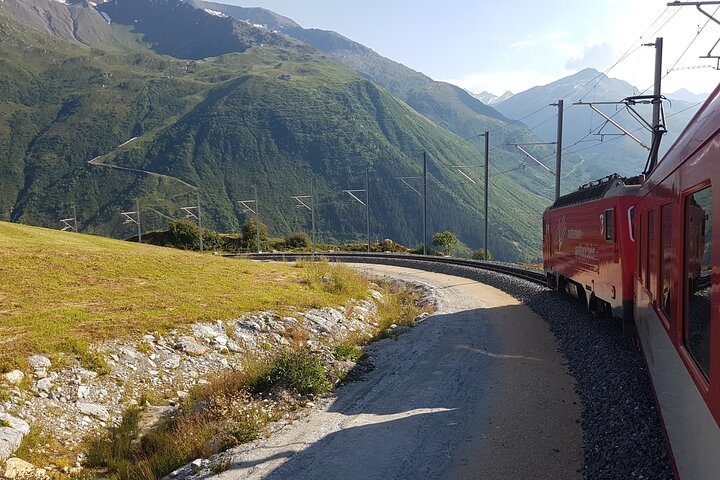 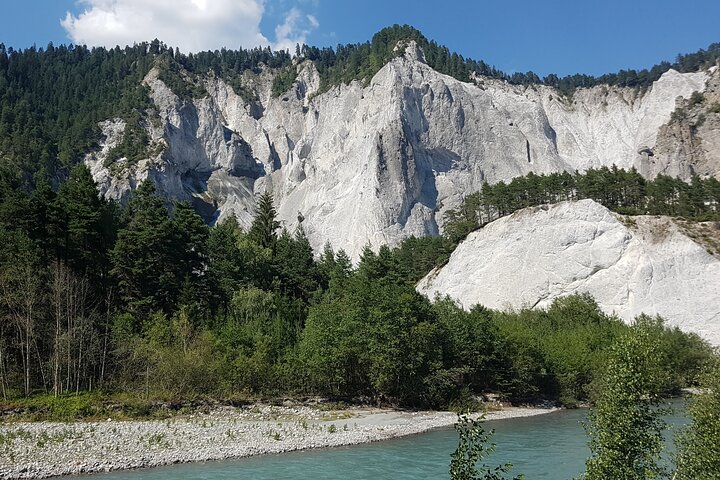 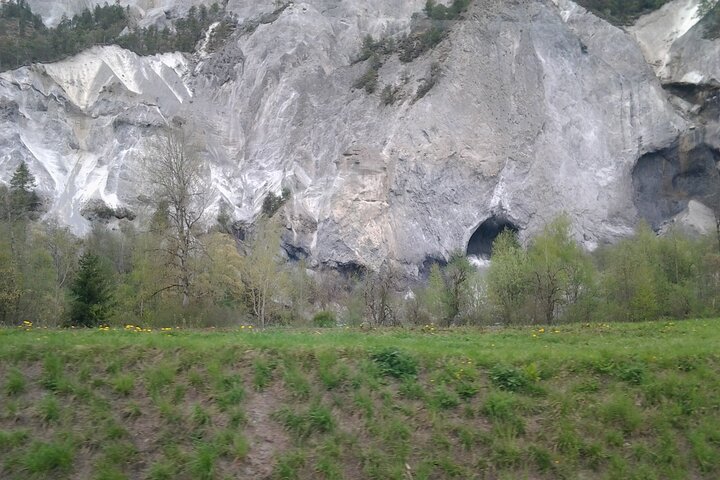 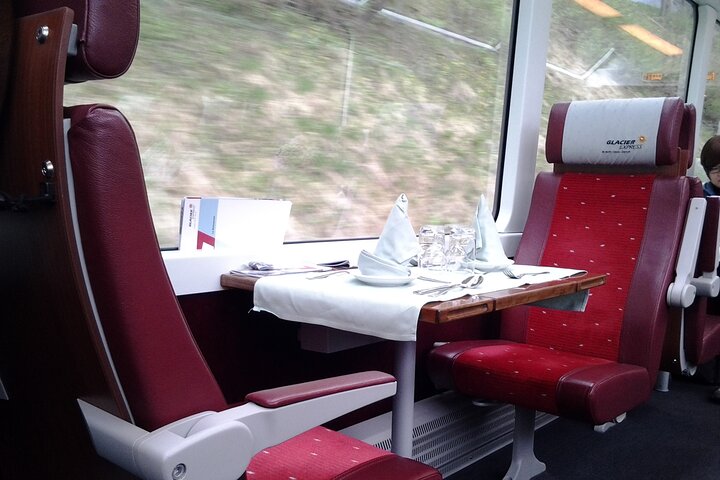 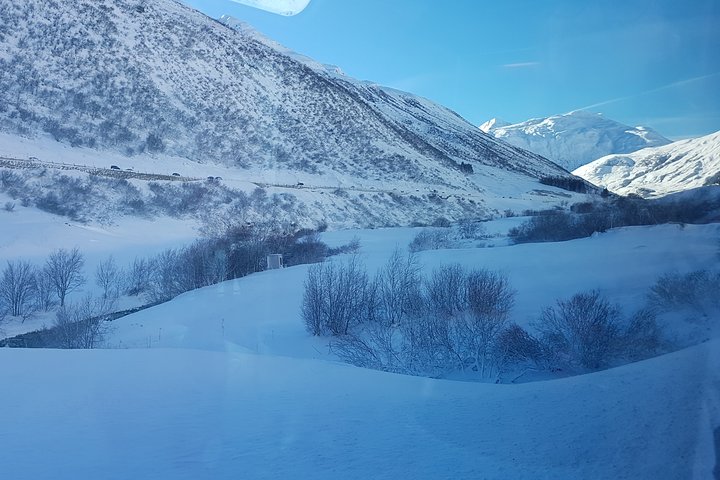 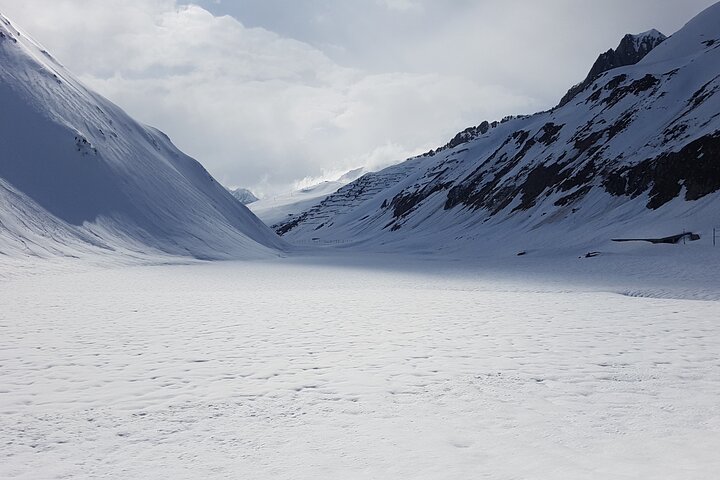 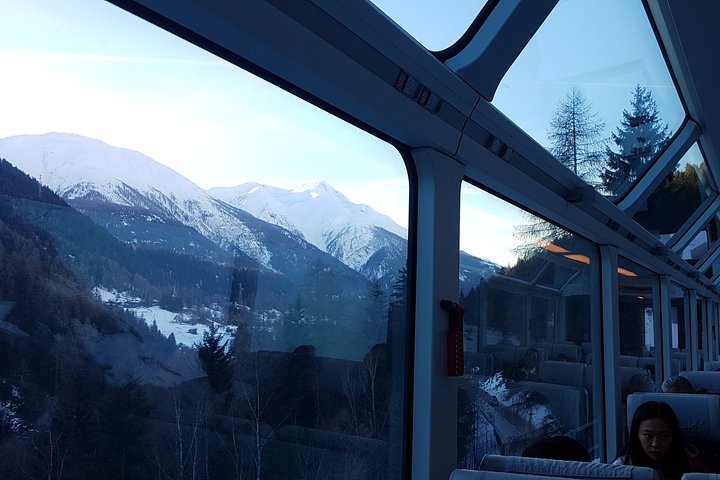 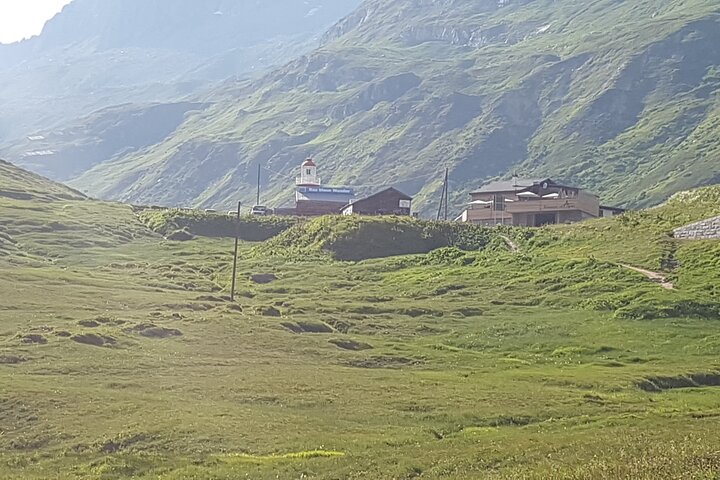 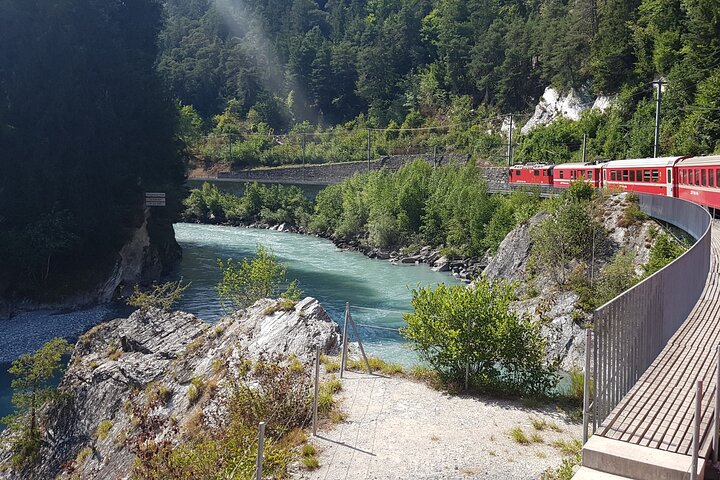 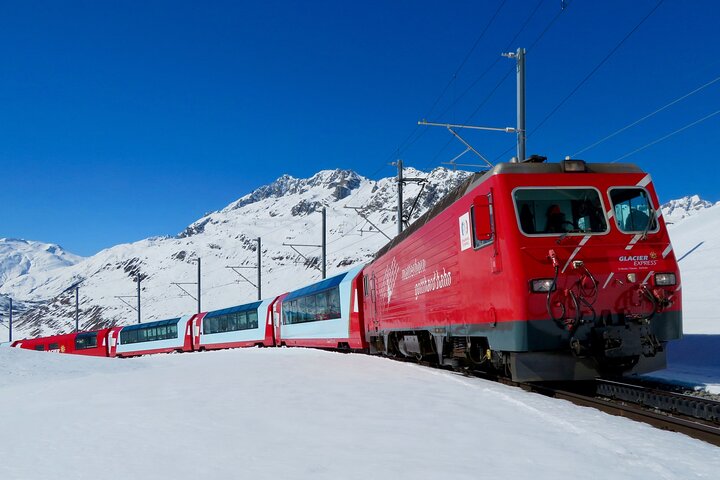 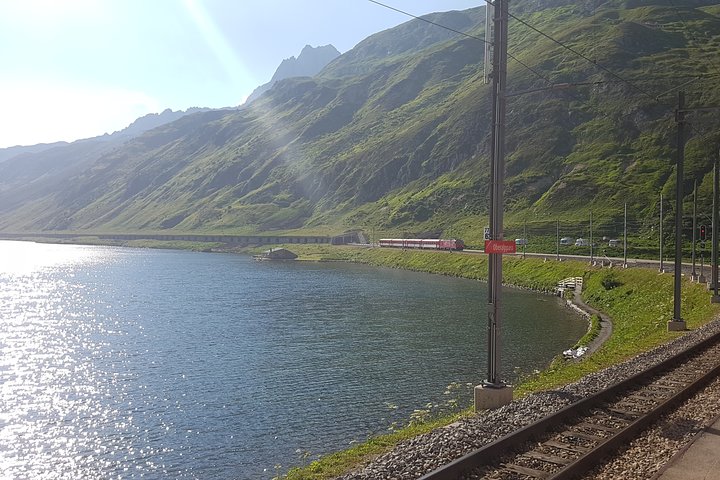 This is a self-guided tour and you may travel fully independent on the Glacier Express panoramic train.

With our detailed travel instructions you travel to Chur, in the Glacier Express train to Birg and back to your origin point. On the return travel. you may spend time in Brig or Bern according your preferences.

You will get the travel booklet and all necessary personalized tickets by e-mail after your booking - no mobile device necessary during the tour.

On board the Glacier Express train, a audio guide in 8 different languagues is available for all travellers.

The train will enter the "Swiss Grand Canyon", the place where the Rhine river flows.

Ilanz is a former municipality in the district of Surselva in the Swiss canton of Graubünden.

The skiing and summer tourism resort high up in the Rhine valley is the site of one of the oldest Benedictine monasteries in Switzerland. The monastery dates back to 720, its huge actual complex dates from 1696 to 1712.

Oberalp Pass (el. 2044 m.) is a high mountain pass in the Swiss Alps connecting the cantons of Graubünden and Uri between Disentis and Andermatt.

Andermatt is a mountain village and municipality in the canton of Uri in Switzerland. At an altitude of 1437 meters above sea level, Andermatt is located at the center of the Saint-Gotthard Massif and the historical center cross of north-south and east-west traverses of Switzerland.

The Furka Base Tunnel is a Swiss railway base tunnel on the Matterhorn Gotthard Bahn's Furka–Oberalp line, a west-east railway connecting the cantons of Valais and Uri. Its west portal lies east of Oberwald (VS), at 1,390 m (4,560 ft) above sea level and its east portal lies south of Realp (UR), at 1,550 m (5,090 ft). The base tunnel is 15,407 m (50,548 ft) in length, and replaced the previous track that climbed to an apex of 2,160 m (7,090 ft) above sea level, thus allowing year-round service through service on the Furka–Oberalp line.

The district of Goms (French: District de Conches) is a district of the canton of Valais in Switzerland. It covers a larger area than its geographical counterpart, the geographical region of Goms, namely the upper most part of the Rhône valley between its source and Brig

César Ritzwas a Swiss hotelier and founder of several hotels, most famously the Hôtel Ritz in Paris and the Ritz and Carlton Hotels in London (the forerunners of the modern Ritz-Carlton Hotel Company).
Ritz was born in the Swiss village of Niederwald, the youngest of 13 children in a poor peasant family. At the age of twelve he was sent as a boarder to the Jesuit college at Sion, and at fifteen, having shown only vaguely artistic leanings, was apprenticed as a sommelier at a hotel in Brig

Brig, officially Brig-Glis is a historic town and a municipality in the district of Brig in the canton of Valais in Switzerland.
The current municipality was formed in 1972 through the merger of Brig (city), Brigerbad and Glis.
Together with other Alpine towns Brig-Glis engages in the Alpine Town of the Year Association for the implementation of the Alpine Convention to achieve sustainable development in the Alpine Arc.

Pass By: Lotschberg Base Tunnel, Between Frutigen, Berne and Raron, Valais, Frutigen 3718 Switzerland

The Lötschberg Base Tunnel (LBT) is a 34.57-kilometre (21.48 mi) railway base tunnel on the BLS AG's Lötschberg line cutting through the Bernese Alps of Switzerland some 400 m (1,312 ft) below the existing Lötschberg Tunnel. It runs between Frutigen, Berne, and Raron, Valais.

Lake Thun is an Alpine lake in the Bernese Oberland in Switzerland named after the city of Thun, on its northern shore.

Informacion Adicional
"Confirmation will be received at time of booking"
"Infants must sit on laps"
"Service animals allowed"
"Near public transportation"
"Stroller accessible"
"Not wheelchair accessible"
"Most travelers can participate"
"This is a private tour/activity. Only your group will participate"
"Hand sanitizer available to travelers and staff"
"Regularly sanitized high-traffic areas"
"Transportation vehicles regularly sanitized"
"Face masks mandatory in public transportation and in stores/shops"