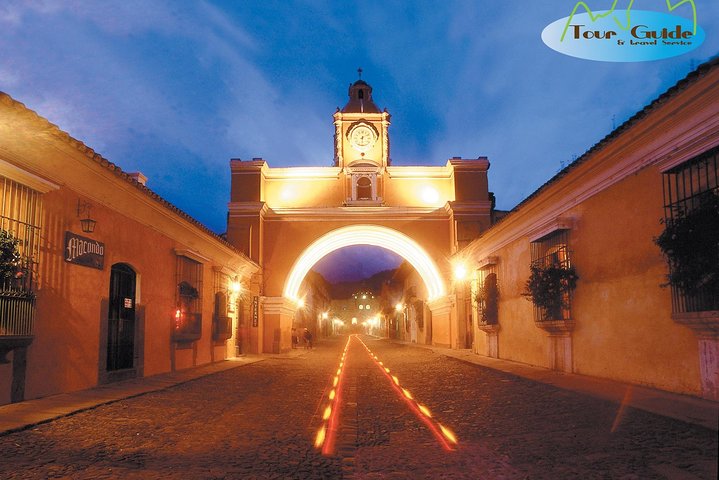 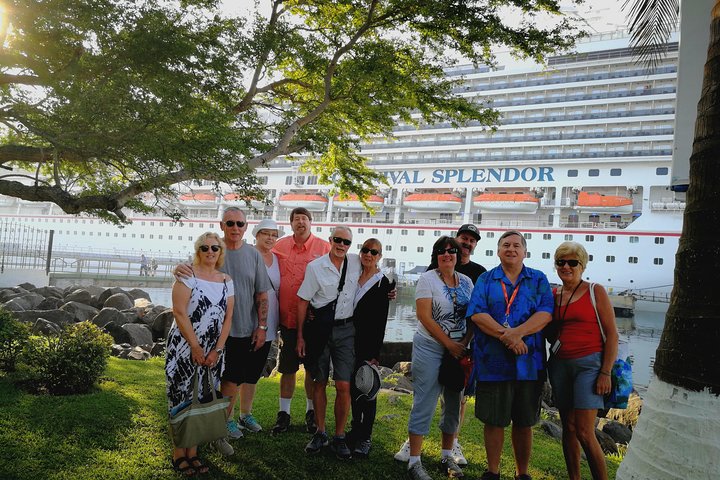 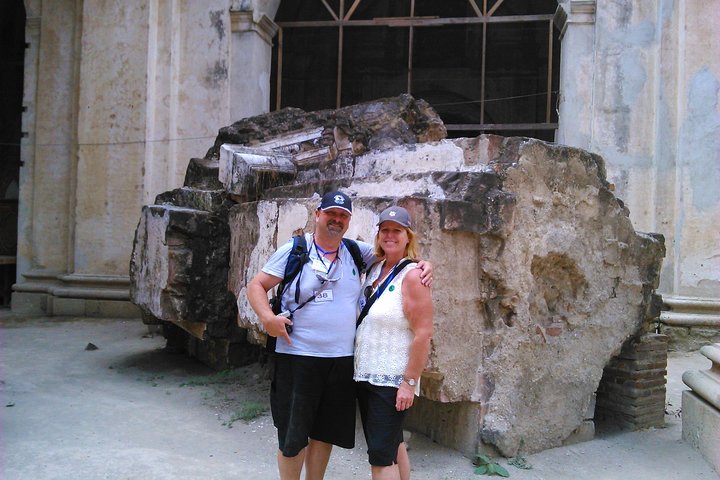 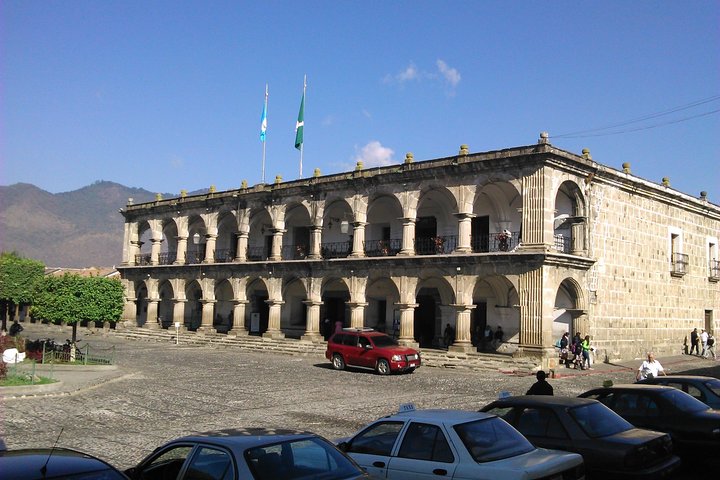 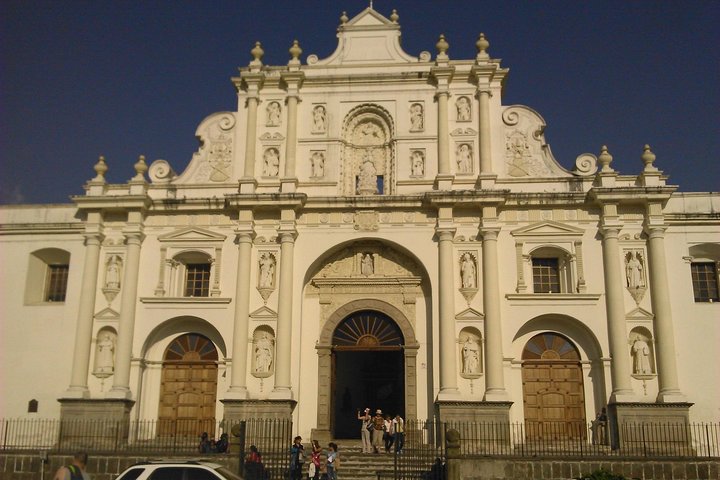 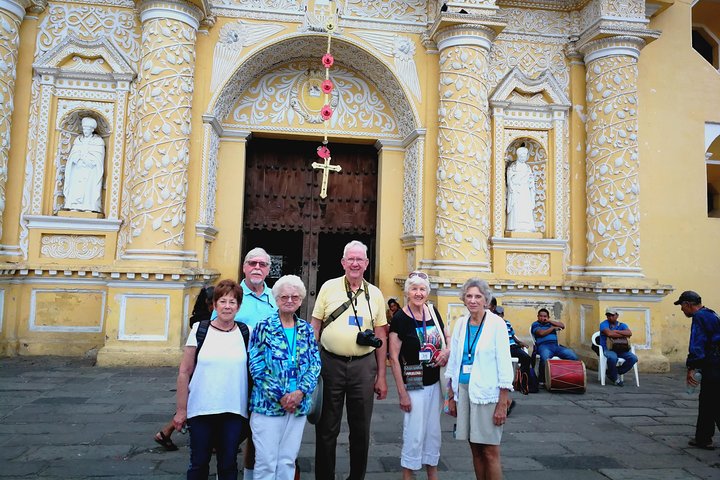 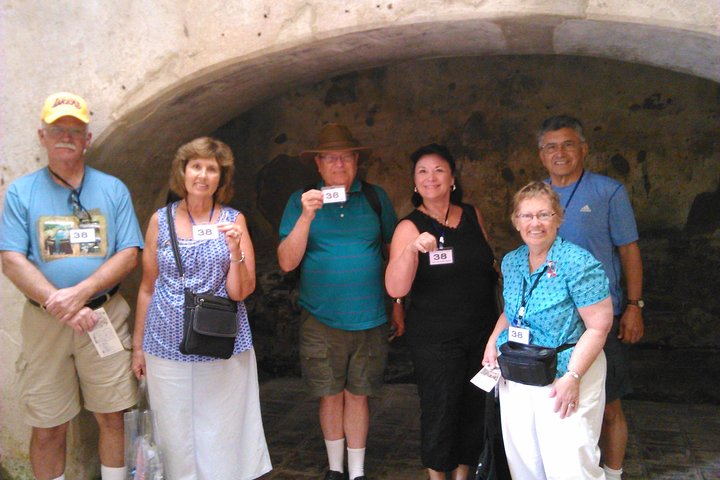 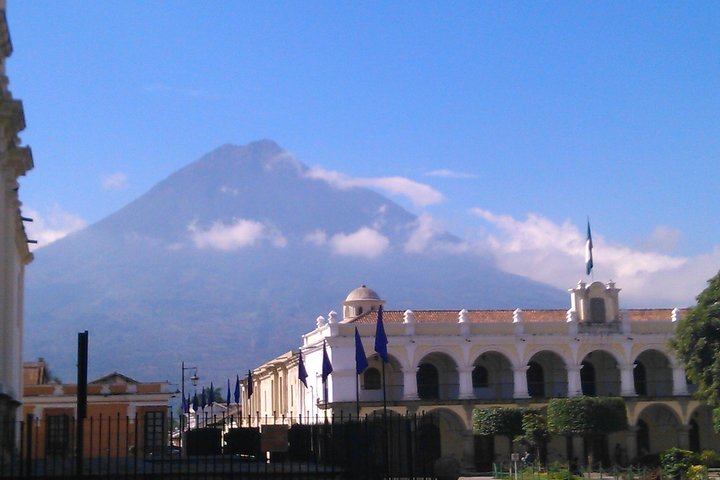 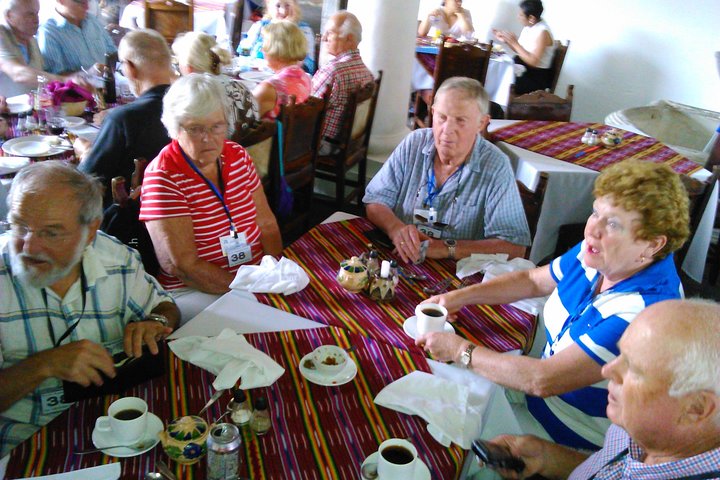 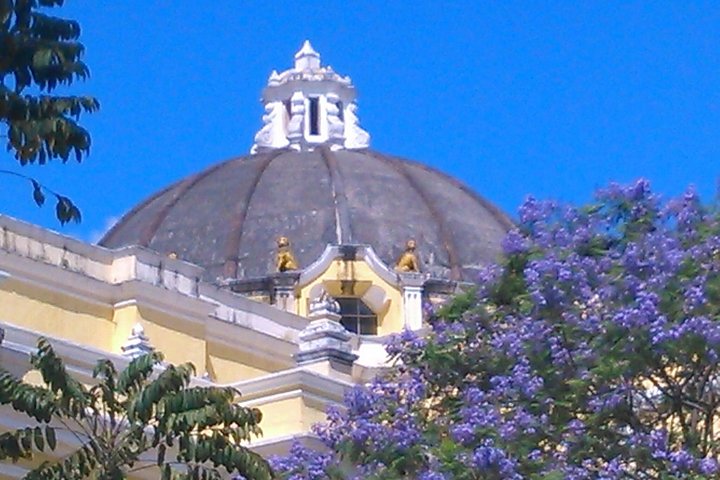 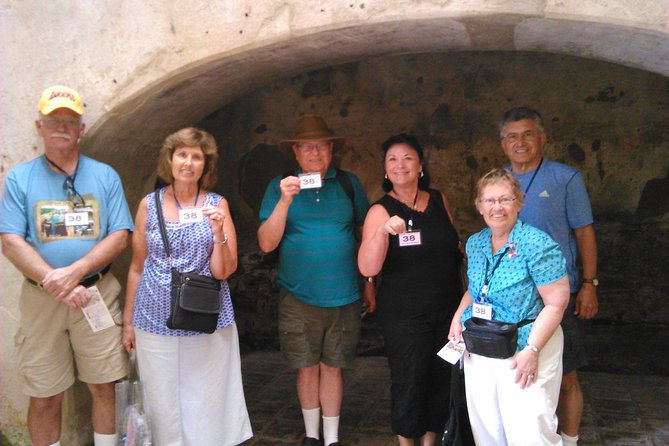 See the sights of Antigua City, coffee farm, shopping, volcanoes and colonial architecture during this 6-hour tour. Get you onboard your air conditioned transportation at the port and your exploration of Guatemala begins. As you head towards Antigua City, your guide will give you interesting information not only about the city but also his native Guatemala, the cultural and history. You will pass the beautiful countryside with views of the famous volcanoes. During this excursion you will have a lot of photo opportunities

Antigua Guatemala, commonly referred to as just Antigua or la Antigua, is a city in the central highlands of Guatemala known for its preserved Spanish Baroque-influenced architecture as well as a number of ruins of colonial churches. It served as the capital of the Kingdom of Guatemala. It has been designated a UNESCO World Heritage site.

Stones and rubble were used for the first construction of the Cathedral of San José, which were part of the first capital of Guatemala. Although it was inaugurated in 1545, its construction was not completed, and it was interrupted several times over the years due to numerous earthquakes and the difficulty to transport the materials for the construction.

Due to the quality of the materials and engineering problems, the church was demolished in 1668 and the construction of a new cathedral began on April 7, 1669, a project led by Juan Pascual and the architect José de Porres, with the help of the engineer and sculptor Martin de Andújar Cantos who was known for his work of religious sculptures. The project ended in 1680.

Parque Central is as old as the city, but while everything in the city suggests that for once time stood still, this park continues to evolve. Today, it’s one of the best places to people-watch and a favorite meeting place for locals and tourists alike.

From the city’s inception, the plaza was designed to be the center of social life. For a long time, historians have thought that Italian architect Juan Bautista Antonelli designed the layout of the city – historical records cast doubt on this assertion – Antonelli never traveled to the Americas. In any event, the founders conceived the capital in the classical colonial Spanish design – the main plaza at the center of a grid layout.

When Franciscan missionaries arrived in Guatemala from Spain in 1530 they were assigned 120 villages by the civil authorities. They were the first to move to the Panchoy Valley in 1541 where they built a church at the site of today's School of Christ (Escuela de Cristo). This chapel was severely damaged in 1565 and during the next ten years donations were collected to build a new sanctuary located two blocks away in 1579. Parts of this construction, maybe the only ones in Antigua which date back to the 16th century, can be appreciated at one side of today's sanctuary. San Francisco el Grande became a significant religious and cultural center for the whole region. Theology, law, philosophy, physics and mathematics were taught at San Buenaventury College, located in today's monastery ruins. The college also favoured painters of the colonial era such as Cristóbal de Villalpando, Thomas de Merlo and Alonzo de la Paz.

The Santa Catalina Arch is one of the distinguishable landmarks in Antigua Guatemala, Guatemala, located on 5th Avenue North. Built in the 17th century, it originally connected the Santa Catalina convent to a school, allowing the cloistered nuns to pass from one building to the other without going out on the street. A clock on top was added in the era of the Central American Federation, in the 1830s.

The Mercedarians were the first to establish a male monastery at the former Santiago de Guatemala. The cross in stone at the atrium and the rooms behind the main altar are the oldest structures in La Merced and date from the seventeenth century. In 1749 Juan de Dios Estrada was commissioned with the construction of the luxurious sanctuary and cloister. He erected a building of low height designed to withstand earthquakes based on the experiences of the tremor of 1751. Arches and columns are wider to cope with the quakes. It was opened in 1767.

Stop At: Jade Maya - The Original Jade factory and Museum, 4a. Calle Oriente No. 34, Antigua 03001 Guatemala

adeite Jade was discovered approximately 3,000 years ago by an early Mesoamerican culture, The Olmecs. They became expert lapidary artists and carved jade into beautiful statues, ceremonial ornaments and objects for their rituals. Their descendants, The Maya, used it as ornaments and jewelry for nobles and priests. Other cultures such as the Aztecs continued to work jade, up until the time of the Spanish Conquest.

The Ancient Maya, builders of large cities, extensive traders and astronomers who developed a very accurate calendar, also revered jade as their most important possession. Only the very wealthy and powerful could afford to wear jade both in this life and in the after life. The love for jade and the knowledge of its source was lost to the Americas at the time of the Spanish conquest. The Spaniards subjugated the ancient cultures and influenced them to value what the conquerors valued – gold. o for more than 400 years, jade was forgotten in the Americas.

Informacion Adicional
"Confirmation will be received at time of booking"
"Not wheelchair accessible"
"At time of booking, cruise ship passengers must provide the following information at time of booking: ship name, docking time, disembarkation time and re-boarding time"
"Minimum age is 18 years"
"Refunds will not be issued if tour/activity is missed due to late or non-arrival of cruise ship"
"Subject to favorable weather conditions. If canceled due to poor weather, you will be given the option of an alternative date but not full refund"
"The duration of transfers are approximate, the exact duration will depend on the time of day and traffic conditions"
"Stroller accessible"
"Service animals allowed"
"Near public transportation"
"Infant seats available"
"Most travelers can participate"
"This experience requires good weather. If it’s canceled due to poor weather, you’ll be offered a different date or a full refund"
"This tour/activity will have a maximum of 15 travelers"
"Face masks required for travelers in public areas"
"Face masks required for guides in public areas"
"Face masks provided for travelers"
"Hand sanitizer available to travelers and staff"
"Social distancing enforced throughout experience"
"Regularly sanitized high-traffic areas"
"Gear/equipment sanitized between use"
"Transportation vehicles regularly sanitized"
"Guides required to regularly wash hands"
"Regular temperature checks for staff"
"Temperature checks for travelers upon arrival"
"Contactless payments for gratuities and add-ons"
"Proof of COVID-19 vaccination required for travelers"
"COVID-19 vaccination required for guides"
"Our cruise staff has taken several pieces of training in these months and is highly prepared to receive passengers from cruises to Guatemala, we have all the hygiene measures imposed by the World Health Organization and the Government of Guatemala, and the Tourism Commission of Guatemala."

Traveler pickup is offered
Please be 15 minutes before departure time, to leave on time.