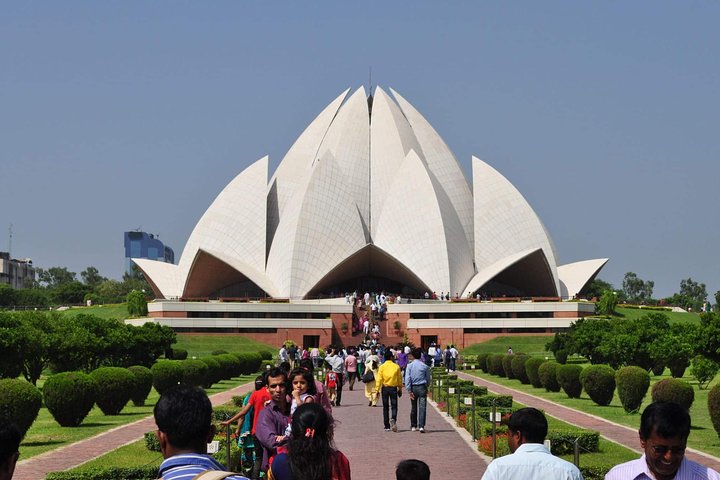 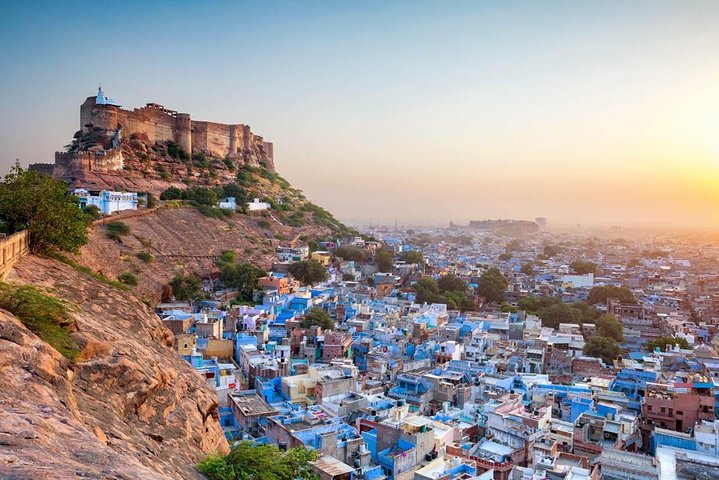 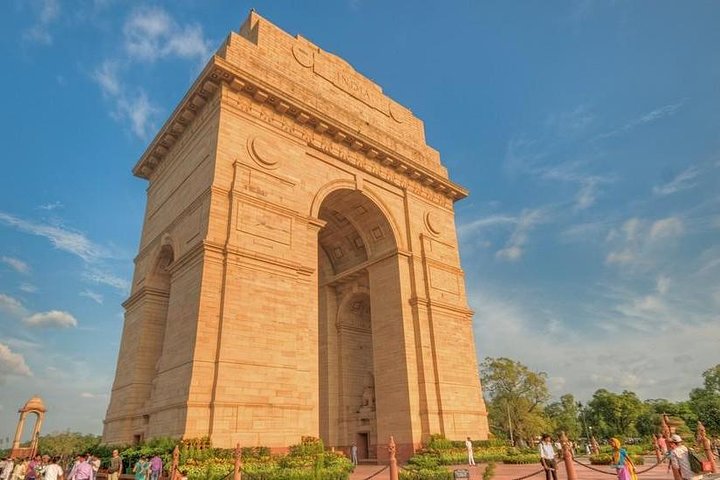 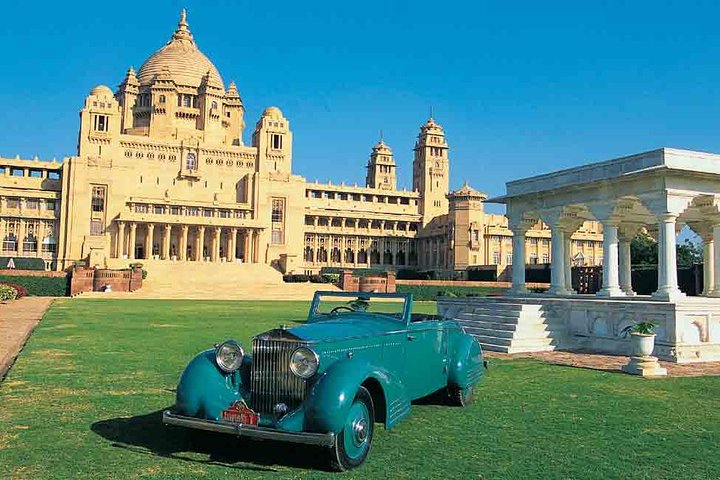 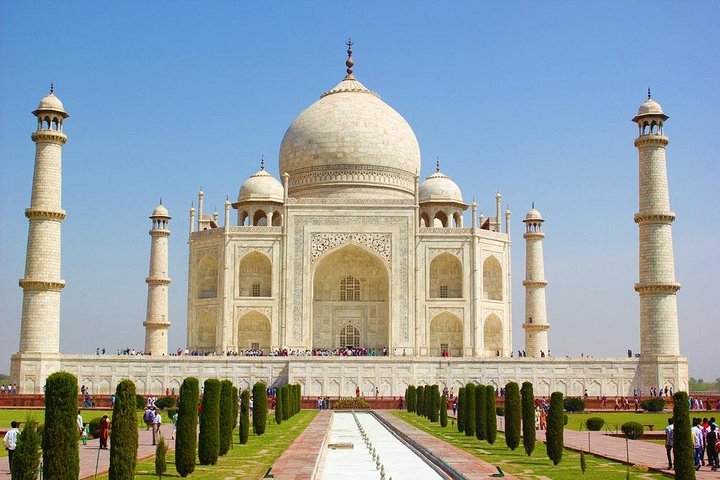 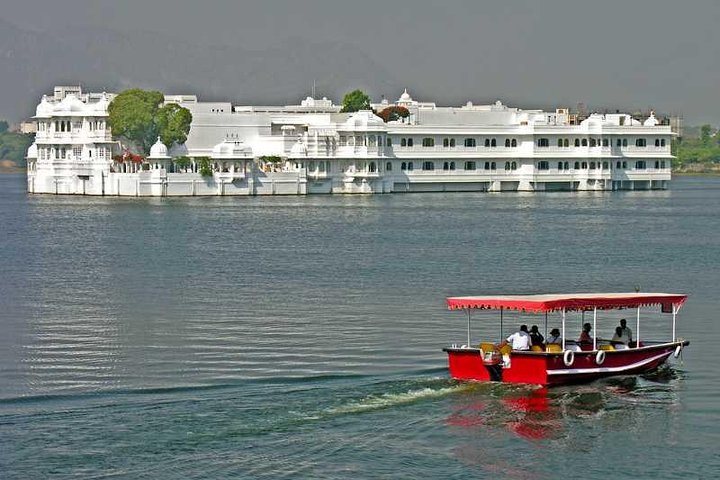 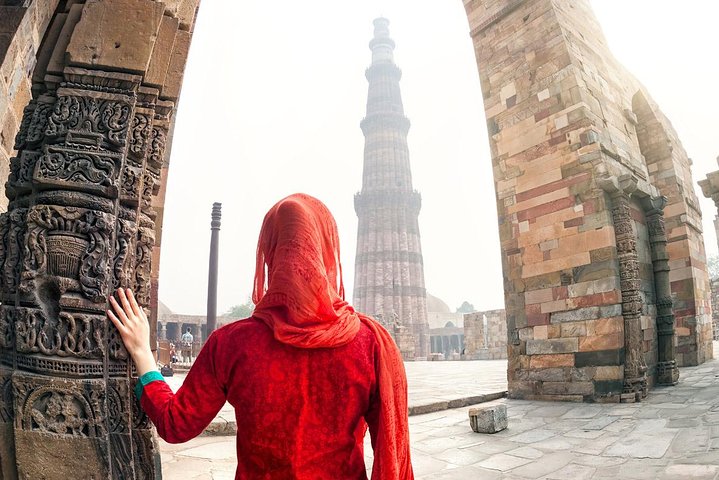 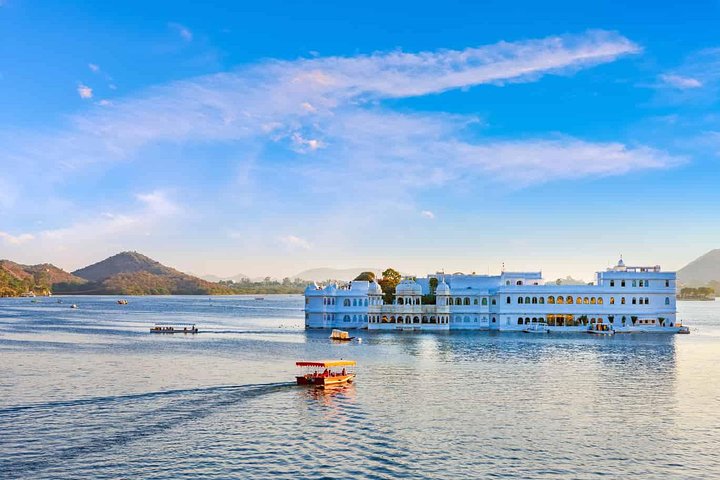 Stop At: Humayun's Tomb, Mathura Road Opp Nizamuddin Mosque, New Delhi 110013 India
Pickup at 9am from your desired location in Delhi, Gurugram (Gurgaon) or Noida and visit Humayun's Tomb (Unesco World Heritage site) - is the tomb of the Mughal Emperor Humayun in Delhi. Constructed for the Mughal emperor in the mid-16th century by Haji Begum, Humayun's Persian-born wife, the tomb marries Persian and Mughal elements, with restrained decoration enhancing the architecture.
Duration: 1 hour

Stop At: Qutub Minar, Qutb Minar, Mehrauli, New Delhi 110030 India
Qutub Minar (a UNESCO World Heritage Site) complex is studded with ruined tombs and monuments, the majestic highlight of which is the Qutab Minar, a 73m-tall 12th-century tower, after which this complex is named.
Duration: 1 hour

Stop At: Lotus Temple Rd, Bahapur, Shambhu Dayal Bagh, Kalkaji Near Kalkaji Temple, East of Nehru Place, New Delhi 110019 India
Lotus Temple (Monday Closed) - offers a rare pocket of calm in the hectic city. This architectural masterpiece was designed by Iranian-Canadian architect Fariburz Sahba in 1986. It is shaped like a lotus flower, with 27 delicate-looking white-marble petals. The temple was created to bring faiths together; visitors are invited to pray or meditate silently according to their own beliefs.
Duration: 1 hour

Stop At: India Gate, Rajpath Near Connaught Place New Delhi, New Delhi 110001 India
This imposing 42m-high stone memorial arch was designed by Lutyens in 1921. It pays tribute to around 90,000 Indian army soldiers who died in WWI, the Northwest Frontier operations and the 1919 Anglo-Afghan War.
Duration: 30 minutes

No meals included on this day.
Accommodation included: Hotel in Agra: 5 star - Courtyard By Marriott or similar / 4 star - Sarovar Crystal Premier or similar

Stop At: Taj Mahal, Dharmapuri, Forest Colony, Tajganj, Agra 282001 India
At sunrise visit Taj Mahal (a Unesco World Heritage Site) - widely considered the most beautiful building in the world. Poet Rabindranath Tagore described it as 'a teardrop on the cheek of eternity'. Built by Shah Jahan as a memorial for his third wife, Mumtaz Mahal, who died giving birth to their 14th child in 1631. It's a wealth of white marble and semi-precious stone – « undoubtedly the highlight of the tour »
Duration: 2 hours

Stop At: Agra Fort Rakabgani, Agra 282003 India
Agra Fort (a Unesco World Heritage Site) - is a historical fort along the bank of the Yamuna River in the city of Agra. It was the main residence of the emperors of the Mughal Dynasty until 1638 and one of the finest Mughal forts in India.

Stop At: Amber Palace, Devisinghpura, Amer, Jaipur 302001 India
The magnificent, formidable, honey-hued fort of Amber (pronounced 'amer'), an ethereal example of Rajput architecture, rises from a rocky mountainside about 11km northeast of Jaipur, and is the city’s must-see sight. It comprises an extensive palace complex, built from pale yellow and pink sandstone, and white marble, and is divided into four main sections, each with its own courtyard.
Duration: 2 hours

Stop At: Jal Mahal, Amer Road, Jaipur 302002 India
Photo Stop at Jal Mahal (Water Palace) - Near the cenotaphs of the maharanis of Jaipur and beautifully situated in the watery expanse of Man Sagar, is this dreamlike palace. It's origins are uncertain, but it was believed to have been extensively restored if not built by Jai Singh II (1734).
Duration: 15 minutes

Stop At: City Palace of Jaipur, Tripolia Bazar Near Jantar Mantar, Jaipur 3023002 India
The City Palace is the residence of the royal family. A complex of courtyards, gardens and buildings, the impressive City Palace is right in the centre of the Old City. The outer wall was built by Jai Singh II, but within it the palace has been enlarged and adapted over the centuries. There are palace buildings from different eras, some dating from the early 20th century. It is a striking blend of Rajasthani and Mughal architecture.
Duration: 1 hour

Stop At: Jantar Mantar - Jaipur, Tripoliya Bazaar near entrance to City Palace, Jaipur 302020 India
Jantar Mantar Observatory (a Unesco World Heritage Site) - is a collection of curving geometric buildings that are carefully calibrated to monitor the movement of the stars and planets.

Stop At: Jodhpur, Jodhpur, Jodhpur District, Rajasthan
After breakfast drive to the blue city of Jodhpur. The Blue City really is blue! Inside is a tangle of winding, glittering, medieval streets, which never seem to lead where you expect them to, scented by incense, roses and sewers, with shops and bazaars selling everything from trumpets and temple decorations to snuff and saris.

Upon arrival in Jodhpur check in to your pre-booked hotel.
Duration: 5 hours

Stop At: Clock Tower Market, Jodhpur India
Evening leave to visit the Ghanta Ghar also known as Clock Tower. The century-old clock tower is a city landmark surrounded by the vibrant sounds, sights, and smells of Sardar Market. The market is bordered by triple-arched gateways at its northern and southern ends. The narrow, winding lanes of the old city spread out in all directions from here. Westward, you plunge into the old city’s commercial heart, with crowded alleys and bazaars selling vegetables, spices, sweets, silver, and handicrafts.
Duration: 2 hours

Stop At: Mehrangarh Fort, Fort Rd., Jodhpur 342006 India
After breakfast check out from hotel and visit Mehrangarh Fort, One of the largest forts in India. The beauty and the grandeur of numerous palaces in the fort narrate a saga of hard sandstones yielding to the chisels of skilled Jodhpuri sculptures.
Duration: 2 hours

Stop At: Ranakpur Jain Temple, Desuri Tehsil, Sadri 306702 India
Enroute to Udaipur visit Ranakpur Jain Temple - superbly preserved in a near-perfect condition for over 500 years. The most attractive features are the 29 halls of the temple, which have 1444 pillars of which no two are like.
Duration: 1 hour

Stop At: Udaipur, Udaipur, Udaipur District, Rajasthan
Later continue your drive to Udaipur that has a romance of setting unmatched in Rajasthan and arguably in all India – snuggling beside tranquil Lake Pichola, with the purple ridges of the Aravalli Range stretching away in every direction. Fantastical palaces, temples, havelis (traditional, ornately decorated residences) and countless narrow, crooked, timeless streets add the human counterpoint to the city’s natural charms.

Upon arrival in Udaipur check in to your pre-booked hotel.
Duration: 6 hours

Meals included:
• Breakfast: (If booked with option including Hotels)
Accommodation included: Hotel in Udaipur: 5 star - The Trident or similar / 4 star - The Fern Residency or similar

Stop At: City Palace of Udaipur, Jagdish Temple Rd City Palace Complex, Udaipur 313001 India
Surmounted by balconies, towers and cupolas towering over the lake, the imposing City Palace is Rajasthan’s largest palace. The main part is now a museum with a large and varied collection of mosaics, glass and porcelain figures, miniatures and paintings.
Duration: 2 hours

Stop At: Bagore Ki Haveli Museum, Gangaur Ghat Marg Hotel Gangaur Palace, Udaipur 313001 India
A grand haveli (city mansion) overlooking Lake Pichola. This 18th-century building features 100 or so rooms, a large number of which are decorated with period furniture. Others have been transformed into galleries full of ephemera (including what is allegedly the world's largest turban).
Duration: 1 hour

Stop At: Sajjangarh Monsoon Palace, Sajjan Garh Rd Near Mewar Garh Hotel, Udaipur 313001 India
In the early evening, head out to Monsoon Palace, Perched on top of a distant hill like a fairy-tale castle, this melancholy, neglected late-19th-century palace was constructed by Maharana Sajjan Singh. Originally an astronomical centre, it became a monsoon palace and hunting lodge. Visitors stream up here for the marvelous views, particularly at sunset.
Duration: 1 hour

Meals included:
• Breakfast: (If booked with option including Hotels)
Accommodation included: Hotel in Udaipur: 5 star - The Trident or similar / 4 star - The Fern Residency or similar

Day 7: Drop-off at Udaipur Airport or Your Desired Location in Udaipur

Pass By: Maharana Pratap Airport Udaipur, NH 76, Dabok, Rajasthan 313022, India
After breakfast, your tour comes to an end with drop-off at Udaipur airport or other desired location in Udaipur.

Meals included:
• Breakfast: (If booked with option including Hotels)
No accommodation included on this day.

Informacion Adicional
"Confirmation will be received at time of booking"
"A current valid passport is required on the day of travel"
"No heart problems or other serious medical conditions"
"Dress code is smart casual"
"May be operated by a multi-lingual guide"
"Vegetarian option is available, please advise at time of booking if required"
"Please advise any specific dietary requirements at time of booking"
"The duration of transfers are approximate, the exact duration will depend on the time of day and traffic conditions"
"A current valid passport is required on the day of travel"
"Not wheelchair accessible"
"Stroller accessible"
"Near public transportation"
"Infants must sit on laps"
"Not recommended for travelers with back problems"
"Not recommended for pregnant travelers"
"Mandatory Gala Dinner on X-mas and New Year Eve at hotel of stay is not included and will be charged extra."
"Taj Mahal sunrise visit is subject to weather conditions"
"You MUST confirm and obtain any visa requirements prior to border crossing. All visa requirements are the sole responsibility of the traveler"
"Travelers should be vaccinated and carry the covid vaccination certificate"
"Most travelers can participate"
"This is a private tour/activity. Only your group will participate"
"Face masks required for travelers in public areas"
"Face masks required for guides in public areas"
"Hand sanitizer available to travelers and staff"
"Social distancing enforced throughout experience"
"Gear/equipment sanitized between use"
"Transportation vehicles regularly sanitized"
"Regular temperature checks for staff"
"Temperature checks for travelers upon arrival"
"Proof of COVID-19 vaccination required for travelers"
"COVID-19 vaccination required for guides"

Traveler pickup is offered
Delhi Airport, Railway Station, Your Hotel or other desired location in Delhi, Gurugram (Gurgaon) or Noida