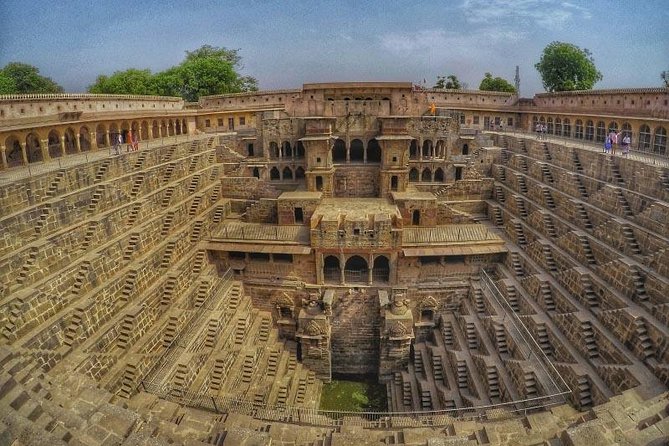 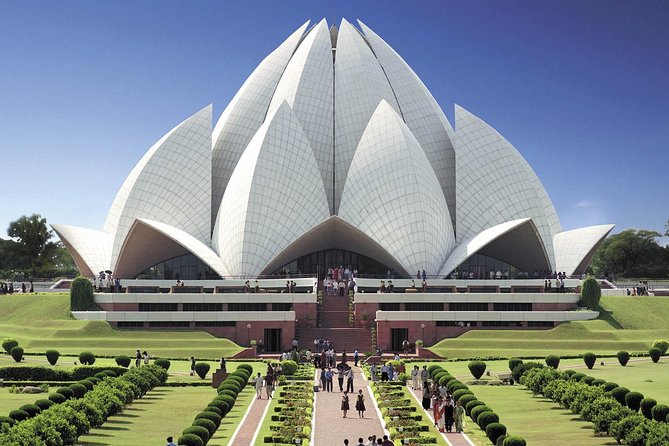 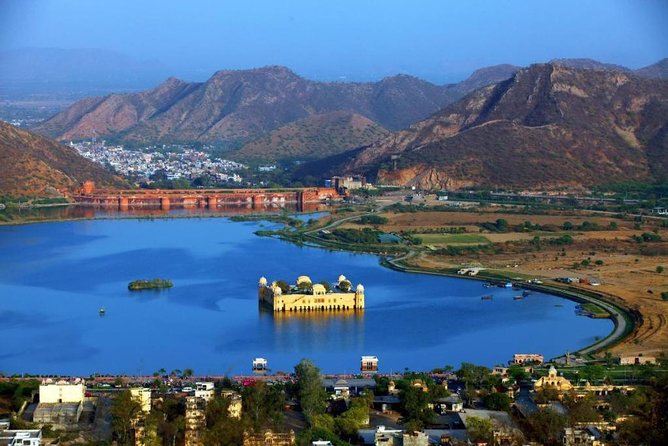 Save yourself the stress, and let your accommodations and transport be planned out for you on this 6-day tour of India’s Golden Triangle. Go to UNESCO-listed sites, such as Qutub Minar, Agra Fort, Amber Fort, Humayun's Tomb, and the Taj Mahal. Visit Raj Ghat, the site of Mahatma Ghandi's cremation and Jama Masjid, one of India’s largest mosques. Visit the famous step-wells at Abhaneri and complete your trip with a rickshaw (Tricycle) ride through a bazaar in Delhi.

Pass By: Indira Gandhi International Airport, New Delhi, Delhi 110037, India
Pick-up from Delhi airport, hotel or other desired location in Delhi, Gurugram (Gurgaon) or Noida, you are greeted by our representative with fresh flower garlands and Transfer to your pre-booked hotel.

Stop At: Humayun's Tomb, Mathura Road Opp Nizamuddin Mosque, New Delhi 110013 India
After breakfast check out from hotel and visit Humayun's Tomb (Unesco World Heritage site) - is the tomb of the Mughal Emperor Humayun in Delhi. The arched facade is inlaid with bands of white marble and red sandstone, and the building follows strict rules of Islamic geometry, with an emphasis on the number eight.
Duration: 1 hour

Stop At: Lotus Temple Rd, Bahapur, Shambhu Dayal Bagh, Kalkaji Near Kalkaji Temple, East of Nehru Place, New Delhi 110019 India
Designed for tranquil worship, Delhi's beautiful Lotus Temple offers a rare pocket of calm in the hectic city. It is shaped like a lotus flower, with 27 delicate-looking white-marble petals. The temple was created to bring faiths together; visitors are invited to pray or meditate silently according to their own beliefs.

Stop At: India Gate, Rajpath Near Connaught Place New Delhi, New Delhi 110001 India
This imposing 42m-high stone memorial arch was designed by Lutyens in 1921. It pays tribute to around 90,000 Indian army soldiers who died in WWI, the Northwest Frontier operations and the 1919 Anglo-Afghan War.
Duration: 30 minutes

Pass By: Parliament House, Sansad Marg, New Delhi 110002 India
This circular, colonnaded building, designed by Edwin Lutyens and Herbert Baker, was where the 1947 handover of power from Britain to the newly independent India took place, and parliament still meets here.

Stop At: Friday Mosque (Jama Masjid), 6 km North of Connaught Pl. across from Lal Qila, New Delhi India
A beautiful pocket of calm at the heart of Old Delhi's mayhem, the capital's largest mosque is built on a 10m elevation, towering above the surrounding hubbub. It can hold a mind-blowing 25,000 people. The marble and red-sandstone structure, known also as the ‘Friday Mosque’, was Shah Jahan’s final architectural triumph, built between 1644 and 1658.
Duration: 30 minutes

Stop At: Chandni Chowk, Near Red Fort, New Delhi 110006 India
The highlight of the tour is an exhilarating bicycle rickshaw ride through the bustling and colorful streets of Chandni chowk (Silver Street).
Duration: 30 minutes

Pass By: Red Fort, Netaji Subhash Marg, New Delhi 110002 India
Founded by Emperor Shah Jahan and surrounded by a magnificent 18m-high wall, this fort took 10 years to construct (1638–48) and is rumoured to have had the decapitated bodies of prisoners built into the foundations for luck.

Stop At: Agra, Agra, Agra District, Uttar Pradesh
After sightseeing of Delhi drive 3 hours via expressway to the City of Taj Mahal - Agra. Upon arrival in Agra check inn to the hotel.
Duration: 3 hours

Stop At: Taj Mahal, Dharmapuri, Forest Colony, Tajganj, Agra 282001 India
At sunrise visit Taj Mahal (a Unesco World Heritage Site) - widely considered the most beautiful building in the world. Built by Shah Jahan as a memorial for his third wife, Mumtaz Mahal, who died giving birth to their 14th child in 1631.
Duration: 2 hours

Stop At: Agra Fort Rakabgani, Agra 282003 India
In the afternoon visit Agra Fort (a Unesco World Heritage Site) - is a historical fort along the bank of the Yamuna River in the city of Agra. It was the main residence of the emperors of the Mughal Dynasty until 1638 and one of the finest Mughal forts in India.
Duration: 1 hour

Stop At: Mehtab Bagh, Nagla Devjit Etmadpur, Agra India
Evening proceed to a Photo Tour of Taj Mahal from Mehtab Bagh — the moonlit garden — believed to have been designed by Shah Jahan to view the Taj on moonlit nights, far away from the maddening crowd, The garden complex is situated on the left bank of Yamuna opposite to TajMahal. It is a huge square measuring approximately 300x300 m and in straight alignment with the Taj Mahal. The forestry plantations and agricultural fields provide a green forecourt to TajMahal and its reflection in Yamuna. Here you can witness the sunset over the Taj Mahal.
Duration: 1 hour

Stop At: Chand Baori (Step well), Jaipur-Agra Road, Abhaneri 303313 India
After breakfast check out from Agra hotel and drive to the Pink City of Jaipur. Enroute to Jaipur visit Abhaneri, a small town village, popular for the amazing 'Baoris' (step wells) & Harshat Mata Temple. Chand Baori is one of Rajasthan's most spectacular baori (step-wells). It is believed to have been built by King Chand, a local Rajput ruler, in the 10th-century.
Duration: 1 hour

Stop At: Amber Fort Palace, Jaipur 302021 India
After breakfast visit Amber Fort - The magnificent, formidable, honey-hued fort of Amber (pronounced 'amer'), an ethereal example of Rajput architecture, rises from a rocky mountainside about 11km northeast of Jaipur, and is the city’s must-see sight. It comprises an extensive palace complex, built from pale yellow and pink sandstone, and white marble, and is divided into four main sections, each with its own courtyard.
Duration: 2 hours

Stop At: Jal Mahal, Amer Road, Jaipur 302002 India
Photo Stop at Jal Mahal (Water Palace) - Near the cenotaphs of the maharanis of Jaipur and beautifully situated in the watery expanse of Man Sagar, is this dreamlike palace. It's origins are uncertain, but it was believed to have been extensively restored if not built by Jai Singh II (1734).
Duration: 15 minutes

Stop At: City Palace of Jaipur, Tripolia Bazar Near Jantar Mantar, Jaipur 3023002 India
The City Palace is the residence of the royal family. A complex of courtyards, gardens and buildings. There are palace buildings from different eras, some dating from the early 20th century. It is a striking blend of Rajasthani and Mughal architecture.
Duration: 1 hour

Stop At: Jantar Mantar - Jaipur, Tripoliya Bazaar near entrance to City Palace, Jaipur 302020 India
Jantar Mantar Observatory (a Unesco World Heritage Site) - is a collection of curving geometric buildings that are carefully calibrated to monitor the movement of the stars and planets.
Duration: 1 hour

Stop At: New Delhi, New Delhi, National Capital Territory of Delhi
Morning at leisure. Later in the afternoon you will depart for Delhi, where you will arrive at approximately 6pm and be dropped off at your preferred location.
Duration: 5 hours

Meals included:
• Breakfast: (If booked with option including Hotels)
No accommodation included on this day.

Informacion Adicional
"Confirmation will be received at time of booking"
"A current valid passport is required on the day of travel"
"Not recommended for travelers with back problems"
"No heart problems or other serious medical conditions"
"Not recommended for pregnant travelers"
"Dress code is smart casual"
"May be operated by a multi-lingual guide"
"Vegetarian option is available, please advise at time of booking if required"
"The duration of transfers are approximate, the exact duration will depend on the time of day and traffic conditions"
"A current valid passport is required on the day of travel"
"Not wheelchair accessible"
"Stroller accessible"
"Near public transportation"
"Infants must sit on laps"
"Mandatory Gala Dinner on X-mas and New Year Eve at hotel of stay is not included and will be charged extra."
"Travelers should have a moderate physical fitness level"
"Taj Mahal sunrise visit is subject to weather conditions"
"This experience requires good weather. If it’s canceled due to poor weather, you’ll be offered a different date or a full refund"
"This is a private tour/activity. Only your group will participate"
"Face masks required for travelers in public areas"
"Face masks required for guides in public areas"
"Hand sanitizer available to travelers and staff"
"Social distancing enforced throughout experience"
"Gear/equipment sanitized between use"
"Transportation vehicles regularly sanitized"
"Regular temperature checks for staff"
"Temperature checks for travelers upon arrival"

Traveler pickup is offered
Delhi Airport or your desired location in Delhi, Gurugram (Gurgaon) or Noida