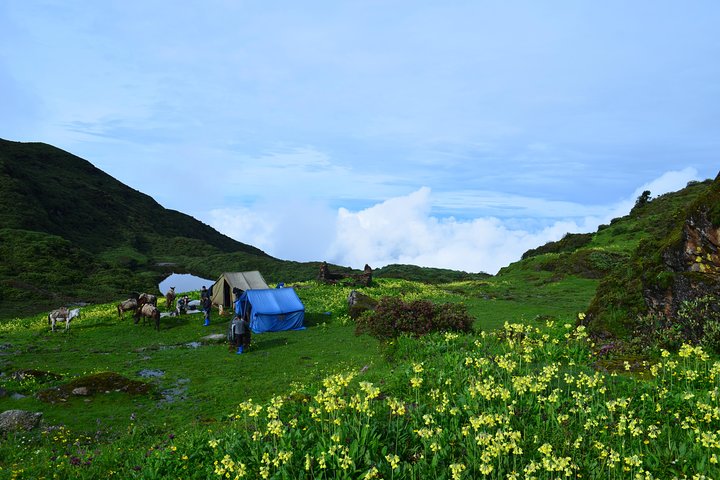 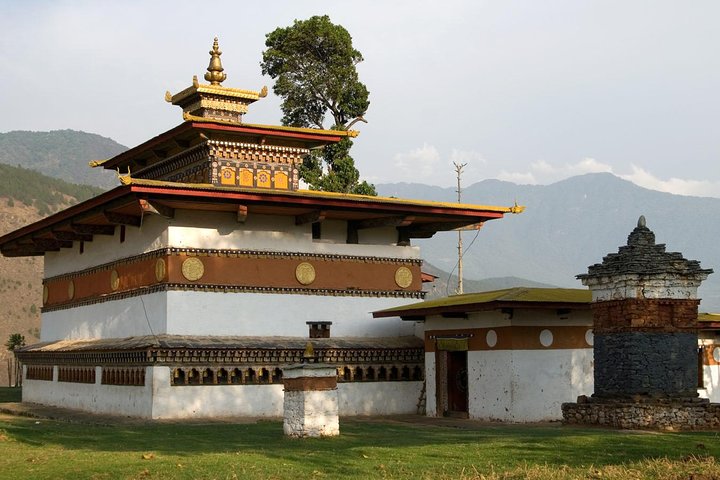 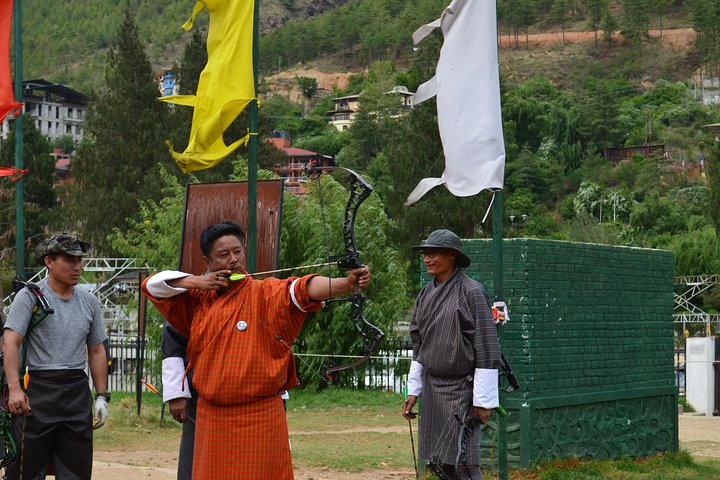 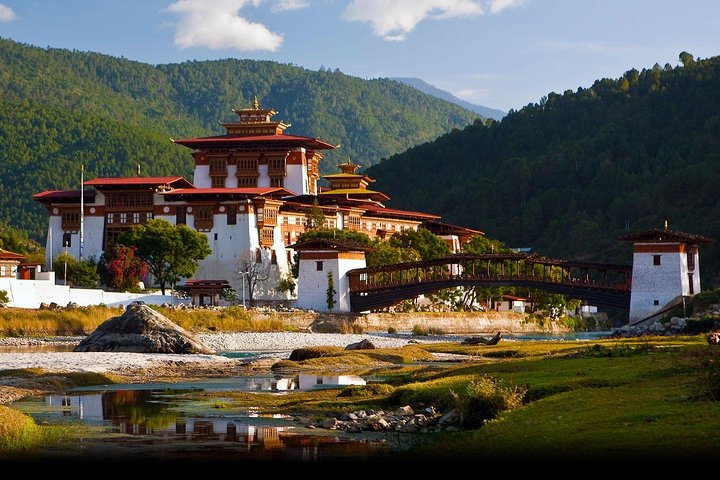 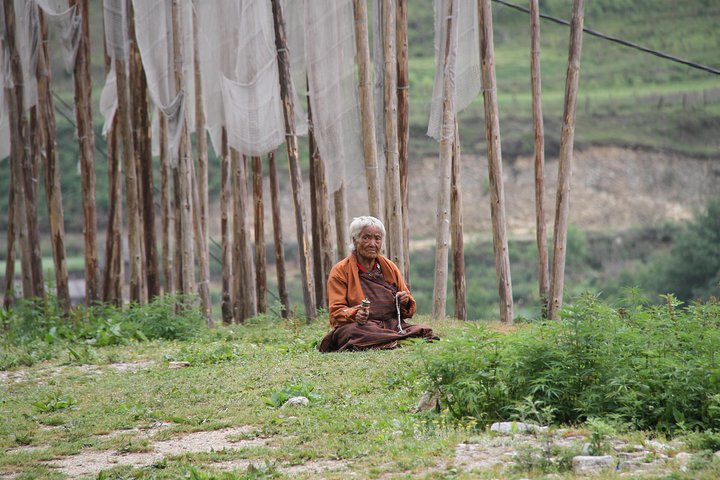 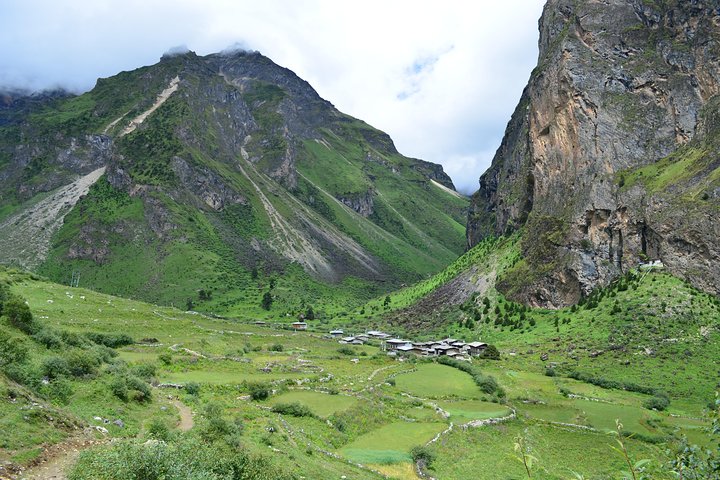 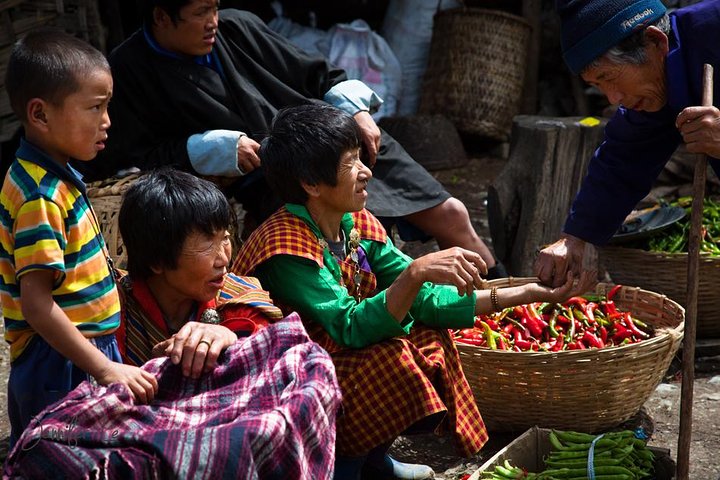 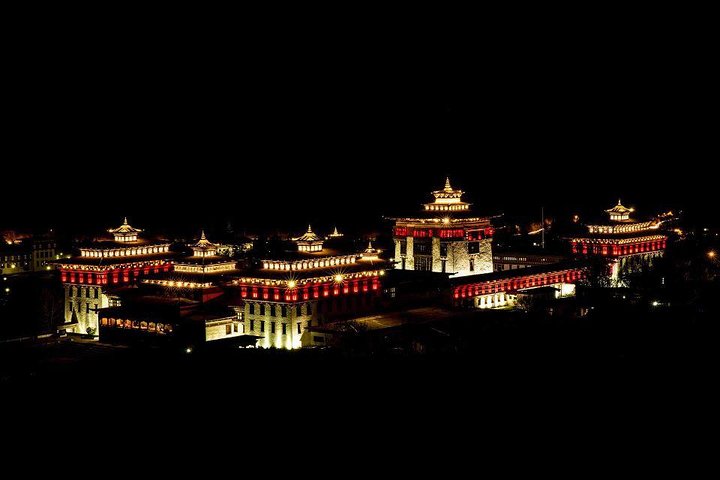 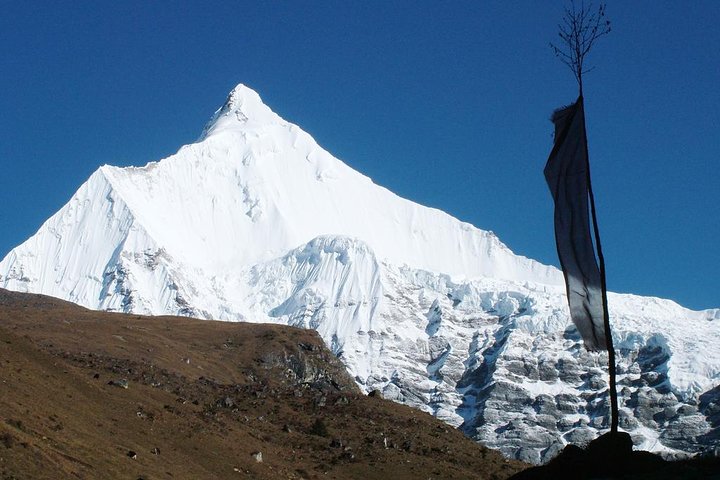 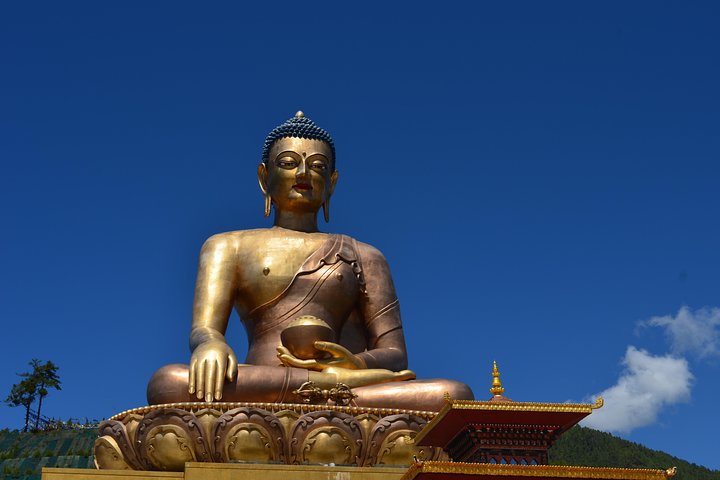 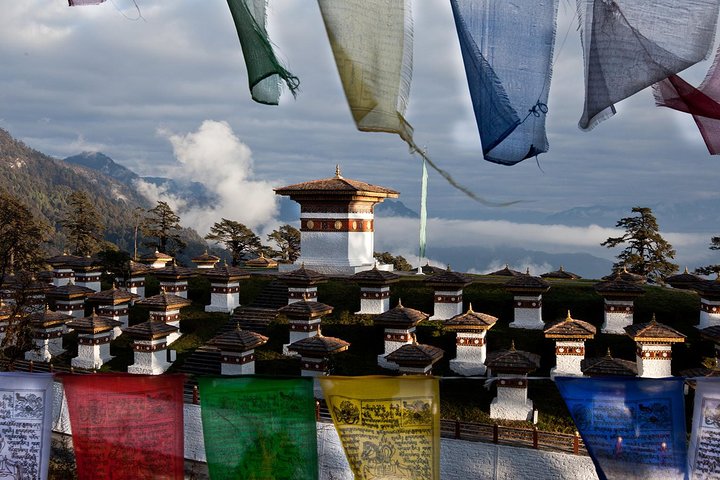 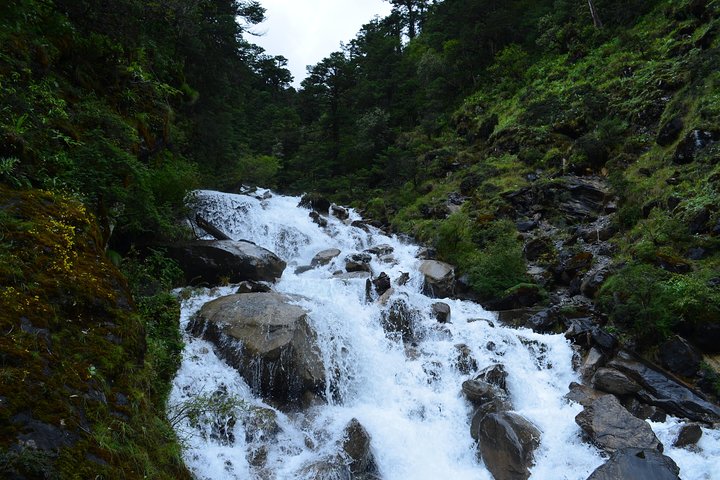 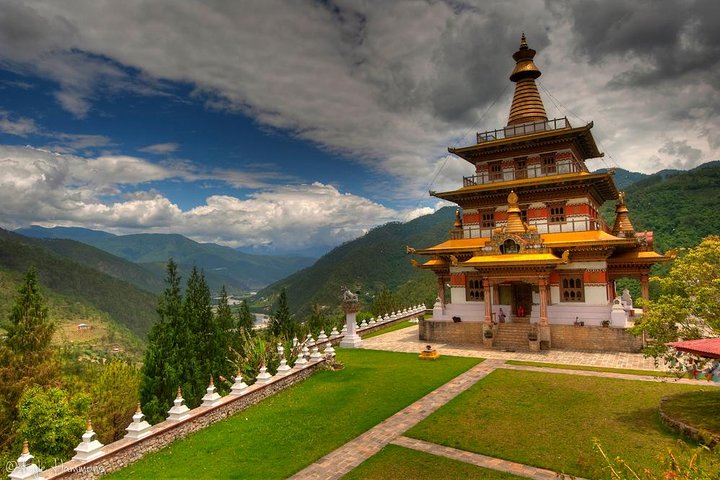 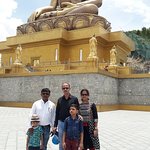 Uncover the land of hidden kingdom nestled between China and Indian on a 4 Day tour. Exploring the unique lifestyle of Bhutanese people and culture. Hiking to one of the most venerated places of pilgrimage in the Himalayan- Taktsang Monastery, famously known as Tiger Nest Monastery.

As you walk,you'll learn the history of this country and its ancient roots.

Day 1: Arrive Paro and drive to Punakha for Halt

Stop At: National Museum, Tag-Dzong Rinpung Dzong, Paro 12001 Bhutan
National Museum of Bhutan is located inside six floors of circular Ta Dzong, an ancient watchtower above Paro Dzong. The original building was constructed in 1656. In 1872, the future first monarch, Ugyen Wangchuk was imprisoned here, while embroiled in the conflict. The building was converted to house, the first museum of Bhutan in 1968. The collection of the museum comprises of textiles, gears, costumes, manuscripts, paintings, appliqué and embroidered Thangkas. There is a gallery of Bhutan’s famous stamp, stuffed animals, insects, bamboo crafts, arms and amours, jewellery, household artifacts. On the top, there is also a chapel in form of a life-sustaining tree, with icons representing various Himalayan Buddhist traditions.
Duration: 1 hour 30 minutes

Stop At: Rinpung Dzong, Paro Bhutan
Rinpung Dzong is a large dzong - Buddhist monastery and fortress - of the Drukpa Lineage of the Kagyu school in Paro District, Bhutan. It houses the district Monastic Body and government administrative offices of Paro Dzongkhag. It is listed as a tentative site in Bhutan's Tentative List for UNESCO inclusion
Duration: 1 hour

Stop At: Dochula Pass, Thimphu Bhutan
Dochula pass is located on the way to Punakha from Thimphu. The pass is a popular location among tourists as it offers a stunning 360 degree panoramic view of the Himalayan mountain range. The view is especially scenic on clear, winter days with snow capped mountains forming a majestic backdrop to the tranquility of the 108 chortens gracing the mountain pass.

Bhutanese families enjoy visiting the pass during holidays and weekends to picnic and simply enjoy the scenery. It is common to see families and groups of friends seated among st the chortens, enjoying a packed lunch and hot tea. For tourists this is an ideal location to capture beautiful pictures of the Himalayan mountain range during clear, warm days.
Duration: 30 minutes

Day 2: Punakha Sightseeing and drive to Paro via Thimphu

Stop At: Punakha Dzong, Punakha 13001 Bhutan
Punakha Dzongkhag has been inextricably linked with momentous occasions in Bhutanese history. It served as the capital of the country from 1637 to 1907 and the first national assembly was hosted here in 1953. Punakha Dzong is not only the second oldest and second largest dzong but it also has one of the most majestic structures in the country.

October 13, 2011 marked an unforgettable wedding of the King of Bhutan, Jigme Khesar Namgyel Wangchuck to Jetsun Pema which was held at Punakha Dzong. Punakha Dzong was built at the confluence of two major rivers in Bhutan, the Pho Chhu and Mo Chhu, which converge in this valley. It is an especially beautiful sight on sunny days with sunlight reflecting off the water onto its white-washed walls.

In addition to its structural beauty, Punakha Dzong is notable for containing the preserved remains of Zhabdrung Ngawang Namgyal, the unifier of Bhutan as well as a sacred relic known as the Ranjung Karsapani. This relic is a self-created image of Avalokiteswara that miraculously emerged from the vertebrae of Tsangpa Gyarey, the founder of the Drukpa School when he was cremated.

Punakha valley has a pleasant climate with warm winters and hot summers. It is located at an average elevation of 1200 m above sea level. Owing to the favorable climatic conditions, rice has become the main cash crop cultivated in the region.
Duration: 1 hour

Stop At: Chimi Lhakhang Temple, Punakha Bhutan
Also known as the “Fertility Temple,” the single building site was originally built in 1499 on a short hill that had been blessed by rogue Buddhist leader Drukpa Kunley, known as the “Divine Madman.” Drupa Kunley, also known as “The Saint of 5,000 Women” worked overtime to spread enlightenment through an active sex life. He was known to live a truly bacchanal lifestyle full of wine, women, and poetry. He is also credited with bringing Buddhism to Bhutan, hence the common phallic imagery found throughout the country. The phallus became Drupa Kunley’s symbol, signaling both fertility and the power to bring enlightenment to those who… learned from its teachings. Because of this, his penis as a symbol is sometimes known as the “Thunderbolt of Flaming Wisdom.”
Duration: 2 hours

Stop At: Tashichho Dzong (Thimpu Dzong), Chhagchhen Lam, Thimphu Bhutan
Tashichho Dzong has been the seat of the government since 1952 and presently houses the throne room and offices of the king, the secretariat and the ministries of home affairs and finance. Other government departments are housed in buildings nearby.

It was first constructed in 1216 A.D. by Lama Gyalwa Lhanangpa where Dechen Phodrang now stands above Thimphu. In 1641, Zhabdrung Ngawang Namgyal acquired it but finding it too small, he built another one, known as the lower Dzong. The original dzong was destroyed by fire in 1771 and everything was moved to the lower dzong. The new building was later expanded several times over the years. It was damaged during an earthquake in 1897 and rebuilt in 1902. King Jigme Dorji Wangchuck had it completely renovated and enlarged over five years after he moved the capital to Thimphu in 1952 in traditional style using neither nails nor written plans.

The dzong is located close to Thimphu town, next to the banks of the Wang Chhu River. It is an impressively large structure, surrounded by well-kept lawns and beautiful gardens.
Duration: 1 hour

Stop At: Thimphu Chorten (Memorial Chorten), Thimphu Bhutan
The National Memorial Chorten was built in memory of Third Druk King of Bhutan and is dedicated to World Peace. The chorten is a large white structure crowned with a golden spire.

It is located close to the center of Thimphu city and is one of its most iconic monuments. Visitors will find elderly Bhutanese people circumambulating the Chorten throughout the day. Chorten literally means ‘Seat of Faith’ and Buddhists often call such monuments, the ‘Mind of Buddha’. The Chorten is an extraordinary example of Buddhist architecture and artwork with its gorgeous paintings and intricate sculptures.
Duration: 1 hour

Stop At: Buddha Dordenma, Kuensel Phodrang Viewing Point, Thimphu 11001 Bhutan
The Buddha Dordenma is located atop a hill in Kuenselphodrang Nature Park and overlooks the Southern entrance to Thimphu Valley. The statue fulfils an ancient prophecy dating back to the 8th century A.D that was discovered by Terton Pema Lingpa (Religious Treasure Discoverer) and is said to emanate an aura of peace and happiness to the entire world.

This massive statue of Shakyamuni measures in at a height of 51.5 m, making it one of the largest statues of Buddha in the world. The statue is made of bronze and is gilded in gold. 125,000 smaller Buddha statues have been placed within the Buddha Dordenma statue; 100,000 statues of which are 8-inches-tall and 25,000 statues of which are 12 inches tall. Each of these thousands of Buddhas have also been cast in bronze and gilded. The throne that the Buddha Dordenma sits upon is a large meditation hall.
Duration: 1 hour 30 minutes

Stop At: Paro Taktsang, Taktsang Trail BT, Paro Bhutan
Paro Taktsang Monastery more famous as Tiger's nest Monastery is a Buddhist temple complex which clings to a cliff, 3120 meters above the sea level on the side of the upper Paro valley, Bhutan.It is one of the most famous touristic destinations of the country and the cultural icon of Bhutan.

Visiting the Paro Taktsang Monastery is an unforgettable experience thanks to its unique location and the views of surrounding majestic mountains and emerald green valleys.

The main peculiarity of the monastery is its isolated location. It is only accessible by mountainous paths.

The remote location of the monastery makes it amazingly beautiful and unique, but also creates technical difficulties.
Duration: 6 hours

Stop At: Kyichu Lhakhang, Lamgong Gewog, Paro 12001 Bhutan
As we walk towards toward the Kyichu Lhakhang, we can see elderly pilgrims constantly walking around the Lhakhang and spinning the prayers wheels. We can see a wall painting onto the right side of the entrance way as we come near the internal courtyard. It is the wall painting of a king called Gesar of Ling who was a popular Tibetan warrior king. His epic poem is believed to be the longest in the world.

The Kyichu Lhakhang conceals the statue of Jowo Jamba which is originally from the 7th century. It is considered as the greatest treasure of the valley. Outside the hall of the shrine, has the statue of Chenresig having 11 heads and 1000 arms. The main entrance door is beautifully covered with gold. We can see that in front of the statue are the grooves worn into the wooden floor by the generations of prostration. . Kyichu Lhakhang holds some of the oldest relics and the floor of the main temple which is made of wood is inlaid with turquoise, other precious gems and stones.

Next to the main temple is the Guru Lhakhang. The Guru Lhakhang consists of 5 meter high statue of Guru Rinpoche and Kurukulla (Red Tara) which holds a bow and arrow made of flowers. We can see a chorten to the right side of Guru, where it contains the ashes of Dilgo Khyentse Rinpoche. He was an honorable Nyingma Buddhist and the spiritual teacher of the Queen Mother. His former quarters are closed to the visitors which is located at the left side. We can also see a heap of iron links in the corner of the Lhakhang which was faked by the famous bridge builder of Bhutan called Thangtong Gyalpo.

Kyichu Lhakhang is a very important place for art connoisseurs, historians, pilgrims and visitors from all around the world because it is a place of culture and art. Outside the temple, we can see water pray wheels, small prayer wheels with Lenza script, Monks house, palace for Naga and Stupa for Naga. It is believed that the two orange trees which are in the courtyard of the Lhakhang bears fruit throughout the year.
Duration: 1 hour

Day 4: Departure from Paro International Airport to your onward destination.

Stop At: Paro International Airport - Bhutan, Airport Road Paro, Paro 12001, Bhutan
Your Bhutan tour guide will escort you to the airport for your onward destinations. With a heavy heart, we wave you goodbye and until time we see you again.
Duration: 1 hour

Meals included:
• Breakfast: All meals (buffet system /include evening tea/snacks per pax each day).
No accommodation included on this day.