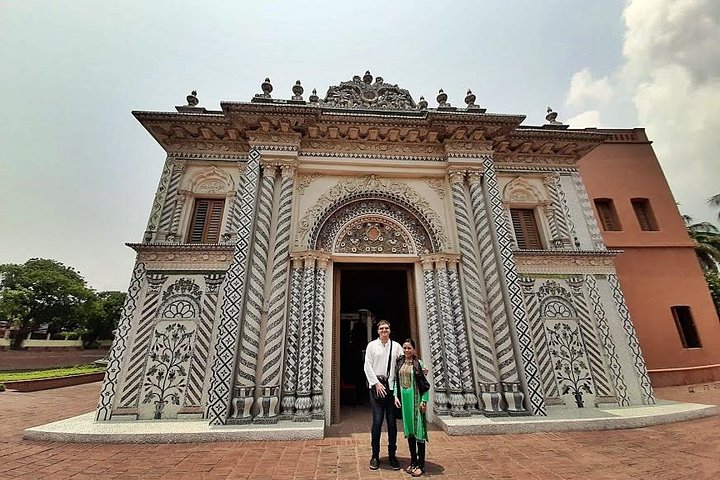 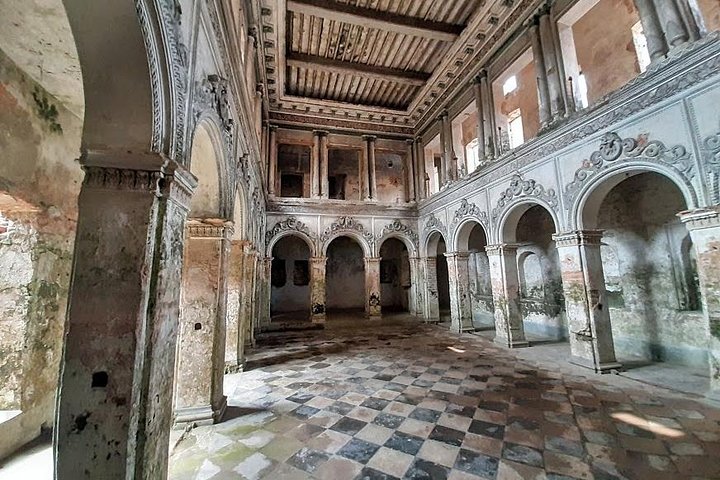 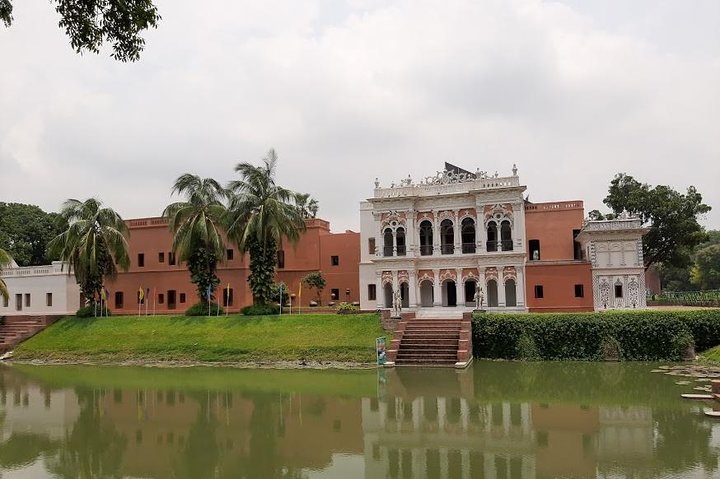 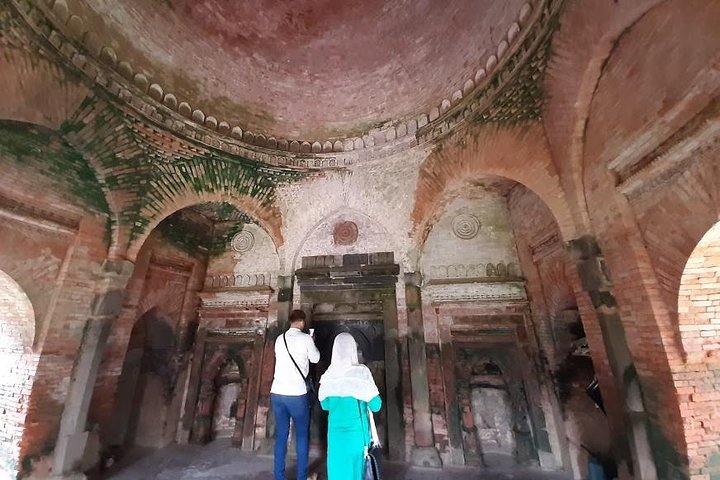 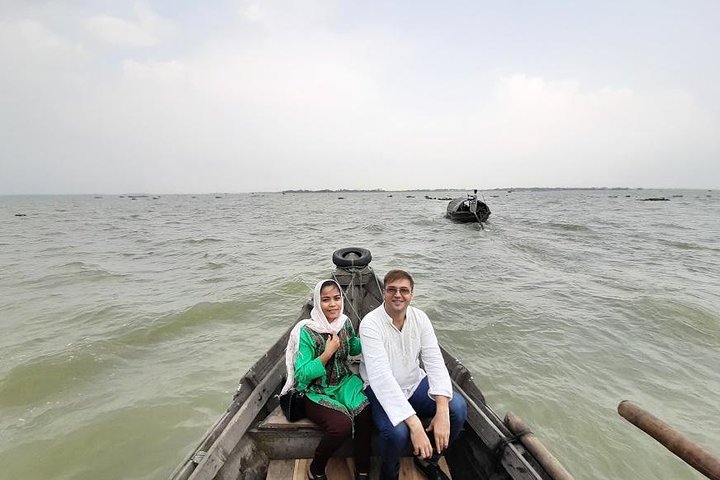 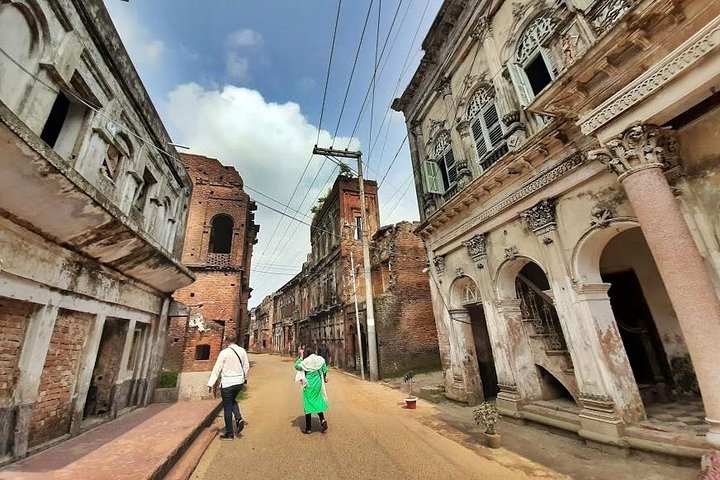 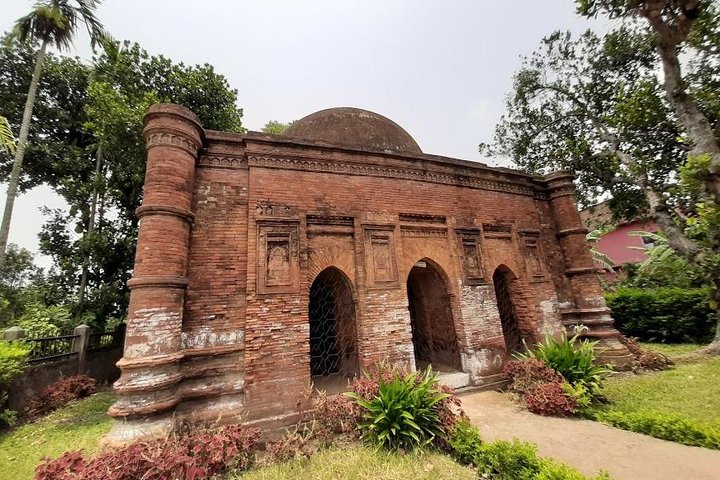 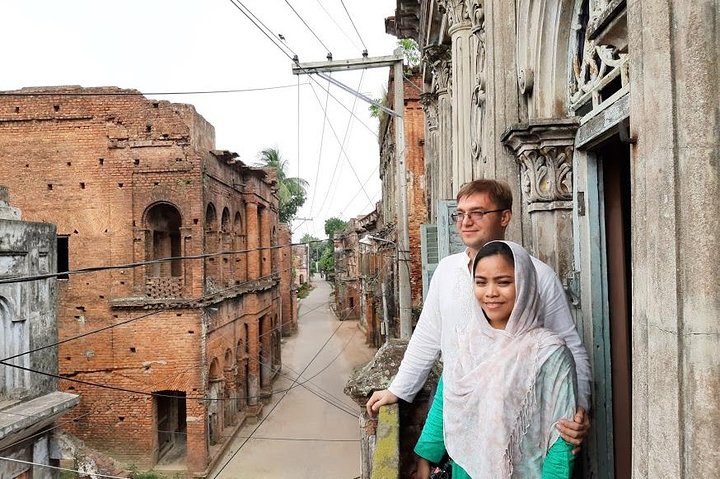 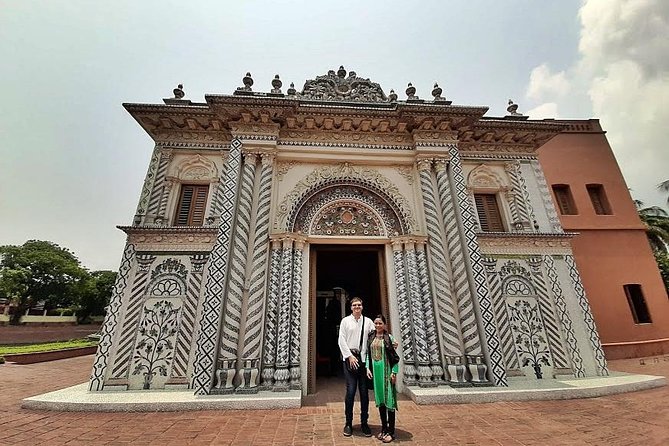 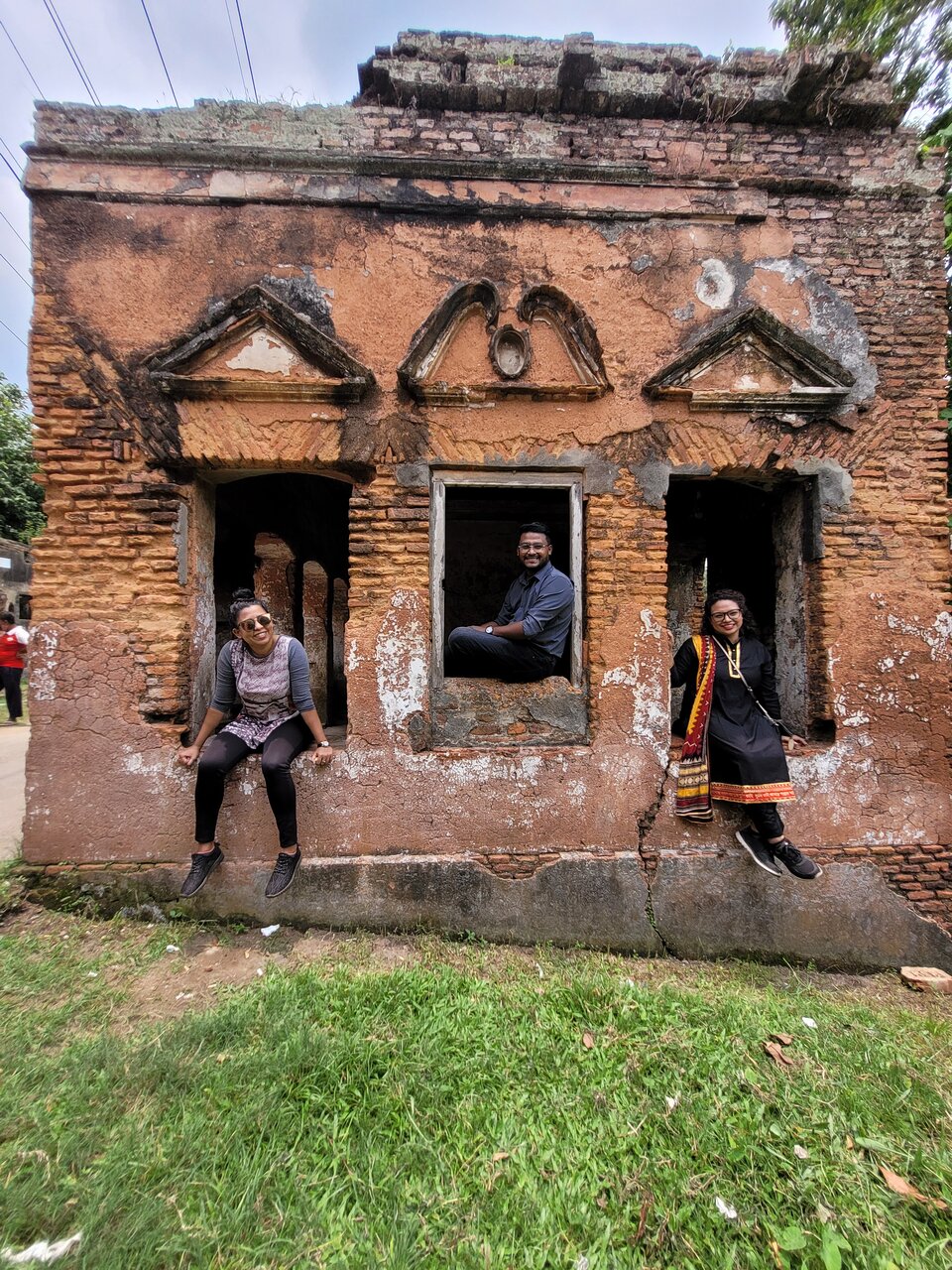 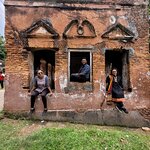 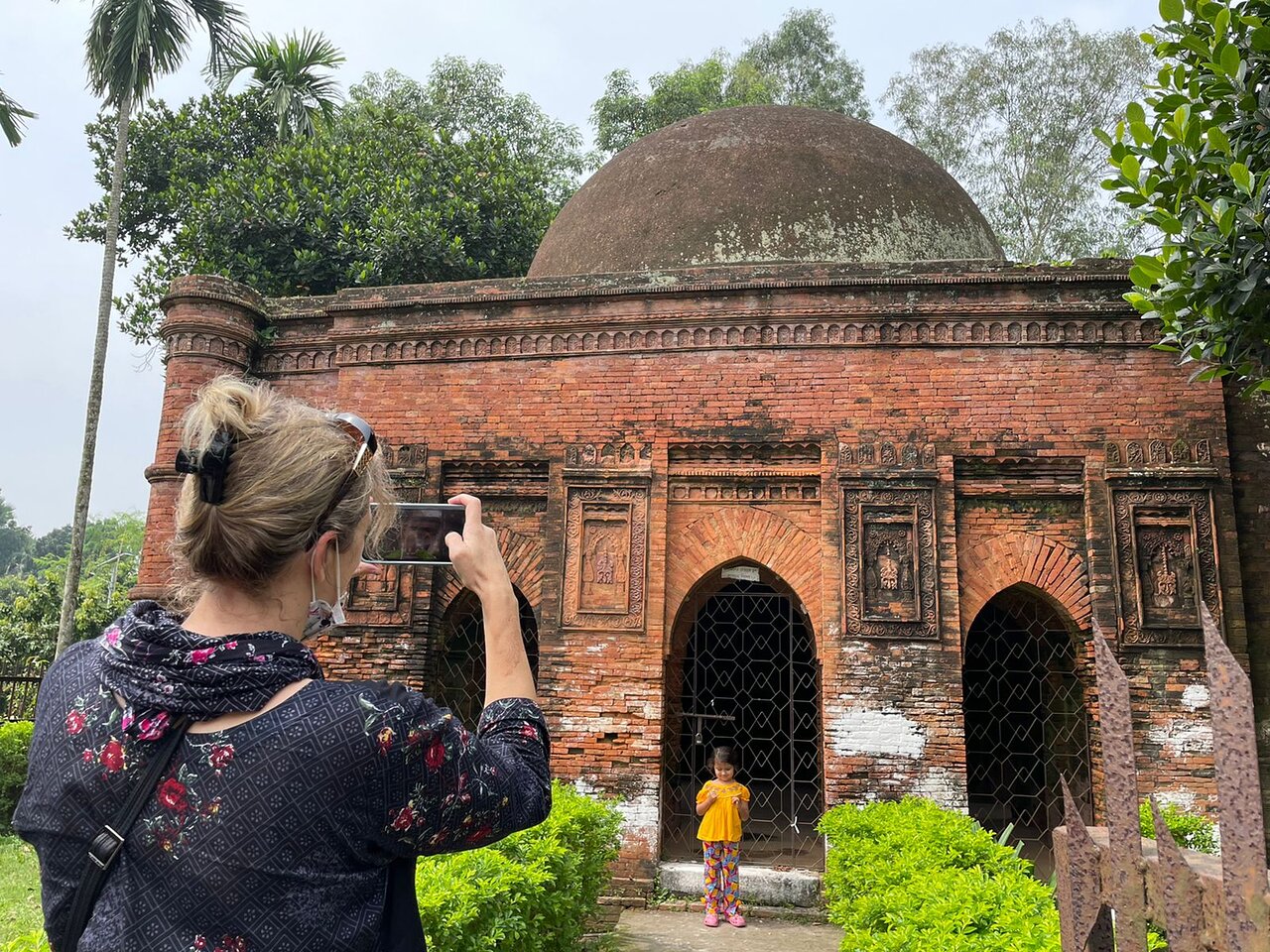 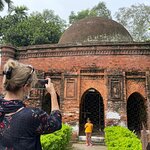 Old Capital of Bengal Sonargaon is one of the most popular tourist destinations. Just 30 km far from Dhaka, Sonargaon has a lot to offer. Historically it was the center of trading and people from Far East countries to come to do trade here. This fertile land was also famous of Dhakai Jamdani and muslin. With the glorious history, there are still some exciting tourist site from pre mogul and colonial period like the beautiful abounded panam city, the goaldi mosque, sardarbar palace, the folklore and art museum, Jamdani villages!

Jamdani was originally known as Dhakai named after the city of Dhaka, one of many ancient textile weaving centers in Bengal region.[5] Under the Mughal Empire the Persian term Jamdani came to be in popular use, since it was the court language of the Mughals. Jamdanis are popularly known as Dhakai Jamdani or simply Dhakai. The earliest mention of jamdani and its development as an industry is found into Dhaka, Bangladesh.
Jamdani is a hand loom woven fabric made of cotton, which was historically referred to as muslin. The Jamdani weaving tradition is of Bengali origin. It is one of the most time and labor-intensive forms of hand loom weaving, and is considered one of the finest varieties of muslin, and the most artistic textile of Bangladeshi weavers. Traditionally woven around Dhaka and created on the loom brocade, jamdani is rich in motifs. In the first half of the nineteenth century, James Taylor described the figured or flowered jamdani; in the late 19th century, T. N. Mukharji referred to this fabric as jamdani muslin.
Whether figured or flowered, jamdani is a woven fabric in cotton. This is a supplementary weft technique of weaving, where the artistic motifs are produced by a non-structural weft, in addition to the standard weft that holds the warp threads together. The standard weft creates a fine, sheer fabric while the supplementary weft with thicker threads adds the intricate patterns to it. Each supplementary weft motif is added separately by hand by interlacing the weft threads into the warp with fine bamboo sticks using individual spools of thread. The result is a complex mix of different patterns that appear to float on a shimmering surface. The pattern is not sketched or outlined on the fabric, but is drawn on a graph paper and placed underneath the warp. Jamdani is a fine muslin cloth on which decorative motifs are woven on the loom, typically in grey and white. Often a mixture of cotton and gold thread was used.

Built in 1519, the graceful, single-domed Goaldi Mosque is the most impressive of the few extant monuments of the old capital city, and a good example of pre-Mughal architecture. This mosque is one of the few remnants from the Sultanate period in Sonargaon, during the reign of Sultan Hussain Shah in 925 Hijri (1519 AD). It was built by Mulla Hizabar Akbar Khan in the early 16th century, during the reign of Alauddin Husain Shah at a place called Goaldi – half a mile northeast of Panam village in Sonargaon. Sonargaon was the administrative center of medieval Muslim rulers of East Bengal. It became as the capital of Bengal during Isa Khan’s ruling. The area falls under present-day Narayanganj District, Bangladesh. This mosque is more elegant and ornate in comparison to the earlier Sultanate mosques at Bagerhat.

There is a folk art and craft museum for the visitors & tourist travelling in Sonargaon. Sonargaon Folk Art and Craft Museum remains open from morning to afternoon (9 AM to 5 PM). Wednesday and the Thursday, this museum is closed for weekend. This is prosperous with several unique collection those you’ll never find at any other place. Some are lost from our country, and only those are remains. The main museum building is placed at the “Sardar Bari”. “Sardar Bari” was built by a Hindu Zamindar of Sonargaon in 1901. Alike the other Zamindar house of that period, this one also looks like Indian houses, but the shape of the house was looked like the European Palaces. The baroque decoration and the elaborated painting on the plaster of the building are really eye catching.

Panam City is situated at Sonargaon, Narayanganj in Bangladesh. It is an ancient historical city in Bangladesh. Among the three cities of boro nogor (Big City), khas Nogor, Panam City, it was most attractive city. There are many historical buildings which were built centuries ago and those are related with the history of Baro-Bhuyan. It covered 20 km area of Sonargaon. Panam City is one of the most visited tourist spots in Bangladesh. As the capital of the fifteenth-century Bengal ruler Isa Khan, and once an important trading and political center, Sonargaon boasts architecture of the Sultanate, Mughal, and colonial periods. For travelers making their way along the 2,500-kilometer Grand Trunk Road from Peshawar in the Hindu Kush, Sonargaon marked the end of the line. Threats to the site include flooding, vandalism, unauthorized occupation, illegal development etc.

As part of an education programme initiated by two friends, Christopher Lee Hesse and Mark S Fave, who wanted to give back to Bangladesh after staying there for several years, the Rishipara Mandir Paathshaala was conceived like a traditional outdoor school in the Bengal region, with a space situated in nature. Through the use of local artisan’s craftsmanship, traditional and modern forms of intermediary and indigenous technologies have been explored in this project. Bamboo has been used to revive the traditional environmentally-friendly methods of construction. The school previously held only one classroom built of corrugated iron sheets with nominal openings allowing inadequate light and ventilation; it was expected to cater to the learning needs of 85 children aged six to fourteen all at once in two shifts. The new building has three classrooms and a library room running in two shifts to accommodate approximately 98 students. The total site was 38 feet by 28 feet. At the initial stage, design workshops were held with the community to promote a sense of ownership with the design, construction and future maintenance of the school. A ‘Paint Your Own School’ workshop was held in which the children drew on the walls to increase their level of involvement with the project. Neighbours also contributed their specialised skills such as making mats and bamboo light shades.

Informacion Adicional
"Confirmation will be received at time of booking"
"Not wheelchair accessible"
"Near public transportation"
"Infants must sit on laps"
"Infant seats available"
"Not recommended for pregnant travelers"
"Most travelers can participate"
"This is a private tour/activity. Only your group will participate"

Hora de Inicio: 8:30 AM
Duración: 6 To 8 Hours
Lugar de comienzo: Traveler pickup is offered
it is a private tour , so we will pick up all the clients from their own hotels inside Dhaka city and clients you start early or little late as per their convenience