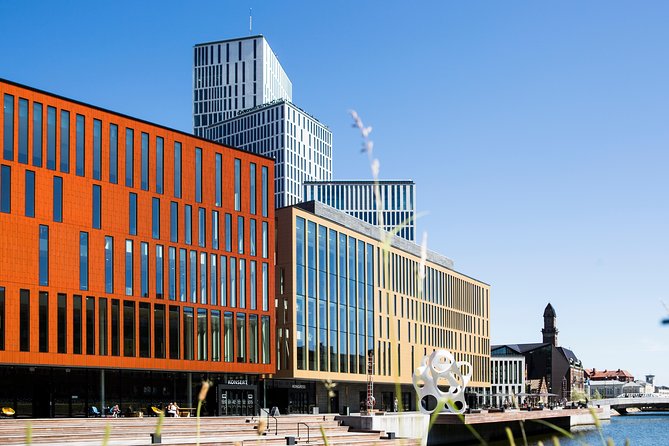 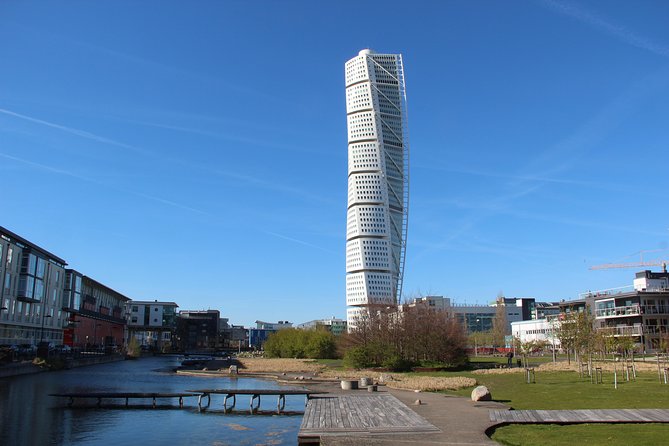 Are you short on time? Then this is the tour for you!

This is a unique taxi ride through the city to our most famous attractions. You'll be accompanied by an audio-guide which will take you through each location. The audio-guide is recorded by a local certified guide. What are you waiting for? Get going!

Stortorget is as big as 2 500 square metres. It's often used for big events, such as the annual Malmö festival for example. Horse sports and concerts are also arranged here.

But the square's history goes further back in time. Stortorget is Malmö's oldest square and was constructed by mayor Jörgen Kock in the 1530's.

Before the square was established there used to be a convent on the place, the Helgeands-convent. Stortorget quickly became the biggest trade-square in the north.

Nowadays you find a statue of king Karl X, the king who made Skåne Swedish in 1658, on Stortorget. Stortorget is also surrounded by a number of interesting remarkable buildings such as the City hall, the Residence, the house of Jörgen Kock, Hotel Kramer and the old pharmacy Lejonet ("The Lion"). In the late 16th century, a water reservoir used to supply the buildings close to Stortorgte with water. Today, there is a fountain where the reservoir used to be, as a reminder of passed centuries.

The World Maritime University (WMU) in Malmö, Sweden, is a postgraduate maritime university founded by the International Maritime Organization (IMO), a specialized agency of the United Nations. Established by an IMO Assembly Resolution in 1983, the aim of WMU is to further enhance the objectives and goals of IMO and IMO member states around the world through education, research, and capacity building to ensure safe, secure, and efficient shipping on clean oceans.

Malmö Live is an event centre in Malmö, opened in August 2015, containing a concert hall, conference facilities, a hotel, offices, and housing.

Turning Torso is a neo-futurist residential skyscraper in Sweden and the tallest building in Scandinavia. Located in Malmö on the Swedish side of the Öresund strait, it was built and is owned by Swedish cooperative association HSB. It is regarded as the first twisted skyscraper in the world

Kockums Fritid is a leisure and exercise location that you can visit that you'll pass by on your way out of Western Harbour. It has a rich history being the biggest exercise location in the old days due to Kockum, the industry.

Fiskehoddorna is located by Malmö castle and they are famous market stalls known for selling locally caught and fresh fish. They're picturesque and are usually a very nice visiting location in Malmö.

Malmöhus was originally a minor citadel whose construction was ordered in 1434 by Erik of Pomerania, king of the Kalmar Union which brought Norway, Sweden and Denmark together under a single monarch. In the 16th century King Christian III of Denmark and Norway rebuilt the citadel to create a modern defensive fortress, an imposing castle and the home of the Governors of Malmöhus County.

This is where Denmark´s money was coined in the Middle Ages, where Crown Prince Frederick of Denmark held wild parties in the 16th century and where prisoners were decapitated in the castle courtyard during the 19th century when the castle served as a prison. Today Malmöhus has been restored in the spirit of the 16th century and forms part of Malmö Museer. The castle is part of Sweden´s cultural heritage and is managed by the National Property Board.

The castle presents historical exhibitions. By Order of the King is an exhibition about the 17th-century wars over Skåne and how Skåne became Swedish in 1658. Power over People depicts the history of Malmöhus Castle over the past 300 years.

Malmö City Library first opened on 12 December 1905, then in Hotel Tunneln. At that time they had 3,096 volumes – books and periodicals. In 1946, it moved to "The Castle" at Regementsgatan. The Castle, as it had come to be known as, was originally built for Malmö Museum, and was designed by the architects John Smedberg and Fredrik Sundbärg who had been inspired by Danish and Southern Swedish renaissance castles.

Malmö City Library, as it is today, consists of three buildings. "The Calendar of light" was designed by the Danish architect Henning Larsen and was inaugurated 31 May 1997. The Castle was restored and re-inaugurated 24 September 1999. These two main buildings are linked by a building called "The Cylinder", where the entrance, an information desk, a return desk, and a cafe are located.

Saint Peter's Church is a Brick Gothic church in Malmö, Sweden. Built in the 14th century as the main church of the city, it has been described as "the main Gothic monument within church architecture in Skåne". The church was a spiritual centre during the Reformation, and was one of only a few churches in what was at the time medieval Denmark that suffered damage due to iconoclasm as a consequence of the Reformation. St. Peter's Church contains late medieval frescos of recognized high quality, as well as a number of unusual furnishings. The altarpiece, made in 1611, is one of the largest in the Nordic countries.

Informacion Adicional
"Confirmation will be received at time of booking"
"Infants must sit on laps"
"Near public transportation"
"Stroller accessible"
"Not wheelchair accessible"
"Most travelers can participate"
"This is a private tour/activity. Only your group will participate"
"Hand sanitizer available to travelers and staff"
"Gear/equipment sanitized between use"
"Transportation vehicles regularly sanitized"
"Guides required to regularly wash hands"
"Regular temperature checks for staff"
"Paid stay-at-home policy for staff with symptoms"
"Contactless payments for gratuities and add-ons"