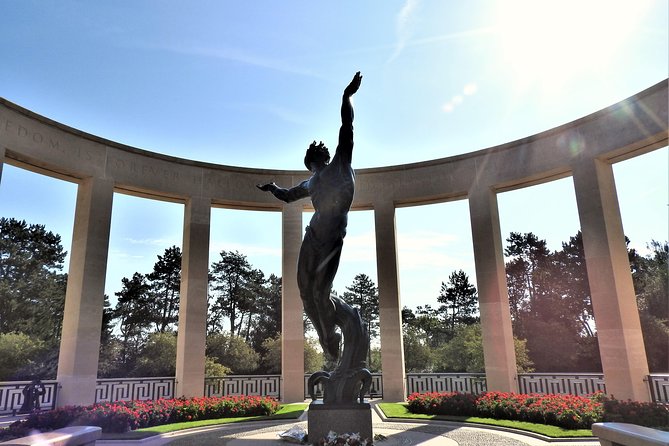 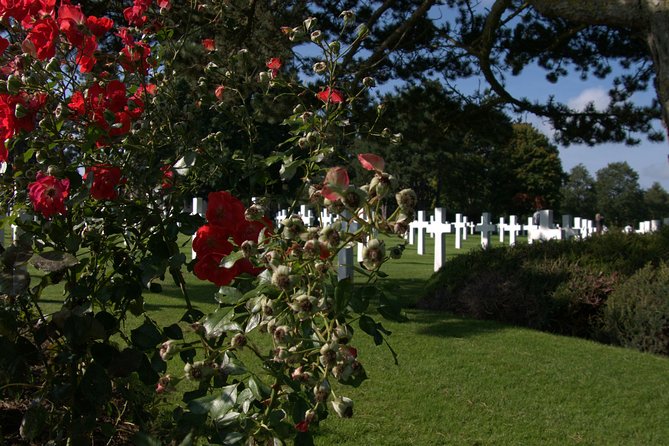 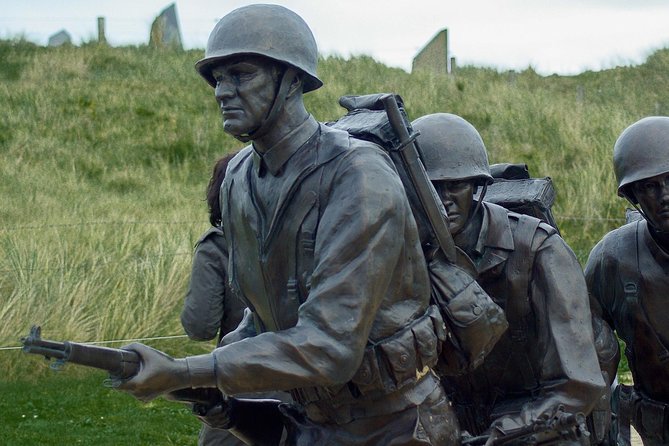 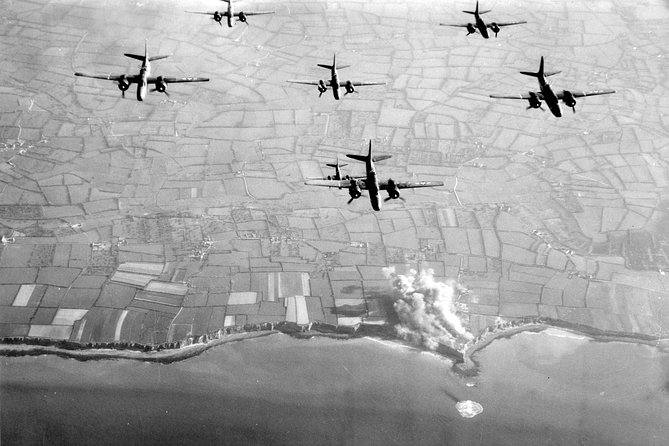 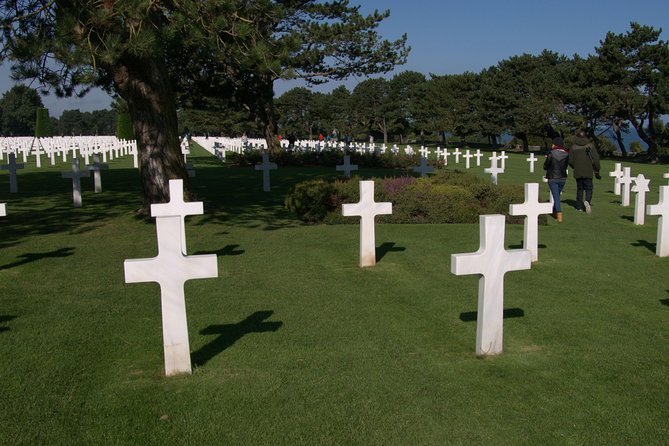 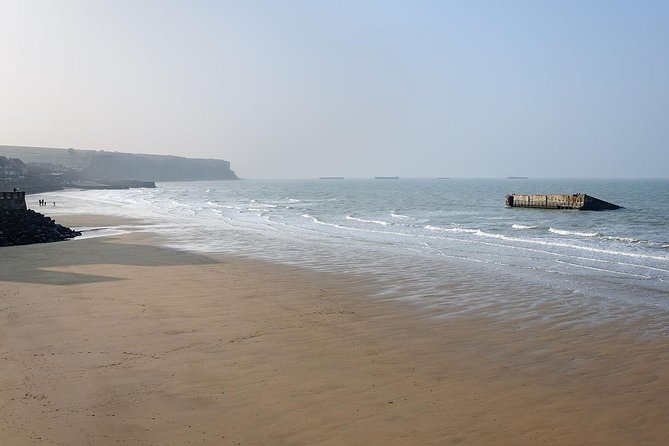 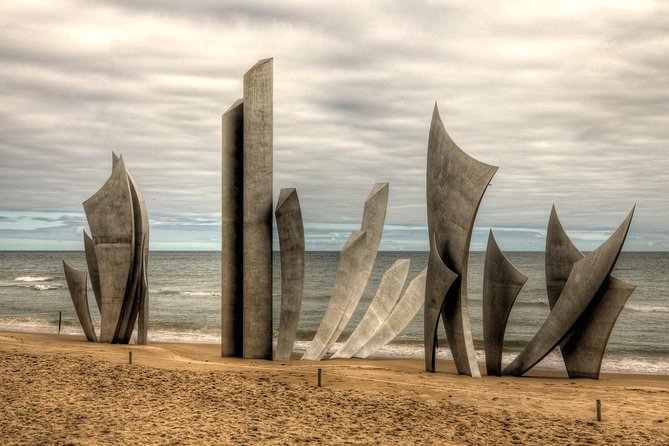 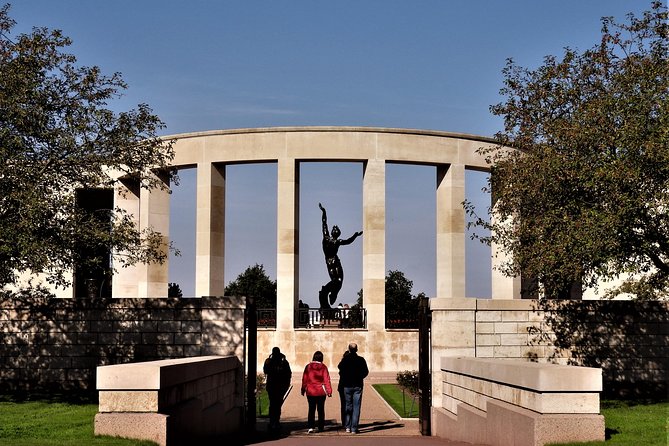 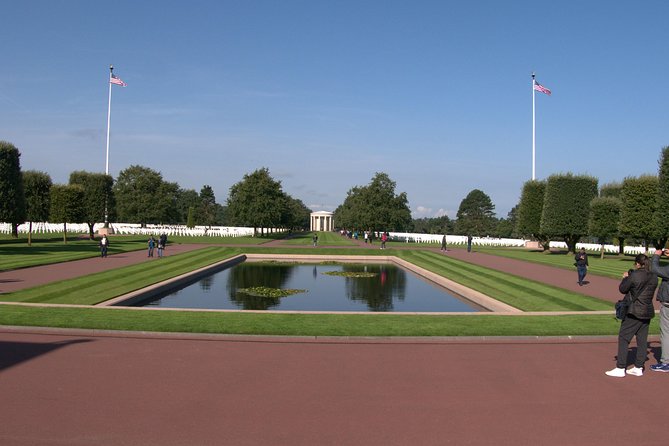 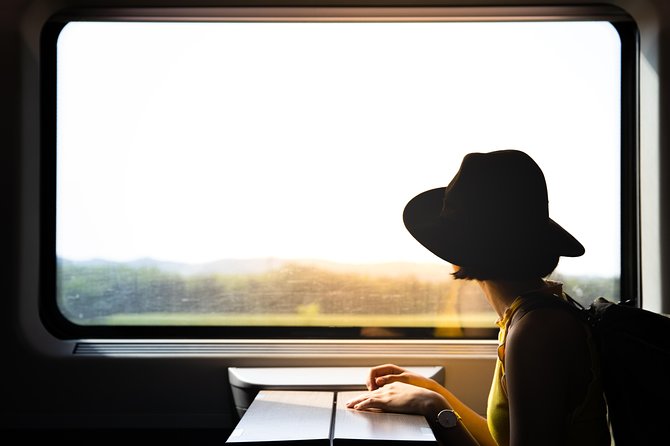 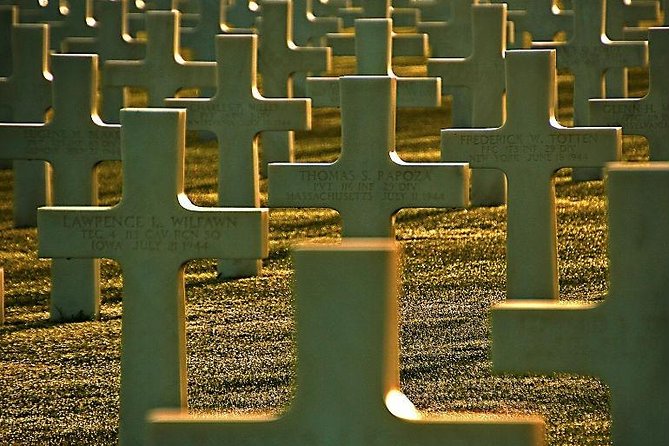 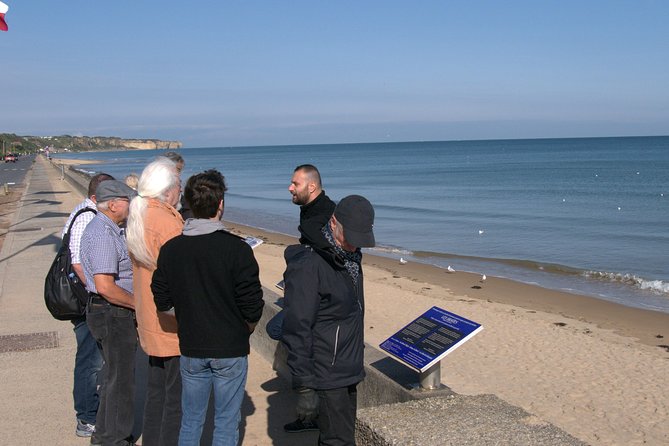 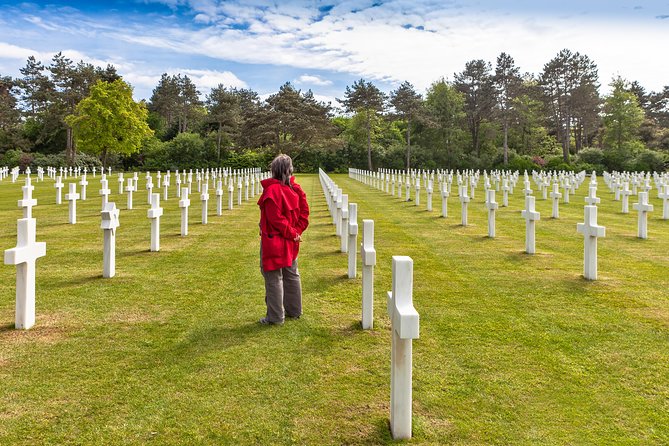 Travel from Paris to Bayeux, Normandy by train and then board a bus that will be waiting for you on your arrival. The departure of the bus is at 12h15 from Bayeux Gare.

Experience a day discovering the landing beaches in the Calvados region of Normandy. You will learn how D-Day, on 6 June 1944, became part of world history. Discover the many commemorative memorials as well as the landing beaches, including Omaha Beach; American Cemetery; Arromanches and Pointe du Hoc. These are memorable places that bear witness to the extent of the D-Day military operations. . Discover Arromanches 360 Circular cinema and watch an exceptional archive footages collected from around the world that tell the whole story of the 100 days of the Battle of Normandy.

During this day trip, you will be able to see the tombs and the names of the soldiers who fell so that the world would be at peace again. It will be an unforgettable experience that will remain forever etched in your memory.

This famous point was one of the strong points of the German fortifications. A museum set back from the headland covers the campaign here in detail. Follow the trail right around the point and you learn the moving stories of many of the individual American soldiers who took part in the attack here. The ground is still littered with German concrete defences. From the tip of the headland, with its memorial, you can appreciate just what a strategic position this was, with views stretching far to east and west.

At 14h30 : stop at Omaha Beach
Notoriously, the American troops who landed at Omaha Beach suffered the worst on D-Day.
Despite heavy losses, small groups of Americans made it up the slopes and took German positions from behind, so some gains were made, if at heavy human cost. At the end of the day, the forces that landed here suffered 3,000 casualties, of whom c.1,000 died.

At 15h15: stop at American Cemetery.
Every year, more than a million visitors come to pay homage at this beautifully sited war cemetery overlooking Omaha Beach and the sea. There are 9,387 individual crosses dedicated to American soldiers who lost their lives on D-Day and in the ensuing Battle of Normandy. The names of 1,557 men missing in action are inscribed on the Walls of the Missing. At either end of the Memorial colonnade are large maps and explanations of the main military operations. In the centre of the memorial, the striking bronze statue is entitled ‘Spirit of American Youth Risin from the Waves’. In 2007, the Normandy Visitors Centre opened on the east side of the cemetery, its museum telling the story of the D-Day Landings and Battle of Normandy.

At 17h: stop at Arromanches.

Arromanches is a very moving place. Here, in the midst of the D-Day beaches, you still get a strong sense of the huge effort involved in the Allied invasion to liberate France and the rest of Western Europe from June 1944 on. Troops deliberately did not land at Arromanches on D-Day itself, to leave the coast here clear for a portable harbour (nicknamed Mulberry Harbour) being tugged over from southern England to be put in place, free of any debris.
The port was meant to be temporary, lasting maybe three months. It served for some five months.

Despite all its sombre reminders of the shattering war effort, Arromanches has a good deal of charm, offering wonderful beach and cliff walks. Wandering around the port, you can also spot some intriguing memorials.

Informacion Adicional
"Confirmation will be received at time of booking"
"Not wheelchair accessible"
"Near public transportation"
"Infant seats available"
"Most travelers can participate"
"The agency will send you your train ticket from Paris to Bayeux by email 24H before the trip. Please check your spam or contact the supplier if you don’t receive it."
"Please read carefully the inclusions. This product does not include a guide."
"There are parts of the tour that take place outdoors. You should wear clothes and shoes that are comfortable and appropriate to the weather."
"Please consider that food and drinks are not included in the tour. We suggest the clients to bring their lunch."
"For full refund, cancellations should be made 48h before availability start time."
"This tour/activity will have a maximum of 20 travelers"