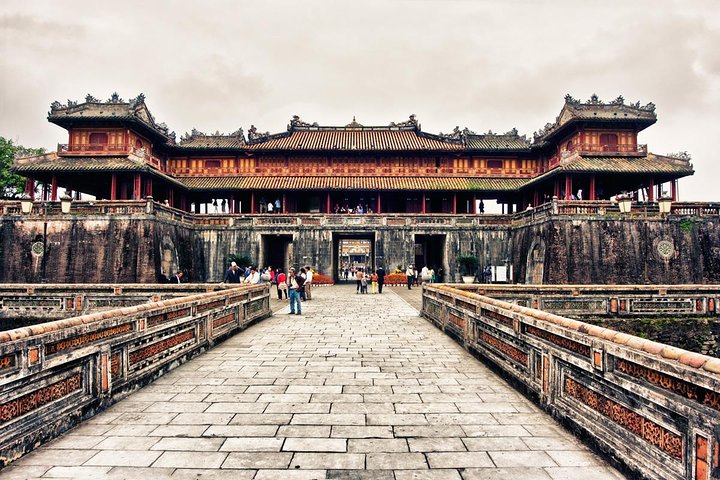 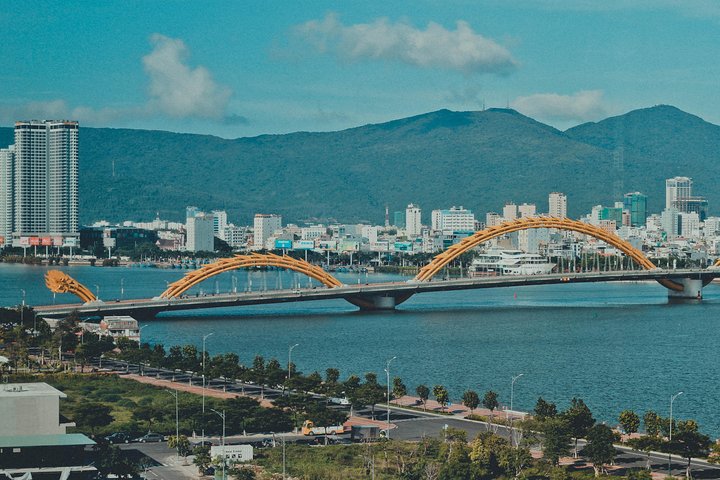 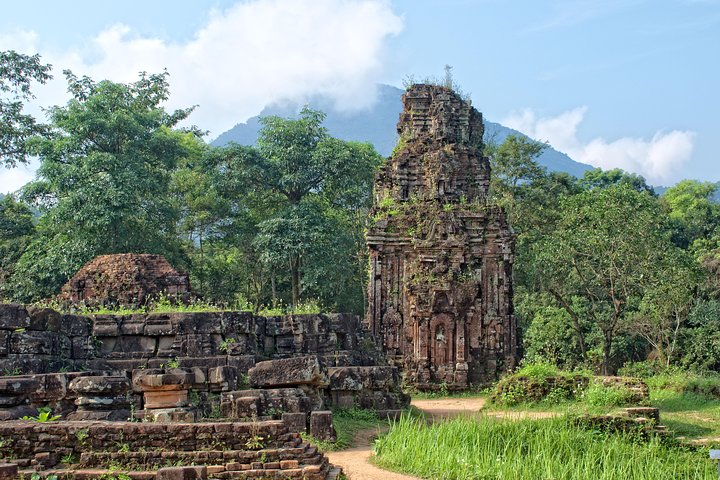 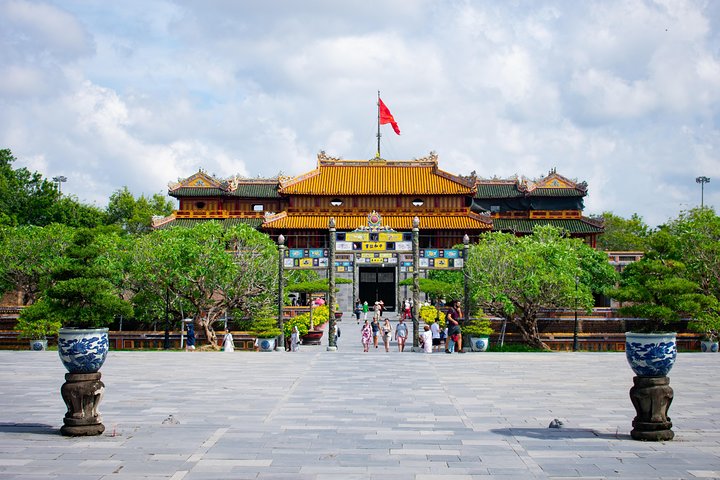 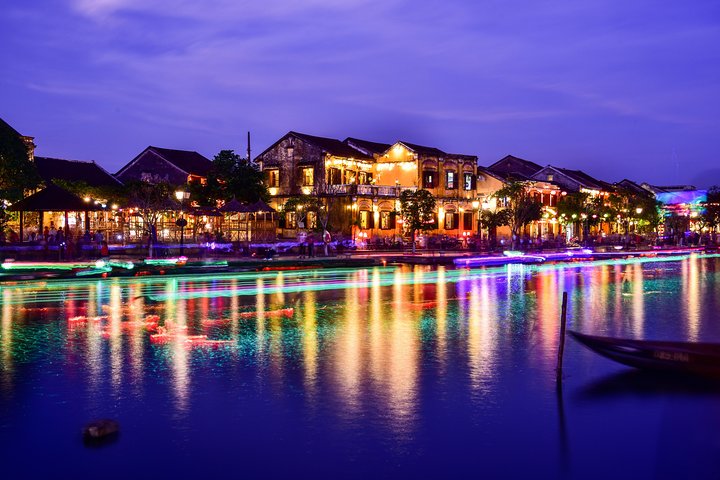 The Central Vietnam area is rich in natural history and culture. This 4 Days tour includes 3 UNESCO- designated World Heritage Sites: the 16th century silk route trading port of Hoi An, My Son valley the sacred remains of the ancient Cham civilization, and the ancient Imperial city of Hue.

There is plenty to see in Central Vietnam and this tour gets you to all the places you need to see before heading off to relax and enjoy the rest of your stay in Vietnam.

Please note this tours does not include accommodation, which gives you the flexibility to book which hotels you prefer but having the back up of a guide to ensure you get the most from each destination.

Pass By: Da Nang, Da Nang
Your tour begins with pickup from your Da Nang hotel or airport and an around 45-minute drive to Hoi An. On the way, stop to explore the Marble Mountains, stroll along China Beach, and visit the Cham Museum in Danang city.

Overnight in Hoi An on your own arrangement

Stop At: Da Nang Museum of Cham Sculpture, No 2, 2 Thang 9 Street Hái Châu District, Da Nang 550000 Vietnam
With their roots dating back as far as 192 AD, Vietnam's indigenous Cham people lived an Indian way of life in both culture and language. The Cham Museum in Danang is dedicated to this period and the Champa existence which began predominantly in the coastal areas of Vietnam

Stop At: The Marble Mountains, Hoa Hai, Ngu Hanh Son, Da Nang 550000 Vietnam
The Marble Mountains are a cluster of five hills made from limestone and marble in Da Nang. It's also a well-known pilgrimage site with peaks, caves, tunnels and temples all just waiting to be discovered. Named after the elements metal, wood, water, fire and earth, Marble Mountains exist in a coastal area that is renowned for stone-cutting and sculpture about 9km south of Da Nang.

Stop At: Hoi An Ancient Town, Hoi An 560000 Vietnam
Hoi An, once a major Southeast Asian trading post in the 16th and 17th centuries, is basically a living museum that houses old-town architecture.Some notable heritage buildings include Chinese temples, a Japanese-designed bridge, pagodas, wooden shop-houses, French-colonial houses, and old canals. Although large-scale trading had long moved elsewhere, Hoi An has been successful in preserving and restoring its charming roots and was declared a UNESCO World Heritage site in December 1999

No meals included on this day.
Accommodation included: Overnight in Hoi An on your own arrangement

Stop At: My Son Sanctuary, Duy Phu Vietnam
My Son Hindu Sanctuary, a UNESCO World Heritage Site, is a great sample of the ancient Champa civilization located in the southern part of Vietnam. It was an independent state from around the 2nd to the 17th century, at which time it was occupied by Vietnam.

Stop At: The Sa Huynh Culture Museum, 149 Tran Phu St., Hoi An Vietnam
My Son Hindu Sanctuary, a UNESCO World Heritage Site, is a great sample of the ancient Champa civilization located in the southern part of Vietnam. It was an independent state from around the 2nd to the 17th century, at which time it was occupied by Vietnam.

Stop At: Chinese All-Community Assembly Hall, 79 Tran Phu Minh An, Hoi An 560000 Vietnam
Until the end of the 18th century, Hoi An was Vietnam’s main port-of-call, and home to a large number of foreign traders. Above all, the city was popular with the Chinese, many of whom established a permanent presence among the Vietnamese. Communities from the various regions of China built Assembly Halls: social and religious buildings in which they could congregate and worship their ancestral gods.

Stop At: Japanese Covered Bridge, Tran Phu Street At the West end of Tran Phu St., Hoi An 560000 Vietnam
One of Vietnam's most iconic attractions, Hoi An's Japanese covered bridge dates back to the 18th century and is a beautiful historical piece of Japanese architecture. It is claimed that it was created by the Japanese then living in Hoi An as a way to reach the Chinese quarter across the water

Stop At: Old House of Tan Ky, 101 Nguyen Thai Hoc, Hoi An 100000 Vietnam
Built two centuries ago by an ethnically Vietnamese family, this gem of a house has been lovingly preserved through seven generations.
Duration: 15 minutes

Meals included:
•
•
Accommodation included: Overnight in Hoi An on your own arrangement

Stop At: Hue, Hue, Thua Thien - Hue Province
Head north to Hue, driving over the dramatic Hai Van pass and stopping to take in the stunning views over Lang Co beach and Danang city. Stop at Lang Co beach and enjoy lunch at a local restaurant, before continuing in Hue.

On arrival in Hue, the first stop is the Imperial Citadel, a UNESCO World Heritage Site located on the North bank of Perfume River. It is a huge complex covering an area of 520ha and comprising three circles of ramparts: the Hue Capital Citadel, Royal Citadel and Forbidden Citadel. It was said to be protected by the two sand islets: Hen islet and Da Vien islet on the Perfume River, as "dragon on the left, tiger on the right".

After lunch at a local restaurant, cross the famous Truong Tien Bridge and spend the afternoon browsing the stalls at the atmospheric Dong Ba Market.

Overnight in Hue on your own arrangement
Duration: 8 hours

Stop At: Lang Co Beach, Hue Vietnam
Situated on the central coast of Vietnam, which is famous for many beautiful beaches. Lang Co beach, since June 2009 has become an official member of the “World’s most beautiful bays” club. Today, it is a popular destination for tourists in Vietnam travel, especially for those who love beach so much.
Duration: 1 hour

Stop At: Hue Imperial City (The Citadel), Hue Vietnam
The Complex of Hue Monuments is a UNESCO World Heritage Site and is located in the city of Hue in central Vietnam. Hue was founded as the Vietnam capital city by Gia Long, the first king of the Nguyen Dynasty in 1802. It held this position for nine Nguyen dynasties until 1945

Meals included:
•
•
Accommodation included: Overnight in Hue on your own arrangement

Your tour ends with a transfer to Phu Bai airport.
Duration: 3 hours

Stop At: Thien Mu Pagoda, Kim Long Road Huong Long Village, Hue 532761 Vietnam
Built on a hill overlooking the Song Huong (Perfume River), 4km southwest of the Citadel, this pagoda is an icon of Vietnam and as potent a symbol of Hue as the Citadel.
Duration: 30 minutes

Informacion Adicional
"Confirmation will be received at time of booking"
"Please advise any specific dietary requirements at time of booking"
"Children (2-11yrs) - 75% of applicable adult fare"
"Please contact local operator if request assistance to Book Accommodation(best price and non commission)"
"Not wheelchair accessible"
"Most travelers can participate"
"This is a private tour/activity. Only your group will participate"