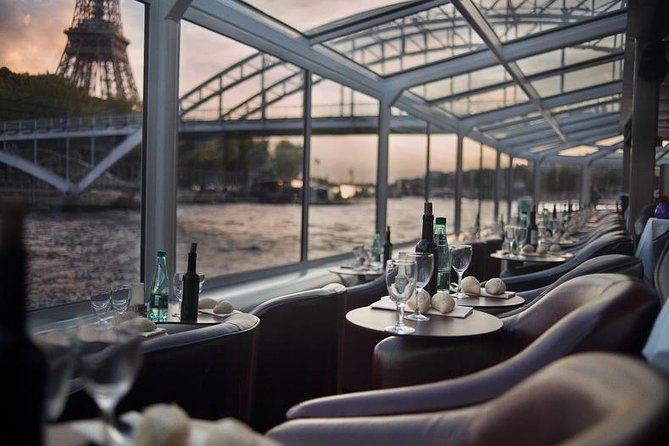 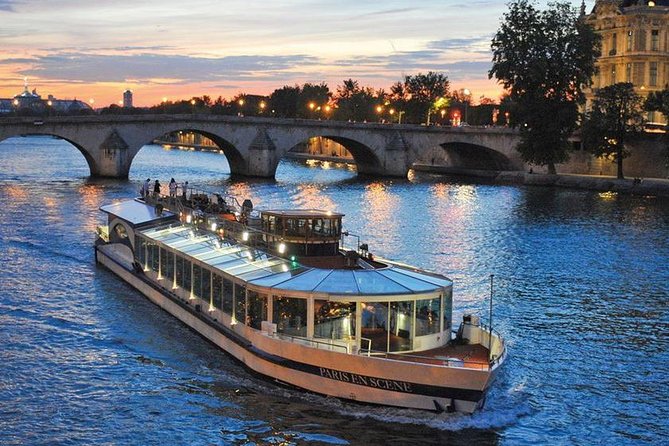 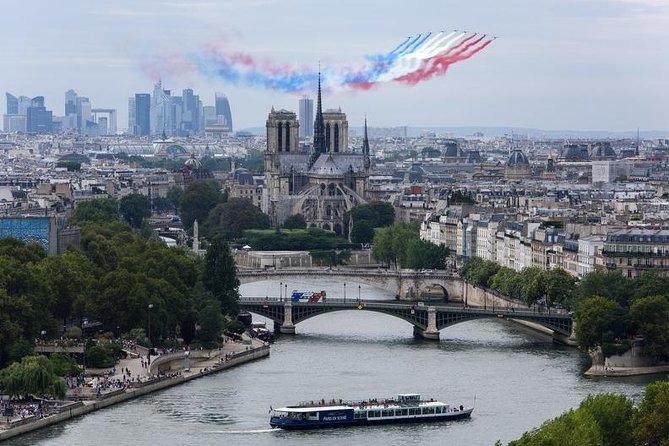 For those tight on time, this 75-minute Seine River cruise is perfect. Discover Paris' glittering waterfront sights in a relaxed, casual setting, and enjoy dinner with a view. Board a boat on Ile de la Cité, the epicenter of Paris, and cruise past Notre Dame Cathedral, the Louvre, Place de la Concorde, the Eiffel Tower and more famous attractions. Savor a simple 3-course meal from the comfort of your window-facing armchair, and upgrade to include wine or Champagne.

The Gothic masterpiece that is Notre-Dame cathedral is France’s most visited monument. Builders began work on the cathedral ordered by Bishop de Sully in 1163, under the watchful eye of King Louis VII. Its construction would go on to see four key stages from the 12th to the 18th century. The cathedral suffered significant damage during the French Revolution and was subsequently restored in the 19th century by the architect Viollet-le-Duc… after having been the venue for Napoleon's coronation in 1806! Whilst it may not be France's largest cathedral, Notre-Dame remains a very impressive architectural monument: 130m long, 48m wide, with a height of 69m for the towers and 96m for the spire. The interior is every bit as splendid, with a ceiling height of 43m. Distances by road in France are calculated from the point 0 located on the square.

The Institut du Monde Arabe is a symbol of the dialogue between Western culture and the Arab world, and was opened to the public in December 1987. The building was designed and built by a team of architects, Jean Nouvel, Architecture Studio, Gilbert Lèzenes and Pierre Soria

Etienne Marcel constructed the first town hall in 1357. In the 16th century, Francois I ordered it to be rebuilt in the Renaissance style and it was extended in 1850. A number of renowned artists were commissioned to decorate the building: Delacroix, Ingres, Lehmann, Cabanel. The town hall was rebuilt in after being invaded by the Paris Commune in 1870. The central pediment has a dock flanked by the figures of Work and Instruction and the Seine and Marne rivers, with the City of Paris on top.

(L’île de la Cité) Paris’ first royal palace, the Palais de la Cité, which is made up of the Conciergerie and the Sainte-Chapelle, enjoyed its heyday in the times of the Capetian kings. In fact, in the 16th century in particular, Philippe le Bel extended and transformed it into medieval Europe's most lavish royal palace. However, from the reign of Charles V in the late 14th century, the Kings of France began to abandon the Palais de la Cité for the Louvre and Vincennes. They left the old palace in the hands of the Concierge, who was a person with significant policing and legal powers.

The Pont des Arts has connected the Institut de France and the Louvre since 1804. With nine arches and constructed from iron, this was the first metal bridge built in Paris. The bridge was destroyed for safety reasons and then rebuilt in 1983. An unusual tradition started on the bridge in 2008: lovers fxing padlocks to its railings with their names engraved on them.

The Louvre, a former royal palace and the most visited museum in the world, is also Europe’s largest palace covering an area of 135,000m². The 12th century fort has an outer wall which used to surround and protect the city, and has performed many different roles over the centuries. François I and Louis XIV resided there before it was made a museum in 1793. These days, the museum is dedicated to the period from the Middle ages to 1848 and split into eight sections: paintings, sculptures, Greek, Oriental, Etruscan, Egyptian and Roman antiquities, Islamic art objects and graphic arts from the Middle Ages to 1848. No fewer than 35,000 world-renowned works are on display at the Louvre. The museum is also famous for its large glass and steel pyramid Standing 21 meters tall, the pyramid was commissioned by François Mitterand and built in1983 in the Cour Napoléon. It is surrounded by three small pyramids and an inverted pyramid is situated below the Carrousel shopping center.

The place de la Concorde was designed in the 18th century by architect Ange Gabriel. lt was previously known as the place Louis XV as a statue of the king astride his horse presided over the square. During the Revolution, it was renamed “Place de la Révolution”. The guillotine was set up on the square and in fact this is where Louis XVI and Marie-Antoinette met their deaths. Nowadays, you will find an obelisk, a gift from the King of Egypt, flanked by two impressive fountains, one representing the ‘Rivers’ and one representing the "Seas”.

The Stature of Liberty, the Grand Palais and the Pont Alexandre IIII make up a trio of works that were designed especially for the World's Fair in 1900. In 1902, it was converted into a museum of fine arts. It took more than twenty years, from 1903 à 1925, to complete the decorative painting and sculptures designed to glorify the City of Paris and celebrate the benefits of art.

With its extraordinary architecture combining steel, stone and glass, the Grand Palais was an absolute triumph at the World's Fair in 1900. In 1975, the nave, which has become a symbol of the monument, was classified as a historical monument. It holds 450,000 m3 of air space and covers an area of 13,500 m2, creating a glass vault in the air, spreading across an immense sky

The “Iron Lady" was built by Gustave Eiffel for the 1889 Worid's Fair, which marked the first centenary of the French Revolution. This elegant structure incorporates more than 10,000 tonnes of steel and stands 325mhigh, and took just two years and two months to build, an incredible technical and architectural feat. The tower was only supposed to last 20 years but was saved when Eiflel began to use it for the scientific experiments that he supported, in particular the first radio, then telecommunications transmissions, AS Frances symbol in the werld, and the chowcase of Panis, iris the world's most visited paid monument - more than 250 million visitors have come from all over the globe to see it since it opened in 1889.

The Pont de l'Alma, which was inaugurated by Napoleon III in 1856, commemorates the battle of the Alma (1854) in the Crimea. On the old bridge, each of the pillars was decorated with a Zouave and a grenadier and a skirmisher and an artilleryman, but only the Zouave remains. The public use the statue of the Zouave as a way of measuring the water levels of the Seine: once the water has risen to the level of the Zouave's thighs, the Seine is no longer navigable.

Inaugurated for the Paris World’s Fair in 1900, the Pont Alexandre Ill represents a true message of peace between France and Russia. The bridge's decorative features are classified as a historical monument, with bronze winged horses and the four water spirits adorning its pylons. At the center of the bridge, upriver, the Nymphs of the Seine surround the arms of Paris, Downriver, the Nymphs of the Neva surround the arms of Russia.

The Palais Bourbon was erected from 1722 to 1728, by the Duchess of Bourbon-Condé, the daughter of King Louis XIV, and would remain in Condé hands until the Revolution. The central part of the building underwent a vast renovation program from 1828. When the July Monarchy took over the palace and expanded it, some of the greatest names in French fine arts, foremost among them Eugène Delacroix, came together to create the Palais Bourbon as we know it today. The Palais Bourbon is the seat of the French national assembly.

The Musée d'Orsay was built in the old Gare d'Orsay. The construction of the station had been completed in 1900, for the World's Fair. It was managed by the Orléans railway company and used to serve central and South West France. The collections focus on Western painting and sculpture from 1848 to 1914, but also include decorative arts, photography and architecture.

The Institut de France is the “Protector of arts, letters and sciences”. It is housed in one of the capital's most beautiful buildings: the old college des Quatre-Nations, which was founded by Cardinal Mazarin between 1662 and 1688. Since 1795, it has been home to five academies: The French Academy and the Academies of Humanities, Science, Fine Arts, and Moral and Political Science.

This is actually the oldest bridge in Paris. It is wider than its peers, built with pavements you could move about on without fear of getting dirty or being run over, in stone rather than wood, without a roof over the top or buildings along the sides - a real first! The Pont Neuf is a Paris institution, thanks to its history, classical architecture and the unusual profile of-its half-moon turrets and comics decorated with “macaroons The Pont Neuf has had historical monument status since 1894 and UNESCO World heritage status since 1991.

Informacion Adicional
"Confirmation will be received at time of booking"
"Minimum age to drink alcohol is 18"
"Vegan menu available"
"Not wheelchair accessible"
"Near public transportation"
"Most travelers can participate"
"This experience requires good weather. If it’s canceled due to poor weather, you’ll be offered a different date or a full refund"
"This experience requires a minimum number of travelers. If it’s canceled because the minimum isn’t met, you’ll be offered a different date/experience or a full refund"
"This tour/activity will have a maximum of 210 travelers"