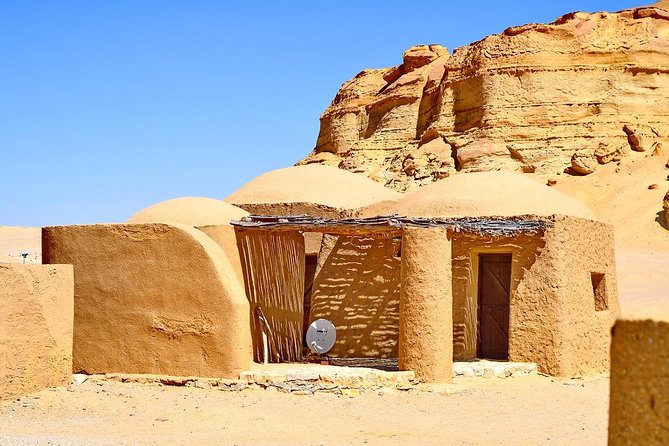 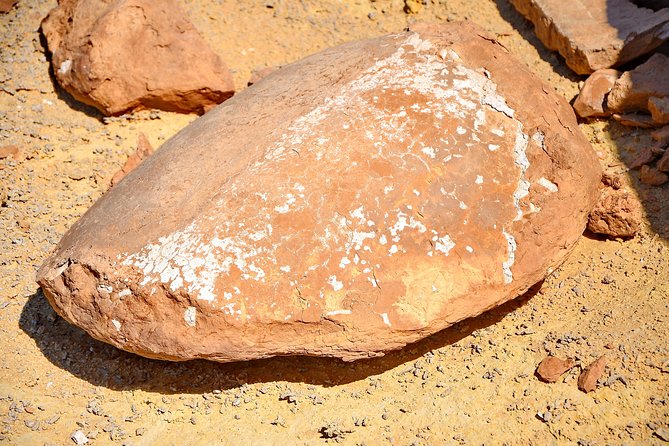 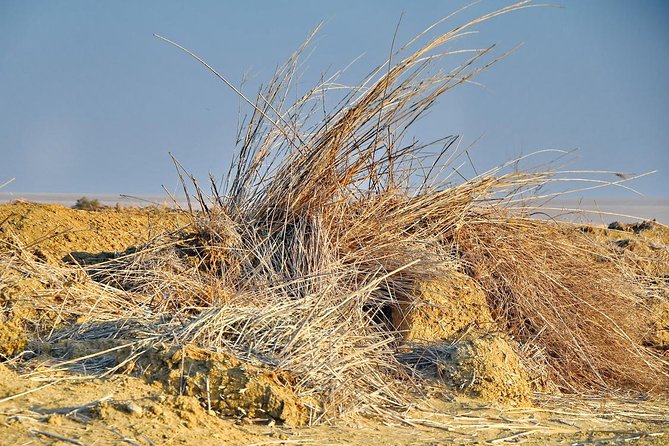 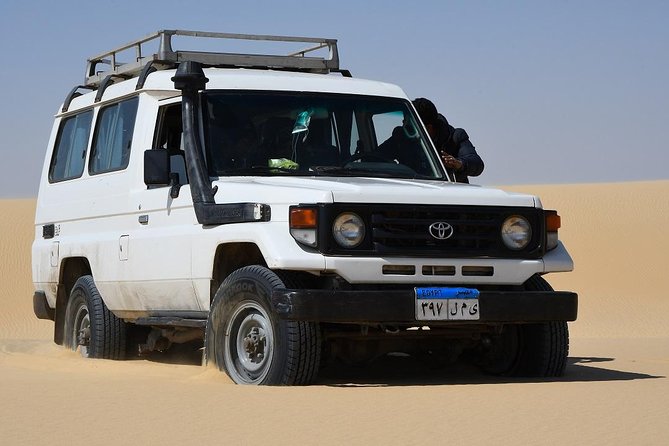 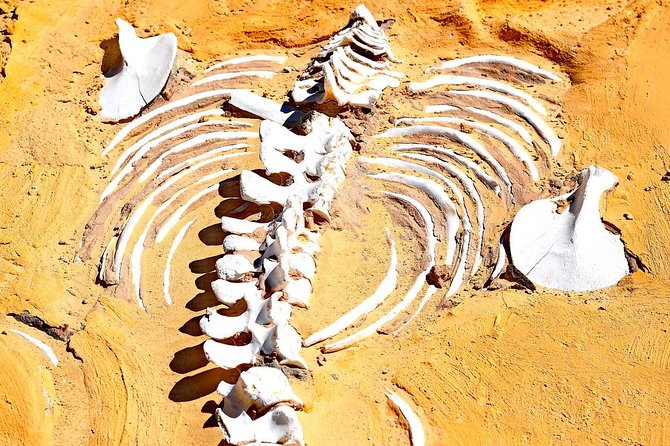 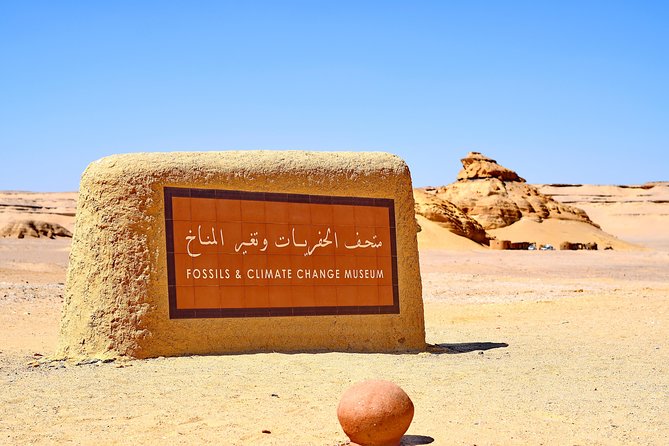 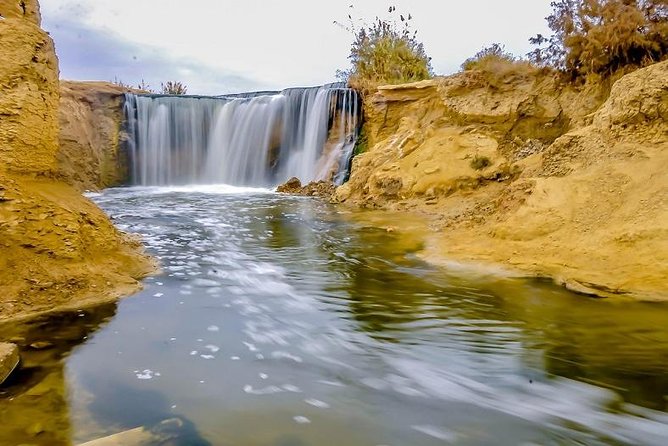 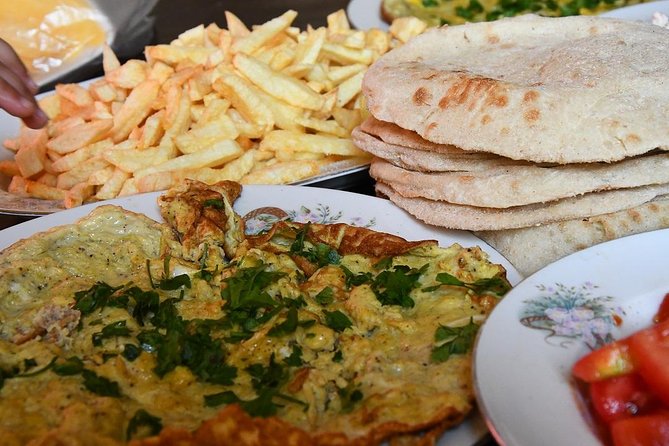 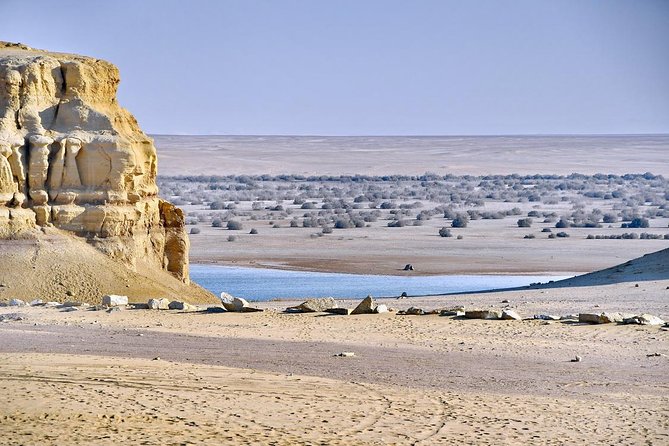 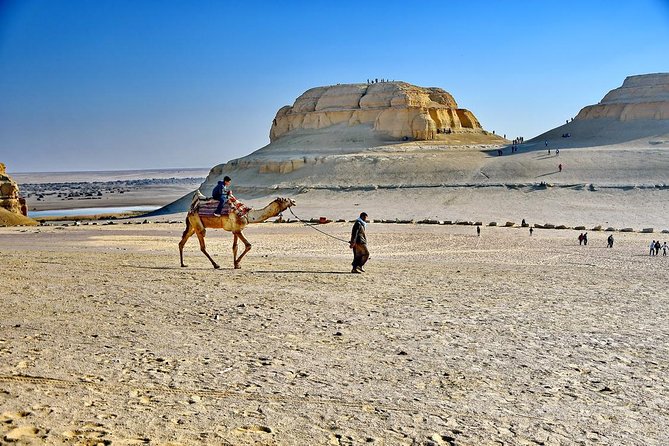 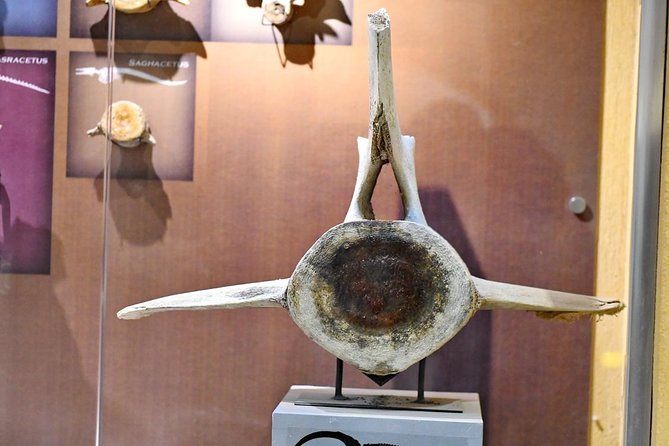 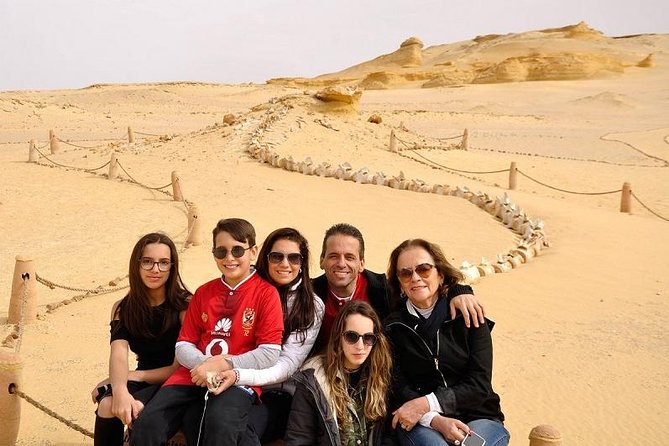 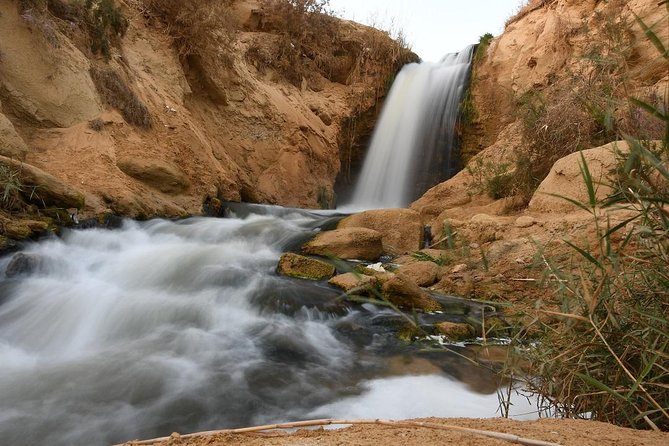 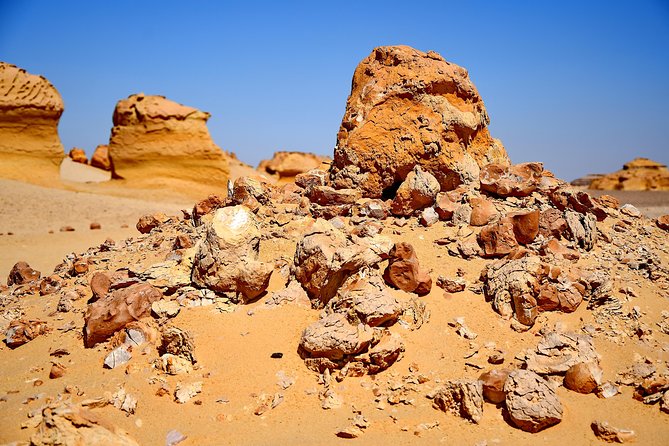 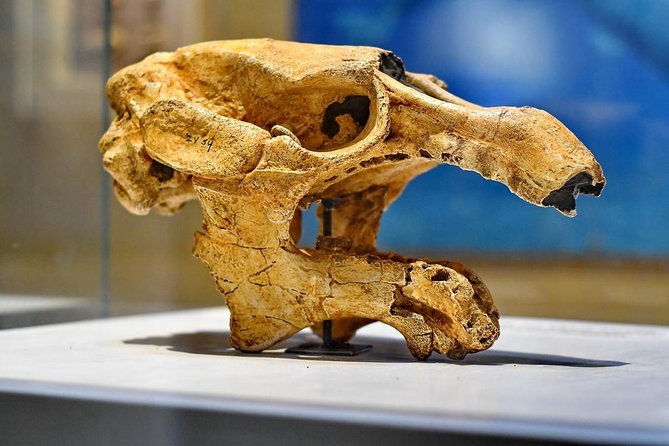 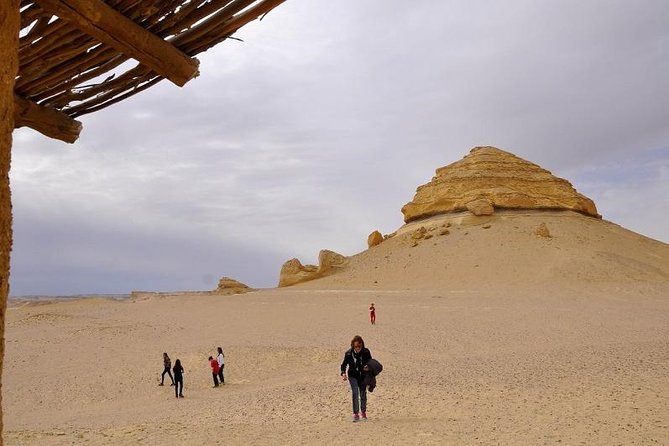 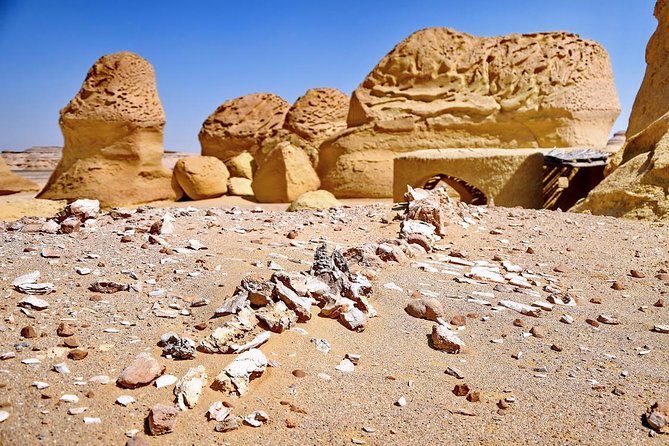 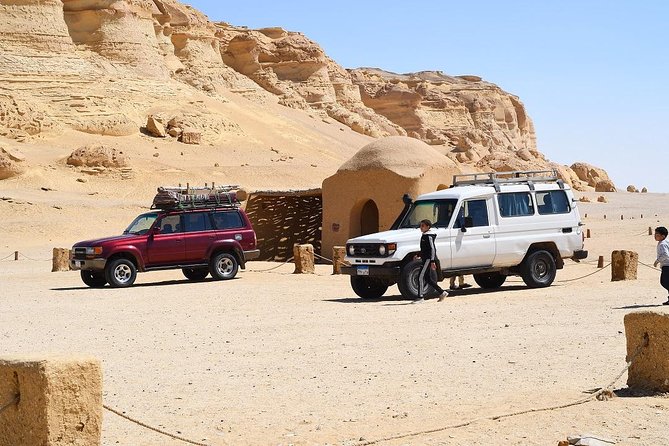 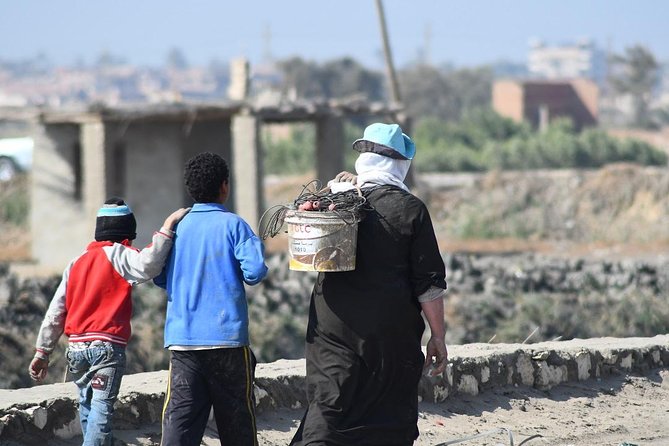 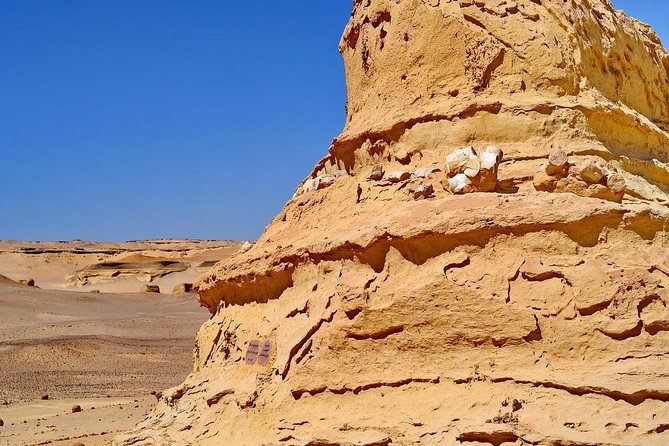 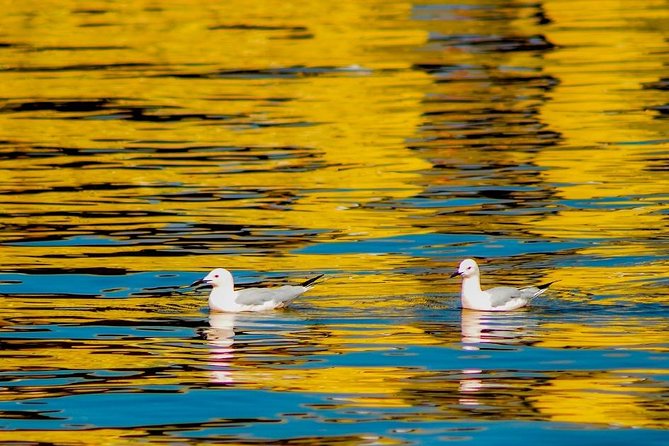 Pick up at 7:30am. Private full day trip to Wadi Elhitan with our 4W Jeep safari. Visit lake Qaroon, valley of Rayyan, Mudawara mountain, we drive by the green fileds & the lake with stops to enjoy, capture, and watch bird life. Visit the valley of the whales at Wadi Elhitan, tour the fossils museum, and the fossils track.

Wadi Al-Hitan "Whale Valley" is a paleontological site in the Faiyum Governorate of Egypt, some 150 km southwest of Cairo.[1] It was designated a UNESCO World Heritage Site[2] in July 2005[3] for its hundreds of fossils of some of the earliest forms of whale, the archaeoceti (a now extinct sub-order of whales). The site reveals evidence for the explanation of one of the greatest mysteries of the evolution of whales: the emergence of the whale as an ocean-going mammal from a previous life as a land-based animal. No other place in the world yields the number, concentration and quality of such fossils, as is their accessibility and setting in an attractive and protected landscape.[4] This is why it was added by the UNESCO to the list of protected World Heritage sites.[5]

The fossils found at the site may not be the oldest but their great concentration in the area and the degree of their preservation is to the extent that even some stomach contents are intact. The presence of fossils of other early animals such as sharks, crocodiles, sawfish, turtles and rays found at Wadi El-Hitan makes it possible to reconstruct the surrounding environmental and ecological conditions of the time, adding to its justification to be cited as a Heritage site.

The first fossil skeletons of whales were discovered in the winter of 1902-3.[1] For the next 80 years they attracted relatively little interest, largely due to the difficulty of reaching the area. In the 1980s interest in the site resumed as four wheel drive vehicles became more readily available. Continuing interest coincided with the site being visited by fossil collectors, and many bones were removed, prompting calls for the site to be conserved. The remains display the typical streamlined body form of modern whales, yet retaining some of the primitive aspects of skull and tooth structure. The largest skeleton found reached up to 21 m in length,[6] with well-developed five-fingered flippers on the forelimbs and the unexpected presence of hind legs, feet, and toes, not known previously in any archaeoceti. Their form was serpentine and they were carnivorous. A few of these skeletal remains are exposed but most are shallowly buried in sediments, slowly uncovered by erosion. Wadi El-Hitan provides evidences of millions of years of coastal marine life.

The valley of Wadi El-Rayan is an area of 1759km2, 113km2 of which are the dominating water body of the Wadi El Rayan lakes. It is located about 65km southwest of Faiyum city and 80km west of the Nile River. The Wadi has been used for man-made lakes from agricultural drainage which has made a reserve of the two separate Wadi El Rayan Lakes. The reserve is composed of a 50.90km2 upper lake and a 62.00km2 lower lake, with waterfalls between the two. Among the springs, there are three sulphur springs at the southern side of the lower lake, with extensive mobile sand dunes. Wadi El Rayan Waterfalls are considered to be the largest waterfalls in Egypt.

At the south and southeast of the springs is Gabal Manqueer Al Rayan, where marine fossils and archeological remains are found. Gabal Madwera, near the lower lake, is known for its extensive dune formations.

In the northwest is Wadi El Hitan, a protectorate containing fossils of extinct whales.

The Faiyum Oasis (Waḥet El Fayyum) is a depression or basin in the desert immediately to the west of the Nile south of Cairo in Egypt. The extent of the basin area is estimated at between 1,270 km2 (490 mi2) and 1700 km2 (656 mi2). The basin floor comprises fields watered by a channel of the Nile, the Bahr Yussef, as it drains into a desert depression to the west of the Nile Valley. The Bahr Yussef veers west through a narrow neck of land north of Ihnasya, between the archaeological sites of El Lahun and Gurob near Hawara; it then branches out, providing rich agricultural land in the Faiyum basin, draining into the large saltwater Lake Moeris (Birket Qarun).[1] The lake was freshwater in prehistory but is today a saltwater lake.[1] It is a source for tilapia and other fish for the local area.

Differing from typical oases, whose fertility depends on water obtained from springs, the cultivated land in the Faiyum is formed of Nile mud brought down by the Bahr Yussef, 24 km (15 miles) in length. Between the beginning of Bahr Yussef at El Lahun to its end at the city of Faiyum, several canals branch off to irrigate the Faiyum Governorate. The drainage water flows into Lake Moeris.

Duración: 8 To 10 Hours
Lugar de comienzo: Traveler pickup is offered
Pick up at 7:30am, It can be from any address within Cairo & Giza, from any hotel within Cairo or Giza, can be also from Giza train station.