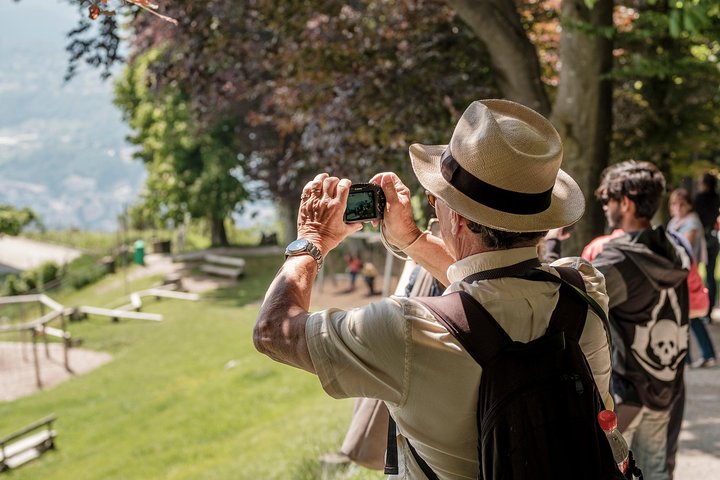 From the heart of the city to the sunniest peak of Lugano. You'll enjoy the splendid view and walk through the tiny village of Brè.

From the city’s heart, you will reach the station in Cassarate by walking, just in time to take the panoramic funicular , enjoy the splendid view of the city centre, gradually expanding at your feet as you reach Lugano’s most uncontaminated summit.

You will take a stroll through the small village of Brè, where life runs at a slow pace as in the past, taking a look at the typical Ticinese houses, the church and the works of art.

Attention: until further notice, the route Lugano centro - Cassarate will take place on foot not by boat.

Piazza Riforma: With its many bistros and restaurants, Piazza della Riforma is the city’s main place of encounter.

Throughout the year several different events, including Easter in the City, Estival Jazz, Blues to Bop, Autumn Festival and Christmas in the Square, take place here. But in the past, when the square was called Piazza Grande, it was the scene of several political events. In fact, the 15th February 1798 was a chaotic day of fighting, at the end of which, despite initial success, the enemy was pushed back by the Lugano partisans. The most enlightened members of the bourgeois took advantage of events to finally achieve long-sought independence for the town, buoyed by the slogan “Free and Swiss”. At Zurich the twelve cantons proclaimed Canton Ticino’s independence and on 16 February the citizens erected the tree of liberty in Piazza Grande. In 1830, the square took on its current name thanks to the constitutional reform.

Appreciate the splendor of Monte Rosa, the Bernese and Vallese Alps as seen from the top of Switzerland's sunniest mountain.

Ever since 1908, a cable railway has brought visitors, in a quarter of an hour, from Cassarate to Mount Bré (933metres above sea level), a locality offering many opportunities to the visitor: a big, well equipped picnic area, where it is possible to grill food, walks that are accessible to families even with small children and more difficult mountain hikes.

The village of Bré has kept intact its characteristic of ancient rural village, and in time, numerous artworks have also embellished it. You will find the works by Pasquale Gilardi, also called Lelèn, the frescoes by Joseph Birò in the Church of San Fedele, the Schmid Museum with the works, which the artist left, together with his home, to his Municipality of adoption and an open air museum consisting in the works of Aligu Sassu, Armando Losa, Emilio Rissone, Giuliano Togni, Giancarlo Tamagni, Piergiorgio Piffaretti and others.

Of course, there are also restaurants, tiny and large grotti with panoramic terraces that offer a bird’s eye view of the Lake of Lugano and of its surrounding mountains.

The town of Brè has maintained its characteristics of ancient rural village and has gradually enriched itself with numerous artistic works.

The decoration of the town centre with several artworks has the intent of getting a vaster public acquainted with this charming village, where such artists like Pasquale Gilardi (1885-1934), Wilhelm Schmid (1892-1971) and Josef Birò (1887-1975) lived. The artistic path starts in the square in front of the church, passes through the centre of Brè and offers visitors the opportunity of admiring the artworks of famous artists, renowned both at the national and international level. Besides the town’s artistic decoration, at Brè it’s possible to admire many other noteworthy works of art. The Wilhelm Schmid Museum, the house where the homonymous artist used to live (1892-1971), hosts an important collection of the works of the only Swiss painter who was an exponent of “Magic Nordic Realism”.

There are also several restaurants and grotti with panoramic terraces offering a superb view of the Lake of Lugano and of the surrounding mountains. The region of Mount Brè, moreover, offers an infinite number of itineraries both for hikers and mountain bike lovers that differ greatly from each other in terms of beauty and difficulty.

Informacion Adicional
"Confirmation will be received at time of booking"
"Travelers should have a moderate physical fitness level"
"Not wheelchair accessible"
"The guide will speak the two prevalent languages in your group"
"In case of bad weather, the guide reserves the right to cancel or end the tour early"
"This tour/activity will have a maximum of 30 travelers"
"Face masks provided for travelers"