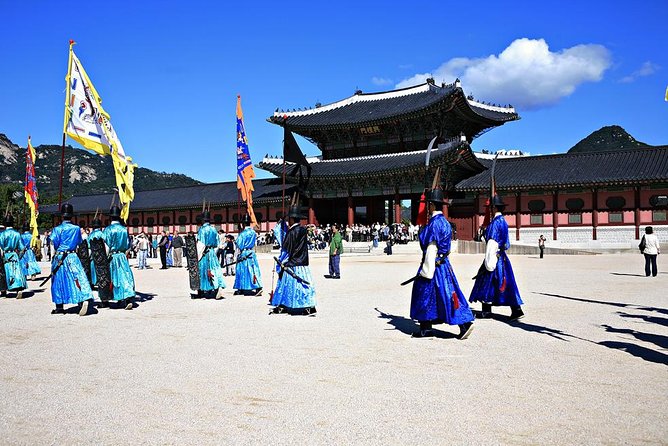 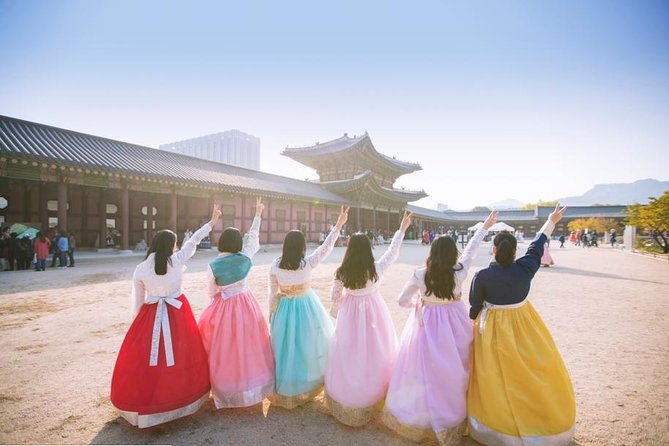 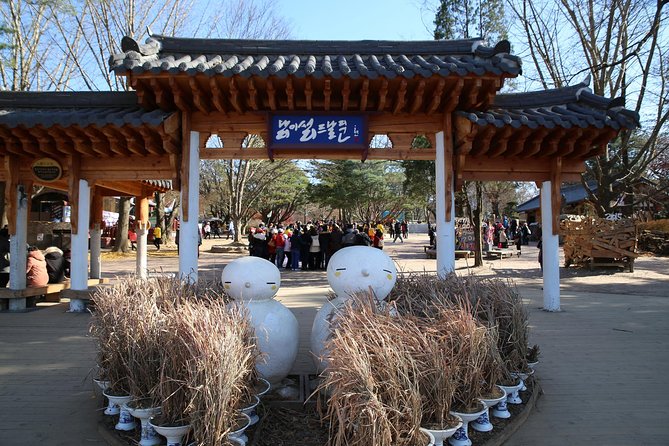 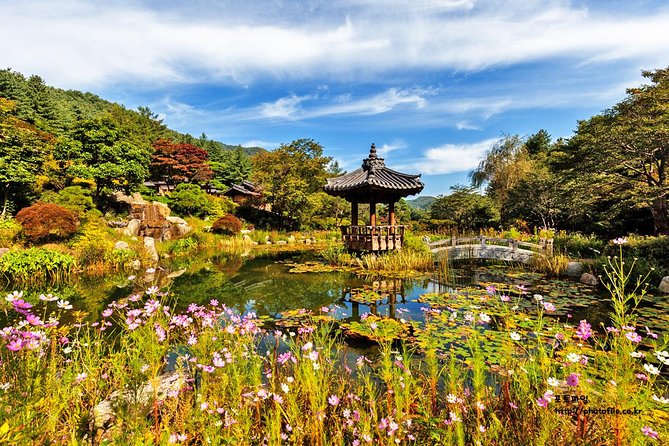 This is tour that is recommend for first time traveler to Korea.
Because itinerary scheduled with most recommended and famous places in Seoul Korea.
Don't worry about wasting time where to go and not to go.
We will care you with safe and make satisfying tour ever.

Stop At: Bukchon Hanok Village, 37, Gyedong-gil, Jongno-gu, Seoul 03059 South Korea
Bukchon Hanok Village is a Korean traditional village in Seoul with a long history located on the top of a hill between Gyeongbok Palace, Changdeok Palace and Jongmyo Royal Shrine. The traditional village is composed of lots of alleys, hanok and is preserved to show a 600-year-old urban environment.
Duration: 1 hour

Stop At: Myeongdong Shopping Street, Jung-gu, Seoul South Korea
Myeong-dong is one of the primary shopping districts in Seoul. The two main streets meet in the center of the block with one beginning from Myeong-dong Subway Station (Seoul Subway Line No. 4) and the other from Lotte Department Store at Euljiro. Many brand name shops and department stores line the streets and alleys.
Duration: 2 hours

Stop At: Nami Island, 1, Namiseom-gil, Namsan-myeon, Chuncheon, Gangwon-do 24464 South Korea
Namiseom Island was formed as a result of the construction of Cheongpyeong Dam. It is a half moon-shaped isle, and on it is the grave of General Nami, who led a great victory against the rebels in the 13th year of the 7th king of the Joseon Dynasty, King Sejo (reign 1455-1468).

Namiseom Island is 63 kilometers away from Seoul in the direction of Chuncheon, and is famous for its beautiful tree lined roads. The island is 30 minutes away from Chuncheon and an hour away from the suburbs of Seoul. Since it is not far from Seoul, many couples and families come to visit.

A special feature of Namiseom Island is that there are no telephone poles. This is because all electric wires were built underground to keep the natural feeling of the landscape. The island is 553,560 square yards with chestnut trees and poplar trees throughout.

In the middle of the isle, there is a grass field about 316,320 square yards. It features education and training facilities and camping sites. The island also has a swimming pool and water-sports facilities for motorboats and water skiing, as well as a theme park with a merry-go-round, shooting range, and roller skating rink. Lodging facilities such as resort villas and bungalows are available for visitors to stay on the island.
Duration: 3 hours

Stop At: The Garden of Morning Calm, 432 Sumokwon-ro, Sang-myeon, Gapyeong-gun, Gyeonggi-do 12448 South Korea
The Garden of Morning Calm, a 30,000㎡ garden, is open year-round and is a great spot to visit for families, couples, and photographers alike. The garden was conceptualized by Professor Han Sang-kyung (Gardening Department, Sahmyook University) while he was serving as an exchange professor in America. His vision was to create a garden that would become world-famous and spread the concept of Korean beauty throughout the world. The inspiration for the garden stemmed from a poem written by Sir Tagore, a great Indian poet, who described Korea during the Joseon Dynasty as "The Land of the Morning Calm."

The garden is the oldest private garden in Korea. It is an artistic space with a beautiful balance between the Korean concept of natural curves with asymmetry, and plants with synthetic materials, attracting about 600,000 visitors annually.

Scenic walkways, beautifully manicured grass, and flower beds connect the garden's 20 different themed sections. The Sunken Garden is shaped like the Korean Peninsula and is carpeted with beautiful flowers on both sides representing the desire for South and North Korea to be reunited. It is easily one of the most popular and meaningful attractions at the garden.

The garden houses about 5,000 kinds of plants, including 300 varieties native to Baekdusan Mountain, known as a spiritual mountain to the Korean people. Flowers are in bloom from March to November, so the garden is usually busy during this period. In addition to the beautiful foliage of the garden, there are a variety of festivals and displays held throughout the year.

Stop At: Dumulmeori, Yangsu-ri, Yangseo-myeon, Yangpyeong-gun, Gyeonggi-do 12585 South Korea
Dumulmeori literally means 'two water area,' and refers to the place where Bukhangang River and Namhangang River meet. The dock for an ancient-style ferry and weeping willows add to the rustic beauty of this area. Another attraction at this site is the three 400-year-old Zelkova trees that appear as one giant tree. A privately owned place, Dumulmeori remains as a popular site for shooting Korean TV dramas, movies, commercials, wedding pictures as well as nature pictures.
Duration: 1 hour

In addition to selling everything under the sun, large shopping malls such as Good Morning City and Freya add an extra dimension to the shopping experience with their own multiplex cinemas, while Doota features a huge outdoor concert hall hosting a range of events including outdoor fashion shows, concerts, modeling contests and classical Korean music for tourists.
Duration: 2 hours

Stop At: Gwangjang-dong, Gwangjang-dong, Seoul
Gwangjang Market is one of Korea's largest traditional markets and is renowned for its quality silk goods, linen bedding and hand-made goods. These days, the vintage clothing arcade in the market has become a very popular attraction among young people and wholesalers searching for unique vintage fashion.
Gwangjang Market has over 100 years of history. The origin of the market can be traced back to the establishment of the Gwangjang Corporation in 1905 which was created with the purpose of reclaiming Korean sovereignty during the period of Japanese occupation. At that time, traditional Korean markets were only temporary marketplaces that were periodically held every few days. Gwangjang Market was the first permanently established market that was open everyday. In 1962 the market was divided into Dongdaemun Market and Gwangjang Market and modern buildings were constructed.

The market continues to thrive today and is especially popular among young people for its vintage clothing arcade. The vintage arcade offers a variety of unusual, unique designs that attract many people including many famous Korean celebrities.

A visit to Gwangjang Market is a must for Korean couples planning their wedding and setting up their new home. Couples can purchase everything they need under one roof at good prices: home furnishings, bedding, yedan (wedding presents given by the bride to the groom's family), hanbok (traditional Korean attire), silk, etc.
Gwangjang Market is also famous for its abundance of street food.
Duration: 1 hour

Stop At: Hallyu K-Star Road, 407, Apgujeong-ro, Gangnam-gu, Seoul 06009 South Korea
If you would like to experience the Hallyu culture of K-POP and enjoy Gangnam Style shopping, visit the K-star Road. On the K-star Road led for 1 km from Apgujeong-dong Galleria Department Store to Cube Entertainment, art toys symbolizing Hallyu stars including Girls Generation, EXO and TVXQ, the GangnamDols are decorating the road. When you follow the beak and the footsteps of ‘K Bird’ installed on lampposts and crosswalks, you can find celebrities’ favorite restaurants and fashion stops, and gain information of celebrities through the information displayer next to the store. The middle and high schools of celebrities, the homes that they had actually lived in, their favorite snack stores and comic shops are located here and there in the K-star Road. Do not forget the trendy cafes of Gangnam, famous department stores, and shopping in the high-end shopping stores.

Apgujeong-dong and Cheongdam-dong with entertainment corporations SM, JYP and CUBE concentrated have been the must-see spots of Hallyu fans. For the fans to actually meet the stars, to follow the stories of stars, the Gangnam Hallyu K-star Road is becoming an interesting traveling spot by developing the special places with the stores of celebrities.
Duration: 30 minutes

Stop At: Starfield Library, 513, Yeongdong-daero, Gangnam-gu Starfield COEX Mall, Seoul 06164 South Korea
Located in the center of COEX Mall, Starfield Library is an open public space where anyone can freely come to sit down, take a break, and immerse themselves in books along with other bibliophiles.

A wide selection of books in various genres such as humanities, economics, hobbies, etc. are readily available. Whole sections of the library are dedicated to foreign books and famous authors. iPads can be used to read e-books. Close to 600 magazines, domestic and foreign, are available for browsing. All these qualities set Starfield Library apart from other ordinary libraries.

Stop At: SMTOWN coexartium, 513, Yeongdong-daero, Gangnam-gu, Seoul 06164 South Korea
If you are a K-pop fan, it is impossible not to know SM Entertainment’s culture complex space, SMTOWN at Coex Artium. The venue has become more popular after the opening of the SMTOWN Museum and SMTOWN External Media, an ultra-high resolution sign that was installed in May 2018.

SMTOWN Museum, located on the third floor, is the first venue where the stories related to the birth and growth of SM Entertainment’s artists are displayed. The museum includes various exhibitions, including SM ARCHIVE, SPECIAL EXHIBITION, and ARTIST GALLERY, all of which are related to music albums, stage photos, outfits and accessories, and behind the scenes stories.

In addition, the venue offers unique experiences and excitement, such as the SM content-creating tour, where imaginary meetings with SM artists utilizing augmented reality or virtual reality take place.

Meanwhile, SMTOWN External Media is the biggest display in Korea, with a size of four basketball courts. This is why it is also called the Times Square of Korea. K-pop music videos along with the real-time multi live broadcasting channel, “!tLive,” are aired on the screen.

The biggest hologram theater in Korea is on the fifth and sixth floors, which showcases mostly SM artists’ concert videos. Furthermore, sometimes guests can watch concerts that have not been released on DVD yet.

Stop At: Sinsa / Garosugil, Sinsa / Garosugil, Seoul
The ginkgo tree-lined street (Sinsa-dong Garosu-gil) that runs from Sinsa Station (Subway Line 3) to Hyeondae High School is a popular, upscale street in Seoul. The street (also known as ‘artists' street’) has an eccentric flair thanks to its variety of charmingly decorated coffee shops, and designer stores. Garosu-gil is particularly popular in autumn when the golden ginkgo leaves begin to fall.

Stop At: Hongdae, Hongdae, Seoul
Hongdae is a neighborhood known for its youthful and romantic ambience, underground culture, and freedom of self-expression. Unique cafes, cozy galleries, accessory stores, fashion shops, live cafés and clubs, art markets, and gourmet eateries make this a popular hang-out for local youth and a fascinating place to walk around. These unique places plus the cultural events, street performances, and festivals held here make Hongdae an area that is always packed with people and excitement. Special streets such as ateliers’ street (lined with private institutions for art students preparing for university entrance exams), Picasso’s Street, and Club Street are also must-go places if you’re hoping to fully experience the Hongdae area.
Duration: 1 hour

Stop At: N Seoul Tower, 105, Namsangongwon-gil, Yongsan-gu, Seoul 04340 South Korea
Namsan Seoul Tower was the first tower-type tourism spot in Korea. The top of the tower is at almost 480 meters above sea level, including Namsan Mountain (243m) and the tower’s own height (236.7m), making it one of the tallest towers in Asia. It is comprised of Seoul Tower Plaza, recently opened to public access after 40 years, and N Seoul Tower, operated by CJ Foodville since 2005. The tower was first established as a broadcasting tower to send out TV and radio signals in 1969. As of now, it has become one of the representative landmarks and multi-cultural venues in Seoul.
Duration: 1 hour

Hora de Inicio: 9:00 AM
Duración: 5 Days
Lugar de comienzo: Traveler pickup is offered
You will meet guide at exit gate of airport holding sign board with your name on it.