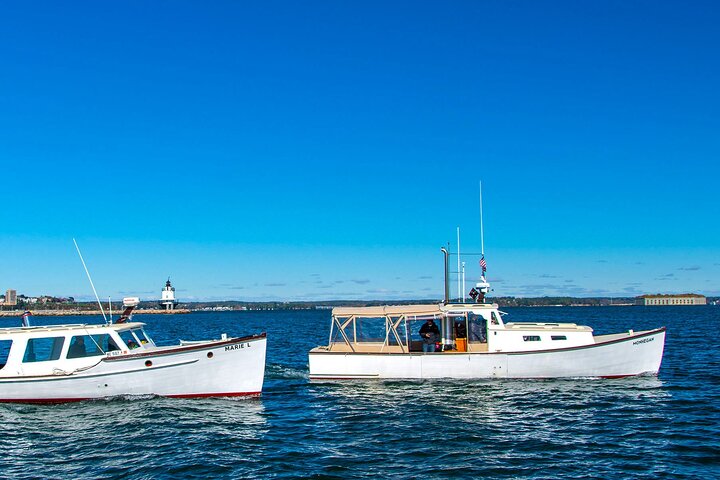 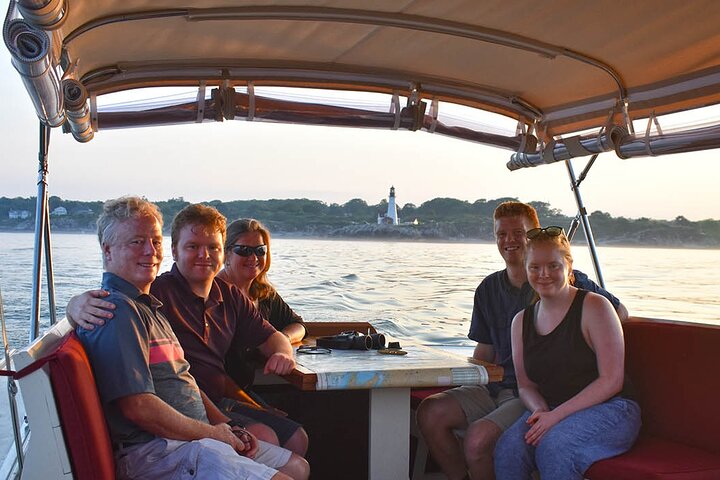 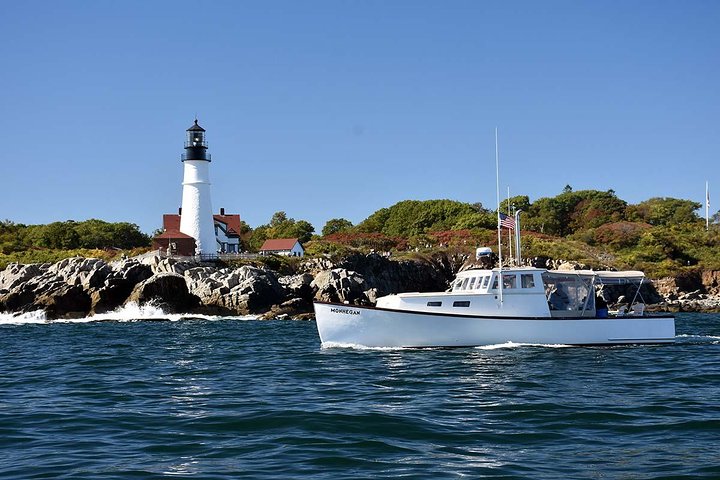 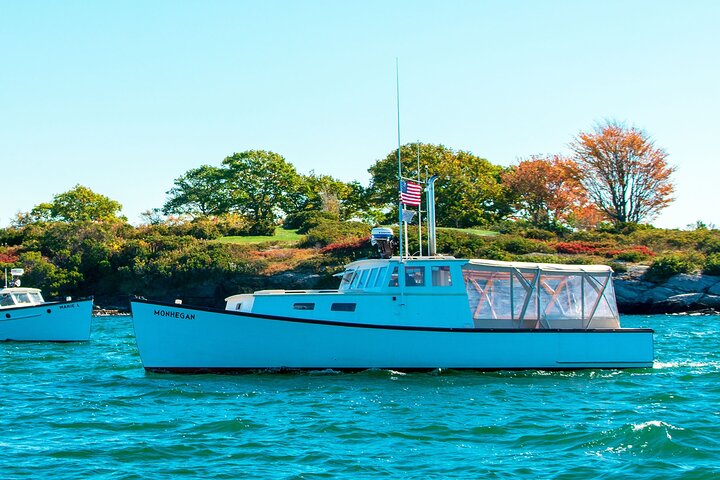 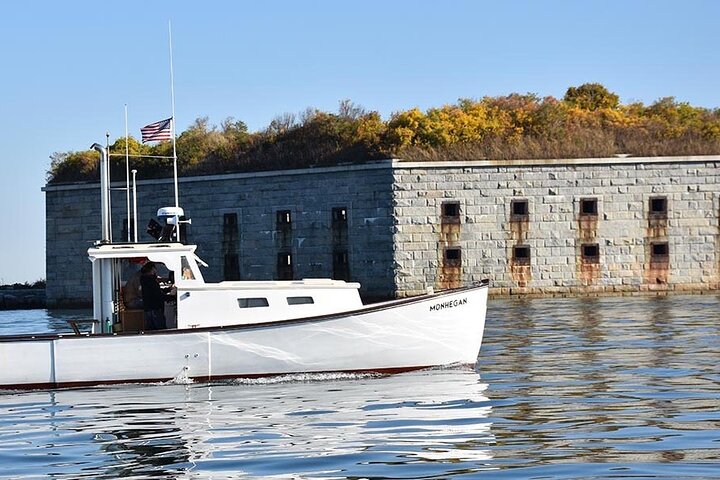 Experience COLORFUL Maine on this 2.5-hour sightseeing tour featuring Maine's fall color and the best coastal sights in the Portland area. It doesn't get any more "New England" than this! Book ONE TICKET for a group of up to 6.

MONHEGAN, our sturdy lobster boat, is fitted with a retractable enclosure over her aft deck to ensure your comfort even if the autumn weather is a bit chilly. All charters are private (only one group per sailing), for up to 6 passengers. Children and infants are welcome.

Customize your charter by adding onboard catering including lunches, charcuterie platters, and snacks. Beer and wine are available on board for purchase as well. Kindly contact us at least 48 hours in advance of your departure to order food.

Board M/V MONHEGAN, a beautifully restored wooden lobster boat, and make yourself at home as you cruise through Portland's Harbor, past wharves dating to the period just after the Revolutionary War. At one point, Portland was one of the busiest harbors in the early decades of the United States, a fact attested to by the incredible stone fortresses protecting the harbor.

This is the smallest and first of four lighthouses we will encounter on our cruise through Casco Bay. On windy days, keep an eye out for gatherings of expert kite flyers and their colorful kites. Sometimes there's even a giant purple octopus floating lazily in the breeze!

Just around the corner from Bug Light is a statue of the bow of a Liberty Ship. Many ships were constructed here during WWII, including the S.S. Jeremiah O'Brien, which is a popular tourist attraction in San Francisco and one of the only surviving Liberty Ships.

Get up close to Spring Point Light and nearby Fort Preble, a small gun emplacement built as a part of Portland's Harbor Defenses. In the early years, the lighthouse was not connected to the mainland by the granite breakwater that exists today, and ships that went on the wrong side of the lighthouse went aground on shallow ledge.

See the incredible New England Fall color on the shores of Cape Elizabeth, home to some of the most amazing seaside homes in Casco Bay.

See Portland Head Light, Maine's oldest and most iconic lighthouse, from the water. Commissioned by George Washington and constructed starting in 1791, this lighthouse has been an important navigational beacon and local landmark for more than 2 centuries.

The lighthouse has withstood hurricanes and global conflicts. German U-boats sunk a US Navy ship just 15 miles off the Head Light in the waning days of WWII.

Marking the opposite side of the harbor channel from Portland Head Light, Ram Island Light sits atop a rocky ledge and at high tide appears to be floating and completely unattached to land. Whereas Portland Head Light has its stately keeper's house and beautiful white washed sides, Ram Island Light is weathered and gray almost inaccessible, with a now-derelict pier leading to a ladder that requires one to climb up 30 feet on the outside of the lighthouse before you get to the door.

Enjoy fantastic views of the scenic cliffs on Cushing Island and the tree-lined streets and quaint cottages of Peaks Island.

Once home to several amusement parks that were served by direct steamer routes from New York, Peaks is now a quiet island neighborhood that is technically part of the City of Portland but has a small-town feel all its own.

By the time the fall colors are in full view, most seasonal residents have returned to their usual homes, and Peaks is home to just a couple hundred hearty year round souls who must take a ferry or water taxi to get to the mainland.

With its original construction dating to 1808, Fort Scammel is the only of the historic Forts in the Portland area to have actively participated in battle, when it fired shots in British warships in the War of 1812.

Located on House Island, the fort is incredibly well preserved and features east and west bastions that are accessible by underground tunnels. Tours of the fort are available on select charters that we provide. Contact us for more information.

Pass By: Fort Gorges, Portland, ME

As the most conspicuous stone fortress protecting Portland Harbor, Fort Gorges is a landmark visible from much of Casco Bay, which is exactly why it was built on this rocky outcropping a short distance from Peaks and Little Diamond Islands and the mainland itself. The fort could fire more than a dozen cannons on attackers coming from any possible sea route, but was never used in active battle. Technological advancements in artillery during the Civil War rendered it too vulnerable to be useful. The fort did serve as a storage facility for the army during World War II, when underwater mines, electromagnetic sensing cables, and other systems were used to help protect Portland and Casco Bay from German attack.

Remember, Portland was home to a large shipyard during WWII and was the start of a pipeline that supplies oil to Montreal and eastern Canada, so the region was of high strategic importance even in more modern conflicts.

Informacion Adicional
"Confirmation will be received at time of booking"
"Not wheelchair accessible"
"Infants and children are welcome. Children under age 10 must wear a life jacket (provided)."
"Stroller accessible"
"Service animals allowed"
"Most travelers can participate"
"This experience requires good weather. If it’s canceled due to poor weather, you’ll be offered a different date or a full refund"
"This is a private tour/activity. Only your group will participate"
"Face masks required for travelers in public areas"
"Face masks required for guides in public areas"
"Hand sanitizer available to travelers and staff"
"Regularly sanitized high-traffic areas"
"Gear/equipment sanitized between use"
"Transportation vehicles regularly sanitized"
"Guides required to regularly wash hands"
"Contactless payments for gratuities and add-ons"
"Face masks required by guests/staff when boarding and disembarking vessels and at other times when staff and guests are in close proximity to each other. While vessels are under way, guests are not required to wear face masks should they choose to remove them."