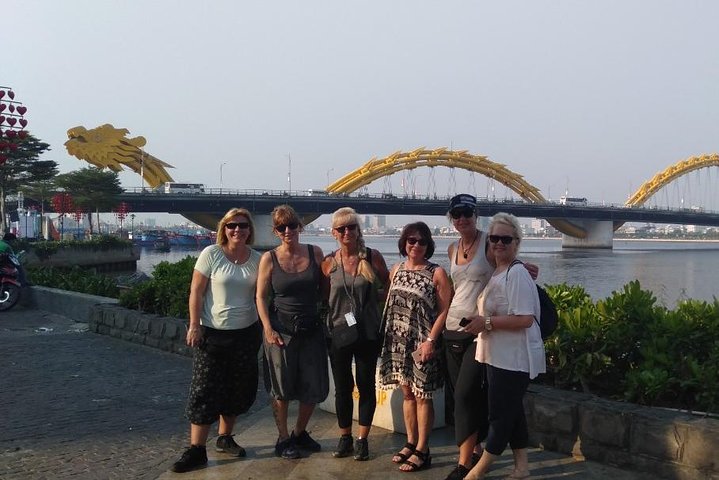 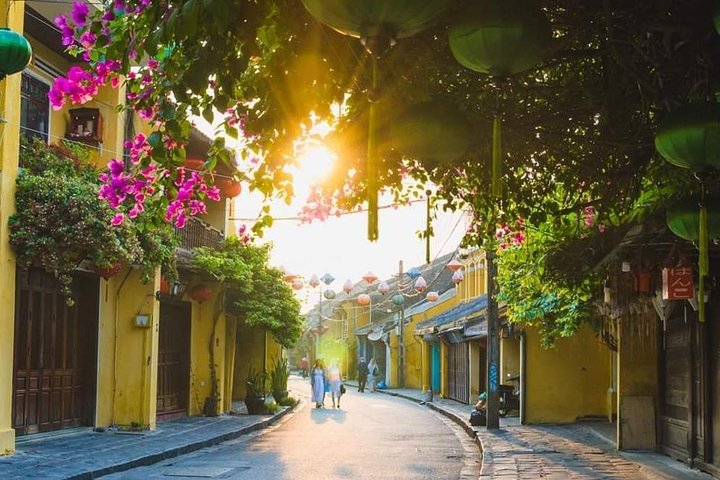 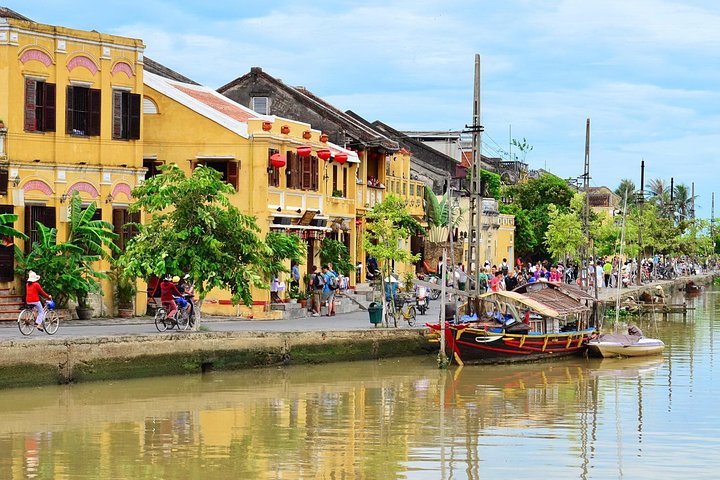 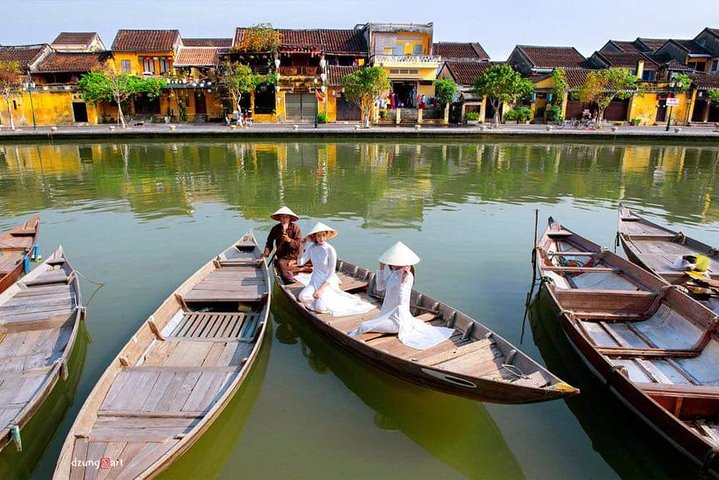 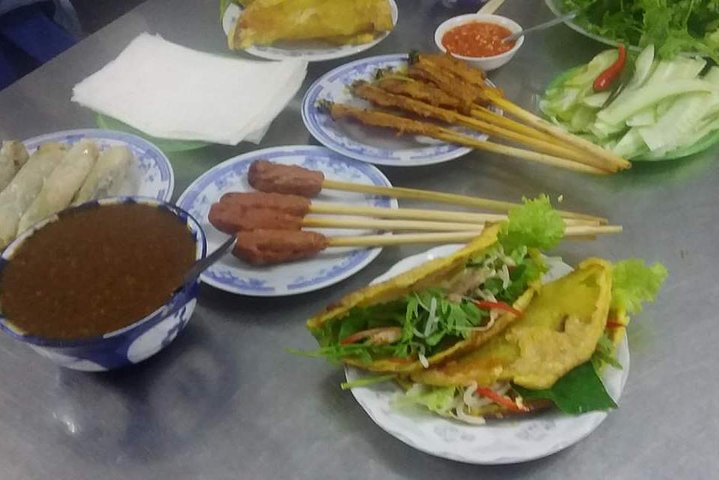 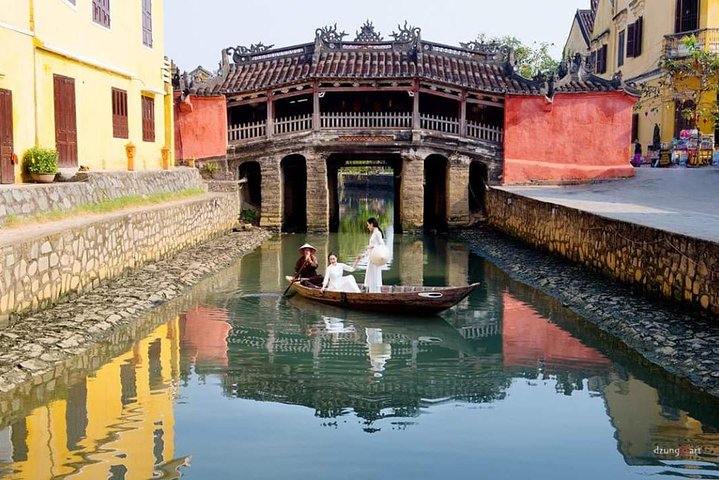 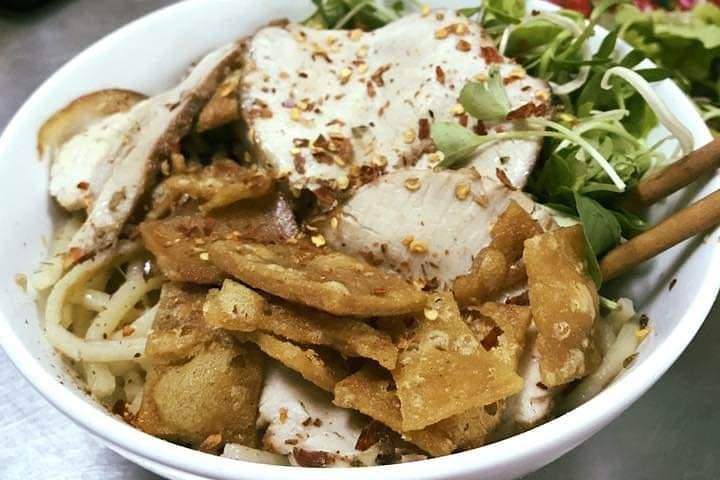 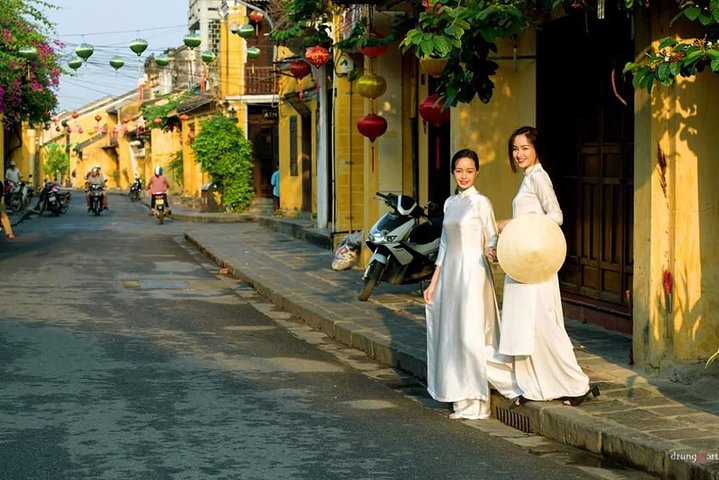 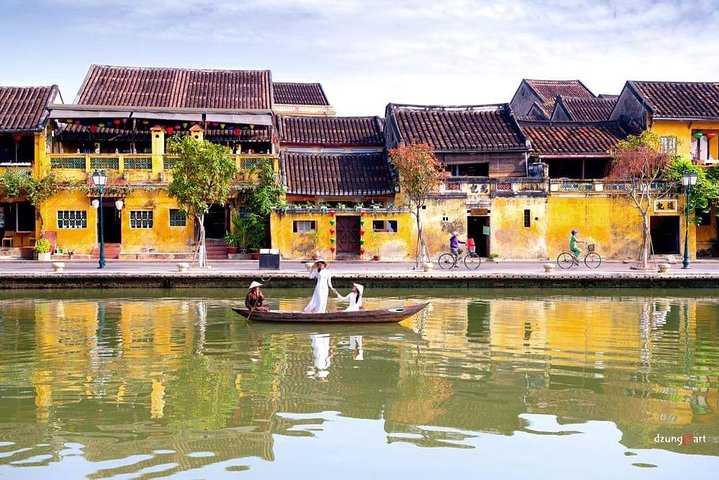 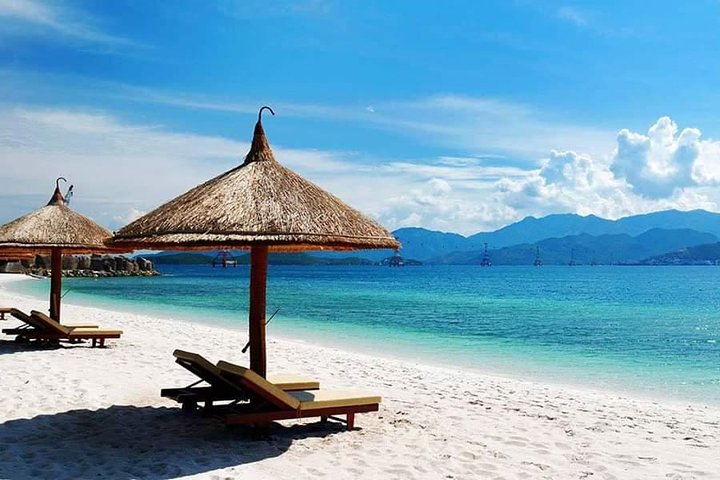 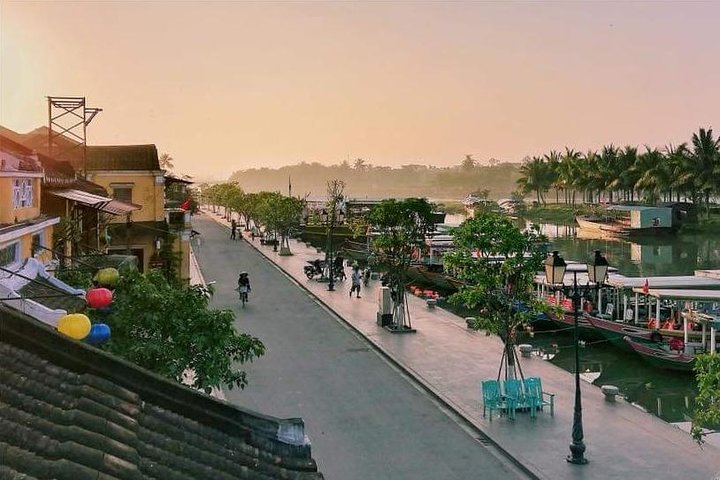 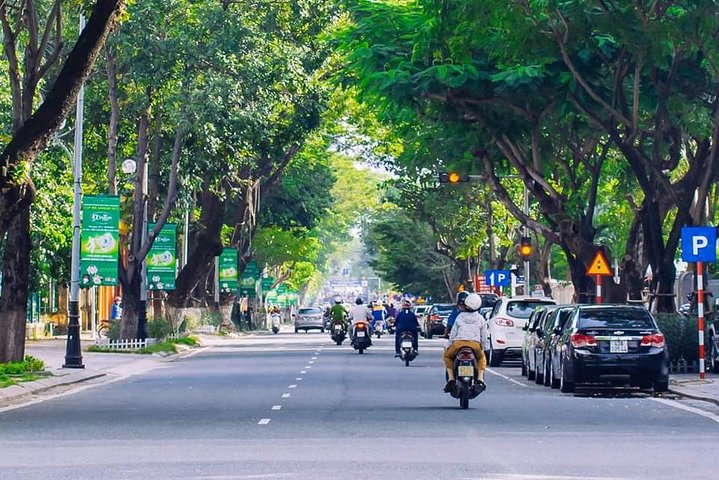 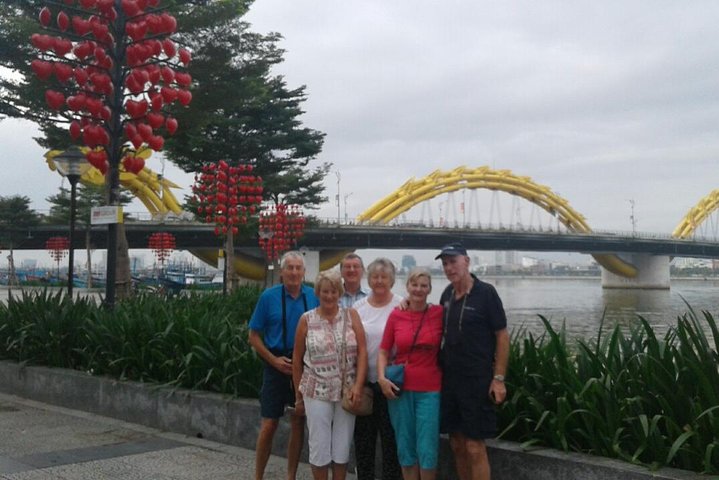 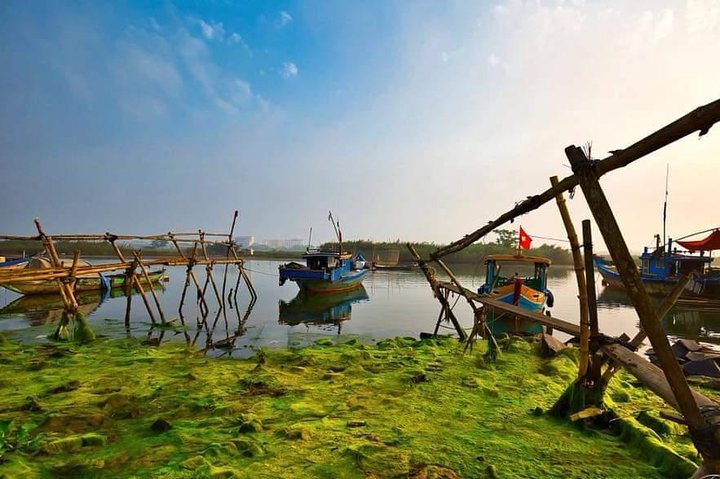 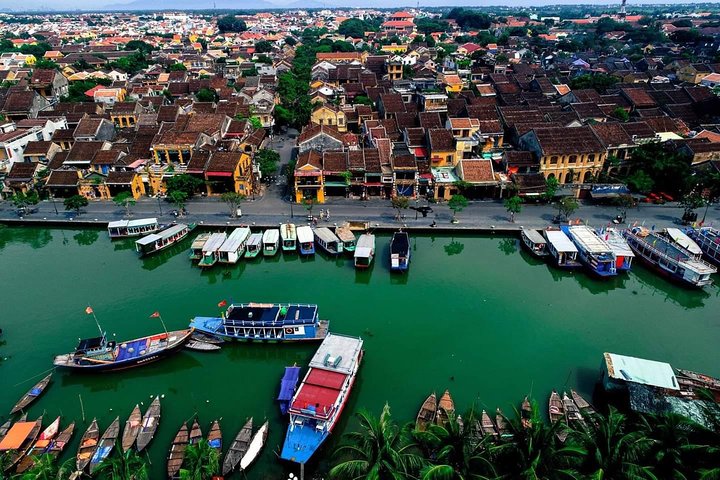 Third largest city in Vietnam and main entry point of the central region, Danang has been developing incredibly fast in the past few years, becoming a thrilling mix of modernity and traditions. This tour reveals the fascinating history and spectacular beauty of this town. From the ancient Han Market to the Linh Ung Pagoda, from the Cham Museum to Marble Mountain offering breathtaking views, discover the wonders of this exciting city.

Take a step back in time on a walking tour in Hoi An Ancient Town – a UNESCO World heritage site. A private guide will lead you through the well-kept historic district of this once – prosperous seaport city.

The Dragon Bridge with the shape of the dragon crossesis a bridge with a dragon over the Han River at Danang, Vietnam. Dragon Bridge is 666m long, 37.5m wide and has six lanes for traffic.It opened to traffic on March 29, 2013, at a cost of nearlyVND 1.5 trillion dong (US$88m). The bridge was designed by the US-based Ammann & Whitney Consulting Engineers with Louis Berger Group. Construction was undertaken by Company No. 508, an affiliate of Civil Construction Engineering Corporation No.5, and Bridge Company No. 75.

Main span was completed on October 26, 2011. The bridge was opened to traffic on March 29, 2013, the 38th anniversary of the liberation of DanangCity. This modern bridge crosses the Han River at the Le Dinh Duong/Bach Dang traffic circle, providing the shortest road link from the Danang International Airport to other main roads in DanangCity, and a more direct route to My Khe Beach and Non Nuoc Beach on the eastern edge of the City. The bridge was designed and built in the shape of a dragon and to breathe fire and water.

Considered to be Vietnam's most picturesque beach, the white sandy 20-mile stretch of My Khe Beach was named by the American troops who visited during the Vietnam War for R&R. It offers excellent surfing from September just off the shores of Danang. There are also a number of high-end resorts within the vicinity should you be in need of pampering with most offering a rich choice of treatments at their spas and a range of dining options.

The Marble Mountains are a cluster of five hills made from limestone and marble in Da Nang. It's also a well-known pilgrimage site with peaks, caves, tunnels and temples all just waiting to be discovered. Named after the elements metal, wood, water, fire and earth, Marble Mountains exist in a coastal area that is renowned for stone-cutting and sculpture about 9km south of Da Nang. The caves within the mountains hold many secrets including bullet holes from when troops used to spy on the US soldiers relaxing on My Khe Beach below and buildings standing within the caves and grottoes. There are also Buddhist sanctuaries and places of worship dotted across the mountains which are a much-visited spiritual site. You can even see a special circular cave here. It leads to the summit, where you can enjoy spectacular panoramic views.

Hoi An Town is an exceptionally well-preserved example of a Southeast Asian trading port dating from the 15th to the 19th century. Its buildings and its street plan reflect the influences, both indigenous and foreign, that have combined to produce this unique heritage site. Hoi An has no airport, and no train station either. The only way to get there is by road. You can hire a taxi from the neighbouring city of Da Nang, which does have an airport with daily flights from Hanoi, Ho Chi Minh City and other large Vietnamese cities. There’s also a train station in Da Nang, and bus services are plentiful. We have a wide selection of hotels for you to choose from in both Cua Dai Beach and Hoi An City, whatever suits your pocket and style.

Informacion Adicional
"Confirmation will be received at time of booking"
"Not wheelchair accessible"
"At time of booking, Cruise ship passengers must provide the following information at time of booking: ship name, docking time, disembarkation time and re-boarding time"
"Dress code is smart casual"
"Most travelers can participate"
"This is a private tour/activity. Only your group will participate"