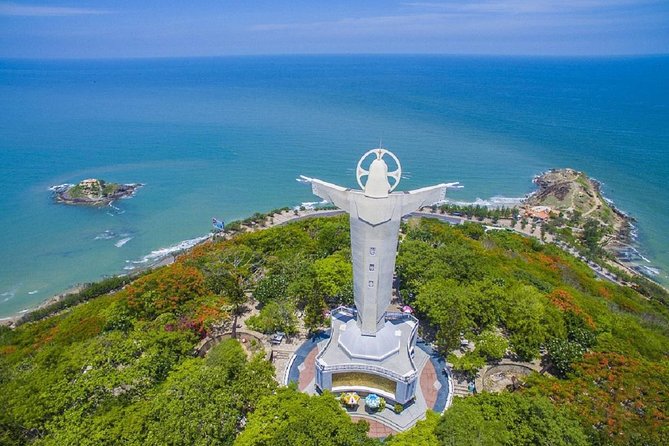 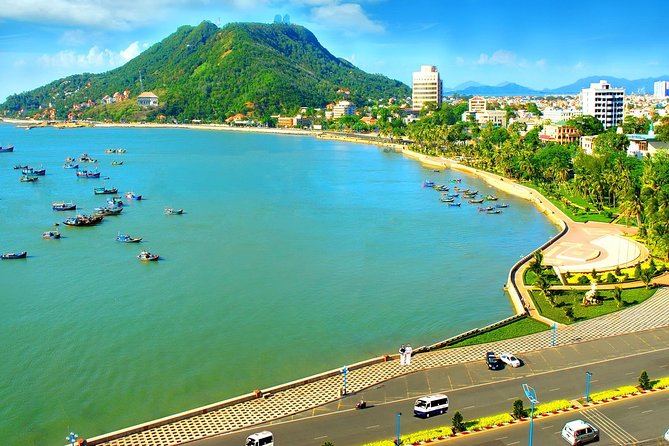 Enjoy a sightseeing tour of the coastal city of Vung Tau and explore Vietnamese country life and culture. See the Nirvana Meditation Retreat and important local pagodas. Stop at the giant Jesus statue, taste local cuisine, and visit a nearby village.

Vung Tau has four known beaches—Front Beach, Back Beach, Pineapple Beach, and Paradise Beach. Front Beach (Bãi Trước) is the most popular, which for many others is enough reason to stay away. In addition to the crowds, the water is rather polluted and doesn’t offer the best beach setup. However, you can still enjoy some fresh seafood at the many stalls and restaurants that have set up shop—they serve some of the most delicious seafood in the south of Vietnam.
For a better beach experience, head to any of the other three. Back Beach (Bãi Sau) is much less dirty, and perfect for surfing. As the beach gets some wonderful wind swells, kitesurfing shops have appeared over the years, offering rentals and classes for all levels.

Bach Dinh, or the White Palace of Vung Tau City is located at 4 Tran Phu Street, on the slop of Big Mountain. Standing 50 meter above the sea level, White Palace has its French name which is La Villa Blanche. Tracing back to the year of 1898, it was considered as a summer holiday villa of French Governor General Paul Doumer. This palace was named after his lovely daughter. Unfortunately, while the structure was being built, Doumer had to come back to France and became the President of France later. It was not until 1916 that it was officially used for holiday resting of some Indochina-French Governors. Once visiting the White Palace, you will be attracted by its all white appearance, which is the reason why people here call it “Bach Dinh” (“Bach” means white color in Vietnamese).

Thich Ca Phat Dai (Platform of Shakyamuni Buddha) is a notable Theravada Buddhist temple in the coastal city of Vung Tau in southern Vietnam. It lies to the northwest of the Lớn mountain and was built between 1961 and 1963 when it was opened.
It is set on a plot of around five hectares, with a Zen Buddhist monastery at the foot of the plot and the Thích Ca Phật Đài at the top. The Zen monastery is a small brick temple built by a government official from Vung Tau in 1957. In 1961, the Buddhist association organised for a renovation of the monastery and decided to build the Thich Ca Phat Dai further up the mountain. Additional lodgings were built to cater to Buddhist pilgrims who come and visit the site.