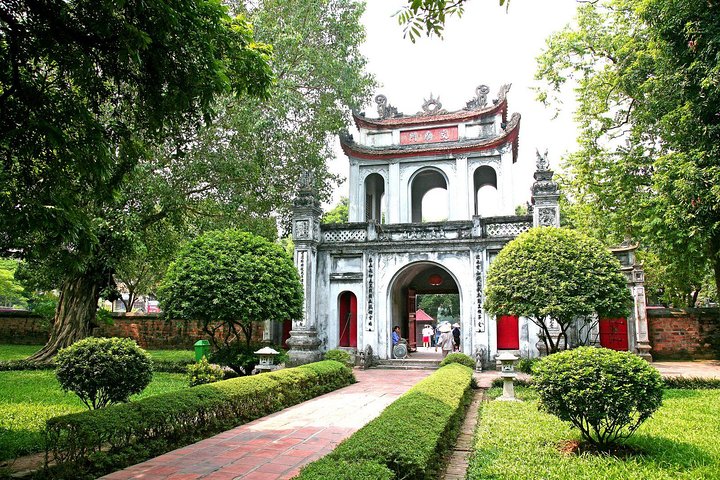 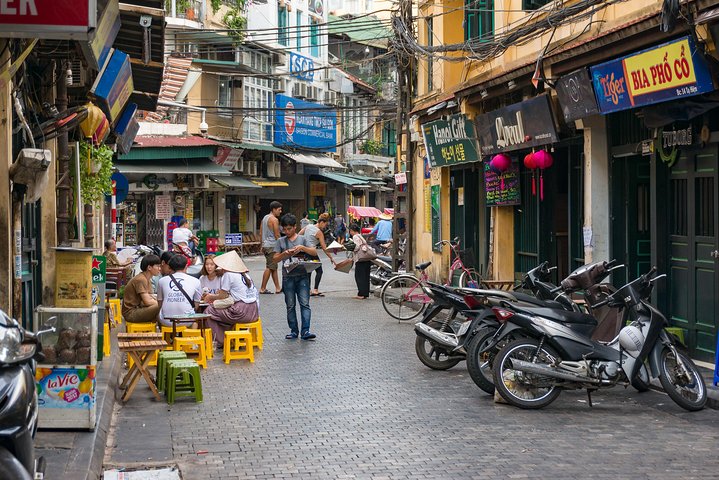 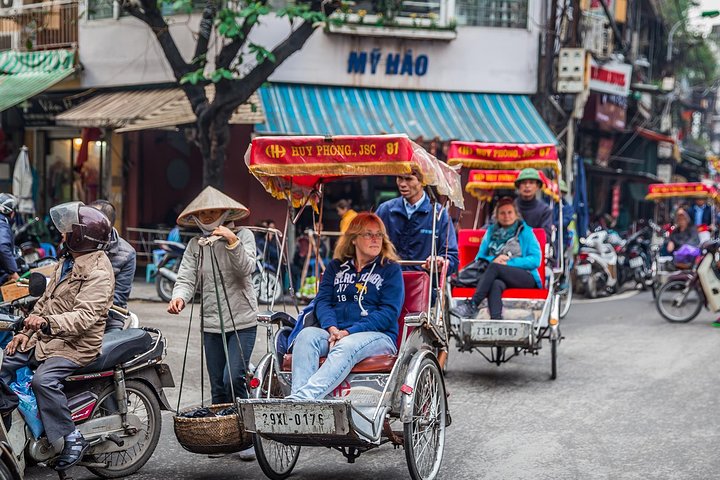 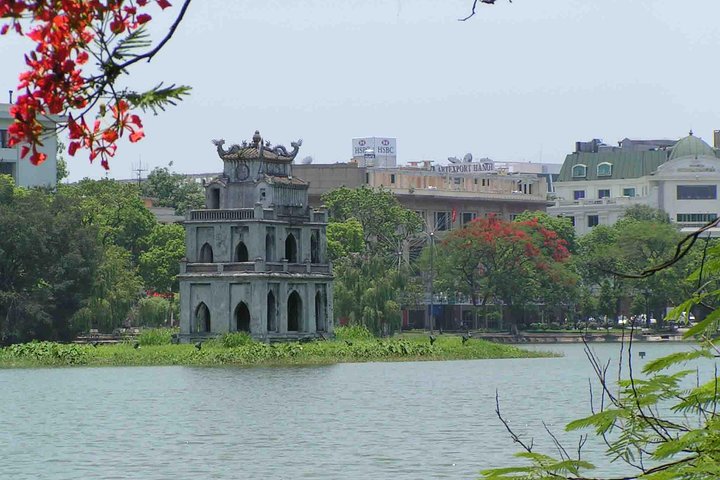 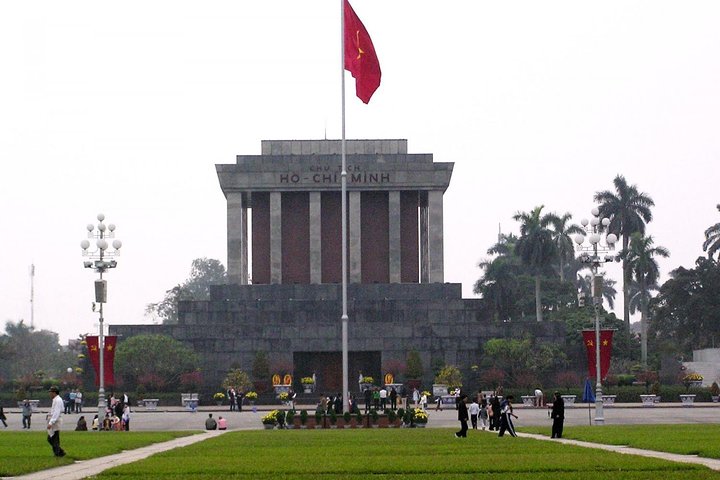 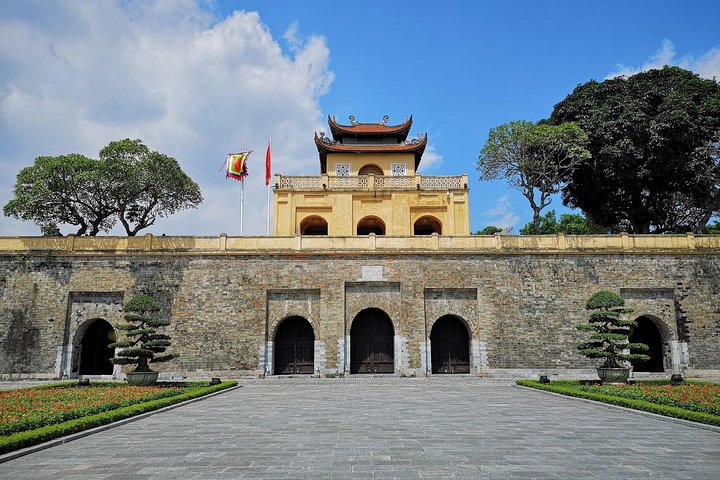 Hanoi Capital is located on the banks of the Red River with tranquil Hoan Kiem Lake at its heart, Hanoi is the capital of the Socialist Republic of Vietnam. North of the lake are the bustling streets of the Old Quarter, each street named after the trade that used to take place there. Sightseeing with a Local Guide; water puppets performance; visit Ho Chi Minh’s mausoleum, One Pillar Pagoda, Ho Chi Minh Museum, Presidential Palace, and Temple of Literature.

The President Ho Chi Minh Mausoleum is a mausoleum which serves as the resting place of Vietnamese Revolutionary leader Ho Chi Minh in Hanoi, Vietnam. It is a large building located in the center of Ba Dinh Square, where Ho, Chairman of the Workers' Party of Vietnam from 1951 until his death in 1969, read the Declaration of Independence on 2 September 1945, establishing the Democratic Republic of Vietnam. It is also known as Ba Đình Mausoleum and is open to the public.

The One Pillar Pagoda is a historic Buddhist temple in Hanoi, the capital of Vietnam. It is regarded alongside the Perfume Temple, as one of Vietnam's two most iconic temples.

The Tran Quoc Pagoda in Hanoi is the oldest pagoda in the city, originally constructed in the sixth century during the reign of Emperor Ly Nam De (from 544 until 548), thus giving it an age of more than 1,450 years. When founded the temple was named Khai Quoc (National Founding) and was sited on the shores of the Red River, outside of the Yen Phu Dyke. When confronted with the river's encroachment, the temple was relocated in 1615 to Kim Ngu (Golden Fish) islet of Ho Tay (West Lake) where it is now situated. A small causeway links it to the mainland.

The royal enclosure was first built during the Ly dynasty (1010) and subsequently expanded by the Tran, Le and finally the Nguyen dynasty. It remained the seat of the Vietnamese court until 1810, when the Nguyen dynasty chose to move the capital to Hue. The ruins roughly coincide with the Hanoi Citadel today.

The royal palaces and most of the structures in Thăng Long were in varying states of disrepair by the late 19th century with the upheaval of the French conquest of Hanoi. By the 20th century many of the remaining structures were torn down. Only in the 21st century are the ruin foundations of Thang Long Imperial City systematically excavated.

In mid-1945 the Citadel was used by the Imperial Japanese Army to imprison over 4000 French colonial soldiers captured during the Japanese coup d'état in French Indochina in March 1945.

Hoa Lo Prison was a prison used by the French colonists in French Indochina for political prisoners, and later by North Vietnam for U.S. prisoners of war during the Vietnam War. During this later period it was known to American POWs as the Hanoi Hilton. The prison was demolished during the 1990s, although the gatehouse remains as a museum.

The Old Quarter is the name commonly given to the historical civic urban core of Hanoi, located outside the Imperial Citadel of Thang Long. This quarter used to be the residential, manufacturing and commercial center, where each street was specialized in one specific type of manufacturing or commerce.

Another common name referring to approximately the same area is the 36 streets, after the 36 streets or guilds that used to make up the urban area of the city.

Hoan Kiem Lake, meaning "Lake of the Returned Sword" or "Lake of the Restored Sword"), also known as Hồ Gươm (Sword Lake), is a fresh water lake, measuring some 12 ha in the historical center of Hanoi, the capital city of Vietnam. In the past, the lake was variously name "Luc Thuy Lake", meaning "Green Water Lake" - aptly named for the water's color) or "Thuy Quan Lake", meaning "Mariner's Lake". The lake is one of the major scenic spots in the city and serves as a focal point for its public life.

The Temple of Literature is a Temple of Confucius in Hanoi, northern Vietnam. The temple hosts the Imperial Academy, Vietnam's first national university. The temple was built in 1070 at the time of Emperor Ly Thanh Tong. It is one of several temples in Vietnam which is dedicated to Confucius, sages and scholars. The temple is located to the south of the Imperial Citadel of Thang Long. The various pavilions, halls, statues and stelae of doctors are places where offering ceremonies, study sessions and the strict exams of the Dai Viet took place. The temple is featured on the back of the 100,000 Vietnamese Dong banknote. Just before the Vietnamese New Year celebration Tet, calligraphists will assemble outside the temple and write wishes in Han characters. The art works are given away as gifts or are used as home decorations for special occasions.

Informacion Adicional
"Confirmation will be received at time of booking"
"Wheelchair accessible"
"At time of booking, Cruise ship passengers must provide the following information at time of booking: ship name, docking time, disembarkation time and re-boarding time"
"Dress code is smart casual"
"Most travelers can participate"
"This is a private tour/activity. Only your group will participate"