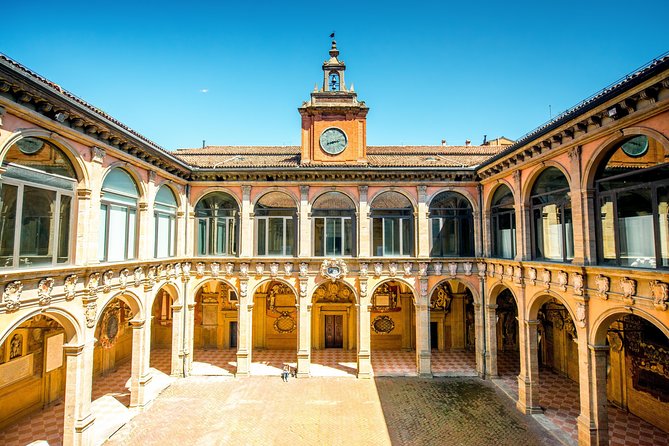 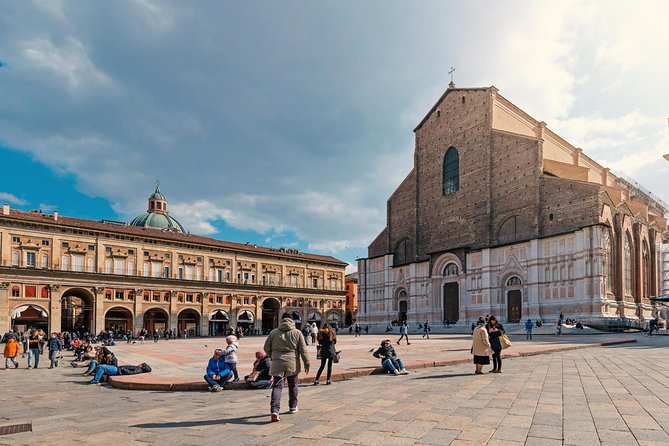 Enjoy the historical and cultural heritage of Bologna in a walking tour of 2 hours!

Visit its Medieval squares and the main landmarks of the city, from Piazza Maggiore and its impressive unfinished cathedral, the Basilica San Petronio, to the 2 Towers, main symbol of the city. You'll also learn the history of Bologna's University, the oldest one in Europe.

The tour starts from our travel agency, not far from Bologna's train station.

Stop At: Due Torri, 40125 Bologna, Metropolitan City of Bologna, Italy

Our guide will take you to the Two Towers, one of Bologna's most celebrated highlights.

Piazza Maggiore is the heart of the city. The tour guide will show you around and explain the history of the Medieval buildings overlooking the square, including the Basilica San Petronio

During the tour, you'll also learn about the most ancient University in the world, the Archiginnasio

Looking through this little window in Via Piella you'll find out about the canals that still flow below the city.

Informacion Adicional
"Confirmation will be received within 48 hours of booking, subject to availability"
"Wheelchair accessible"
"A minimum of 2 participants is required for the tour to be confirmed."
"Stroller accessible"
"Service animals allowed"
"Near public transportation"
"Transportation is wheelchair accessible"
"Once confirmed solo travellers can join any time slot. If the tour is not confirmed you'll be offered a different time slot or refunded."
"• Availability for shows cannot be checked without making a booking. Credit cards will only be charged upon confirmation of show availability"
"• In case of bad weather the Bike Tour is guaranteed"
"Children must be accompanied by an adult"
"Most travelers can participate"
"If the professional SPANISH tour guide is not availbale the tour will be in English or with a certified tour leader translator."
"This tour/activity will have a maximum of 15 travelers"