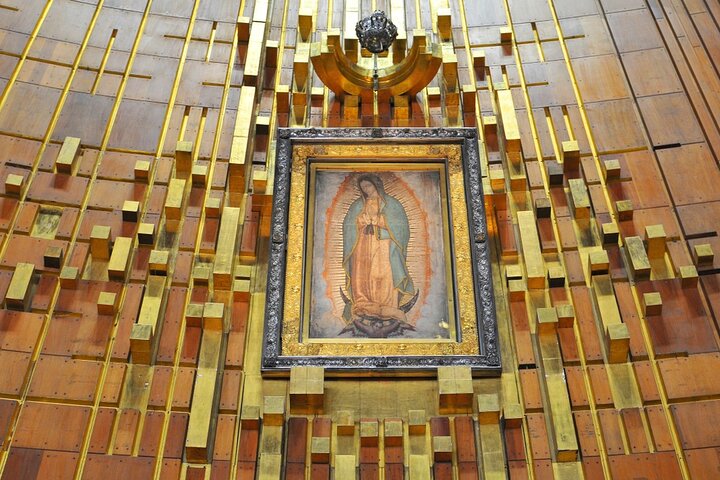 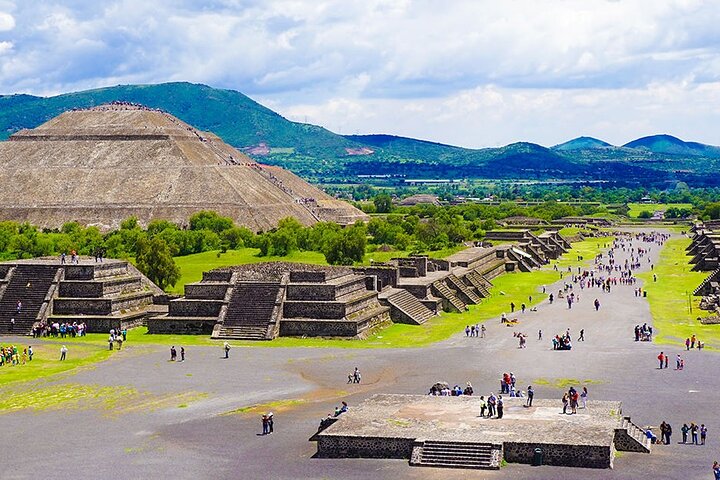 Pyramids of Teotihuacán and Basilica of Guadalupe

You will get a great experience in a very interesting and millenary city in the north side of this ancient site. An awesome place only 50 minutes away from Mexico City. Teotihuacan it’s the most visited archaeological site of South America and listed as a UNESCO World Heritage site since 1987.

The area is an enormous archaeological city in the Basin of Mexico just 30 miles northeast of Mexico City, containing some of the largest pyramidal structures built in the pre-Columbian Americas. Apart from the pyramidal structures, Teotihuacan is also known for its large residential complexes such as  the Avenue of the Dead and numerous colorful- well-preserved murals. Additionally, Teotihuacan produced a thin orange pottery style that is spread throughout  Mesoamerica as well the magnificent mortuary mask made in obsidian.

We´ll continue our tour with another visit that is just as magical, travelling to the pre-Columbian city of Teotihuacan, which was one of the largest urban sprawls of the ancient world. You will enjoy the pyramid of the Sun and The Moon, as well as a walk through the Avenue of the Dead. The recognition of this site as one of the most important cultural places is quite universal, since 1987 it is one of the listed World Heritage Sites by UNESCO.

Have yourself one of the most beautiful experiences by visiting one of the most holy of shrines that is the most visited in the world. The Basilica of Our Lady of Guadalupe, with 17 to 20 million visitors a year, having more visitors that St. Peter´s Basilica in the Vatican. As well as the historical buildings, the great circular basilica is awesome as well as grandiose. The construction itself is an amazing feat, since it was built on the muddy shores of the lake of Texcoco. Walking around Tepeyac Hill, where Mary the mother of Jesus left her image imprinted on St. Juan Diego´s ayate is an experience that should not be missed.

Informacion Adicional
"Confirmation will be received at time of booking"
"Wheelchair accessible"
"May be operated by a multi-lingual guide"
"Stroller accessible"
"Near public transportation"
"Infants must sit on laps"
"Not recommended for travelers with back problems"
"Not recommended for pregnant travelers"
"No heart problems or other serious medical conditions"
"Travelers should have a moderate physical fitness level"
"This is a private tour/activity. Only your group will participate"