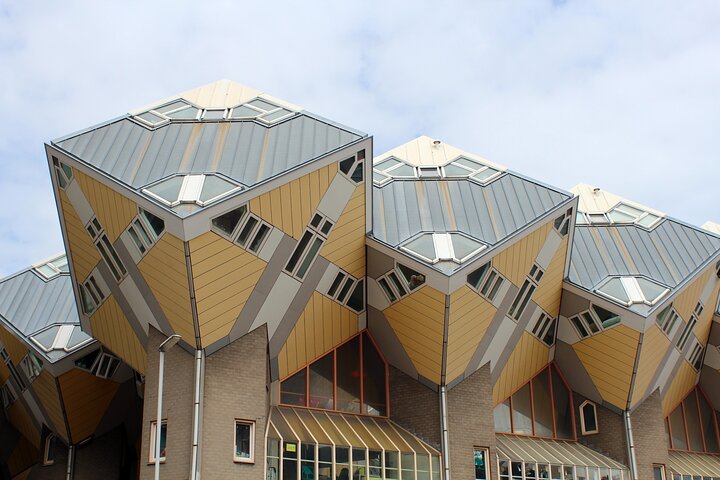 The Rotterdam Tourist Scavenger Hunt takes you on a self-guided walking tour, with challenges through the heart of the city. See all the sights while having fun and learning some history! You will walk from City Hall to the Cube Houses while taking a few side trips and taking on various challenges.

History of the city and architecture of City Hall with your first challenge.
Built between 1914 and 1920 in the Beaux Art style, with Byzantine, Roman and Art Deco influences. It survived WWII. City Hall is a national monument since 1997.

The World Trade Center Rotterdam is a modern high-rise building with a façade of greenish-blue glass.
Beurs-World Trade Center is located on the Coolsingel and Beursplein in the center of Rotterdam. It is a major business center in Rotterdam with approximately 200 offices. The building is 93 meters high.

Gijsbert was a liberal conservative Dutch statesman. He belonged to the Orangist party in the Netherlands. Throughout a tumultuous political period when Holland became a province of the French Empire of Napoleon I, Gijsbert’s ideals remained true.

Stop At: Grote of Sint-Laurenskerk, Grotekerkplein 27, 3011 GC Rotterdam The Netherlands

The Great, or St. Lawrence Church, is all that’s left of Rotterdam’s medieval buildings as most of them were destroyed during WWII.

Desidario Erasmo, or Erasmus as he is known in English, is Rotterdam’s most famous son. Why-
Erasmus (1466-1536), also known as Erasmus of Rotterdam, was a Dutch Renaissance humanist, Catholic priest, social critic, teacher and theologian. He was a classical scholar who wrote in pure Latin. Erasmus lived in a time of religious Reformation, for bother Catholics and Protestants.
See his statue

Time to try a local specialty, crepes. Learn about local foods and complete a challenge here.

Walk into the central market to admire the beautiful ceilings. They are covered with flowers, fruits and vegetables of all kinds. This residential and office building houses a market hall beneath its arch. It was built in 2014 under Queen Maxima of the Netherlands.

The Rotterdam Library consists of the Central Library and various archives. In contains a theatre and hosts a few exhibitions and cultural activities throughout the year. Shared workspaces are available here as well.

The Witte Huis a few blocks from here is another architectural gem. It was once Europe’s tallest building at 10 stories high. It was built in 1898.

This museum explores the history of the Dutch Marine Corps. The original museum established in 1938 but was completely destroyed during WWII. It reopened in 1995. It is open daily, except Monday’s, from 10/11h to 17h. Entry varies from 2 to 6 Euros.

The Maritime Museum was established in 1874 by Prince Henry of the Netherlands and provides a look into the city’s connection to the sea and its many waterways. Among other exhibits, it houses the reconstruction of a 2,000-year-old vessel.

Stop At: Lijnbaan, 3012 Rotterdam The Netherlands

Lijnbaan is the main shopping street of Rotterdam. Behind the Maritime Museum are 2 major roads. Schiedamsedijk leads to the Erasmusbreg, and Blaak leads to the Central Market and Cube Houses we saw earlier.

Here you will find to your left Theater Rotterdam Schouwburg. Behind that and to the right is the Snoei / C Art Gallery. On your right is a movie theater called Pathé Schouwburgplein.

The Centraal Station is the main railway station of the city of Rotterdam. It receives an average 110,000 passengers daily. This new structure was opened in 2014. Before the war, Rotterdam had 4 rail stations around the city center. Following their destruction, a new station was opened in March 1957. In 1968 Princess Beatrix opened the first metro line at Centraal station. It was taken apart in 2007 to make way for the the new one.

You have found Mari Andriessen (1897-1979)’s Memorial to the Fall of 1940-1945. It is composed of four bronze figures and was erected in 1957. This monument arose in response to a competition, issued by the Committee for the Establishment of Memorial Rotterdam, which was established on May 16, 1945, immediately after the war’s end.