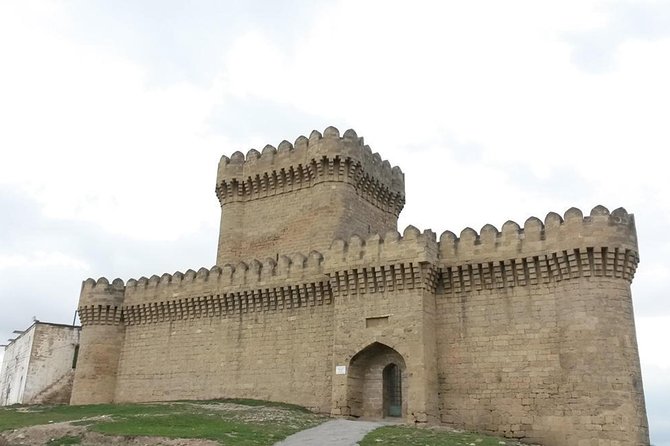 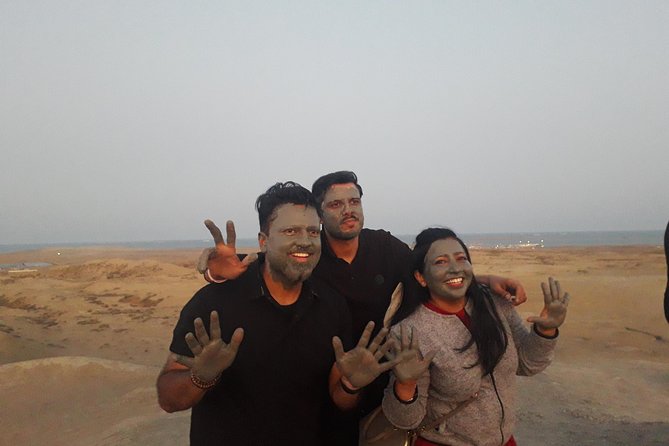 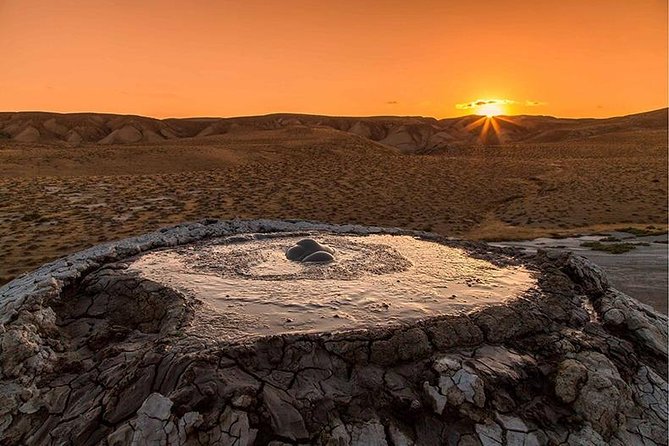 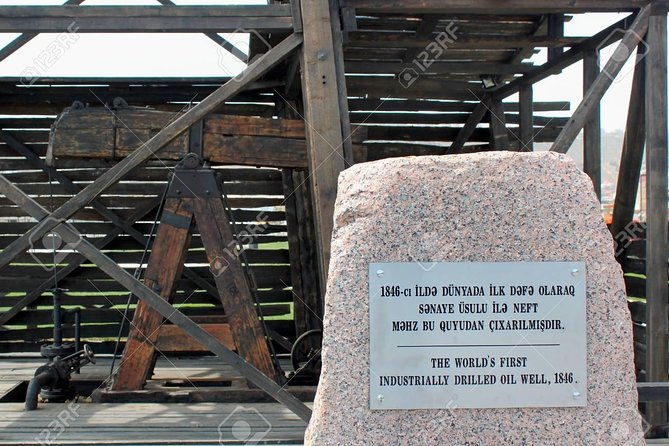 Gobustan Rock Art Cultural Landscape covers three areas of a plateau of rocky boulders rising out of the semi-desert of central Azerbaijan, with an outstanding collection of more than 6,000 rock engravings bearing testimony to 40,000 years of rock art. The site also features the remains of inhabited caves, settlements and burials, all reflecting an intensive human use by the inhabitants of the area during the wet period that followed the last Ice Age, from the Upper Paleolithic to the Middle Ages. The site, which covers an area of 537 ha, is part of the larger protected Gobustan Reservation.

Azerbaijan has the most mud volcanoes of any country, spread broadly across the country. 350 of the 800 volcanoes of the world are in the Azerbaijani Republic. Local people call them “yanardagh” (burning mountain), “pilpila” (terrace), “gaynacha” (boiling water) and “bozdag” (grey mountain) alongside its geographical name – mud volcanoes.

Note: Since the road to the "Mud Volcanoes" is bumpy you will be transferred to local taxis( price of taxis are included)

During its early Oil Boom, between 1885 and 1920, Azerbaijan benefited greatly from the expertise of well-known chemists and geologists from Europe and Russia. Baku's rich oil barons sought out the best advice that the scientific world had to offer, seeking recommendations from important figures like German chemist Carl Engler and Russian chemist Dmitry Mendeleyev. As a result, innovative new techniques such as rotary drilling and gas-lift were tested for the first time in Azerbaijan.

Yanar Dag (Azerbaijani: Yanar Dağ, meaning "burning mountain") is a natural gas fire which blazes continuously on a hillside on the Absheron Peninsula on the Caspian Sea near Baku, the capital of Azerbaijan (a country which itself is known as "the Land of Fire"). Flames jet into the air 3 metres (9.8 ft) from a thin, porous sandstone layer. Administratively, Yanar Dag belongs to Absheron District of Azerbaijan.

Ramana Tower (Azerbaijani: Ramana qalası) – is a tower in Ramana village of Baku and dated back to the 12th century. Height of the tower is 15 metres (49 ft). Exact construction date of the tower, which is built of white stone, is not known. It is considered that the tower was built for the purpose of defense and used as a castle during the Shirvanshahs’ reign.

The Baku Ateshgah (from Persian: آتشگاه‎, Atashgāh, Azerbaijani: Atəşgah), often called the "Fire Temple of Baku" is a castle-like religious temple in Surakhani town (in Suraxanı raion), a suburb in Baku, Azerbaijan.

Based on Persian inscriptions, the temple was used as a Hindu, Sikh, and Zoroastrian place of worship. "Atash" (آتش) is the Persian word for fire. The pentagonal complex, which has a courtyard surrounded by cells for monks and a tetrapillar-altar in the middle, was built during the 17th and 18th centuries. It was abandoned in the late 19th century, probably due to the dwindling of the Indian population in the area. The natural eternal flame went out in 1969, after nearly a century of exploitation of petroleum and gas in the area, but is now lit by gas piped from the nearby city.