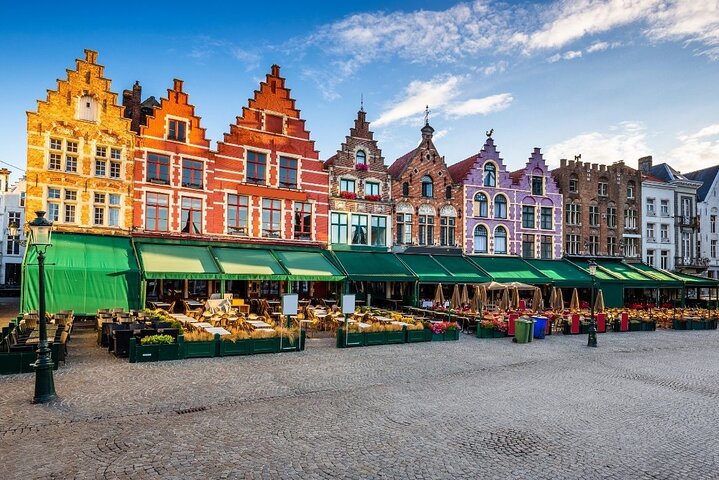 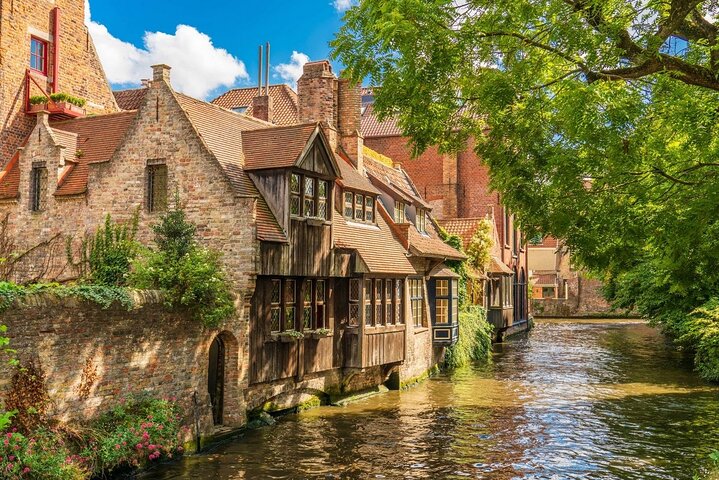 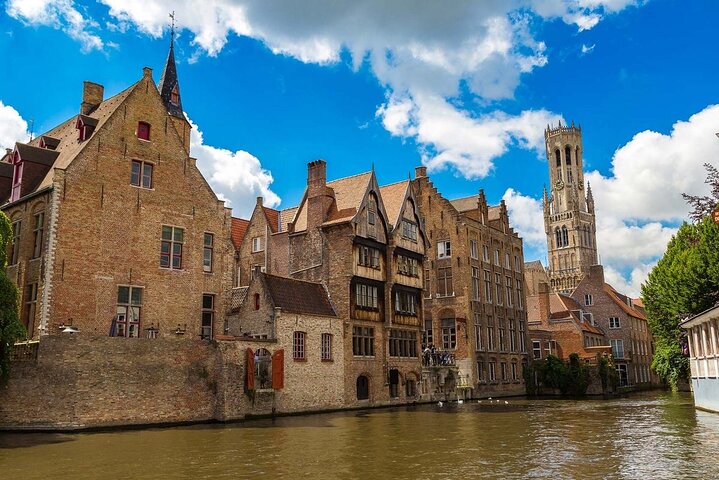 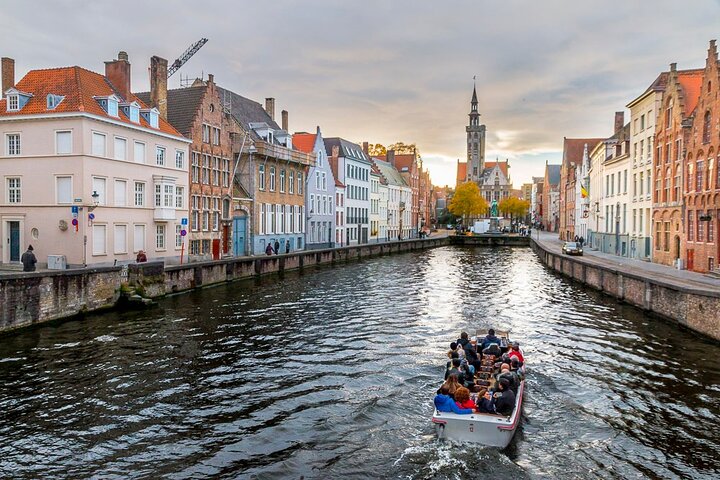 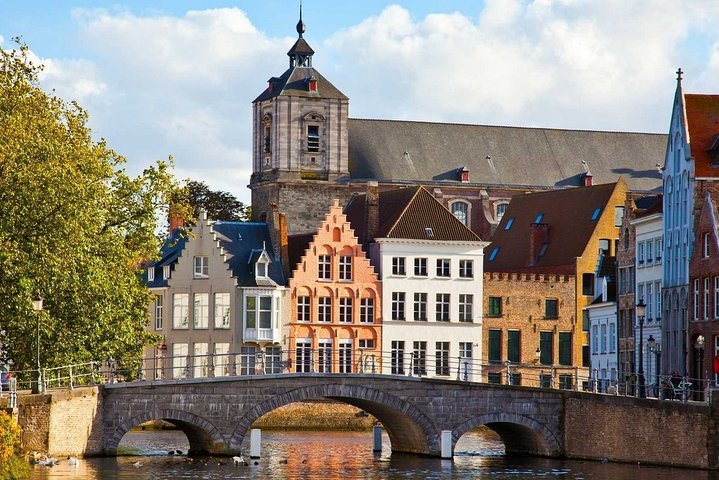 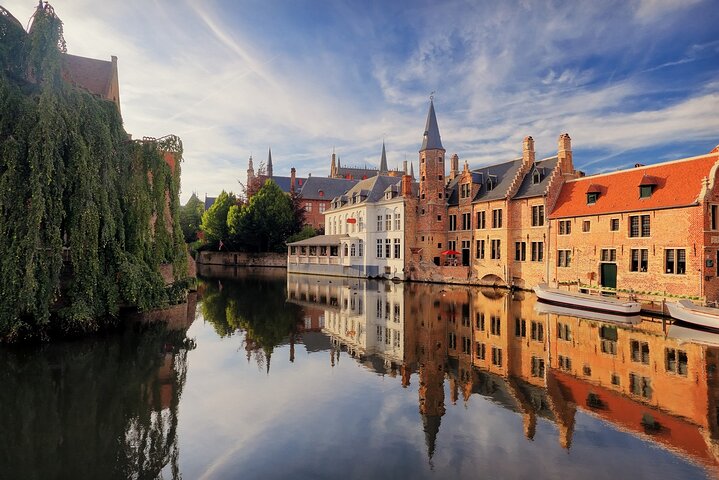 Historic Centre of Bruges is an exceptional sample of an architectural ensemble, demonstrating important milestones in the cultural and commercial areas in medieval Europe. Brugge has a great-preserved medieval city center that is perfect for exploring on foot, but you will also soon see why Bruges has been compared to Venice, and you really must experience a relaxing boat ride along the winding canals of Bruges.

Meet your guide at the security terminal (ABC Terminal) of the port as this is the closest point where guides can pick up guests doing private tours.
After a 30-minute drive from Zeebrugge, you arrive at Bruges.
During the walking tour of Bruges, you will see all main sights of the city.
The Bruges townscape contains many small, whitewashed almshouses, usually grouped around an inner voice. This social housing " Avant la Lettre " were established from the 14th century by wealthy citizens or guilds. Scattered throughout the city, there are 46 church complexes have been preserved, which are mainly inhabited by elderly people. A beautiful complex is the Almshouse De Meulenaere and Sint-Jozef (Nieuwe Gentweg 8-22) Bruges has a total of 46 almshouses in the city center. These houses, small and white, with the name of the founder painted on the facade, where build out of social consideration from the 14th century on.

This chapel is located in a corner of the Burg square and judging by the richely decorated facade you would not immediately expect a chapel behind it. This flamboyant facade is actually a 16th century staircase that connects two underlying chapels: the Romanesque Saint-Basiliuschapel and the (neo)gothic Holy Bloodchapel. The Basilica of the Holy Blood is a Roman Catholic minor basilica in Bruges. Originally built in the 12th century as the chapel of the residence of the Count of Flanders, the church houses a venerated relic of the Holy Blood allegedly collected by Joseph of Arimathea and brought from the Holy Land by Thierry of Alsace, Count of Flanders. Built between 1134 and 1157, it was promoted to minor basilica in 1923.

The Belfry of Bruges is a medieval bell tower in the center of Bruges, Belgium. One of the city's most prominent symbols, the belfry formerly housed a treasury and the municipal archives and served as an observation post for spotting fires and other danger. A narrow, steep staircase of 366 steps, accessible by the public for an entry fee, leads to the top of the 83 m (272 feet) high building, which leans 87 centimeters to the east. To the sides and back of the tower stands the former market hall, a rectangular building only 44 m broad but 84 m deep, with an inner courtyard. The belfry, accordingly, is also known as the Halletoren (tower of the halls). The belfry is a key component of the UNESCO world heritage site of the historic center of Bruges. The building is a central feature of the 2008 film In Bruges and is also mentioned in the novel Cloud Atlas.

De Halve Maan (The Half Moon) is a beer brewery in Bruges, Belgium. De Halve Maan brews Brugse Zot ("Bruges Fool"), Straffe Hendrik ("Strong Henri"), Blanche de Bruges/Brugs Tarwebier and other beers. The Straffe Hendrik and Blanche de Bruges/Brugs Tarwebier brands had been sold to other breweries, but De Halve Maan has recently bought them back and is returning production to Bruges. Beer has been brewed at De Halve Maan's location for approximately 500 years. The current brewery has been operating since 1856. The brewery has been in the same family for five generations.

The 'Princely Beguinage Ten Wijngaarde' with its white-colored house fronts, tranquil convent garden, and beguinage museum was founded in 1245. This little piece of world heritage was once the home of the beguines, emancipated lay-women who nevertheless led a pious and celibate life. Nowadays, the Beguinage is inhabited by the Sisters of the Order of Saint Benedict. In the small beguine house, you can still gain insights into what daily life was like in the 17th century. Please note: the entrance gates are always closed (and remain closed) at 6.30 p.m. The Bruges Begijnhof (beguinage) has been a World Heritage Site since 1998.

The monumental City Hall (1376-1421) is one of the oldest in the Low Countries. It is from here that the city has been governed for more than 600 years. An absolute masterpiece is the Gothic Hall, with its impressive vault and 20th-century murals depicting the history of Bruges. The adjacent historic hall sheds further light on the governance of Bruges over the centuries, using original documents and paintings. On the ground floor, you are brought face to face with life-size portraits of the city’s rulers and can also learn more about the evolution of the Burg.

If you are in love now (or soon to be) the Lake of Love in Minnewater Park is the place to be. Let the unfortunate and tragic romance of Minna and her warrior love Stromberg be your lucky spark when you cross over the bridge. Enjoy the scenery from the lake bridge, one of the benches along the lake or stroll through the calm Minnewaterpark.

Vismarkt (Fish Market) At first, fish was sold on one of the Markt’s corners, but as the townspeople complained about the stench, the fishmongers were forced to move and sell their wares here. In the covered arcade (1821), specially erected for the purpose of selling fish, fresh seafish was sold, a delicacy that only the rich could afford. Today you can still buy your fresh saltwater fish here every morning from Wednesday to Saturday.

Summer or winter, morning or evening, sun or rain…Rozenhoedkaai has the enthralling ability to always make a stunning impression. It should come as no surprise that this continues to be one of the most photographed spots in Bruges. Here anyone can create his or her picture-perfect postcard of Bruges. Rozenhoedkaai’s sophisticated class makes it the ideal location to pause for a moment and together with your loved one enjoy one of Bruges’ most timeless sceneries.

The Markt ("Market Square") of Bruges is located in the heart of the city and covers an area of about 1 hectare. Some historical highlights around the square include the 12th-century belfry and the West Flanders Provincial Court (originally the Waterhall, which in 1787 was demolished and replaced by a classicist building that from 1850 served as a provincial court and after a fire in 1878 was rebuilt in a neo-Gothic style in 1887. In the center of the market stands the statue of Jan Breydel and Pieter de Coninck. In 1995 the market was completely renovated. Parking in the square was removed and the area became mostly traffic-free, thus being more celebration friendly. The renovated market was reopened in 1996 with a concert by Helmut Lotti.

One of the best thing you can do in Bruges is to take a beautiful short walk along the ramparts with its windmills. It is nearby the city center, so after discovering shopping places, beers and coffees, this is a great opportunity to escape from the busy city life for a moment. Belgium has a rich mill history. If you check a map of Bruges from the 16th century, you can see there were no less than 23 windmills here! They were part of the town walls since the end of 13th century. Nowadays, there are four remaining mills between the Dampoort and the Kruispoort. Koeleweimill Koeleweimill (or also Coelewey mill) was used for corn, always known as Bosterhoutmolen and was originally located in Meulebeke. The city of Bruges reconstructed the mill on its current place after it was broken down in 1980. Originally it was built in 1765 as a wooden mill on a closed brick base.

After a pleasant day touring Bruges, your private guide will return you to your ship to continue your cruise with some lovely new memories.