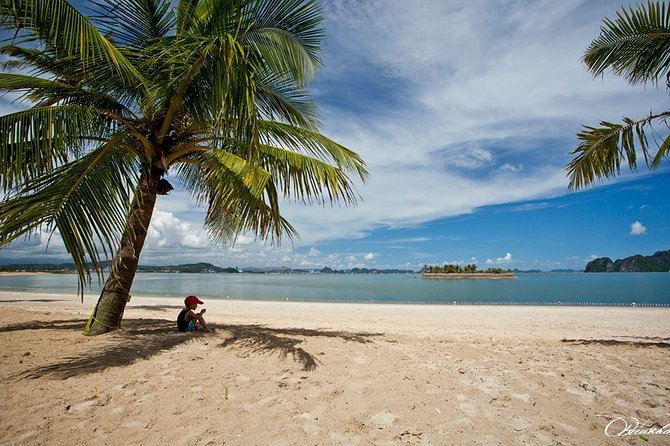 Hạ Long Bay, in northeast Vietnam, is known for its emerald waters and thousands of towering limestone islands topped by rainforests. Junk boat tours and sea kayak expeditions take visitors past islands named for their shapes, including Stone Dog and Teapot islands.

Towering limestone pillars and tiny islets topped by forest rise from the emerald waters of the Gulf of Tonkin. Designated a World Heritage Site in 1994, Halong Bay's scatter of islands, dotted with wind- and wave-eroded grottoes, is a vision of ethereal beauty and, unsurprisingly, northern Vietnam's number one-tourism hub.

Sung Sot Cave was allegedly first discovered by the French in 1901, who took it upon themselves to name it “Grotte des Surprises”, or Surprising Cave, because of its ‘surprising’ beauty (although the name didn’t catch on until a good 40 years later). The cave welcomed its first visitors in 1993, a mere one year before Halong Bay would receive its first bestowment of World Heritage site status from UNESCO.
From 520-470 million BC, Halong Bay was subject to intense tectonic plate movements, along with severe rainfall and flooding which caused the formation of underwater mountains. Millions of years on, the Halong Bay area began to experience a period of extreme heat and drought.
The change in weather patterns is what eventually contributed to the emergence of the thick limestone formations that we can still see today. The steady erosion of these sea mountains eventually delivered to us the much-coveted caves of Halong Bay. The advancement of the sea and its effects on the formation of the caves can be seen on the ceilings, where a ripple-like pattern is often visible.

The name Ti Top is named by the most respectful hero of Vietnam, President Ho Chi Minh, after the Russian astronaut Gherman Titov on the occasion of his first visit to Halong Bay in 1962.
Different from other popular tourist sites in Halong, Ti Top Island does not only possess breath taking romantic landscapes, but also has a heavenly beautiful beach called Ti Top which is perfect for any beach activity.
Although its size is not really big comparing to other beaches in Halong, Ti Top Beach is especially famous for its fresh atmosphere, clean water, and smooth white sand that create a great ambiance for tourists to relax. Thanks to all these, Ti Top Beach draws a huge amount of visitors during summer of special occasion.
In an attempt to serve the increasing number of tourists to Ti Top Island, there have been numerous high-end resorts, hotels, restaurants, bars, souvenir shops, life-buoy renting, skydiving, or kayak facilities built recently.

Thien Cung Cave is related to a legend about an ancient Dragon King. Accordingly, after the Dragon King helped people defeating invaders, he returned to his cave. In that year, the severe drought happened, which greatly affected crops, therefore, people had to ask for the help of the Dragon King. One day, there was a young couple determining to seek the Dragon King. They had a daughter named May. When May grew up, she was fall in love with Dragon Prince. Later on, their wedding was held during 7 days in the center of the cave. It took place in a happy and boisterous atmosphere with dragons flying in the clouds, baby elephants and lions dancing, huge pythons slithering around old banyan tree, and giant eagles outstretching their wings...

Floating on the emerald water, Đầu Gỗ Island (Wooden Head Island) is amongst the most famous tourist attractions in Halong Bay. Inside Đầu Gỗ Island, tourists will find Đầu Gỗ Cave a very interesting cave.
From afar, the cave entrance is a jellyfish look-alike 90 steps stair. Into the cave, a massive system of stalagmites and stalactites resembling stony waterfalls would make anyone feel like being one with the nature.
The cave has three main compartments. The first area has a curved shape which is filled up by natural light. The celling of this area is a giant oil painting describing primitive landscapes with rows of stalagmites and stalactites changing their color upon the intensity and angle of the light. Many tourists love letting their imagination go wild with all the light reflecting on those stalagmites and stalactites.
Passing the first area by going through a narrow entrance, tourists will get to the second part. It is a little bit lack of light, but it has a more intriguing ambiance of fuzzy picture formed by the harmonious combination of light and stalactites that stimulate your curiosity but also be a little bit creepy.
The adventure continues with a sudden discovery of the last massive. Here, there is a sacred fairy well that is said to be used by beautiful fairies descending from the heavenly kingdom...

Informacion Adicional
"Confirmation will be received at time of booking, unless booked within 6 hours of travel. In this case confirmation will be received as soon as possible, subject to availability"
"Wheelchair accessible"
"Stroller accessible"
"Near public transportation"
"Infant seats available"
"Most travelers can participate"
"This experience requires good weather. If it’s canceled due to poor weather, you’ll be offered a different date or a full refund"
"This experience requires a minimum number of travelers. If it’s canceled because the minimum isn’t met, you’ll be offered a different date/experience or a full refund"
"This is a private tour/activity. Only your group will participate"

Hora de Inicio: 8:00 AM
Duración: 12 Hours
Lugar de comienzo: Traveler pickup is offered
we pickup all guests at all hotels in the old quater