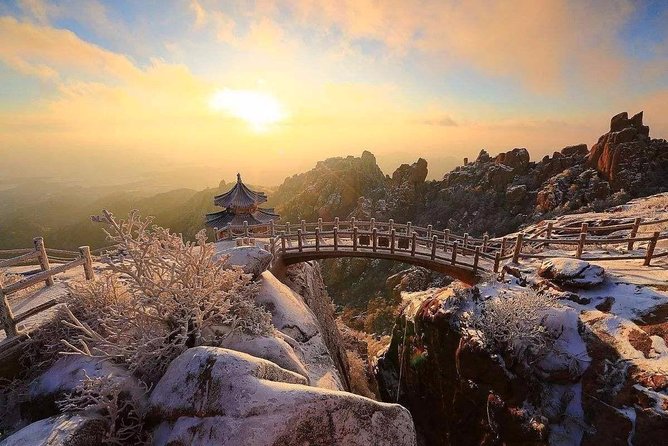 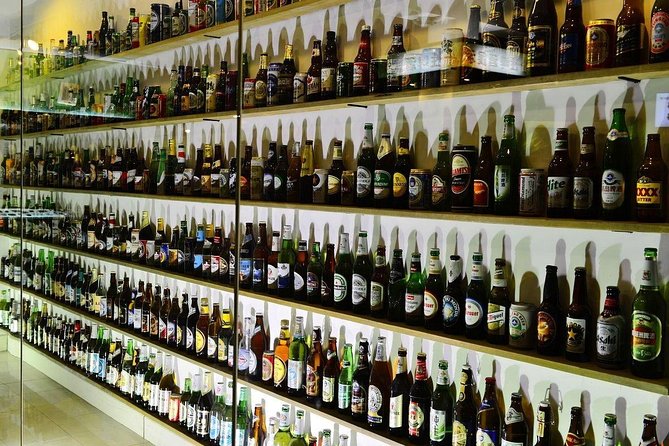 Join this private day tour to discover Qingdao from Jinan by bullet train. Take the morning train to Qingdao, meet your local guide at train station and head to Laoshan Scenic Area. Use the convenient cable car ride to the top of the mountain. Soak up famous sights like the Taiqing Palace and Longtan Waterfall. A friendly local guide accompanies you on way to share important facts about Taoism history and architecture along the way. After lunch ,choose the sites in the city you want to see. Tour including English speaking tour guide, private vehicle, train tickets, entrance fee, cable car round trip, lunch and Beer. You can choose to end your tour in Qingdao or return Jinan.

Your driver will pick you up in the lobby of your Jinan Hotel, you will be transferred to Jinan Railway Station, relax on the 2 hour bullet train ride to Qingdao.

Upon arrival, your tour guide will pick you up from the railway Station.

Facing the Yellow Sea, Laoshan Mountain is famous for its marvelous mountainous scenery and coastal landscape. Featured in many folk legends and festivals, Laoshan is also known as the birthplace of Taosim in China.

Choose one routine suits you, then follow your tour guide to explore. Tour including cable car round trip to save your energy.

Typically you will choose the The Southern Line

On the first line there are not only marvelous landscapes but also sacred Taoist Palaces. Follow your tour guide to take the cable car up ,and visit the significant points include the Taiqing Palace, Xufu Islet and Longtan Waterfall.

The Taiqing Palace has the longest history of these buildings spanning more than two thousand years. It has 155 rooms. They were well preserved and holds the typical architectural style of the Song Dynasty (960-1279).

Follow your tour guide to stroll around different halls and courtyards, get to know the history about Taoism and its belief.

Continue to enjoy the Longtan Waterfall. Afterwards, you will stop for lunch

The most famous sight of Beijiushui is Chaoyin Waterfall. The water crashes against the rocks, producing a huge sound similar to waves crashing against the seashore.

You also can choose to take the The Central Line

This line mainly focuses on Beijiushui. The name Beijiushui derives its meaning from Laoshan Mountain that has nine crooks, thus making the river turn nine times. At every corner, totally different sights can be found. The flowers, trees and odd rocks on both sides of the river emphasize the elegant beauty of the water.

Heading back to city, enjoy lunch in the local restaurant, then choose the city highlights you want to go.

Maybe walking pass by Qingdao Yingbinguan, to enjoy the royal European style building which used to be the residence of the German Governor in Qingdao.

Or Continue to Badaguan Scenic Area which features foreign villas and paths. Stroll around the area with your tour guide, enjoy the peace and unique architecture.

The most famous line is the The Eastern Line

It includes the Taiping Palace, the Lion Peak, Huayan Temple, Naluoyan Cavern and other sights.

Naluoyan Buddha Cavern is a natural granite cavern 7 meters (about 23 feet) wide and 15 meters (about 49 feet) high. More than 100 people can stand inside at one time. Its structure is quite unique. The smooth walls and flat ground are just as they were pared. On the wall of the cavern protrudes a thin stone, like a Buddha niche

You also can choose to travel to Zhanqiao Pier which is the landmark of Qingdao. Walk with your tour guide to Huilan Pavilion at the bridge end

Constructed in 1932, designed by German designer in the light of Gothic and Romanesque, the Catholic Church of Qingdao, with the autonym being St. Michael's Church, is the largest Gothic architecture in Qingdao, the only consecration church in China, and a masterpiece of Christian architecture art.

If you are not interested in the sites above, then you can choose to visit Qingdao Beer Museum.

German Beer Company Qingdao Branch established in 1903, China’s first brewing factory that built with European technology was the predecessor of the Tsingtao Brewery Company. At present, the Qingdao Beer Museum owns 55 brewing factories and malt factories in 18 cities and provinces in China. The one-hundred-year old Tsingtao Beer has created its own history and culture. The museum was designed by an outstanding architect and designer utilizing both Chinese and western culture.

Follow your tour guide to visit the museum and sample various freshly brewed beers, you can purchase variety of souvenirs.

After the tour, you can choose to end your tour in Qingdao or return Jinan.

Informacion Adicional
"Confirmation will be received at time of booking"
"A current valid passport is required on the day of travel"
"Infants must sit on laps"
"Most travelers can participate"
"Not wheelchair accessible"
"This is a private tour/activity. Only your group will participate"

Duración: 6 To 8 Hours
Lugar de comienzo: Traveler pickup is offered
Your driver will pick you up in the lobby of your hotel by holding your name sign