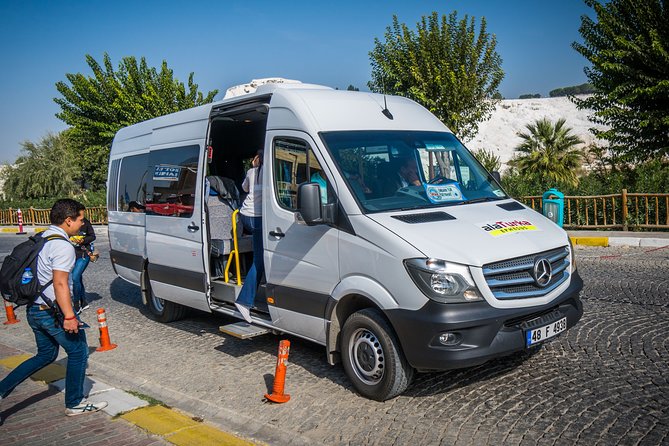 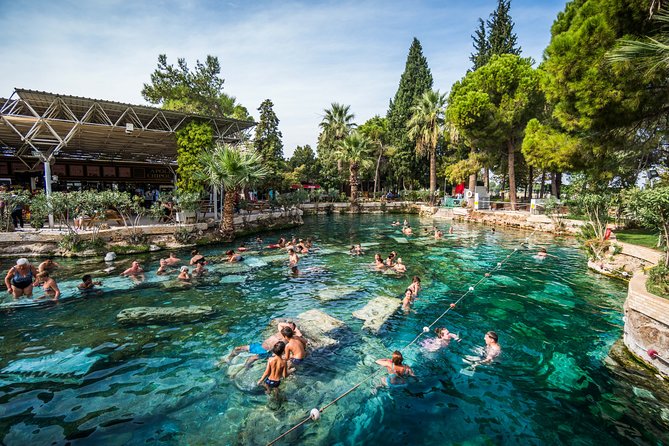 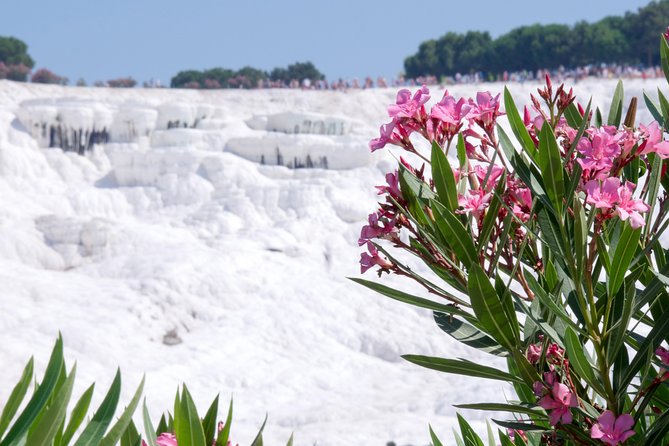 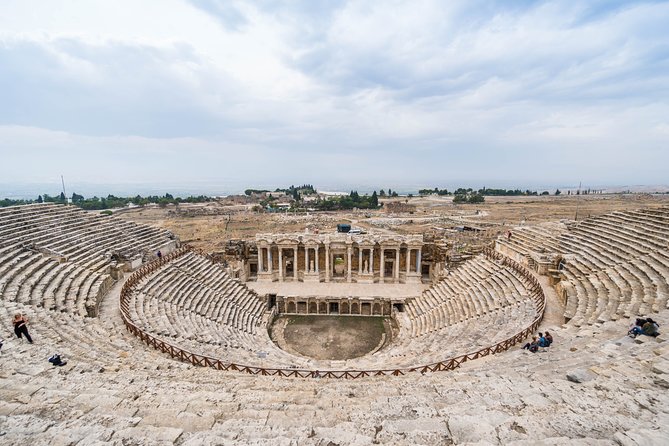 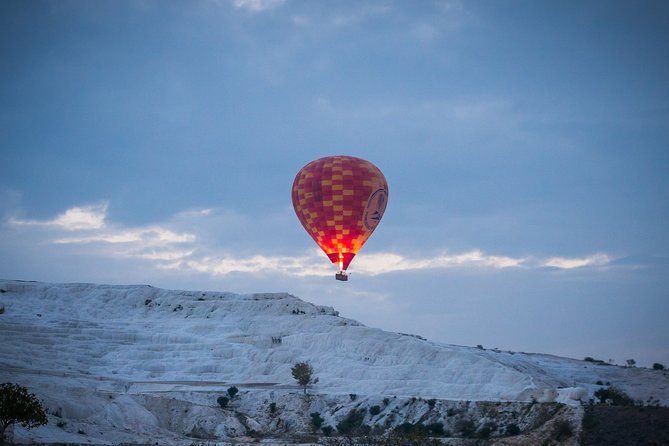 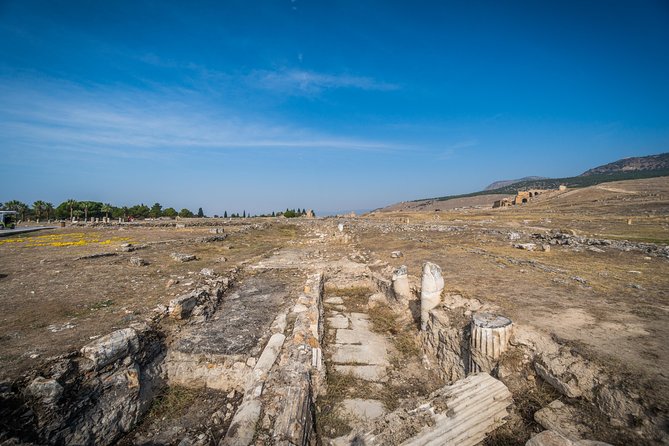 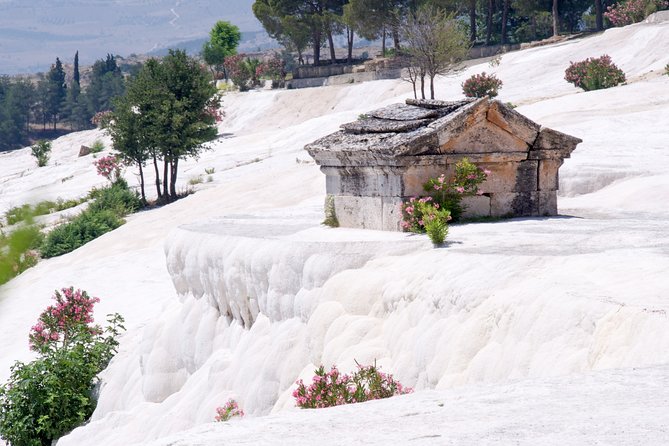 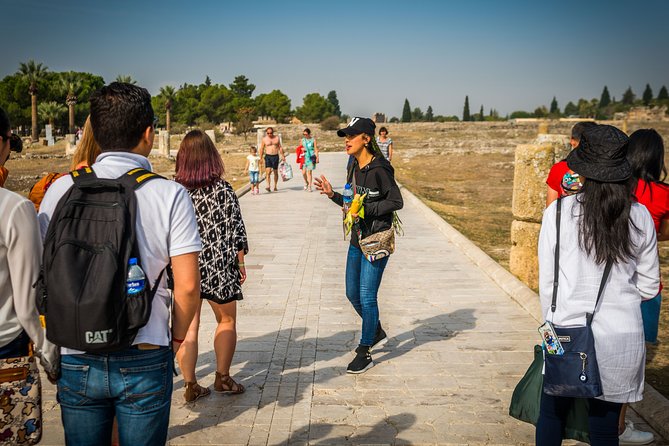 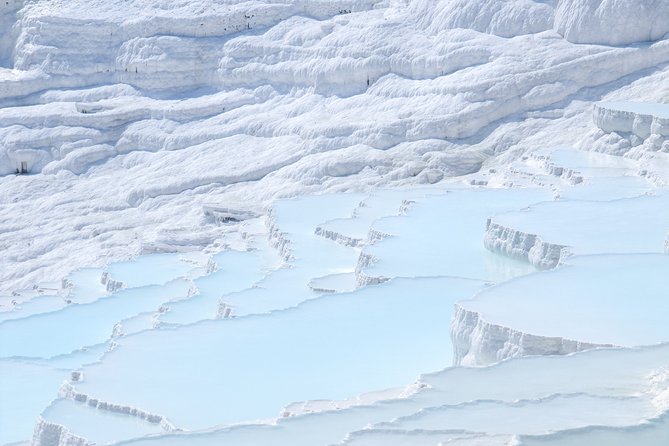 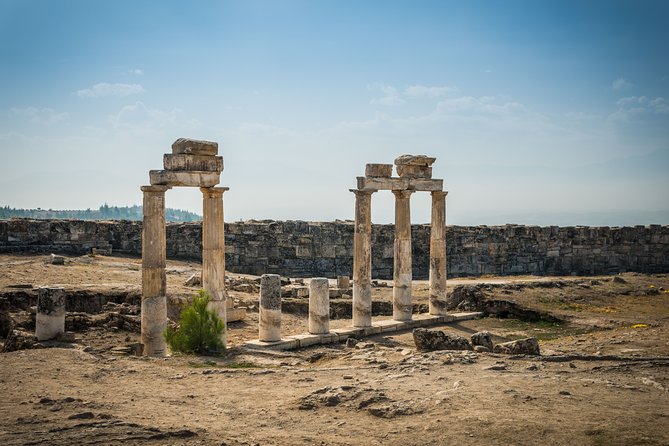 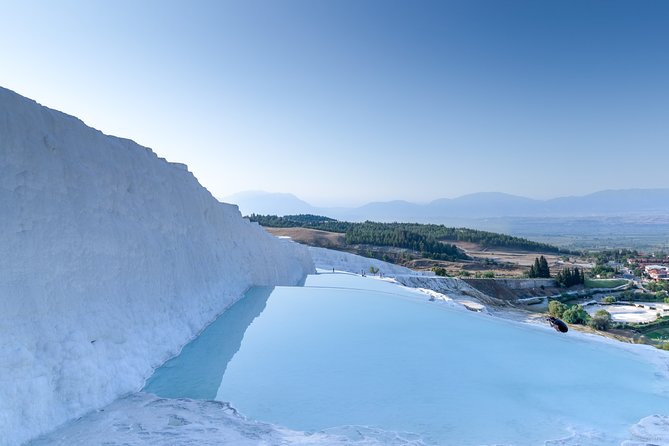 This tour takes you from Selcuk out to the famous site of the Cotton Cliffs of Pamukkale. There will be a fully guided tour of the World Heritage Listed site and you will also have a guided tour of Hierapolis ruins whilst there. The full day tour with professional local guide is a fantastic way to learn about this popular spot in Turkey.

The ancient city of Hierapolis is located on a 200 meter high terrace of limestone deposits amid a wonderland of mineral water pools and petrified limestone waterfalls. The ancient city overlooks the modern town of Pamukkale in Turkey's Inner Aegean region. Founded as a thermal spa in 190 BC by Eumenes II, the King of Pergamon, the city was most likely named for Hiero, the wife of the legendary founder of the Pergamene dynasty.

It is located in the middle of Hierapolis and is very well preserved. it was built during the reign of Emperor Hadrian in 2nd century AD. In Emperor Severus' period the cavea and the stage of theatre were restored by using the remains of another old theatre built earlier on the north of the city. Roman Theatre had a capacity of 8500 – 10000 spectators and was divided into two parts as upper and lower parts of seat by a diazoma.

Located on the main street between the theater and a sacred pool, this forty-by-sixty-foot temple was dedicated to the supposed god of light, Apollo. The entrance faced west and was approached by a broad flight of stairs.

The surreal, brilliant white travertine terraces and warm, limpid pools of Pamukkale hang, like the petrified cascade of a mighty waterfall, from the rim of a steep valley side in Turkey’s picturesque southwest. Truly spectacular in its own right, the geological phenomenon that is Pamukkale, literally "Cotton Castle" in Turkish, is also the site of the remarkably well-preserved ruins of the Greek-Roman city of Hierapolis. With such a unique combination of natural and man-made wonders it’s little wonder that Pamukkale-Hierapolis has been made a Unesco World Heritage site. With over two million visitors annually, it is also Turkey’s single most visited attraction.

Hora de Inicio: 7:30 AM
Duración: 11 Hours
Lugar de comienzo: Traveler pickup is offered
HOTEL PICK-UPS
- From Selcuk or Kusadasi hotels are usually from 7.15 AM to 07.45 AM.
- Pick up times may vary depending on
a) your pick up point
b) how many other additional people/pick up points we have that day.
This means the final pick up time will be decided 1 day before.

- IT IS IMPORTANT that you contact our pick up operator on (call/WhatsApp/SMS) to find out your final pick up time.

MEETING POINT
If you are coming to our office to meet the tour, our office is located next to Ephesus Museum in Selcuk, opposite Selcuk bus station. Address: Ataturk Mah. Ugur mumcu sevgi yolu sok. No 16/b Selcuk, Izmir