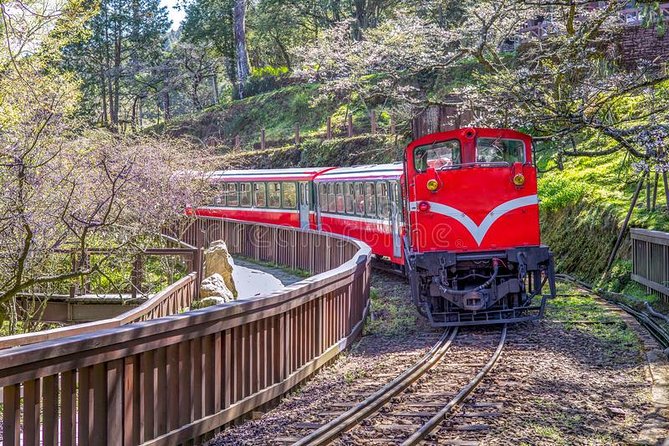 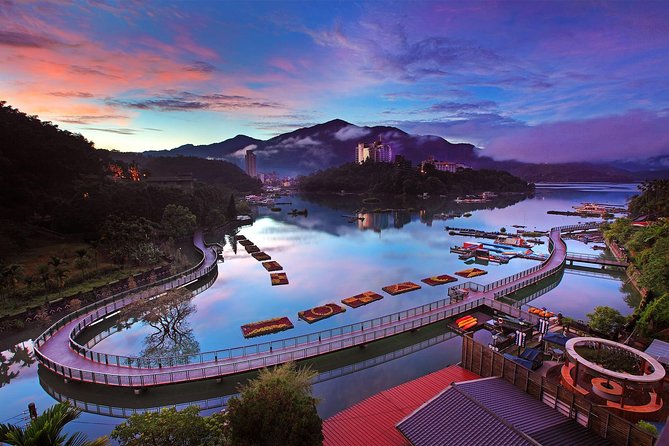 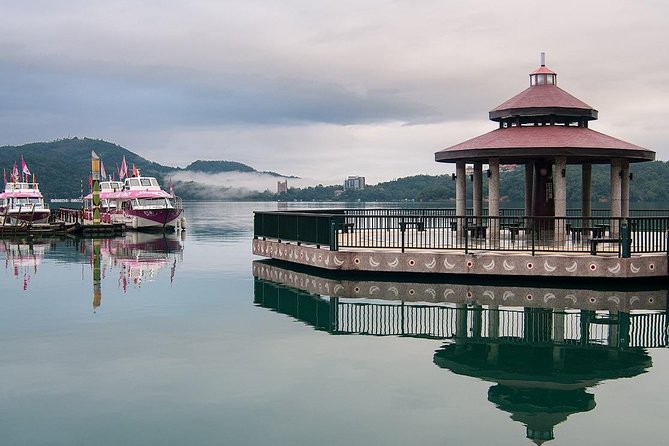 In 3 days, we will take you to visit Taiwan's most scenic places. You are going to visit Sun Moon lake, Chunghua Lukang Historic Area and Alishan National Scenic Area. You can take sightseeing boat to see the Sun Moon lake and take a Alishan mountain train to have fun in Alishan.

Stop At: Yidashao Pier, Yidashao, Riyue Vil., Yuchi Township Taiwan
Sun Moon Lake Yidashao was formerly known as Dehua Club. It was originally an old-style building area and was the main area of activity for the Thao people. Today it is planned to be a street with strong Thao cultural characteristics. There are many Aboriginal crafts on both sides of the street. Organize various events. Since Yada Shao Pier is an important base for taking yachts, since 2007, sporadic merchants originally named "Yada Shao Shopping Street" beside the wharf have been assembled into a 328-square-foot "Chalu Bazaar", which contains various arts. Shops, Thao-style meals, gourmet snacks, and aboriginal agricultural specialties are on display for sale. In addition to tasting delicious Thao cuisine, there are also famous Sun Moon Lake black tea, shiitake mushroom eggs, and mountain pork buns. , Xiaomi Mochi, etc., eat all the way along the road and have fun.
Duration: 30 minutes

Stop At: Xuanzhuang Temple, No.389 Zhongzheng Road, Riyue Village, Yuchi Township Taiwan
Xuanguang Temple was built in 1955. It was originally the place where Xuanzang master Shiriko was retrieved from Japan and temporarily enshrined. In the Republic of China 54 (1965), Xuanzang master Shiriko was only transferred to the temple. To Xuanzang Temple. The temple is located at the land junction of Sun Lake and Moon Lake. The exterior is a Japanese-style temple building, which houses the golden body of Master Xuanzang. There is a pier under the temple, tourists can take a boat to the pier, and then pick up the level to visit.
Duration: 20 minutes

Stop At: Taichung, Taichung
You will take photos at Miyahara Ophthalmology.It was built by the Japanese doctor of ophthalmology, Takeo Miyahara, and it was the largest ophthalmology clinic in Taichung during the Japanese era. In 1945, Japan defeated, Takeo Miyahara returned to Japan. With the change of the times, the old sanitary hospital gradually became a dangerous building, and it became a overgrown ruin in the earthquake of 1992. It took a year and a half until the "Sunrise" management team, combined with two architects and a doctor of monument restoration to create a modern sunrise Miyahara Ophthalmology.
Duration: 20 minutes

No meals included on this day.
Accommodation included: 4 Stars Hotel
Overnight at LAI LAI HOTEL or FUSHIN HOTEL or equivalent

Stop At: Lukang, Lane 42, 505 Taiwan
Lugang Old Street is located in Lugang Town, Changhua County, Taiwan. The broad term "Lugang Old Street" covers the entire historical and historical blocks of Lugang Town. Lugang was the most important port for foreign business in the Netherlands and the Qing Dynasty. Prospered by the development of commerce. Feel the beautiful people and things in Lugang. There are still a lot of foods in Lugang, such as noodle paste, beef tongue, noodle tea, phoenix cake, meat buns, and fried dumplings.
Duration: 2 hours

Stop At: Bagua Mountain, No.8-1, Bagua Rd., Zhanghua City, Changhua City Taiwan
Among the Bagua Mountains, the most well-known is the "Big Buddha Scenic Area", which is the most representative Buddhist sacred place in Changhua. For example, the Big Buddha was built in the 50th year of the Republic of China, and it is seven feet tall. In the area, there are many facilities and attractions such as ecological park, Shenfo Avenue, fine garden park, fountain performance area, tourist service center, etc.
Duration: 1 hour

Stop At: Lukang Gentlemen Lane-Molu Lane, Len., 238, Sanmin Rd., Lukang Township Taiwan
Moru Lane refers to a long lane located in the vegetable garden of Lugang Town, Changhua County, Taiwan, and is located at the southwestern end of Lugang City. During the Qing Dynasty, Moruxiang was originally a gully for the residents to discharge sewage to the old harbor ditch. During the Japanese rule, its ditch was covered with red bricks and gullies, gradually forming the current channel.
Duration: 10 minutes

Stop At: Alishan National Forest Recreation Area, No. 59, Zhongzheng Vil., Zhongzheng Vil., Alishan Township Taiwan
Alishan National Scenic Area
Alishan is blessed with bountiful natural resources, such as sun rise views, a sea of clouds and old forests. Especially as a popular folk song goes, Alishan has amazed people with its “lush green mountains and deep blue waters.” No matter in spring, summer, autumn or winter, visitors can expect to appreciate some of its beauty. For years, Alishan has been famous for its historical forest railway and indigenous tribes, too.
Duration: 5 hours

Stop At: Alishan, Alishan, Chiayi County
The Alishan Forest Railway is the only alpine forestry railway system still operating in Taiwan, and it is also Taiwan's first national important cultural landscape. Its routes are mainly located in Chiayi City and Chiayi County, but some sections of the Zhushan Line are located in Nantou County. Xinyi Township. The railway was built in the Japanese era to transport the forest output from the Alishan Forest Farm outward; after the forest farm felling business, passenger and sightseeing became the main functions of the railway.
Duration: 30 minutes

Informacion Adicional
"Confirmation will be received within 48 hours of booking, subject to availability"
"Daily service"
"A minimum of 2 people per booking is required"
"Not wheelchair accessible"
"Near public transportation"
"Infant seats available"
"Not recommended for travelers with back problems"
"Not recommended for pregnant travelers"
"No heart problems or other serious medical conditions"
"Most travelers can participate"
"This tour/activity will have a maximum of 15 travelers"

Traveler pickup is offered
We pick up from any hotel in Taipei City.
If your Hotel is not in Taipei City; we will pick you up at Caesar Park Hotel Taipei (it is across from Taipei Main Station.)