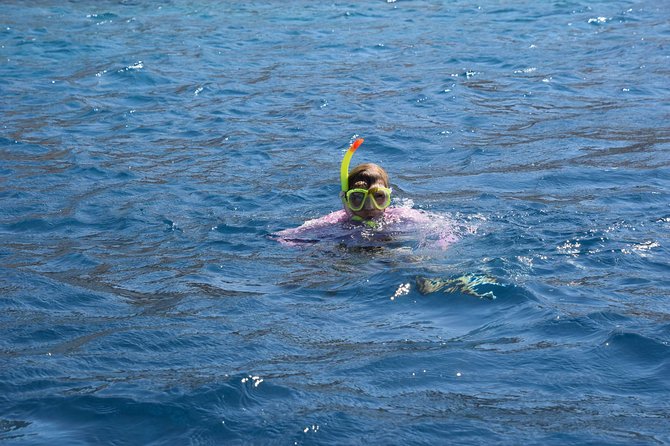 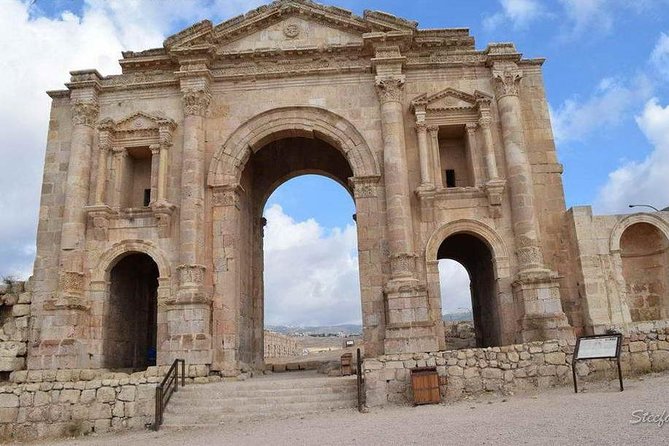 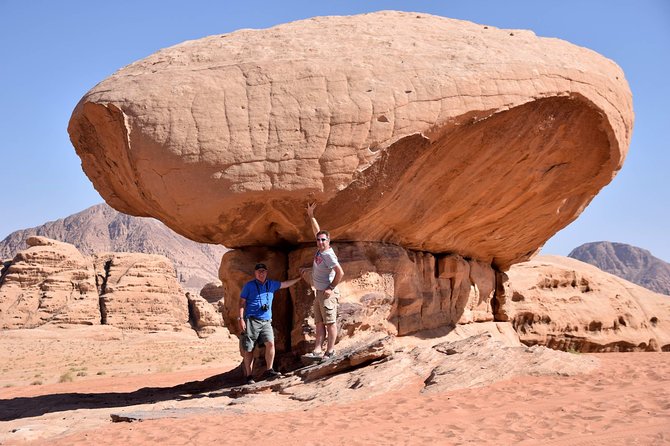 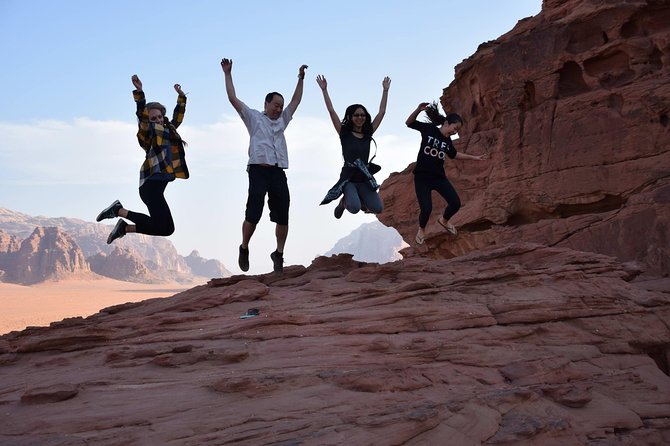 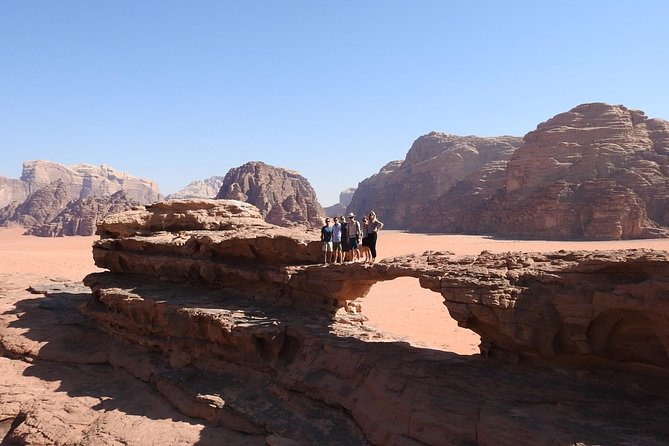 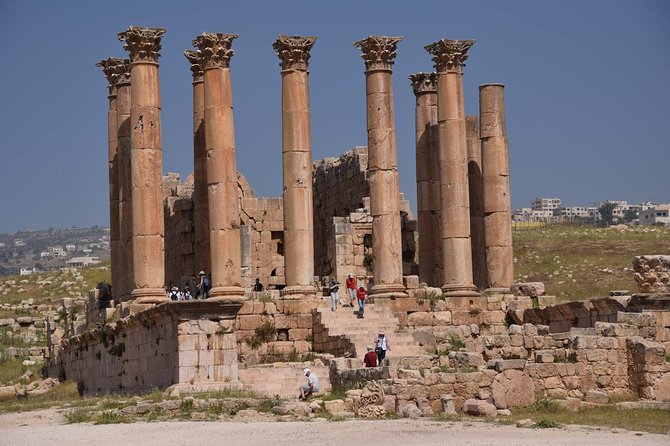 Enjoy a 4-day small group tour to the Baptism site at Jordan River, Madaba city churches, Mount Nebo, Jerash, Ajloun Castle, Petra, Wadi Rum, Red Sea at Gulf of Aqaba (During summer season only) and the Dead Sea. Spend two nights in Amman in 3* rated hotels (rooms are single, double or triple beds), including breakfast. Also sleep overnight at a Bedouin camp at Wadi Rum including dinner and breakfast. Entrance fees and local guide services at each attraction are NOT included. The order of sites visit days might change depends on our tours schedule. Accommodation is not shared with other group parties ( Separate rooms for separate bookings).

NB: Aqaba city is skipped in winter time due to short day light ( November to end of March)

Stop At: The Citadel, K. Ali Ben Al-Hussein St. 146, Amman Jordan
The Amman Citadel is a historical site at the center of downtown Amman, the capital of Jordan. The L-shaped hill is one of the seven hills that originally made up Amman. Evidence of occupation since the pottery Neolithic period has been found and the hill was fortified during the Bronze Age.
Duration: 1 hour

Stop At: The Baptism Site Of Jesus Christ, Bethany Jordan
Al-Maghtas, meaning "baptism" or "immersion" in Arabic, is an archaeological World Heritage site in Jordan on the east bank of the Jordan River, officially known as Baptism Site "Bethany Beyond the Jordan"
Duration: 2 hours

Stop At: Mount Nebo, Madaba Jordan
Mount Nebo is an elevated ridge of the Abarim in Jordan, approximately 710 metres above sea level. It is mentioned in the Hebrew Bible as the place where Moses was granted a view of the Promised Land
Duration: 1 hour

Stop At: Madaba, Madaba, Madaba Governorate
Madaba is an ancient town in Jordan, southwest of the capital Amman. It’s known for its 6th-century mosaic map of the Holy Land in the Greek Orthodox Church of St. George. The Madaba Archaeological Park preserves the mosaic-rich Church of the Virgin Mary and artifacts from the Hellenistic, Roman, Byzantine and Islamic eras. Northwest, the biblical hill of Mount Nebo overlooks the Jordan Valley and the Dead Sea.
Duration: 1 hour

No meals included on this day.
Accommodation included: One night sleep at Amman in 3 stars rated hotel in included.

Stop At: Petra - Wadi Musa 77110 Jordan
Morning departure from Amman via the desert high way to Petra – Wadi Mousa and start Petra tour by passing the marvelous Siq reaching The Treasury, and moving afterwards toward the Theater and later to The Monastery which is beautifully carved, though much less decorated than the Treasury, and so huge that even the doorway is several stories tall - So you would actually be able to cover those two main trails on Petra in around 4-5 hours of walking, and Moving afternoon toward Wadi Rum and spend the night in a Bedouin camp inside Rum reserve (You won’t imagine or believe that the desert can be so beautiful till you see it with your eyes).

Stop At: Dead Sea, Madaba Jordan
7:00 am: Having breakfast at the camp. 8:00 am: Starting morning Jeep tour (In Bedouins truck) and visiting some of the amazing places at Wadi Rum. 10:00 am: Moving toward Gulf of Aqaba and visiting the public beach. 1:00pm: Moving toward Dead Sea and enjoying the beach and floating at Dead Sea area. At6:00 pm: Leaving back to Amman 7:00pm: Home/Hotel drop off (Time might differ a little because day light is shorter in winter time)

Aqaba city on the Red sea is skipped during winter time due to short day light - From November to end of March.
Duration: 12 hours

Informacion Adicional
"Confirmation will be received at time of booking"
"Not wheelchair accessible"
"A moderate amount of walking is involved so wear proper shoes ( Sneakers or boots are good)."
"You may purchase Jordan Pass before your arrival to Jordan, which will wave out visa entry fees and includes 41 sites in Jordan. You may visit Jordanpass.jo for more details."
"Group Tour option is not suitable for families with kids - below 12 years - or elderly people."
"For the Group Tour Option (up to 7) : It is very important to be ready on the scheduled times particularly for pick up in the morning which is between 06:30 - 07:30 - if these times doesn't fit you or you need flexible time then this option will not work with you - go for the private tour option."
"For the Group Tours Option : Separate tents for separate bookings. The Group Tour starts from Amman city, so it is not possible to pick up from any other place - this would be possible however for the Private Tour option. One Medium size bag is allowed per traveler (No space for large size bags or more than one medium size bag ), Minimum age is 12 Years and maximum is 69 years to join (These limitations are for the Group Tours Option only )"
"This tour/activity will have a maximum of 7 travelers"

Traveler pickup is offered
We will pick up all you from your provided hotel address in Amman city.