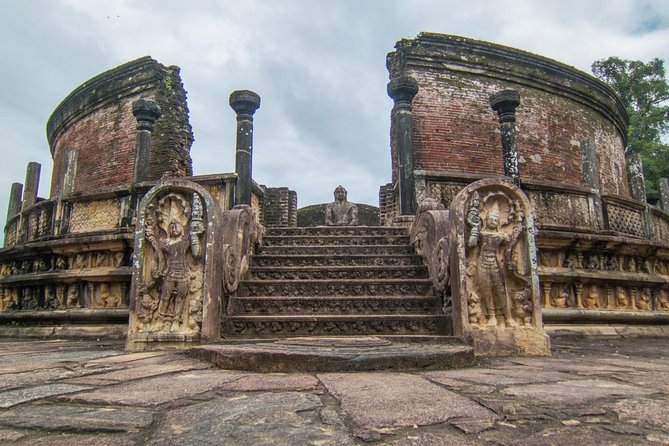 We can prepare your day tour unique and specialized - and safeguard from hidden dangers. in this case. We will send a experience and expert driver with good quality of conditioned luxury car or van, who drive carefully in Sri Lankan Roads, well expert in activities, trustworthy of your day tour.
Explore the amazing city in which Kings ruled the central plains of Sri Lanka from Polonnaruwa 800 years ago, when it was a thriving commercial and religious center. The glories of that age can be found in the archaeological treasures that still give a pretty good idea of how the city looked in its heyday.

The Gal Vihara, also known as Gal Viharaya and originally as the Uttararama, is a rock temple of the Buddha situated in the ancient city of Polonnaruwa in North Central Province, Sri Lanka. It was fashioned in the 12th century by Parakramabahu I.

The Avukana statue is a standing statue of the Buddha near Kekirawa in North Central Sri Lanka. The statue, which has a height of more than 40 feet, was carved out of a large granite rock face during the 5th century. It depicts a variation of the Abhaya mudra, and the closely worn robe is elaborately carved.

Parakrama Samudra is a shallow reservoir, consisting of five separate reservoirs connected by narrow channels in Polonnaruwa, Sri Lanka. The northernmost reservoir is the oldest and referred to as Topa wewa built around 386 AD.