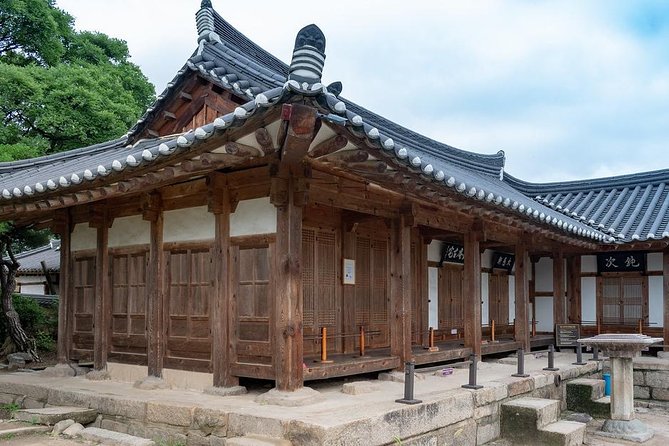 Gyeongju, historically known as Seorabeol, is a coastal city in the far southeastern corner
of North Gyeongsang Province in South Korea.
Gyeongju was the capital of the ancient kingdom of Shilla (57 BC - 935 AD),
for close to one thousand years. Later Shilla was a prosperous and wealthy country,
and its metropolitan capital of Gyeongju was the fourth lagest city in the World.
A vast number of archaeological sites and cultural properties from this period remain in the city.
Gyeongju is often referred to as "the museum without walls"
Through this tour, we will delve into brilliant legacies in Gyeongju at Shilla dynasty period.

Gyochon Traditional Village is a hanok village located in Gyeongju.
It was home to the famouse Choi Clan of Gyeongju.

Visiting Gyochon Traditional allows visitors to not only look inside the life of
Gyeongju Choi Clan and enjoy the beauty of traditional Korean houses
but also participate in various experience program
such as hanbok experience, rice cake making and many more.

The injeolmi rice cake ice cream is a "must-try" and the night view of the newly-built
Woljeong Bridge is something a tourist should not miss.

Chomsongdae literally means “a platform for observing the stars,” and is the
world’s oldest extant observatory.
Koreans paid close attention to celestial phenomena, as they believed that events
in the sky were a mirror and guide for earthly affairs. Chomsongdae, the world’s
oldest observatory, was built during the Silla period, and is rich in astronomical
symbolism as well as being carefully designed for its scientific purpose. Built in
the palace grounds, it was tall enough to offer a wide and unobstructed view of
the heavens.

From the gate of Bulguksa temple, if you follow the winding mountain path
through a nearby forest for about an hour, you will find a small wooden building
on a mountain slope. The building is 565 meters above sea level, and from it one
can make out the distant blue waves of the East Sea. Sheltered inside is the
Seokguram Grotto, a 1200 year old mystery of architectural design. According to
the Memorabilia of the Three Kingdoms (1281), the Bulguksa Temple and the
Seokguram Grotto were completed over the course of three decades under the
direction of Prime Minister Kim Tae-song, when Shilla was at the height of its
prosperity during the middle of the eighth century AD.
Of all the masterpieces of Korean art, the Seokguram might be considered the
finest. It is a sublime achievement, embodying the perfect and ideal harmony of
science, art and religion in a single entity. Scholars across the world have praised
the Seokguram Grotto, calling it “an eternal masterpiece,” “the Parthenon of the
East,” and “the most exemplary classical work of the Orient.

Mount Toham, the first point in the historic city of Gyeongju to meet the
sunrise, is a sacred mountain that has always been revered by the people of the
region. Near the bottom of the mountain is the Bulguksa temple, one of the most
beautiful shrines in Korea. Here can be found many cultural sites that appear in
Gyeongju guidebooks, such as the Blue and White Cloud Bridge stone staircases,
and the Shakyamuni and Great Treasure pagodas.

Gyeongju Anapji Pond (Donggung Palace and Wolji Pond) were the secondary palace site
which was used for the palace of the Crown Prince along with other subsidiary buildings.
It was also a banquet site for important national event and important visitors.
After the fall of Shilla, the site was abandoned and forgotten.
The pond was referred to as "Anapji" during the Koryo and Chosun period.
In the 1980s, pottery fragment with letters “Wolji” (a pond that reflects the moon)
carved onto it was found, revealing the true name of the pond.
After the discovery, the site was renamed to the current Donggung Palace and Wolji Pond.

Informacion Adicional
"Confirmation will be received at time of booking"
"Not wheelchair accessible"
"Near public transportation"
"Not recommended for travelers with back problems"
"Not recommended for pregnant travelers"
"No heart problems or other serious medical conditions"
"Travelers should have a moderate physical fitness level"
"This experience requires good weather. If it’s canceled due to poor weather, you’ll be offered a different date or a full refund"
"This experience requires a minimum number of travelers. If it’s canceled because the minimum isn’t met, you’ll be offered a different date/experience or a full refund"
"This tour/activity will have a maximum of 7 travelers"