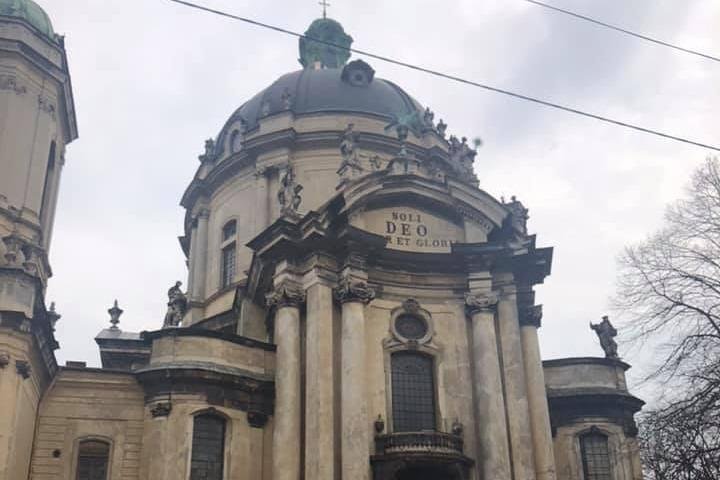 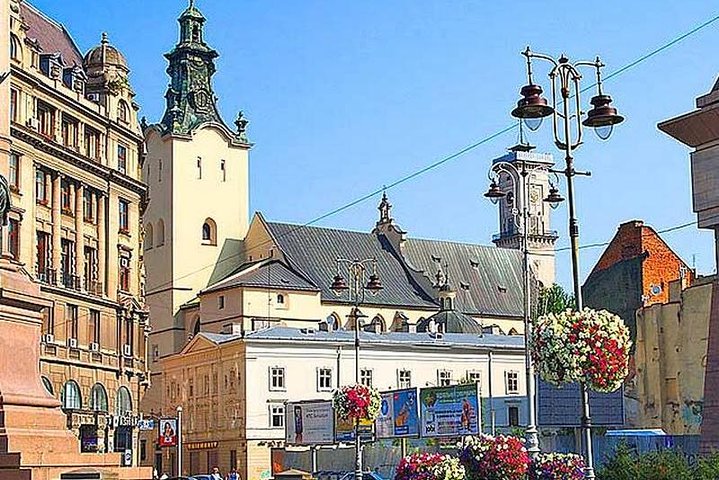 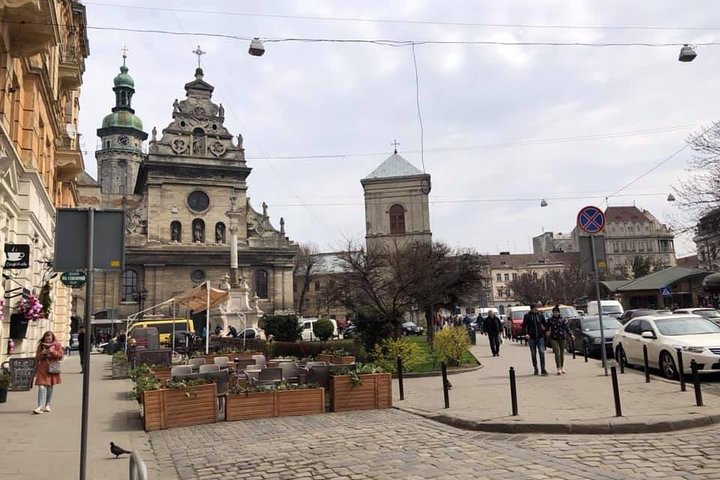 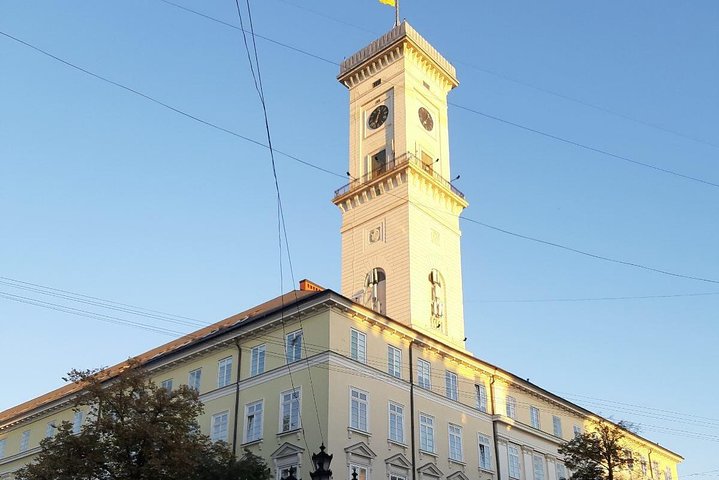 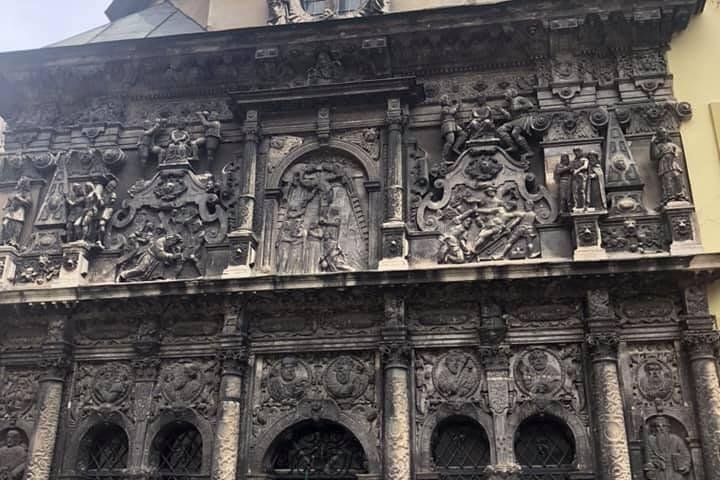 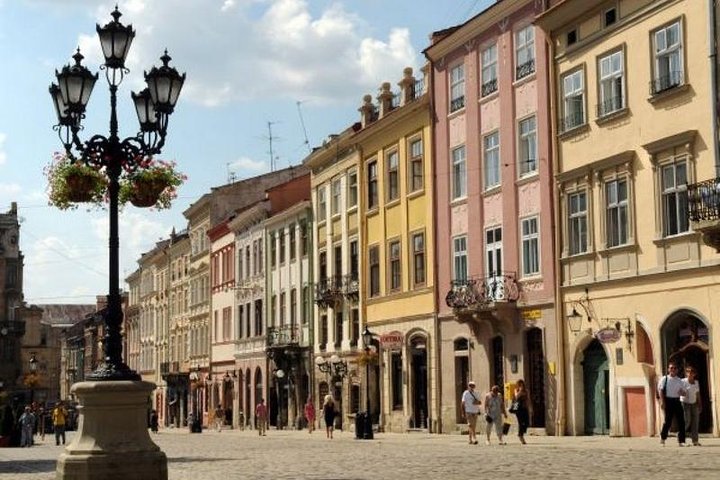 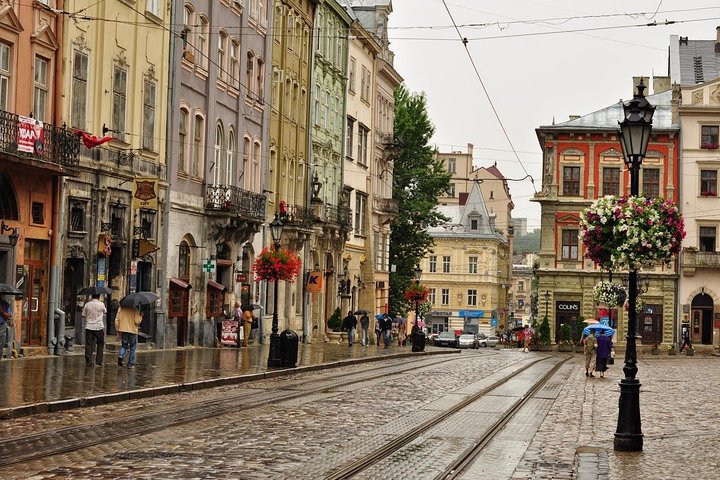 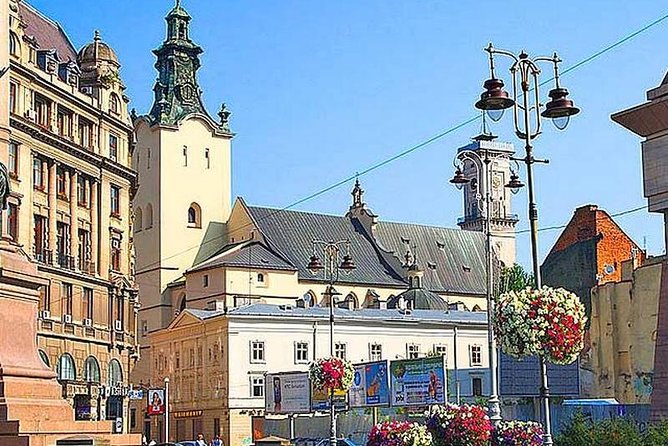 Start exploring Lviv by joining a fabulous 3-day small-group guided tour. “City of Lion”, which is second name of Lviv, has a unique combination of different cultures including Ukrainian, Polish, Jewish, Austrian, German and other. Feel its fantastic amicable atmosphere and get to know better the famous sights of the city!

Pass By: Lviv, Lviv, Lviv Oblast
As you arrive in Lviv, our driver will meet you and transfer you to the hotel. You'll have a free time in Lviv.

No meals included on this day.
Accommodation included: 3 - 5 star hotel

Stop At: Old Town, Lviv Ukraine
UNESCO-listed Lviv Old Town is an architectural pearl, where every building has its story. Enjoy a welcoming atmosphere of ancient city, walking through the cozy cobblestone streets.
Duration: 2 hours

Stop At: Rynok Square, Lviv 79039 Ukraine
The highlight of Lviv Old Town is a famous Rynok Square. Four corners of the square are decorated with fountains with mythological figures of gods. It’s a must-visit place in Lviv.
Duration: 20 minutes

Pass By: Lviv City Hall, Rynok pl. 1, Lviv 79008 Ukraine
An operating Lviv City Council and City Administration are located in this building, in the very heart of Market Square. A beautiful view of the city is opened from the top of the tower.

Pass By: Chapel of the Boim Family, Katedralna pl. 1, Lviv 79008 Ukraine
Take a look at so-called “black pearl” of Lviv Old Town – Chapel of Boim Family, built as a family vault in early 17th century. The walls of the chapel are decorated with scenes from the Bible.

Pass By: Pharmacy Museum, Drukarska vul. 2, Lviv 79008 Ukraine
Visit one of the oldest operating pharmacies in Europe, located on the Market Square. Its foundation dates back to 1735, and it is also known by the name “Pharmacy under the black eagle”.

Stop At: Armenian street, Virmenska Street, Lviv Ukraine
Stroll down one of the most ancient street of Lviv and discover its rich history. Discover such interesting sights as the building, known as “the house of the seasons” and the monument to kerosene lamp inventor.
Duration: 10 minutes

Stop At: Church of St. Andrew, Soborna pl. 3 A, Lviv 79008 Ukraine
Explore an important religious site of Lviv, Church of St. Andrew – a former Bernardine Church. Today it is an active Greek Catholic Church, whose architectural ensemble includes a bell tower and rotunda over the well.
Duration: 15 minutes

Stop At: Monument to Leopold von Sacher-Masoch, Serbska vul. 7, Lviv 79008 Ukraine
Take a picture next to the monument to a legendary figure – Leopold Sacher Masoch, located next to a popular restaurant under the same name. Be sure to put your hand into sculpture’s pocket for an unexpected detail.
Duration: 5 minutes

Pass By: Church of the Jesuits, Teatralna vul. 11 11 Teatralna Street, Lviv 79008 Ukraine
Take a look at an important religious monument of 17th century, built in baroque style and uncover its history.

Stop At: Cathedral of the Assumption of the Blessed Virgin Mary, Katedralna pl. 1, Lviv 79008 Ukraine
Discover an outstanding Latin Cathedral – a monument of architecture of 14th-15th century. It is a Roman Catholic Cathedral, visited by Pope John Paul II in 2001.
Duration: 10 minutes

Pass By: Lviv, Lviv, Lviv Oblast
After breakfast at your hotel and check-out, your driver will take you to the airport or railway station.

Informacion Adicional
"Confirmation will be received within 48 hours of booking, subject to availability"
"Hotel name and address will be informed additionally, after the confirmation of availability"
"Not wheelchair accessible"
"Most travelers can participate"
"Check-in time at the hotel is 2pm, check out time is 12pm"
"This tour/activity will have a maximum of 10 travelers"