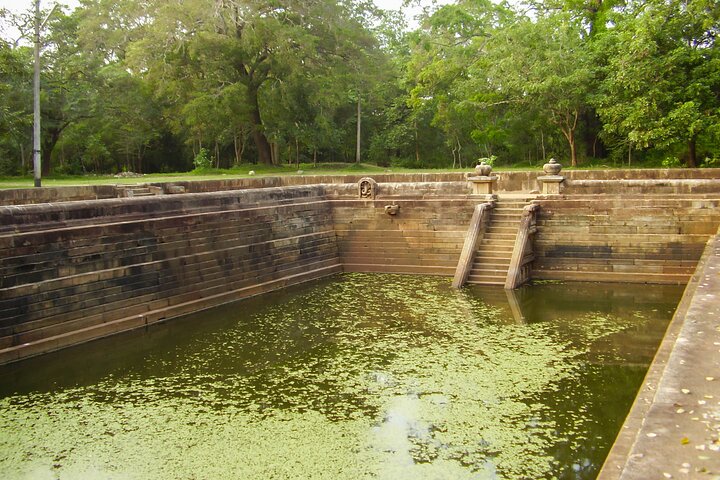 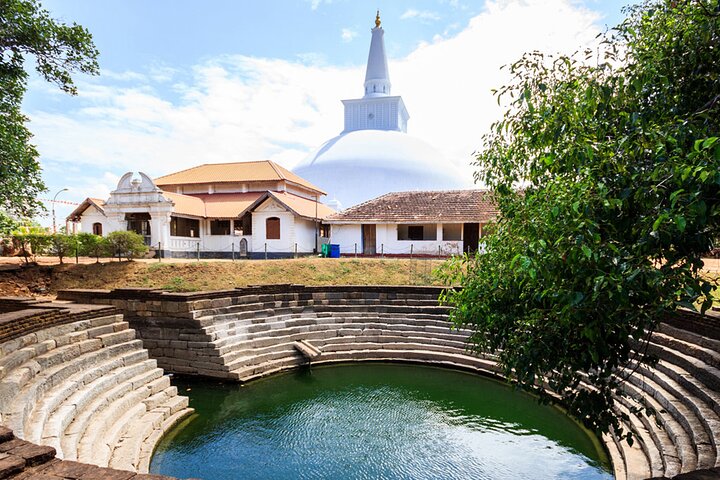 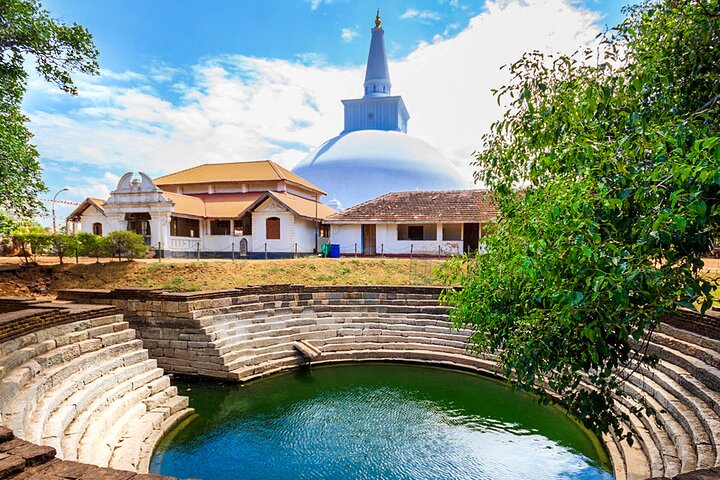 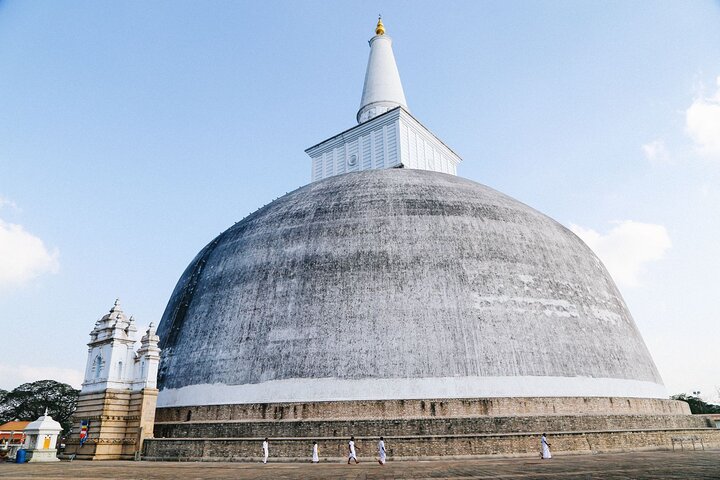 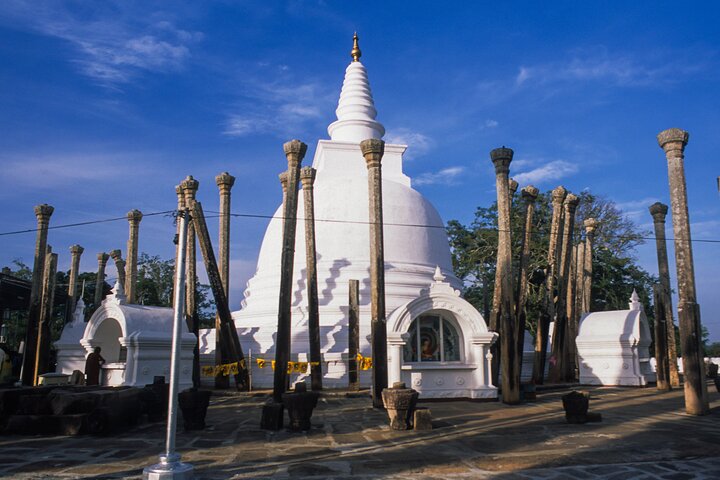 Sacred City of Anuradhapura from Jaffna

(SKU:LK60200700) This memorable tour takes you to see some of the historic highlights of Sri Lanka.Walkthrough the ancient ruined city of Anuradhapura.

Standing at a circumference of 370 feet and a height of 180 feet, Ruwanweliseya, the third largest stupa of Sri Lanka, is the focal point of the Maha Vihara, the first monastery of Sri Lanka. It is believed that a considerable amount of relics of Buddha is enshrined in this glorious stupa, built in replicating the shape of a bubble of water. At the eastern entrance to the stupa is a statue of King Dutugamunu. According to the records made by Fa Hsien, the Chinese Buddhist monk, who toured Sri Lanka in the 5th century CE, Maha Vihara monastery housed no less than 3000 Buddhist monks.

Since the death of King Dutugamunu, “The Hero of the Nation”, the great stupa had been renovated by a succession of Sinhalese kings till King Nissanka Malla (1187-1196 AC). By the 19th century, Anuradhapura, once the greatest monastic city of the world, also named Anurogrammon, by the Greek cartographer Claudius Ptolemy (90-168 AD) was deserted; Ruwanweliseya was in ruins.
It is hard to believe – but there is no shadow of doubt at all –that this small tree with limbs so slender that they must be supported on iron crutches,is the oldest historically authenticated tree in the world (2,250 years).

The great ancient Sinhalese Buddhist monuments of Anuradhapura are clustered around this Peepal tree (ficus religious) called Sri Maha Bodhi, a sapling of the Peepal Tree at Buddha Gaya, Northern India in whose shelter Gautama Buddha attained supreme enlightenment.The sapling was brought to Sri Lanka by Buddhist nun Sanghamitta,the daughter of King Asoka of India during the 3rd Century B.C. To the north of the well protected and well adorned tree are three great monasteries:the Mahavihara, the Abhayagiri and the Jetavana.

Abhayagiri Monastery spreading over an area of 200 hectares,was founded by King Valagamba also known by Vattagamini Abhaya (109 BC-89-77 BC) following his ascent to the throne for the second time,having the Dravidian invaders put to sword and fire. The monastery was built following the destruction of the Jain hermitage,whose ascetic Giri had taunted King Valagamaba while he was fleeing from invaders from Southern India 14 years back.The monastery was donated to Buddhist monk Thera Mahatissa as a token of gratitude for the moral and material support extended to the king,at a time of adversity,in exile building an army to regain his kingdom.The main stupa at Abhayagiri Monastery ,Abhayagiri Stupa was built over a footprint of Buddha.The Bo tree at the monastery is an off-shoot of the Sri Maha Bodhi tree also at Anuradhapura. Standing at 370 ft in height,when it was first built, Abhayagiri Dagoba was the second tallest dagoba in Sri Lanka.

Isurumuniya Temple,built by King Devanampiyatissa,is located close to the Royal Pleasure Gardens by the side of Tisaweva (Tissa rainwater reservoir).The Isurumuniya temple,built partly into a cave with a lovely pool in the front and with a boulder forming the rear wall,is a treasure-trove of exquisitely carved stone sculptures.The rock face bordering the rear of the pond is well adorned with a couple of exquisite rock carvings.One is of a herd of Elephants giving the impression of their playful antics in the pond.The sculpture has also captured the majesty of the leader elephant of the herd.The other one is of a noble horseman and his horse.Also at the temple is a celebrated sculpture on a slab of granite called ‘Isurumuniya lovers’.This has now been shifted to the Isurumuni Archaeological Museum.The lovers are identified as King Dutugamunu’s son Saliya and his non-royal consort Asokamala,the ultimate lissom women with matchless beauty.

Thuparama dagoba, 20m in height and 60ft in diameter, one of the smallest of ancient stupas was built by King Devanampiya Tissa in the third century BC. Thuparama dagoba is believed to enshrine the collar bone relic of Buddha. By the seventh century, the stupa was renovated by King Aggabodhi the second in the 7th century.The graceful monolithic pillars surrounding it once upheld a circular roof making the shrine a Vata Dage (Circular – Relic – house) a characteristically Sinhalese architectural feature.The roof doesn’t exist today. Originally constructed in the ancient architectural tradition of a “paddy – heap” shape, its present “bell” shape dates to renovation in the 1862.To the south-east of Thuparama dagoba are the ruins of a hospital as it is evident by the presence of an intact medicinal trough, an oil bath cut into a slab of stone.

Informacion Adicional
"Confirmation will be received at time of booking"
"Not wheelchair accessible"
"Near public transportation"
"Most travelers can participate"
"This experience requires good weather. If it’s canceled due to poor weather, you’ll be offered a different date or a full refund"
"This experience requires a minimum number of travelers. If it’s canceled because the minimum isn’t met, you’ll be offered a different date/experience or a full refund"
"This is a private tour/activity. Only your group will participate"
"Face masks required for travelers in public areas"
"Face masks required for guides in public areas"
"Face masks provided for travelers"
"Hand sanitizer available to travelers and staff"
"Social distancing enforced throughout experience"
"Gear/equipment sanitized between use"
"Transportation vehicles regularly sanitized"
"Guides required to regularly wash hands"
"Regular temperature checks for staff"
"Temperature checks for travelers upon arrival"
"Paid stay-at-home policy for staff with symptoms"
"Contactless payments for gratuities and add-ons"