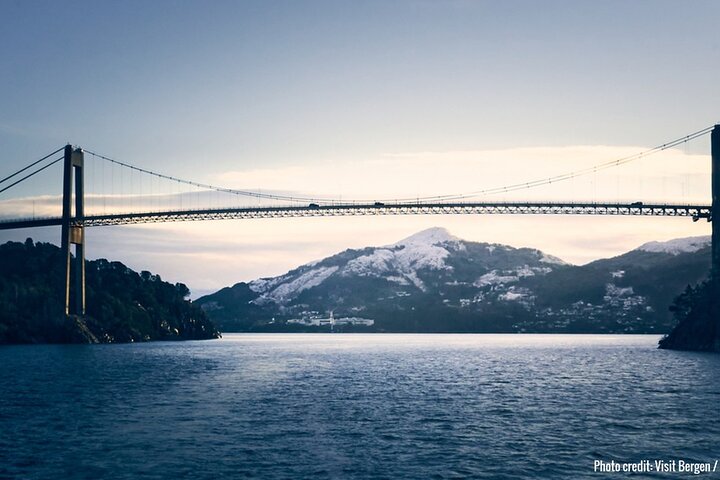 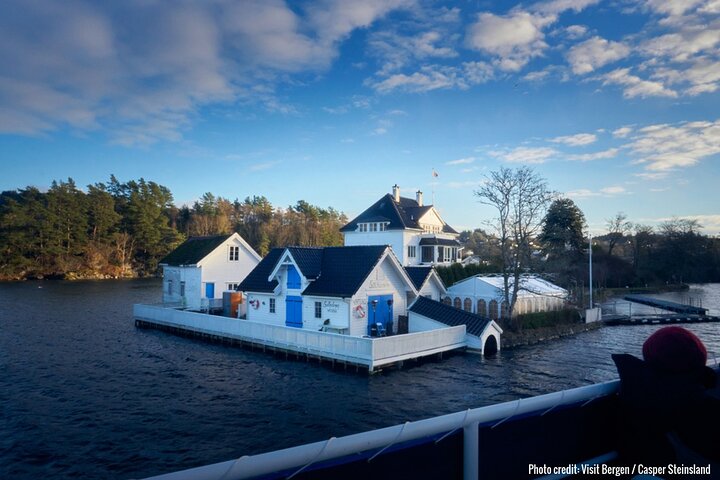 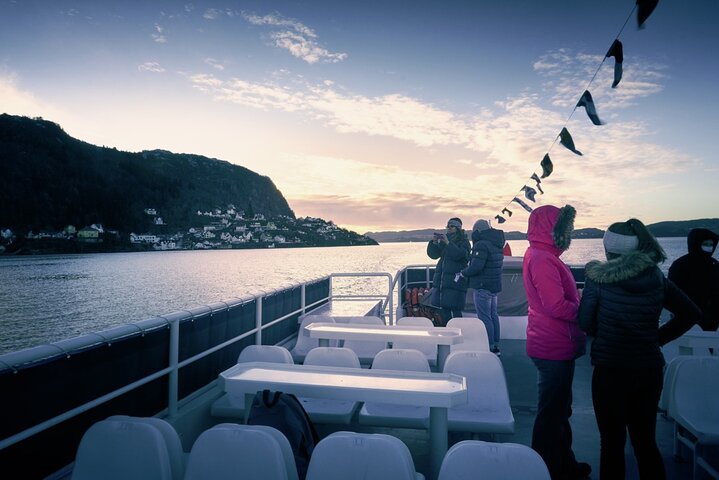 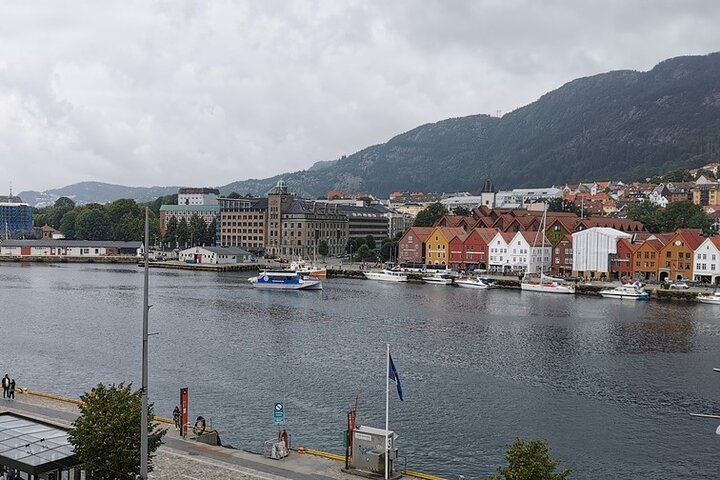 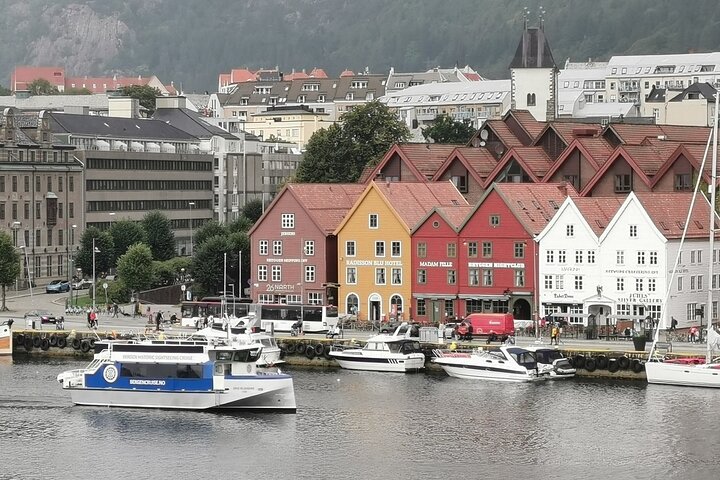 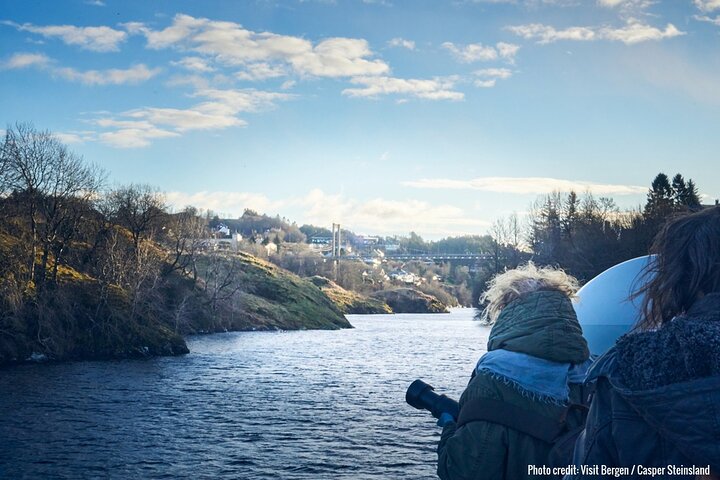 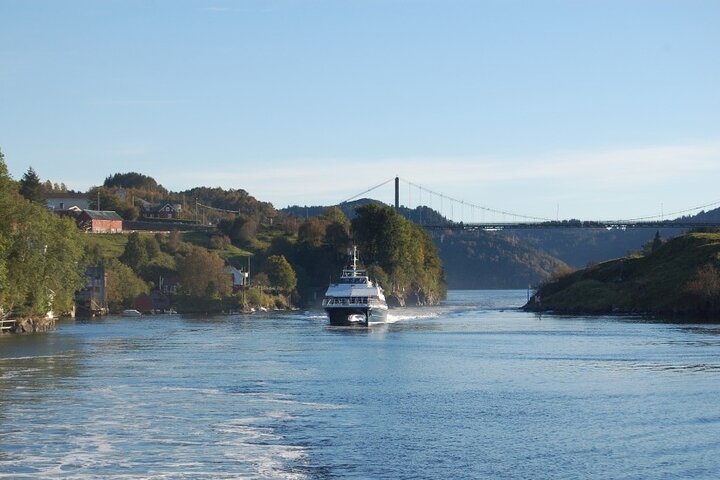 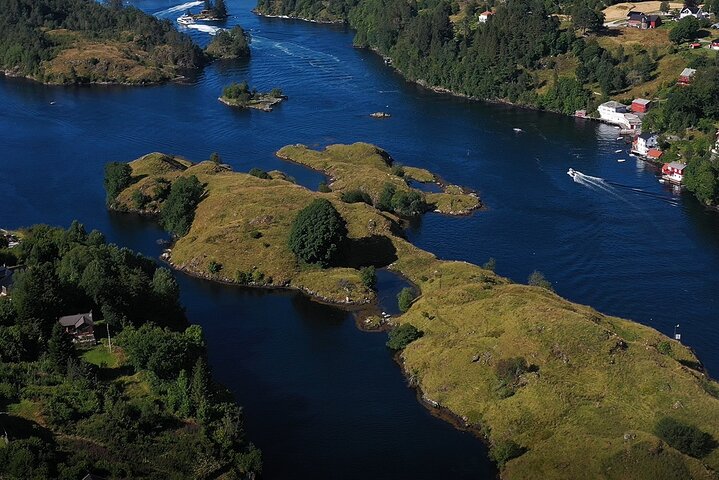 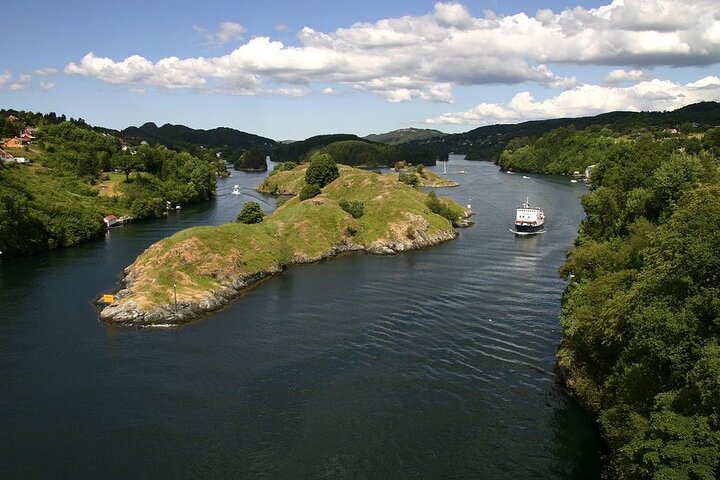 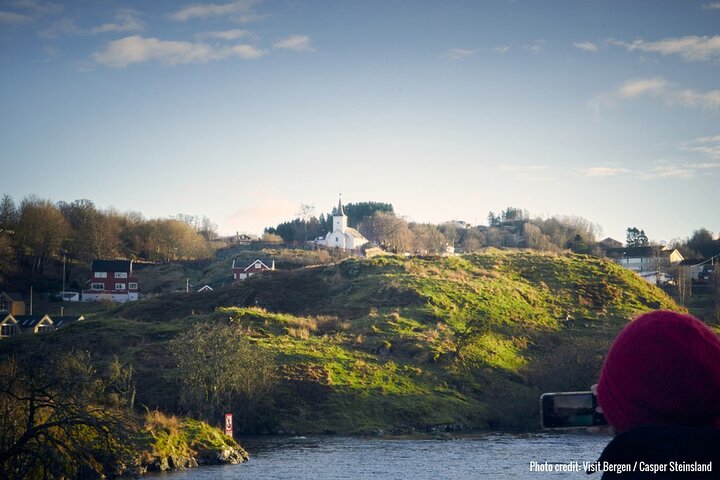 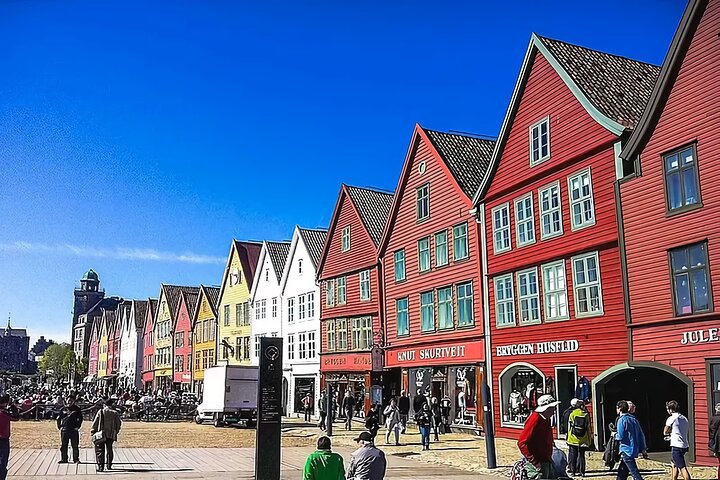 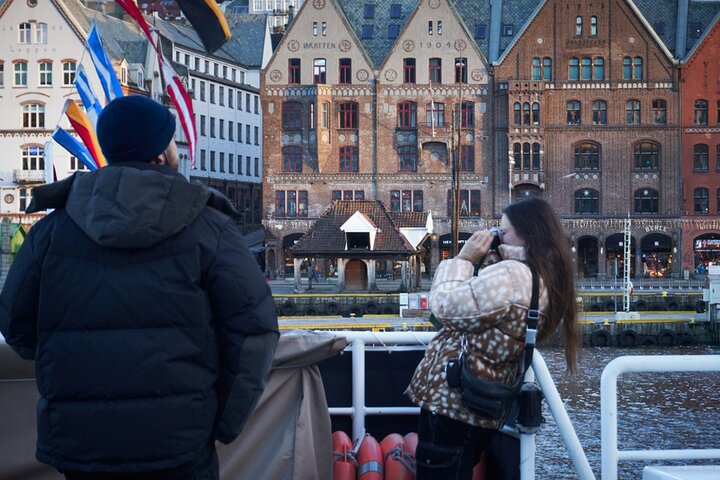 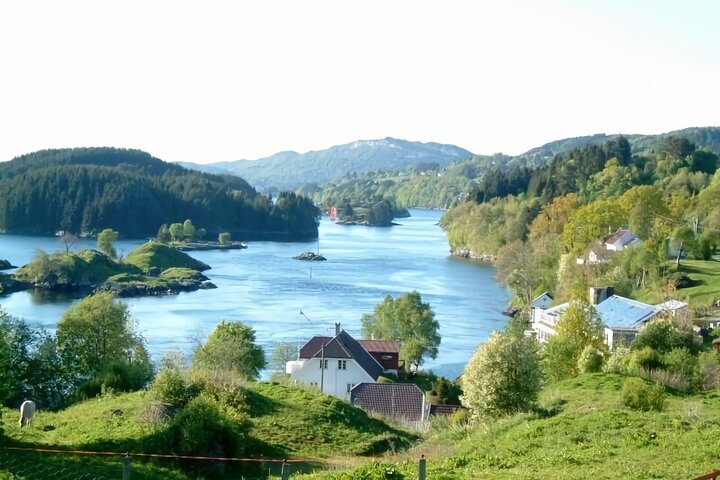 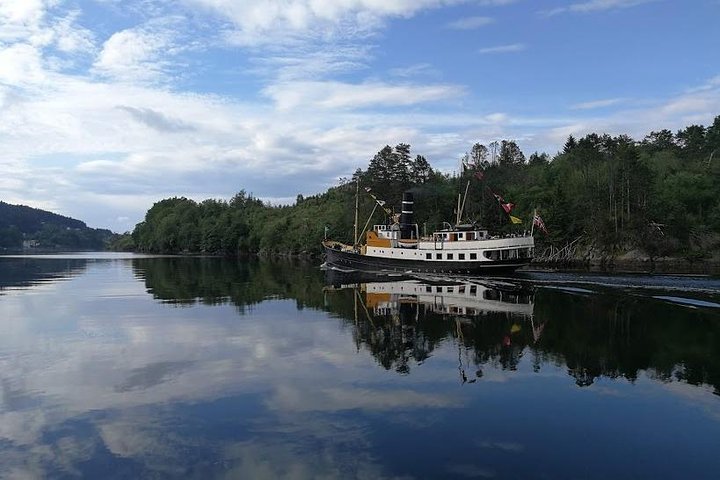 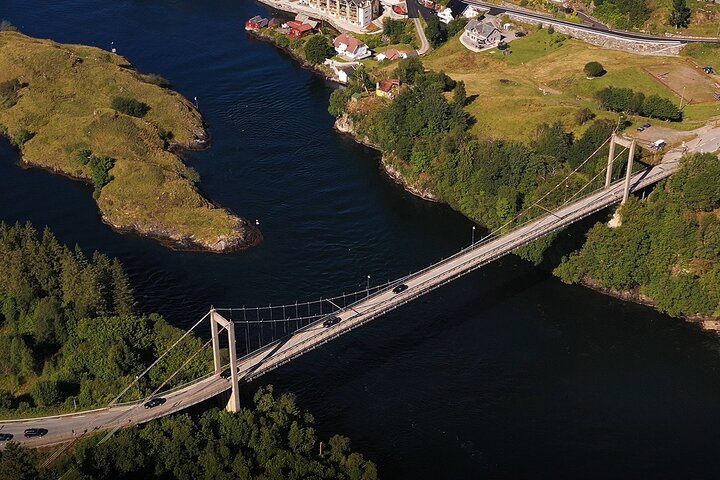 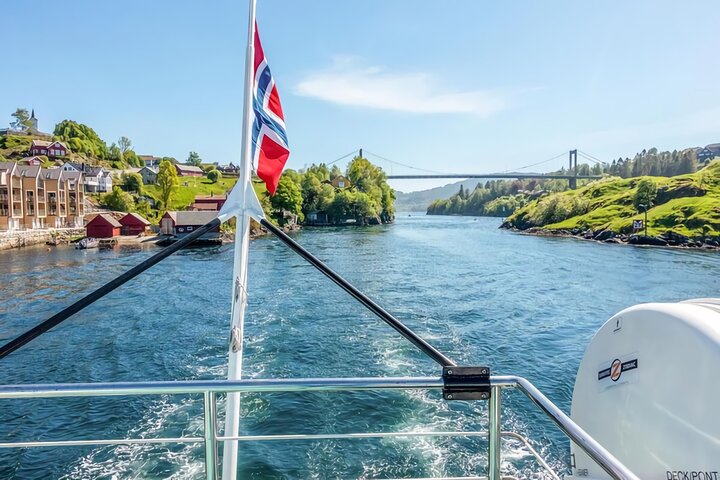 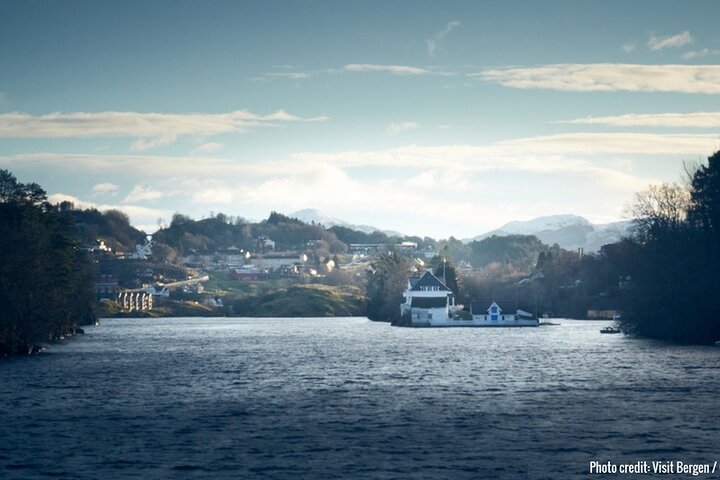 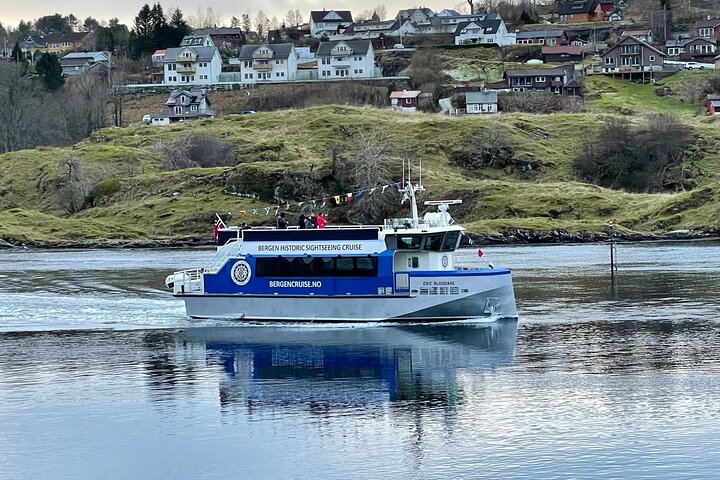 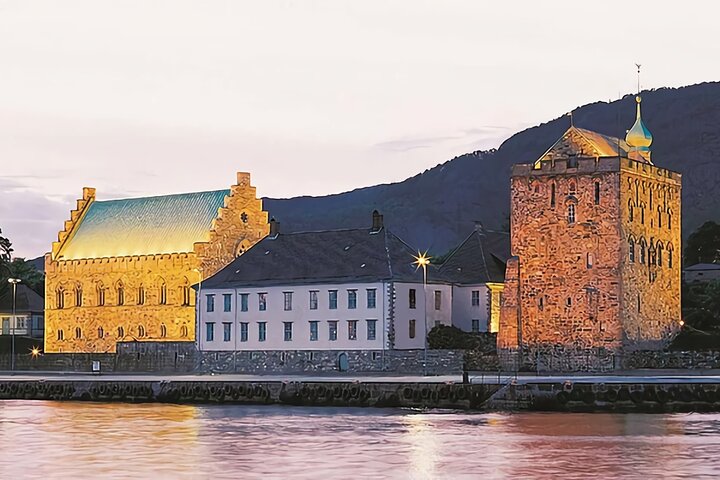 Enjoy a 3-hour fjord cruise from Bergen to the spectacular Alversund Streams, and experience the magnificent and varied fjord landscapes in the Nordhordland region. This round-trip cruise departs all year from the Børshopen pier in the city center.

​When sailing out from Bergen's famous Fish Market you will have a great view to some of the oldest and most relevant historical sites in the city, including the medieval fortress Bergenhus, St Mary's church and the colorful Bryggen Hanseatic wharf, which is on UNESCO’s world heritage list.

From there, we sail through beautiful Western Norwegian scenery in the City Fjord, Salhus Fjord and Kverna Fjord towards the stunning Alversund Streams. The captain safely steers the boat through narrow sounds, deep fjords, a maze of islands and the powerful currents of the narrow Alversund channel.

Colorful Bryggen is one of Bergen's and Norway's main attractions. The very first buildings in Bergen were situated at Bryggen, which has been a vibrant and important area of the city for many centuries. Bryggen is now part of our common heritage and has a place on UNESCO’s World Heritage List, and the city of Bergen is a designated World Heritage City. The world heritage site consists of the old Hanseatic wharf and buildings, and is one of the best known urban areas from the Middle Ages in all of Norway.

Bergenhus Fortress and Royal Castle is one of the oldest and best preserved stone fortifications in Norway, and it contains buildings dating back as far as 1240. In medieval times the area was known as Holmen and contained the royal recidence, as well as a cathedral, several churches, the bishop's residence and a Dominican monastery. Excavations have revealed foundations of buildings believed to date back to before 1100.

Byfjorden (the Cityfjord), with its water depths ranging from about 5 to 350 meters frames the city of Bergen along its waterfront. It is also a natural landmark, visible from much of the city as it is situated between the seven mountains that encircle Bergen. The 15-kilometre (9.3 mi) long fjord separates the island of Askøy from the mainland Bergen Peninsula, passing right north of the city of Bergen on the mainland.

The 4 kilometer long and up to 500 meter deep Salhusfjord is located between Bergen and Alver Municipality. The fjord is crossed by the Nordhordland Bridge, and it takes it's name from the village area of Salhus. In the early 12th century there was an inn located there, known at the time as a sáluhus. It acted as a transport hub for Nordhordland, and was a small market town. It was one of the first industrialized places when a hosiery manufacturer was established here in 1859.

The Nordhordland Bridge crosses the Salhusfjord at a point where it is around 1300 meter wide and 500 meter deep. The bridge is a pontoon and cable-stayed bridge with one tower. Due to the depth of the sea beneath the bridge, lateral anchorage between the abutments at each end was not possible. To accommodate this unusual condition, there was a great deal of additional analysis in design of the footings at each end of the bridge. The free-floating bridge has the longest laterally-unsupported span in the world

Kvernafjorden is a small fjord in Alver municipality. The fjord is located between Radfjorden, which is part of the same fjord system, and Haglsundet, which goes south to where Salhusfjorden meets Osterfjorden.

Alversund Streams, a beautiful and narrow strait with strong tidal currents. The tidal whirlpools have through history fascinated and challenged the people who had to pass them on the important trading route in and out of Bergen.