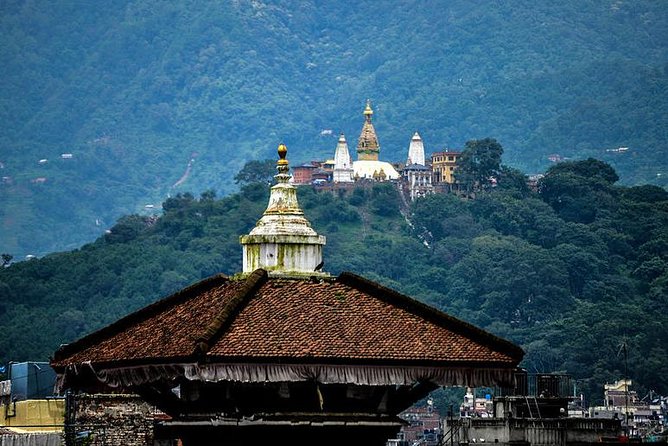 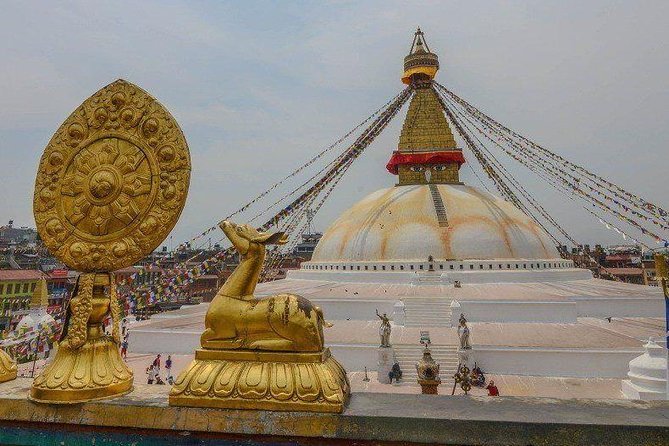 When you make your way to Nepal, Kathmandu will be the first land you’ll step on. Along with being the hustling administrative capital of Nepal, Kathmandu is packed with antique-inherited ethos from centuries ago. Although the rising skyscrapers have engulfed the valley floor, you’ll find brilliantly sculptured monuments in every nook and corner of the city. While some of these stand in an alley as an ordinary old fella to the locals, some covering wider zones have made themselves into the list of UNESCO World Heritage Sites. Kathmandu Day Tour covers an amble excursion to four out of seven world heritage sites that Kathmandu fosters: Patan Durbar Square, Swyambhunath Stupa, Boudhanath Stupa and Pashupatinath Temple.

What to See at Pashupatinath Temple

Pashupati Temple stands in the center of the town of Deopatan, in the middle of an open courtyard. It is a square, two-tiered pagoda temple built on a single-tier plinth, and it stands 23.6 meters above the ground. Richly ornamented gilt and silver-plated doors are on all sides.

On both sides of each door are niches of various sizes containing gold-painted images of guardian deities. Inside the temple itself is a narrow ambulatory around the sanctum. The sanctum contains a one-meter high linga with four faces (chaturmukha) representing Pashupati, as well as images of Vishnu, Surya, Devi and Ganesh.

The priests of Pashaputinath are called Bhattas and the chief priest is called Mool Bhatt or Raval. The chief priest is answerable only to the King of Nepal and reports to him on temple matters on a periodic basis.

The struts under the roofs, dating from the late 17th century, are decorated with wood carvings of members of Shiva's family such as Parvati, Ganesh, Kumar or the Yoginis, as well as Hanuman, Rama, Sita, Lakshman and other gods and goddesses from the Ramayana.

Pashaputi Temple's extensive grounds include many other old and important temples, shrines and statues. South of the temple, for instance, is Chadeshvar, an inscribed Licchavi linga from the 7th century, and north of the temple is a 9th-century temple of Brahma. On the south side of Pashupati temple is the Dharmashila, a stone where sacred oaths are taken, and pillars with statues of various Shah kings.

In the northeast corner of the temple courtyard is the small pagoda temple of Vasuki, the King of the Nagas. Vasuki has the form of a Naga (mythical snake) from the waist upwards, while the lower parts are an intricate tangle of snakes' bodies. According to local belief, Vasuki took up residence here in order to protect Pashupati. One can often see devotees circumambulating and worshipping Vasuki before entering the main sanctum.

The Bagmati River, which runs next to Pashaputinath Temple, has highly sacred properties. Thus the banks are lined with many ghats (bathing spots) for use by pilgrims. Renovating or furnishing these sites has always been regarded as meritorious.

Arya Ghat, dating from the early 1900s, is of special importance because it is the only place where lustral water for Pashupatinath Temple can be obtained and it is where members of the royal family are cremated. The main cremation site is Bhasmeshvar Ghat, which is the most-used cremation site in the Kathmandu Valley. The preferred bathing spot for women is the Gauri Ghat, to the north.

Across the Bagmati River are 15 votive shrines, the Pandra Shivalaya, which were built to enshrine lingas in memory of deceased persons between 1859 and 1869.

Climb the full 365 steps to the top - take a breather on the way up to enjoy the small stupas, monkeys and watch vendors prices go up!

Circle the stupa at the very top (clockwise) Do visit the small temples and shrines around the main stupa.

If you have time walk down the stairs behind the stupa to the world peace pond. There are sometimes some local artisans along these steps.

To the rear is a Buddha park while to the south is a natural history museum.

There's also a monastery near the top behind the peace pond. Beware of the monkeys - they steal food, shiny objects and will take things from your hand or bag!

You start your journey from the left side of patan watching the temples first and then you move deeper towards the city.the main attractions you will see are as follows:

1)Chyasin Dewal: The very first temple you will come across is Chyasin Dewal, one of two Krishna temples in the square. The attractive octagonal solid granite temple was built in 1637-47 by Siddhi Narasimha and is worthy of a walk around as it is one of the square’s best examples of solid stone temples. Do note the two stone lion guardians at the bottom of the platform steps leading to the first floor. Inside here is the statue to Krishna. Two stone floors above have unique balconies.

2)Taleju Bell: Just north of the Krishna Temple is a huge cast-iron Taleju Bell. Mounted between two stone pillars it was erected in 1736-37 and rumored to terrify the king’s enemies when it was rung. More likely it was used to signal incoming invaders and later city announcements.

3)Hari Shankar Temple (destroyed in earthquake): Built in 1706 it was dedicated to Shankar Narayan deity who is half Shiva and half Vishnu. In front were two heavy stone elephant guardians who still stand today.

4) Jagan Narayan Temple (destroyed in earthquake): The second major temple to collapse in the 2015 earthquake was once the oldest in the square and was built in 1566. It used to be used for political speeches.

5)Krishna Mandir: One of the most remarkable stone temples ever built only took six and a half short years to construct it in 1637. This elaborate temple is dedicated to Krishna and worth some minutes to enjoy. Opposite it is a beautiful Garuda mounted on a column.

6)Vishwanath temple: Vishwanath is a manifestation of Shiva. The temple was built between 1676- 78 during a time when King Siddhi Narsingh witnessed the moguls destroy the Vishwanath Temple in Banaras. Today you can view two stone riders on elephants guarding it.

7)Bhimsen Mandir Temple: Our last temple on the left hand-side moving up Durbar Square was built in 1680 at a time when all three kingdoms in Nepal were at peace. It’s dedicated to the Newari god of traders Bhimsen. There's a fire pit opposite it for rituals and a tall pillar. Crossing over to the other side of the street you'll see a large hiti or sunken water source known as Manga Hiti. Though damaged it still functions today though without its gates.

8)Keshab Narayan Chowk/ Patan Museum: Running along the wall of the old palace is an ornate doorway. It leads to part of Patan Museum. If you enter it will also give you access to Mul Chowk and Sundari Chowk.

10)Mul Chowk: Damaged during the earthquake renovation is nearly complete. Today it's often used as a restoration area by artisans. The courtyard was built in 1666 and is known as the heart of Durbar Square. It is now quite plain aside from the gilded figures straight ahead Ganga and Jamuna, goddesses of the river system that runs from the Himalaya and the copper shrine in the middle. Two decades ago the courtyard was richly decorated in wood work until several thefts left it bare. Continue through to Sundari Chowk.

11)Sundari Chowk: The centerpiece attraction is without doubt the stunning Tushahiti step-well in the center of the courtyard. Built in 1647 by King Siddhinarasimha Malla for ritual ablutions.

12)Bhandarkhal Tank Don't leave Sundari Chowk without taking a quick look to the rear where the fully restored Bhandarkhal tank or pond now lies. Built in 1667 it was once Durbar Squares main supply of water.

What to See at Boudhanath Stupa

From above, Bodnath Stupa looks like a giant mandala, or diagram of the Buddhist cosmos. And as in all Tibetan mandalas, four of the Dhyani Buddhas mark the cardinal points, with the fifth, Vairocana, enshrined in the center (in the white hemisphere of the stupa). The five Buddhas also personify the five elements (earth, water, fire, air and ether), which are represented in the stupa's architecture.

There are other symbolic numbers here as well: the nine levels of Boudhanath Stupa represent the mythical Mt. Meru, center of the cosmos; and the 13 rings from the base to the pinnacle symbolize the path to enlightenment, or "Bodhi" — hence the stupa's name.

The base of the stupa consists of three large platforms, decreasing in size. These platforms symbolize Earth, and here you can look out at the mountains while listening to the chants of the devout doing kora, walking around the stupa praying.

Next come two circular plinths supporting the hemisphere of the stupa, symbolizing water. As at Swayabunath, Bodnath is topped with a square tower bearing the omnipresent Buddha eyes on all four sides.

Instead of a nose is a question-mark-type symbol that is actually the Nepali character for the number 1, symbolizing unity and the one way to reach enlightenment—through the Buddha's teachings. Above this is the third eye, symbolizing the wisdom of the Buddha.

The square tower is topped by a pyramid with 13 steps, representing the ladder to enlightenment. The triangular shape is the abstract form for the element of fire. At the top of the tower is a gilded canopy, the embodiment of air, with above it a gilded spire, symbolic of ether and the Buddha Vairocana. Prayer flags tied to the stupa flutter in the wind, carrying mantras and prayers heavenward.

Hora de Inicio: 9:30 AM
Duración: 6 Hours
Lugar de comienzo: Traveler pickup is offered
we pickup from every hotel or any other places.