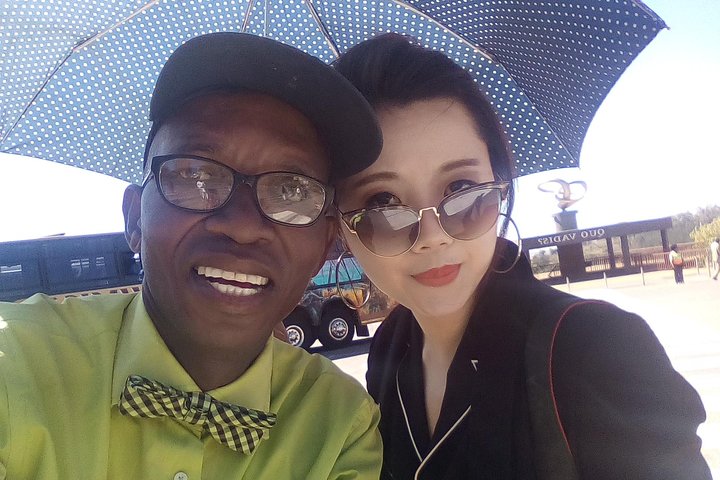 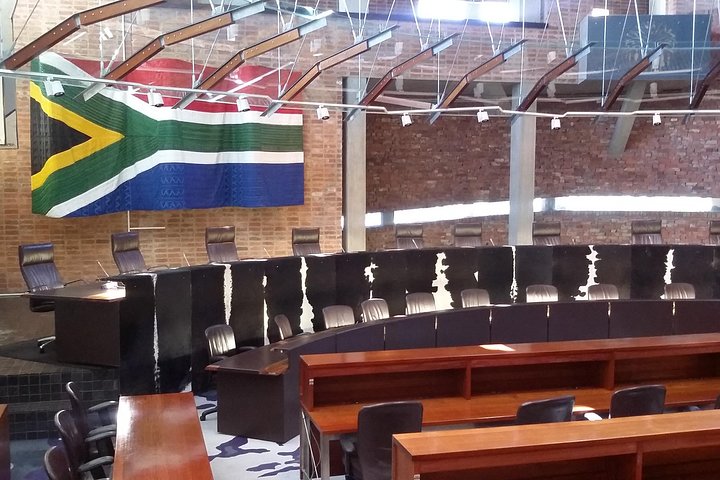 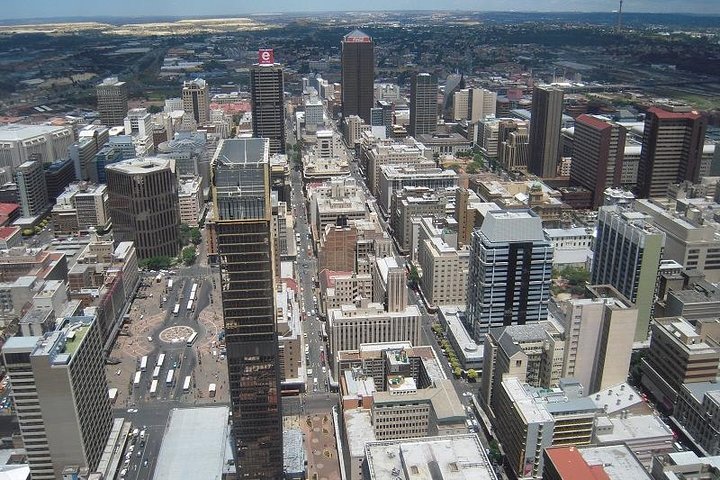 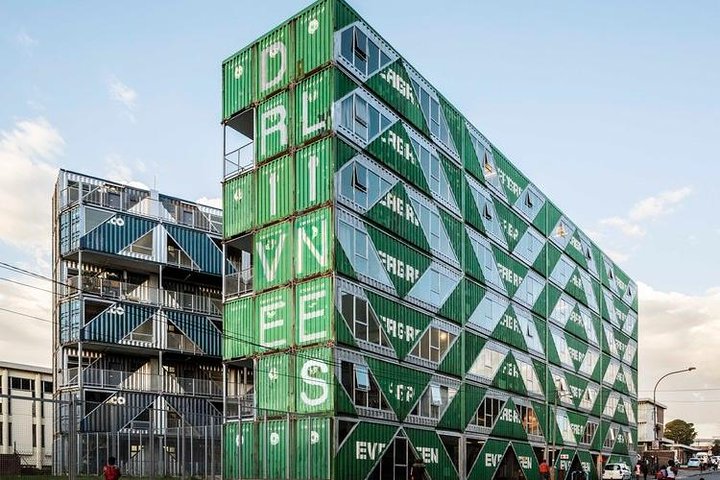 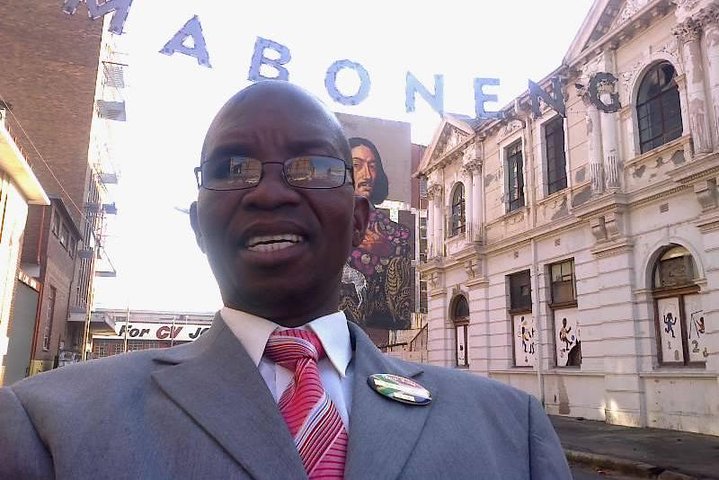 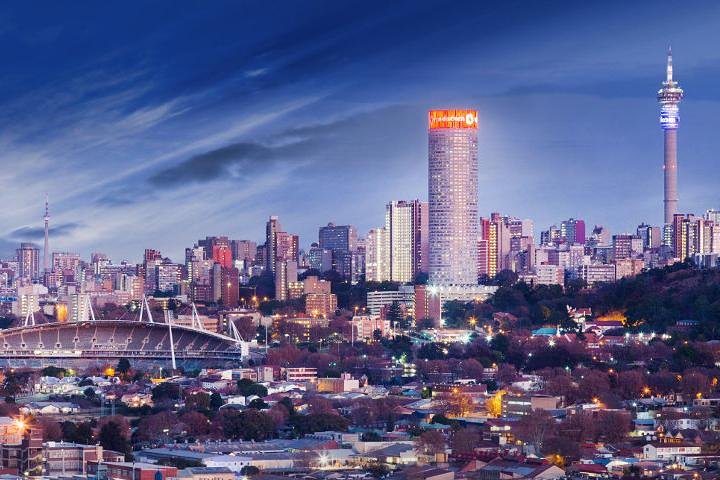 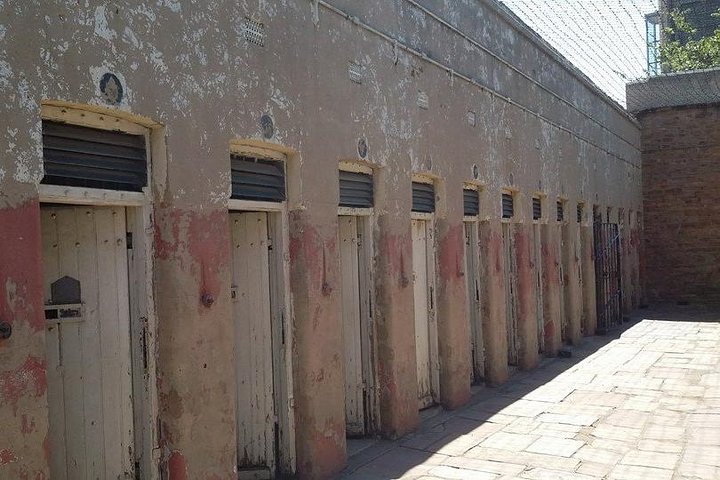 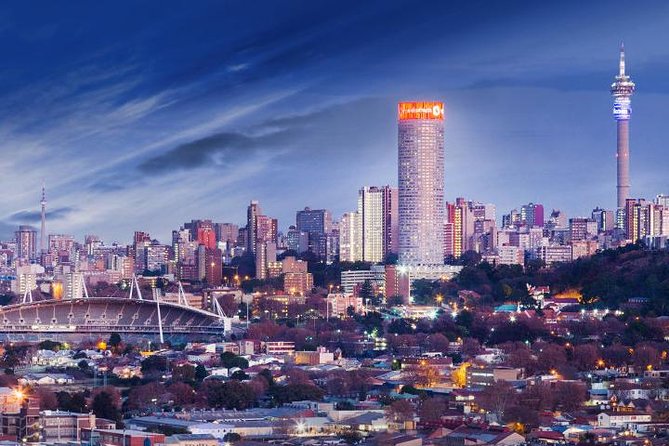 Johannesburg(New York of Africa) in South Africa is the second largest city in Africa, in 2016 there were 4.94 million people living in the City of Johannesburg. Joburg, or Jozi as some prefer to call it, offers visitors an experience as unique and diverse as the city itself. Whether you are on business, in search of a cultural encounter, an adrenaline rush or simply want to relax and unwind for a few days, the city of Johannesburg has everything you’re looking for and more!

History. Settlement of Johannesburg began in 1886, when gold was discovered in the Witwatersrand by an Australian prospector named George Harrison. The discovery spurred a feverish gold rush as fortune hunters from all over the world descended on the area.

The bird’s-eye view of Johannesburg, the 50-storey Carlton Centre is the place to be

a panoramic view of the City of Gold from the Top of Africa, as the topmost floor of the building is known: 360 degrees of dense cityscape and outwards towards the countryside and beyond.

In the 1980s when Standard Bank was preparing the foundations for its new headquarters in the Johannesburg city centre, builders uncovered the entrance to a long-forgotten mine stope that dates back to the city's very earliest gold-mining days.

During the completion of the building the mine stope was preserved and it is now open daily to visitors.

The stope is named for Ignatius Phillip Ferreira, a farmer, soldier and prospector who left his hometown of Grahamstown in the Eastern Cape to join the Gauteng gold rush in 1886. He founded one of the area's very first mining camps in July 1886, and just three months later struck gold.

Constitution Hill represents South Africa’s dark past and its bright post-apartheid future. Johannesburg’s most notorious historic prisons (all of them now museums) sit side by side with the home of the Constitutional Court, a symbol of South Africa’s triumphant democracy. The site is located on the ridge between two city neighbourhoods, Hillbrow and Braamfontein, overlooking central Johannesburg....

Before Constitutional Hill opened its doors as a museum in 2004, the precinct housed a collection of notorious prisons which included the Old Fort, a high-security prison built in the 1890s to house prisoners of war during the Anglo-Boer Wars (1899-1902), the Number Four prison block, a so-called “Native Prison”, and the Women’s Gaol.

During the apartheid era the prison complex became a detention centre for political dissidents, striking mineworkers, those deemed “anti-establishment” and those who simply violated the inhuman pass laws of the time.

Many ordinary and famous people were incarcerated here during its years as a prison including former president Nelson Mandela and passive resistance leader Mahatma Gandhi, who were both imprisoned for their pro-democracy activism.

Entrepreneur Jonathan Liebmann bought up dozens of rundown industrial warehouses and factories on the eastern edge of the inner­ city and set about transforming them. He was inspired by his travels to other cities where he had enjoyed the vibrancy of 24/7 urban life

The name Maboneng is a Sotho word meaning “place of light”, and the growing precinct aims to transform an area that was once blighted by urban decay and crime into a safe, happening and inspiring place to live, work and play.

Frequently compared with trendy, rejuvenated neighbourhoods such as London’s Shoreditch or New York’s Brooklyn, this pioneering precinct draws the inner-city public, as well as the chic, outgoing and party­loving crowds of the city’s northern suburbs.

Market on Main is the Sunday heartbeat of Maboneng, and food and design are centre stage at this happening weekly market. There is a wide selection of gourmet street food to enjoy, lots of craft beers courtesy of the on­-site Smack! Republic Brewing Co, and rails stuffed with vintage fashion and Afro-chic accessories upstairs, plus salsa dancing on the rooftop. The perfect place from which to launch your exploration of the neighbourhood, the atmosphere here is addictive.

Populated by artists, designers and creative thinkers, Maboneng is a fantastic place to enjoy the city's cultural scene. Start with a visit to Arts on Main, one of Maboneng's first buildings, which is home to a number of artist studios and small galleries.

World­-renowned South African artist William Kentridge was one of the first tenants to buy a space in the Arts on Main building, while other organisations such as the Goethe Institute and local print studio David Krut Projects also have spaces here (the David Krut Bookstore is a must for its wide-ranging collection of artist and art books and books about Johannesburg).

In the early 20th century, the area was originally used primarily for brick making since the land was rich in clay. Due to its easy access to Johannesburg’s railway lines, Newtown became a commercial and trading hub as banks, brick companies, breweries and fisheries were established in the area.

The district has a politically turbulent past and, due to its multiracial diversity, it was the scene of some of the first forced removals in Gauteng implemented by the apartheid government

Strategic regeneration projects in downtown Johannesburg have facilitated the development of Newtown as a tourist attraction, residential zone and cultural area.

Strategic regeneration projects in downtown Johannesburg have facilitated the development of Newtown as a tourist attraction, residential zone and cultural area.The bridge, which spans the railway tracks which separate the Newtown and Braamfontein neighbourhoods in the Johannesburg city centre took 18 months to build and was completed in 2003. It is the largest cable-stayed bridge in southern Africa

Designed by leading architectural firm Dissing and Weitling, the bridge was specially designed to be lightweight – a combination of structural steel and concrete composite deck ensures that it is as light as possible while offering stability and strength. The construction of the bridge was part of a larger city project to rejuvenate and modernise the inner city and inspire both local and foreign visitors to the city, while also providing an easy, convenient and safe way for residents to travel between the two districts on foot or by car. Some of the trendiest places to visit in Johannesburg can be found in Newtown and Braamfontein.

On the square you’ll also find the Sandton Library as well as the Auto & General Theatre on the Square, one of the leading theatres in Johannesburg and the venue for major drama, comedy and musical productions.

The square also has a large mall which goes by the same name and boasts dozens of high street and designer shops such as the Hamleys toy store, Forever 21, Browns Jewellers, Presidential Shirts and Luminance, a South African department store selling the most luxurious African fashion and decor brands