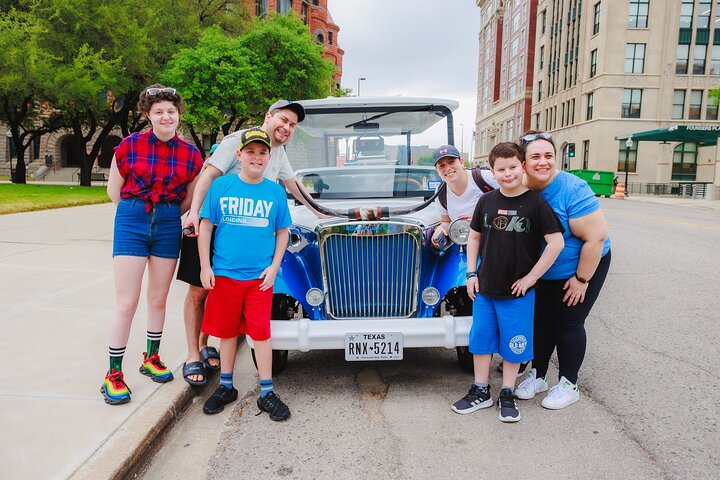 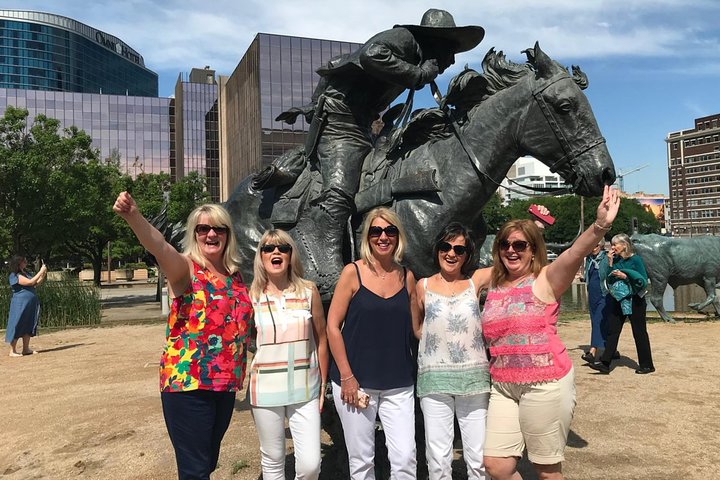 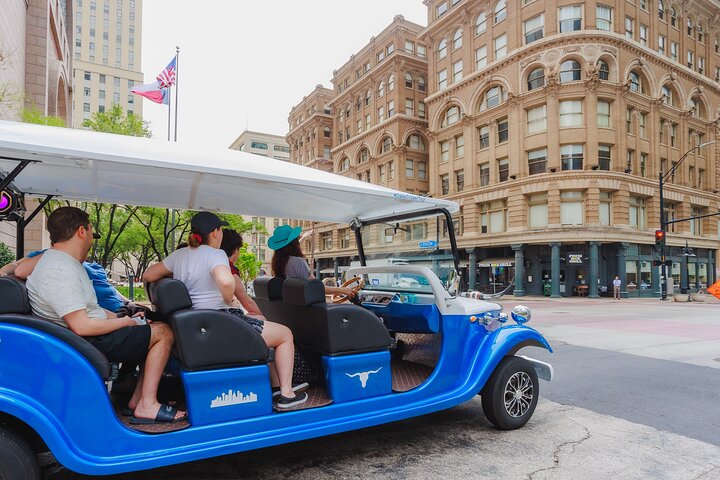 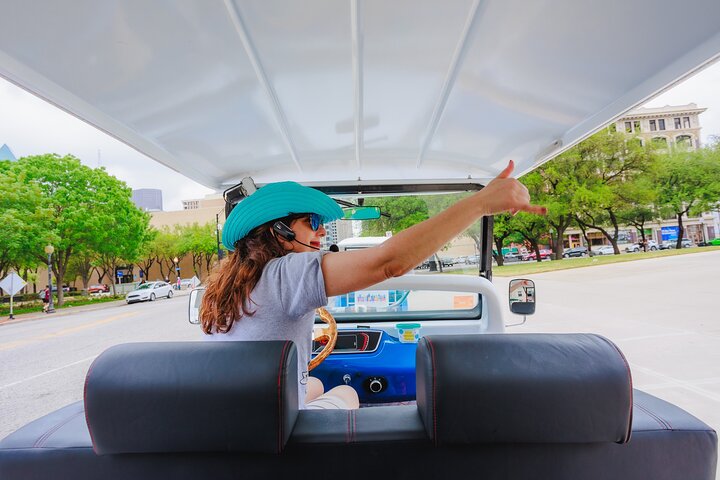 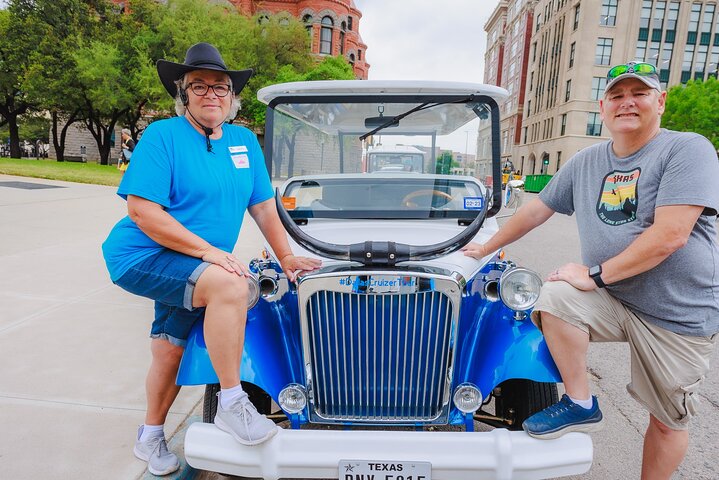 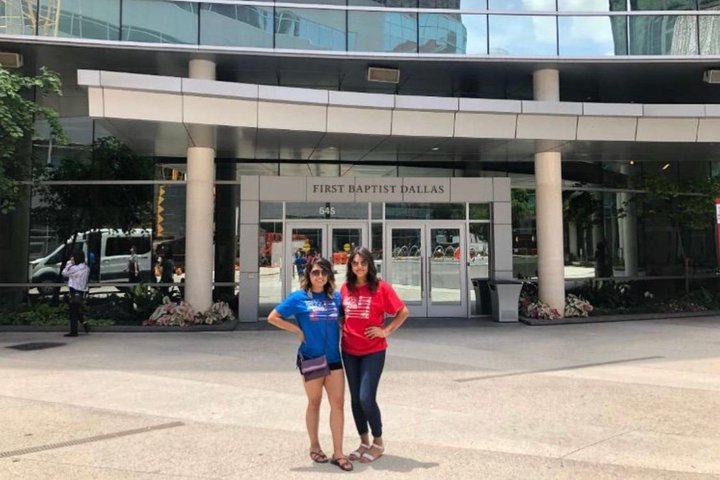 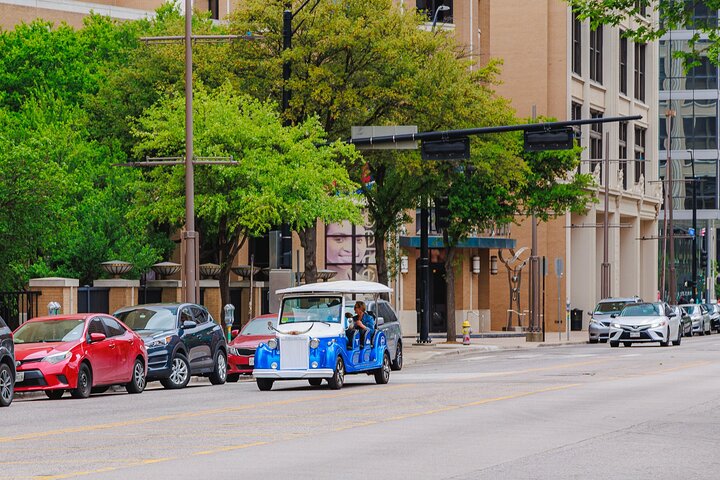 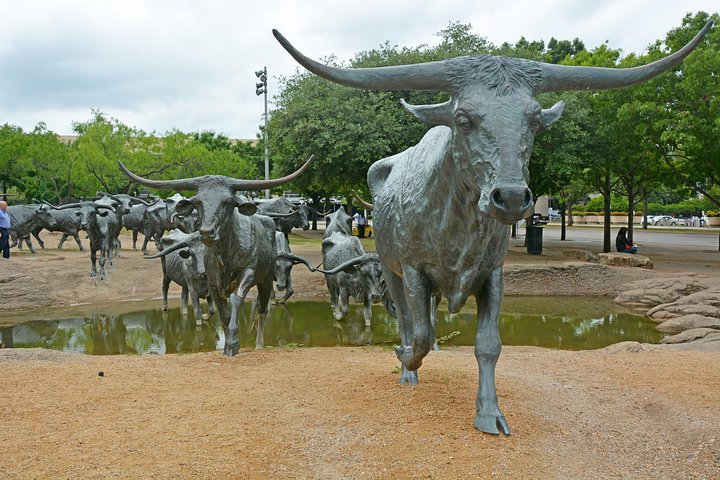 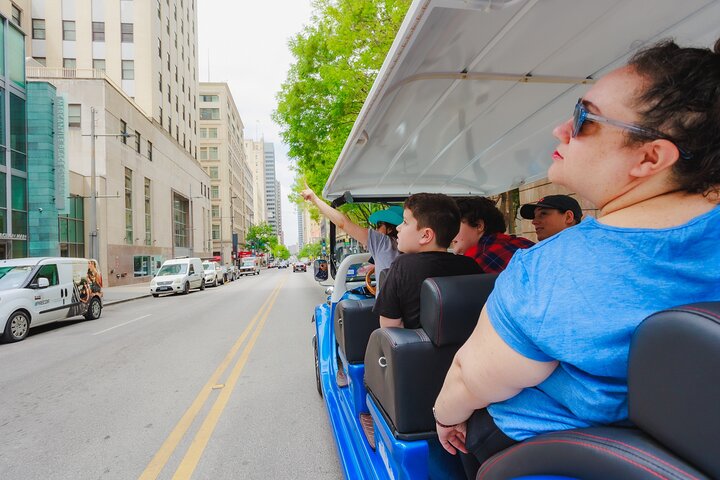 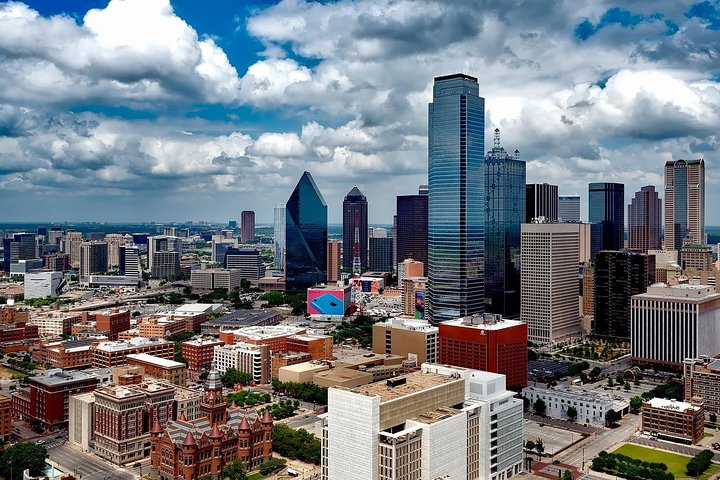 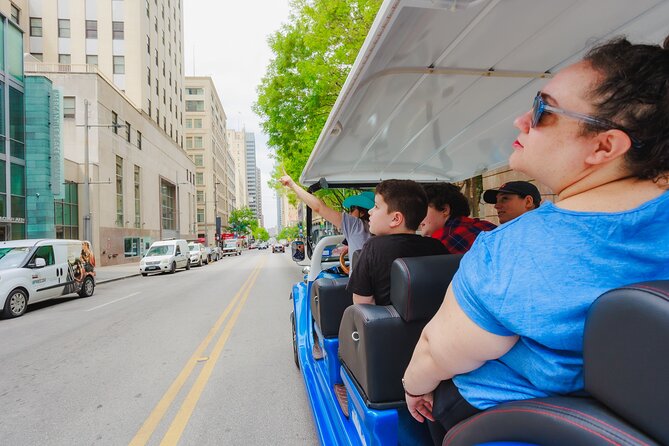 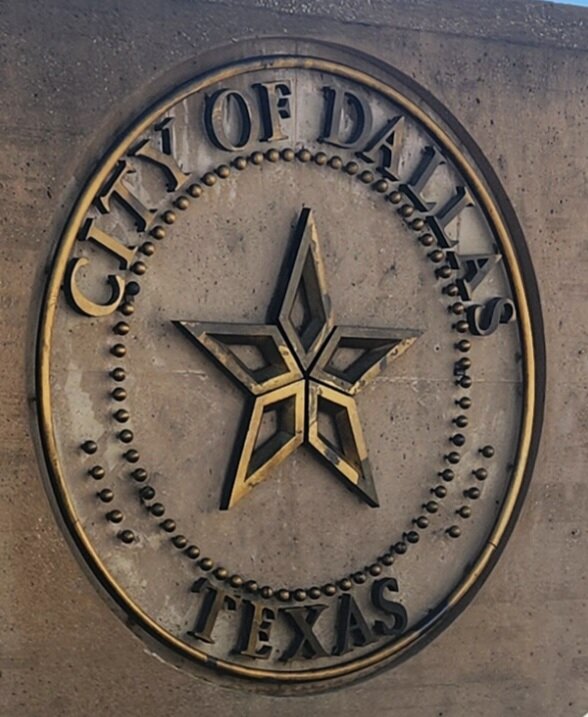 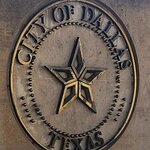 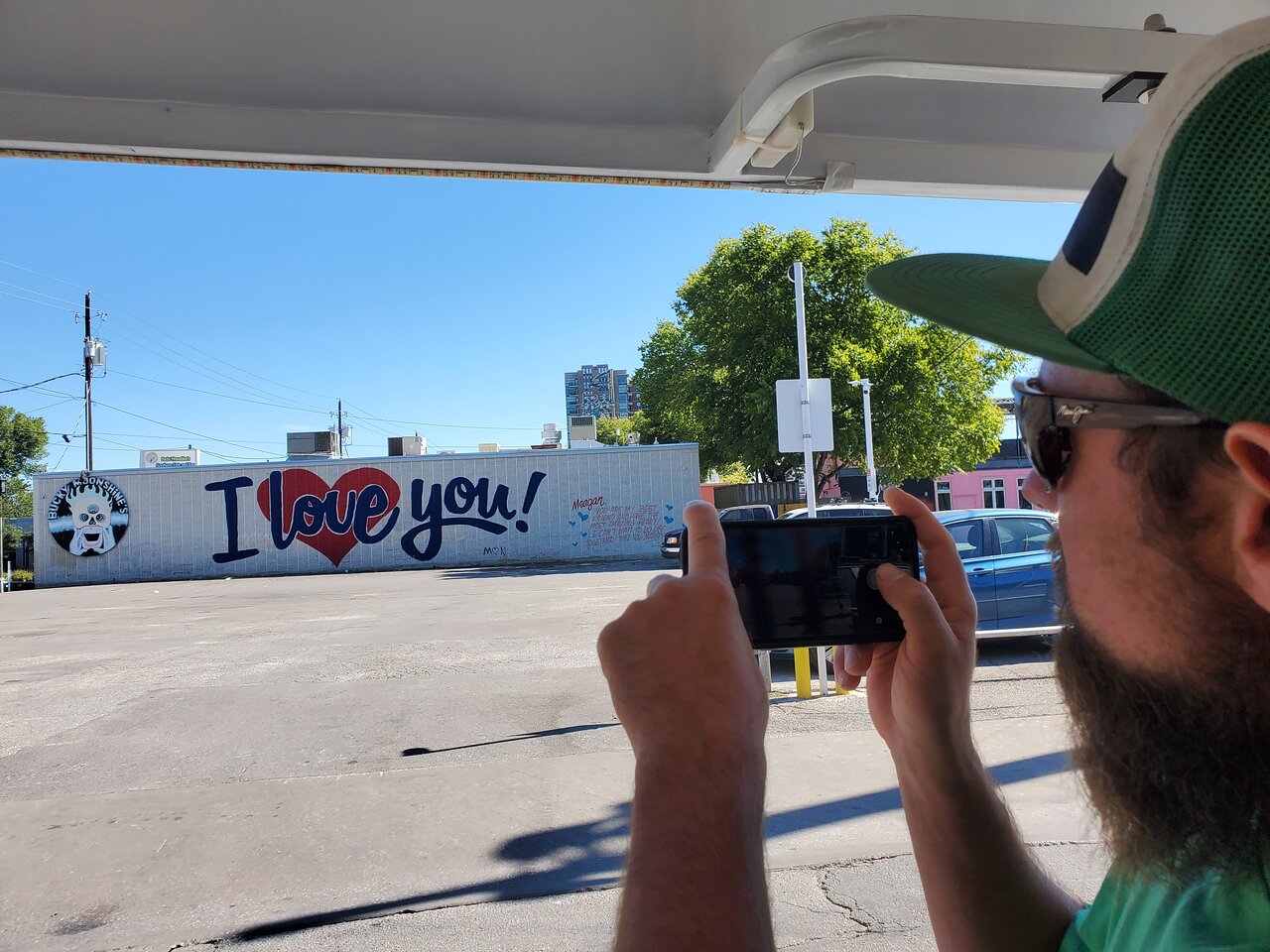 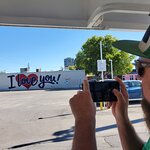 Hop on and Cruize Downtown Dallas in one of our electric Cruizers. Our fun guided small group tour takes you around downtown to not only the must-see sights, but other spots that sometimes get overlooked. Everything is bigger in Dallas.
You can choose 1 or 2 hours options
Highlights include:
JFK Memorial
Pegas sculptor
Pioneer Plaza
Dallas City Hall
First Baptist Church Fountain Plaza
Farmers Market
Giant Eye
Arts District
Klyde Warren Park
American Airlines Center
Dealey Plaza
Our open air Cruizers hold 7 passengers plus the driver. This is a great way to see what Dallas has to offer.

Your guide will show you historical, and beautiful sights around downtown Dallas. There will be stops for photos worthy of anyone's instagram.

10 min Stop for a popular photo opportunity
Get a chance to see one of largest bronze collection in the world. The 49 bronze steers and 3 trail riders sculptures.

Memorial has been built to recall
the Dallas Police officers killed in the line of duty.
A stainless steel construction emerges from the
site like a figurative officer’s shield and carries the
badge numbers and names of police killed in the line
of duty.

Designed by IM Pei as an inverted pyramid.

The Arts District is Downtown’s cultural hub, known for the strikingly angular Meyerson Symphony Center, the lavish Winspear Opera House and the Dallas Museum of Art, with its vast collection spanning ancient times to the present. The Nasher Sculpture Center exhibits modern masterpieces in a verdant setting, while the Crow Collection of Asian Art displays religious and secular pieces from diverse eras and cultures.

Klyde Warren Park is a 5.2-acre public park in Downtown Dallas, Texas. The park is over the Woodall Rodgers Freeway, and opened in 2012.

The American Airlines Center (AAC) is a multi-purpose indoor arena located in the Victory Park neighborhood in downtown Dallas, Texas. The arena serves as the home of the Dallas Mavericks of the National Basketball Association and the Dallas Stars of the National Hockey League. The arena is also used for concerts and other live entertainment. It was opened in 2001 at a cost of $420 million.

The West End Historic District of Dallas, Texas, is a historic district that includes a 67.5-acre (27.3 ha) area in northwest downtown, generally north of Commerce, east of I-35E, west of Lamar and south of the Woodall Rodgers Freeway. It is south of Victory Park, west of the Arts, City Center, and Main Street districts, and north of the Government and Reunion districts. A portion of the district is listed on the U.S. National Register of Historic Places as Westend Historic District. A smaller area is also a Dallas Landmark District. The far western part of the district belongs to the Dealey Plaza Historic District, a National Historic Landmark around structures and memorials associated with the assassination of John F. Kennedy.

Informacion Adicional
"Confirmation will be received at time of booking"
"Not wheelchair accessible"
"Near public transportation"
"Infants must sit on laps"
"Most travelers can participate"
"This experience requires good weather. If it’s canceled due to poor weather, you’ll be offered a different date or a full refund"
"This experience requires a minimum number of travelers. If it’s canceled because the minimum isn’t met, you’ll be offered a different date/experience or a full refund"
"This tour/activity will have a maximum of 7 travelers"
"Hand sanitizer available to travelers and staff"
"Transportation vehicles regularly sanitized"
"Guides required to regularly wash hands"
"Regular temperature checks for staff"