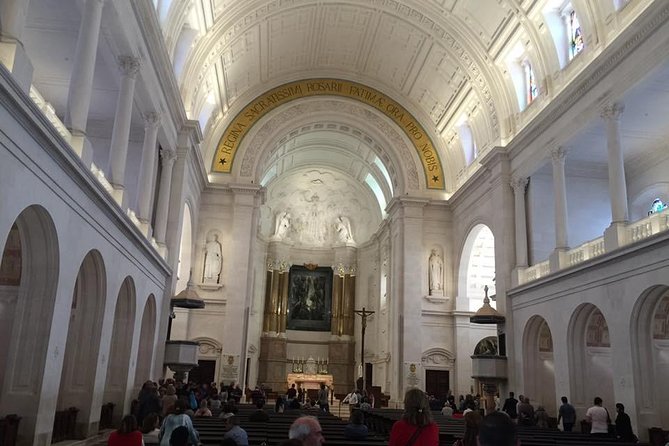 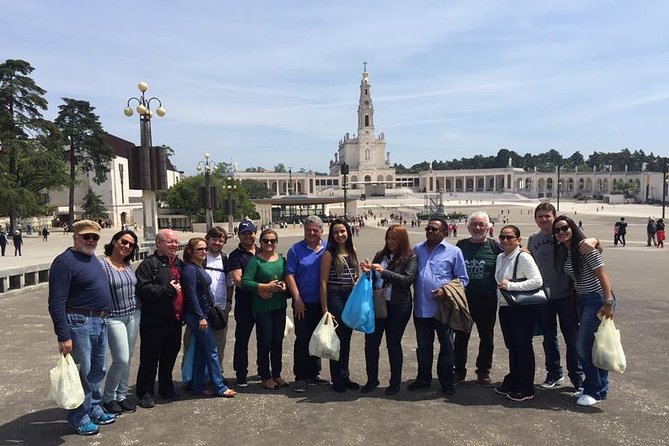 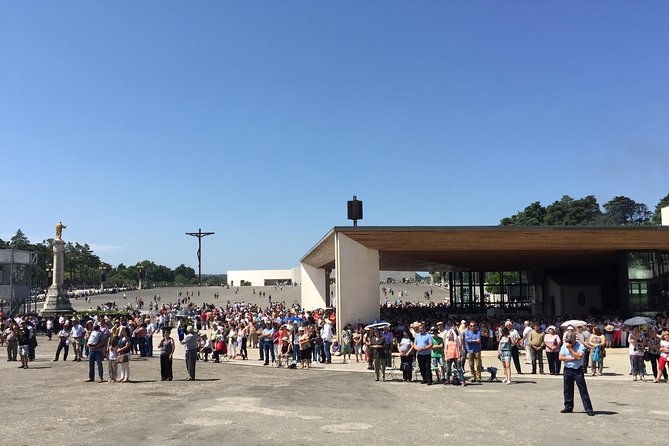 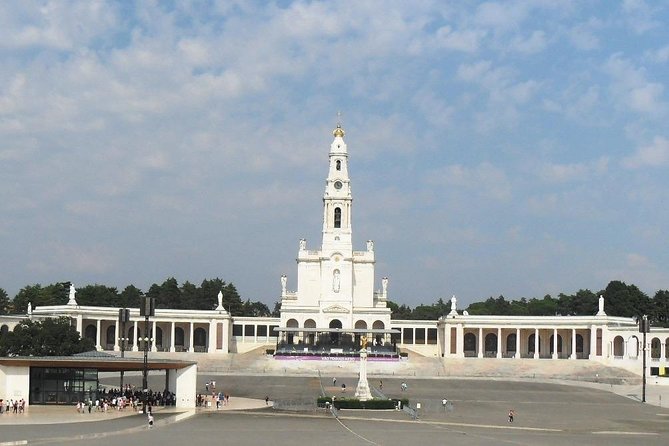 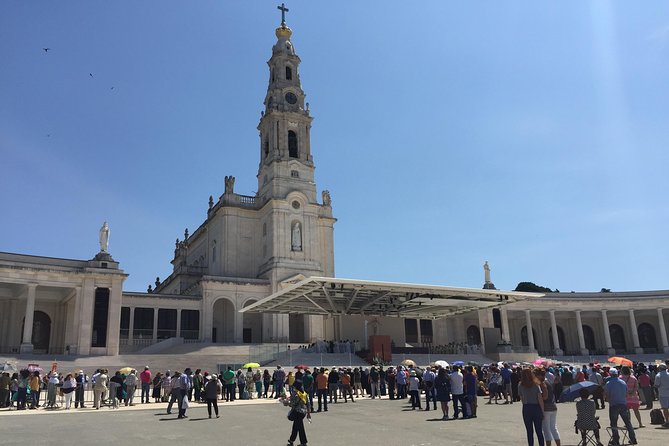 Fátima Tour from Lisbon:
As one of the largest religious pilgrimage sites in the World, Fatima was designated a UNESCO World Heritage Site and is known as the place where the Virgin Mary appeared to three little shepherds.
In a private car, visiting Fatima from Lisbon can be a challenge. This tour offers a solution by providing transportation between the Portuguese capital and one of the country’s most important religious sites, without sacrificing the comfort of private transportation. Your guide takes you to top sites in and around Fatima, including a factory of religious objects and sacred religious sites, and then leaves you free to explore each location on your own.

Fatima, the Altar of the World

One of the largest Marian centres in the world.

This Marian centre of pilgrimage evokes the apparitions of Our Lady to the three little shepherds Lucia, Francisco and Jacinta, which took place in 1917 and were recognized in 1930. The spot was a rural property called Cova da Iria, and it belonged to the parents of Lucia, who donated it to the Shrine. It was here that five of the six apparitions took place.

The Basilica of Our Lady of the Rosary of Fatima was built according to a project by Dutchman Gerardus van Krieken and continued by architect João Antunes. The first stone was blessed on May 13, 1928 and the church dedicated on October 7, 1953. The following year, it was granted the title of Basilica by Pope Pius XII.

The architectural and decorative style is very simple. Inside, there are 14 lateral altars dedicated to the mysteries of the Rosary. The stained glass windows and the paintings that adorn the church are by João de Sousa Araújo; they date from 1967 and represent scenes alluding to the life of Our Lady, the Apparitions and the Message of Fatima. Those in the main chapel, representing the Evangelists, the Apparition of the Angel and scenes of Pilgrimage, were created by the Madrid company Maumejean and Sons. On the right side of the transept, the Gospel, is the tomb of Francisco, who died in 1919. On the left side, the Epistle, is the tomb of Jacinta, who died in 1920; next to her is the tomb of Sister Lucy, who died in 2005. Francisco and Jacinta Marto were canonised in the Shrine of Fatima, on May 13, 2017, on the International Anniversary Pilgrimage of the centennial of the Apparitions, presided over by Pope Francis.

It is one of the most important Marian shrines belonging to the Catholic Church in the world and one of the leading international religious tourism destinations, receiving around six million visitors a year. It was visited by Popes Paul VI (1967), John Paul II (1982, 1991 and 2000), Benedict XVI (2010) and Francis (2017). The annual pilgrimages are celebrated on the 13th of every month from May to October.

The small village of Aljustrel was the birthplace of the three shepherds. The house of the Francisco and Jacinta brothers can be visited, as well as the house of Lucia, converted into a museum that portrays the local way of life of the early 19th century. XX. From Aljustrel, you can walk the Valinhos Sacred Way. This was the path that Lucia, Jacinto, and Francisco took from Aljustrel to Cova da Iria. This sacred road has 14 stations in memory of the Passion of Jesus and there is also a 15th station that evokes the Resurrection, known as Hungarian Calvary or St. Stephen's Chapel. The chapel and the Stations of the Cross were the gift of Hungarian Catholics, refugees in the West, after the Soviet invasion of Hungary. The Via Sacra (inaugurated on August 11, 1962) and the Chapel (inaugurated on March 12, 1964) was designed by engineer Ladislau Marec. The 15th station opened on October 13, 1992. Before arriving at St. Stephen's Chapel, travelers can see the “Loca do Anjo” where the three shepherds received the “Angel of Peace” for the first and third time. (in spring and autumn 1916). This is a place of absolute seclusion, totally preserved, where olive and holm oaks define the spirit of the place. The Hungarian Calvary and the Valinhos Sacred Way are a must for all pilgrims who travel to Fatima, the altar of the world, in search of faith for answers to their daily problems. This is the perfect place for praying and for introspection.

This Basilica is the latest construction of the Fatima Sanctuary complex and is dedicated to the worship of the Holy Trinity. The intention of building a new temple there dates back to 1973, as it was found that the Basilica of Our Lady of the Rosary of Fatima was no longer large enough to welcome all the pilgrims, particularly on Sundays and other days of medium affluence. In 1997, through Monsignor Luciano Guerra, the Shrine of Fatima organized an international competition for the design of a new building next to Pius XII Square, with a scale appropriate to the real needs. The laying of the first stone took place on June 6, 2004, Solemnity of the Holy Trinity; Three years later the work was completed, and the church was dedicated on October 12, 2007 by Cardinal Tarcisio Bertone, then Vatican Secretary of State and Benedict XVI's legacy to close the 90th anniversary of the apparitions of Our Lady. On 13 August 2012 the church was elevated to the category of Basilica. [1] [2]
The new church was dedicated to the Holy Trinity for a number of reasons, including the following: the apparitions of the Angel of Peace, with his insistent invitation to worship God, the Holy Trinity; the words of John Paul II in May 1982, spoken in the Chapel of Apparitions, by which he raised his thanksgiving to the Holy Trinity; the Great Jubilee of the Year 2000, also dedicated to the Holy Trinity.

The three shepherd children to whom Our Lady appeared - Lúcia and her cousins, Francisco and Jacinta - were born in the small village of Aljustrel, around 2 kms from the sanctuary of Fátima.

The single-storey cottages formerly inhabited by the little shepherds are very similar in terms of architecture and simplicity and are open to the general public. The house inhabited by the brother and sister, Jacinta and Francisco was built in 1888 and is located around 200 m from the house of their cousin, Lúcia, built in 1885. The House-Museum of Aljustrel is located next to the latter, displaying agricultural implements, cooking utensils, clothes and furniture, in order to demonstrate the everyday lives of local mountain dwellers in the early 20th century.

Duración: 8 To 9 Hours
Lugar de comienzo: Traveler pickup is offered
Pick-up and Drop-off at your address in the city of Lisbon, if you are outside the city
of Lisbon you will have added costs of the transfer or else you will find a meeting
point in Lisbon-