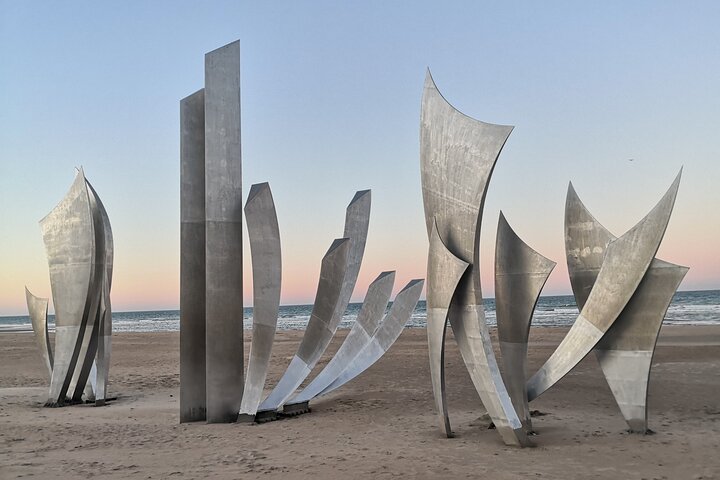 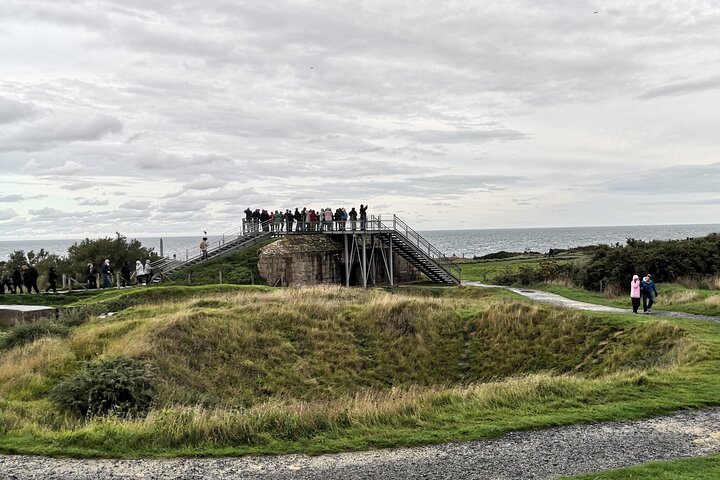 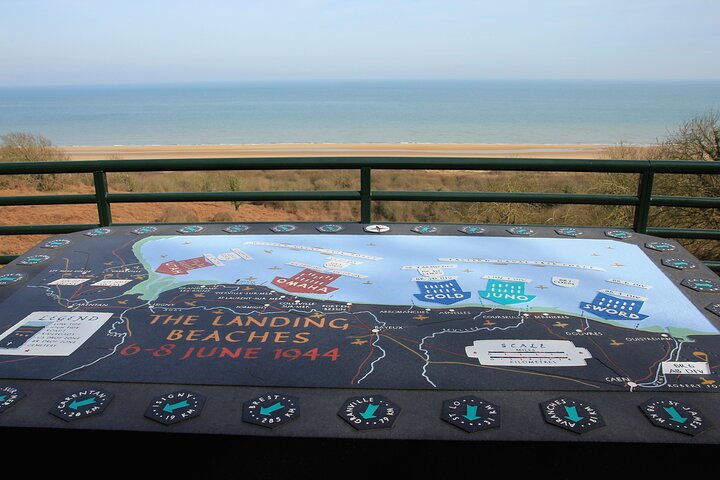 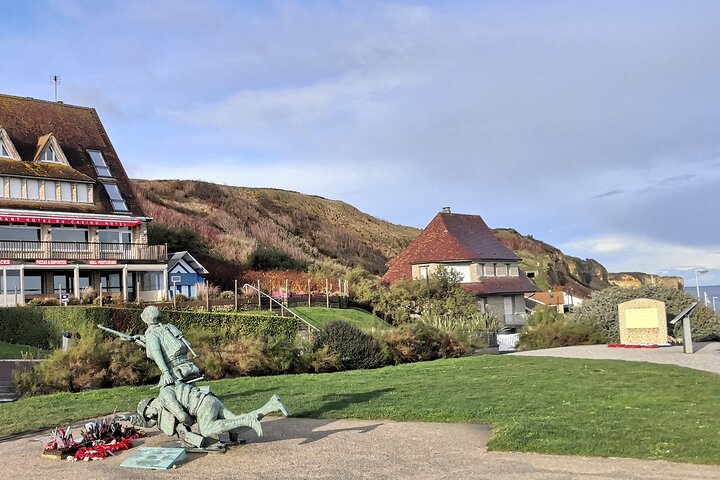 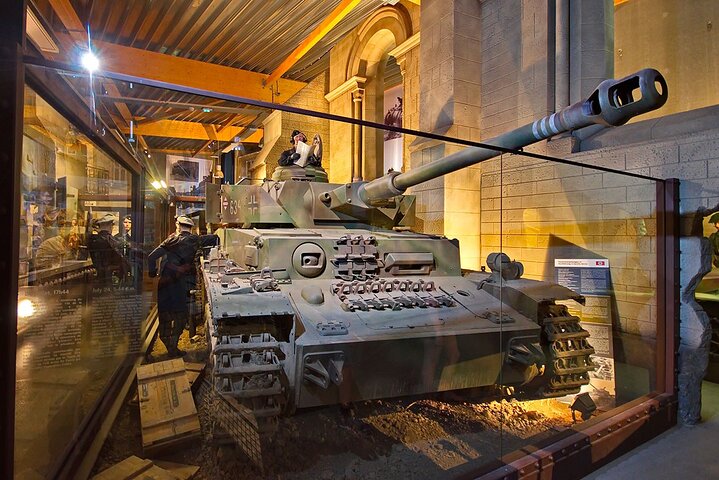 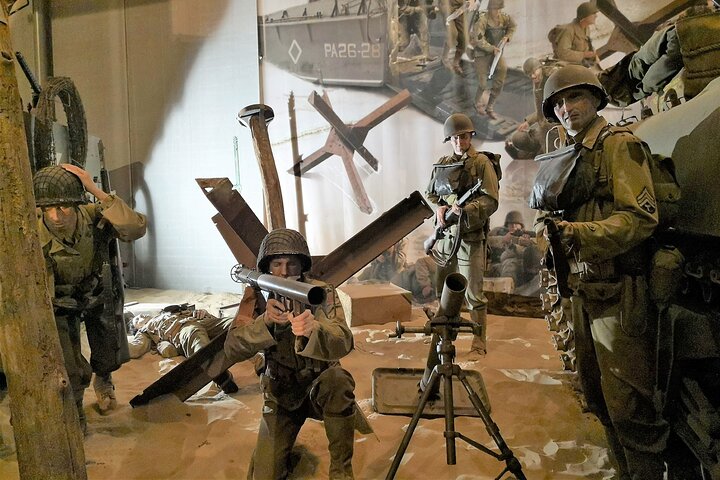 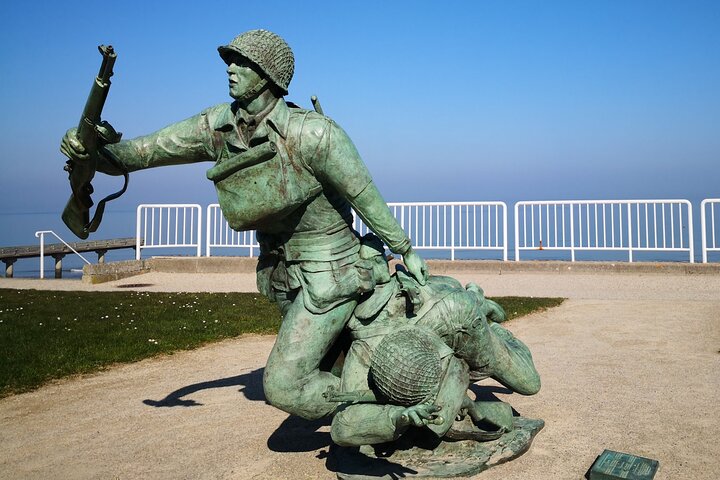 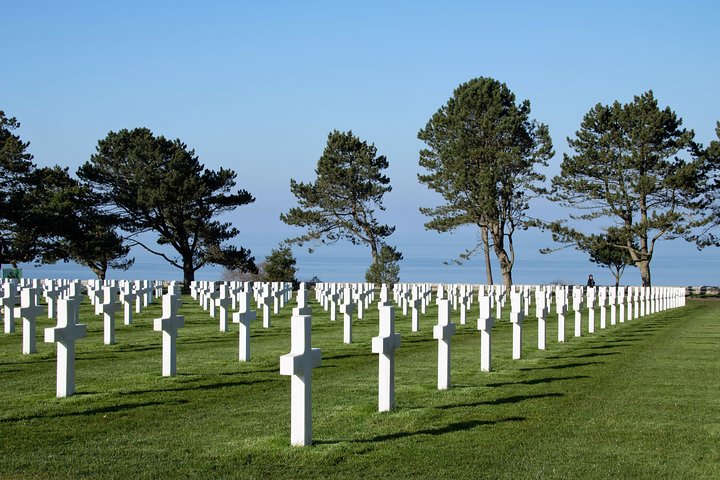 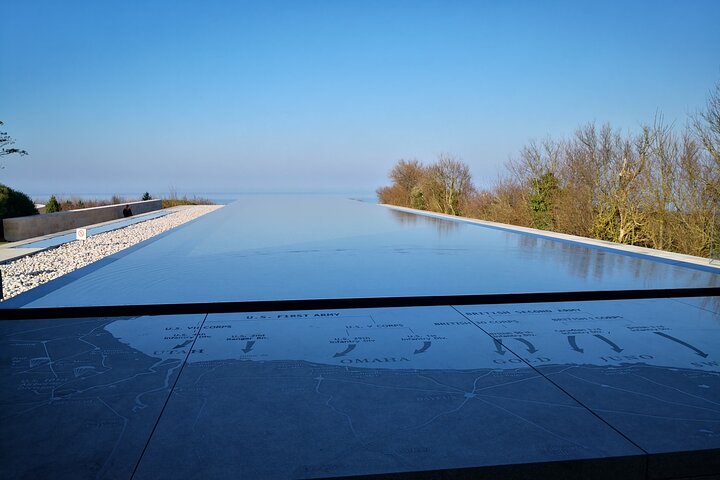 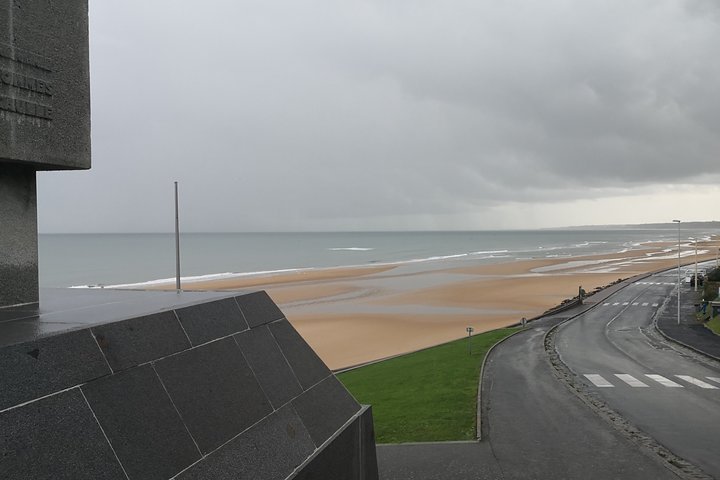 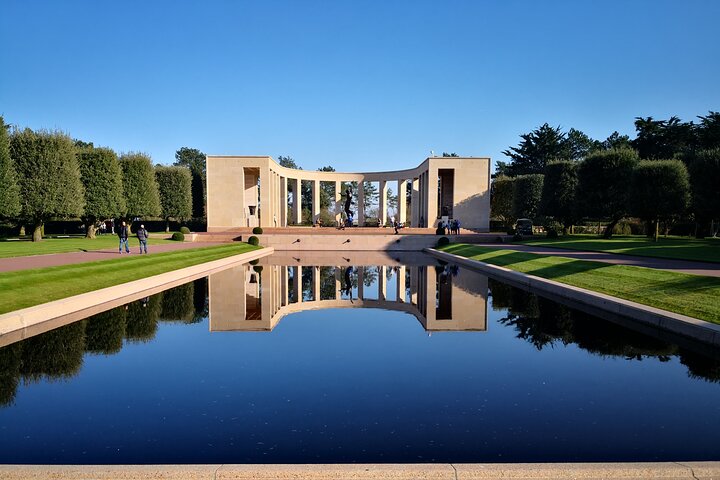 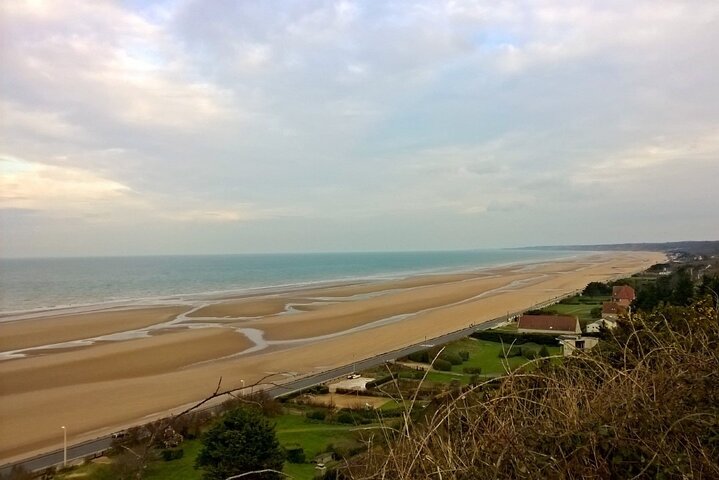 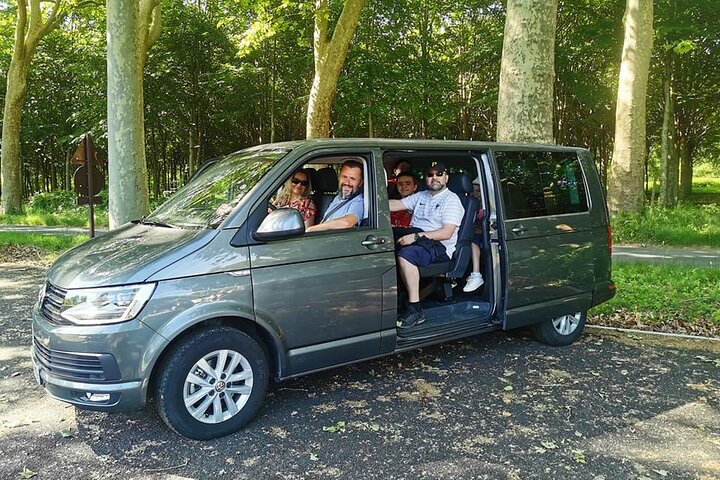 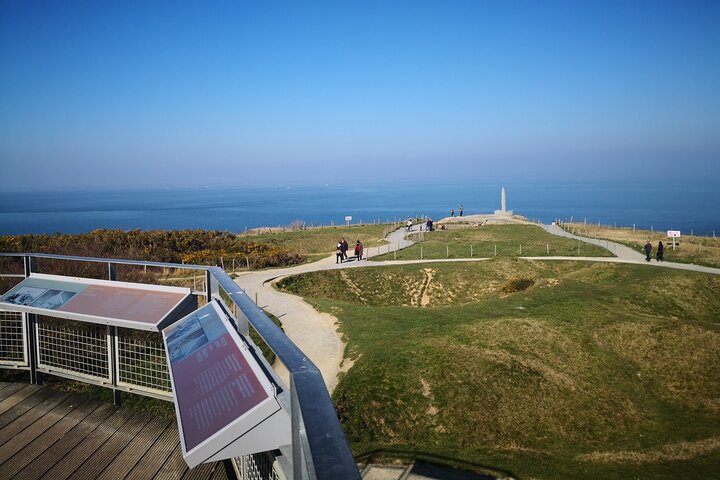 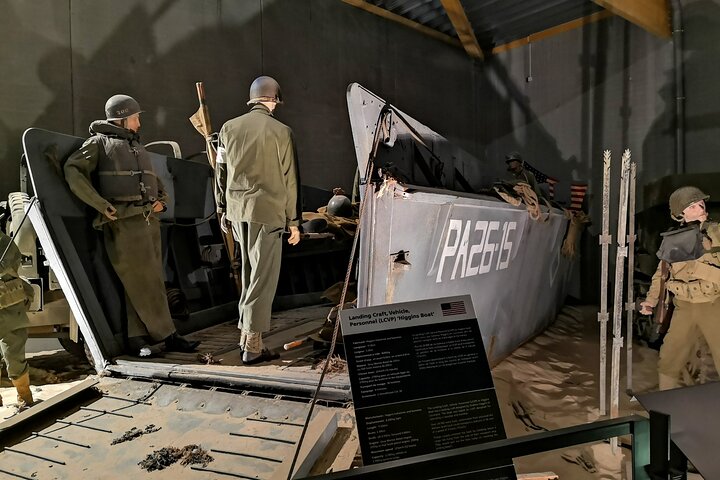 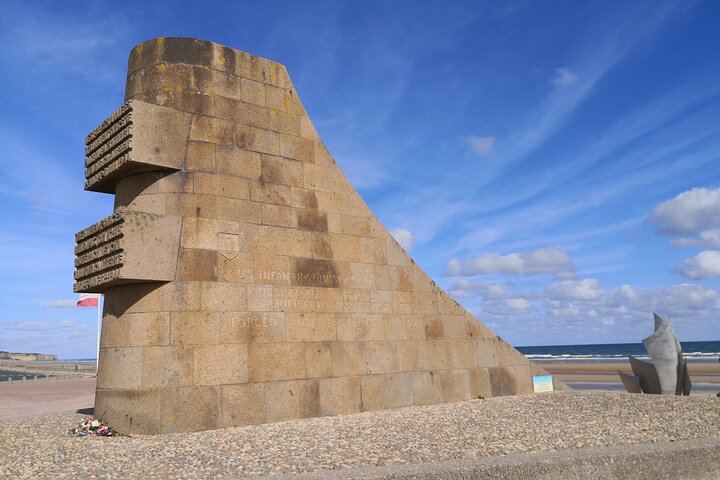 Half a day visit to Normandy D-Day battle sites and U.S landing beaches from Caen

Walk along the Bloody Beach (Omaha)

After meeting With your driver-guide "Régis" you will travel to the Normandy beaches aboard an air-conditioned minivan.

In mid 1943 the german TODD organisation set up 6 long range artillery guns (155mm caliber) housed in concrete bunkers and facing the english channel above the cliff.

In fact, "Pointe du Hoc" was one of the thousand german stronghold positions of Hitler' project to build a wall of defense along the coast in Europe. Known as « The Atlantic Wall » and which consisted to build bunkers, guns battery and beach obstacles network along the coastline.

In June 6, 1944 at 07h10 am 225 US Rangers aboard barges landed just below from the cliffs and began to scale them using ropes in order to stormed the guns emplacement and then destroy them all. Blown up concrete bunkers, bombs craters and traces of the battle are still visibles today.

The guide is now taking you to visit the beautiful maintained American Cemetery in Colleville sur Mer which overlooks Omaha Beach nearby. The 180 acre site contains 9,387 perfectly aligned white crosses and a memorial chapel which adds the finishing touches to this moving scene, allowing visitors to reflect on the price of war.

Overlord Museum chronicles the period of the Allied landing until the liberation of Paris. The collection was collected by someone who was both a witness to the conflict and involved in the reconstruction of Normandy. Personal items from individual soldiers and armoured fighting vehicles from the six armies in Normandy will be presented as a series of reconstructions showing over 35 vehicles, tanks and guns.

Informacion Adicional
"Confirmation will be received at time of booking"
"No heart problems or other serious medical conditions"
"Not recommended for pregnant travelers"
"Most travelers can participate"
"Near public transportation"
"Not wheelchair accessible"
"This experience requires good weather. If it’s canceled due to poor weather, you’ll be offered a different date or a full refund"
"This experience requires a minimum number of travelers. If it’s canceled because the minimum isn’t met, you’ll be offered a different date/experience or a full refund"
"This tour/activity will have a maximum of 7 travelers"
"Face masks required for travelers in public areas"
"Face masks required for guides in public areas"
"Face masks provided for travelers"
"Hand sanitizer available to travelers and staff"
"Social distancing enforced throughout experience"
"Regularly sanitized high-traffic areas"
"Gear/equipment sanitized between use"
"Transportation vehicles regularly sanitized"
"Guides required to regularly wash hands"
"Regular temperature checks for staff"
"Contactless payments for gratuities and add-ons"