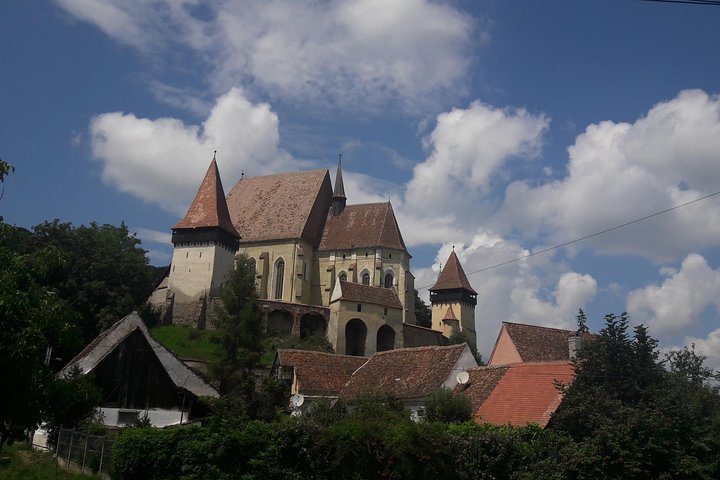 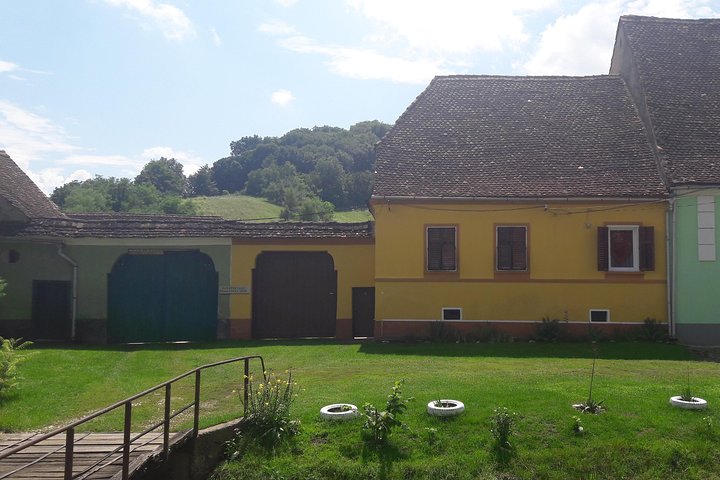 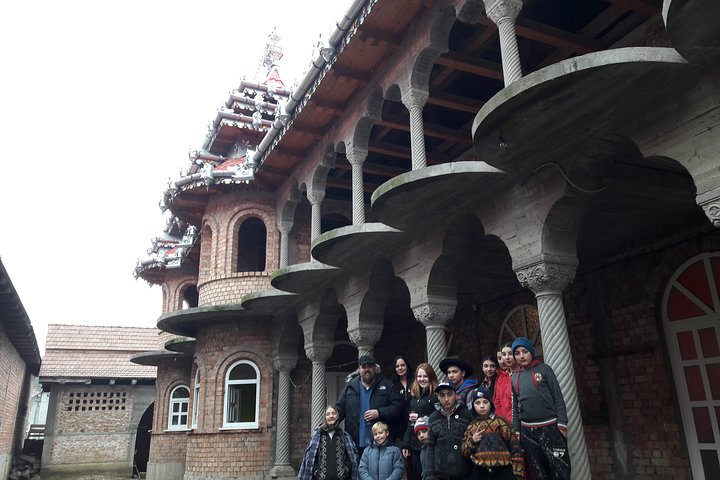 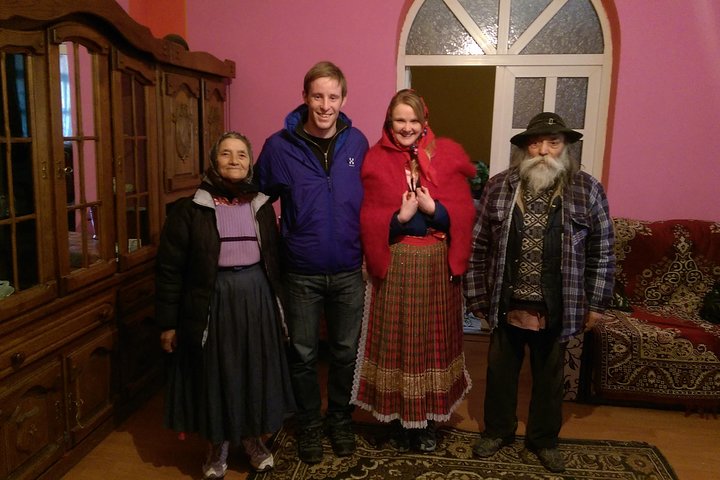 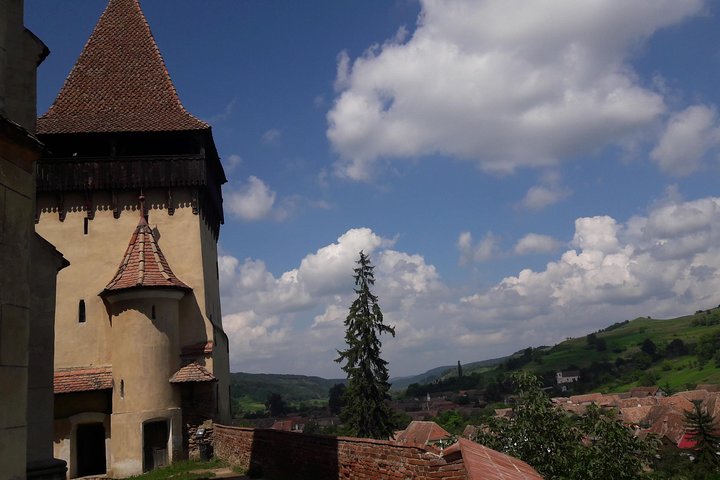 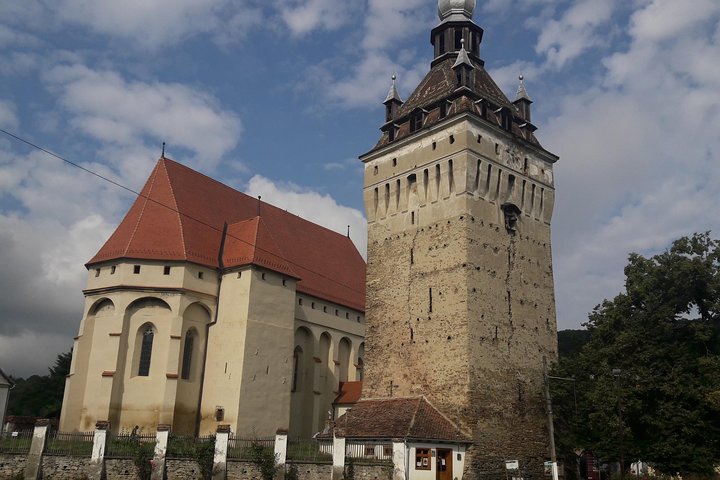 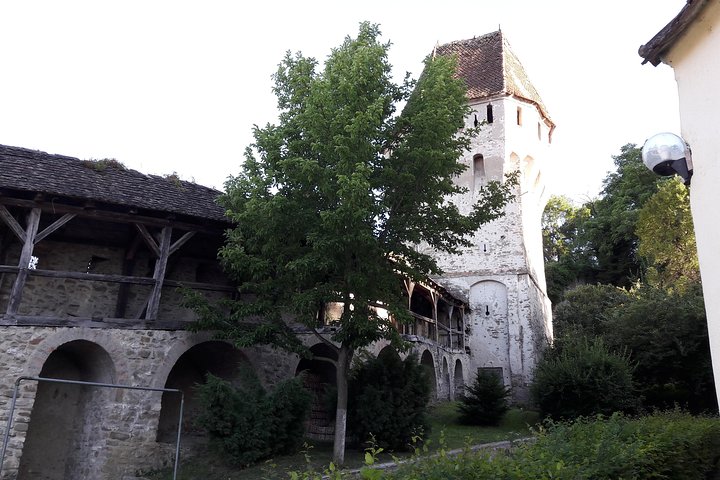 In this tour we will visit 3 of the most important and beautiful tourist attractions in Transylvania.

You will be taken from your hotel in Brasov by a professional guide and you will travel with a luxury mercedes van or with a similar air-conditioned car to the center of Transylvania .

Sibiu is a pedestrian-friendly city with two easily accessible levels: the Upper town, home to most of Sibiu's historic sights, and the Lower town, lined with colorful houses on cobblestone streets and bounded by imposing city walls and defense towers overlooking the river Cibin.

Optional( extra Price ) we can visit Gypsies family in Brateiu village .We will interact with them, we will visit their home, built with many turrets as a small palace.

Childrens will dance to us, dress and photograph in their gypsy clothes.

Next -is considered to be the most beatiful and well preserved inhabited citadel in Europe , with an authentic medieval arhitecture .Vlad Tepes, alias Dracula, was born in this city

Sibiu (Hermannstadt in German) was the largest and wealthiest of the seven walled citadels built in the 12th century by German settlers known as Transylvanian Saxons. The riches amassed by its guilds paid for the construction of both impressive buildings and the fortifications required to protect them.

We will take a tour of the old city center and visit: The Large Squere ,the Catholic Church , the Small Squer,the Evangelical Church , the Huet Squer , the Bridge of Lies , the Council Tower .

We will visit Biertan village built by Saxon colonists In the middle of the village is the largest and most imposing Saxon fortified church in Transylvania.It was built in the late 16th century in the late Gothic style.

The most important religious center of Saxons from Transylvania for almost three centuries, from 1572 to 1867, during which time it served as a Bishop See, this monument is today one of the best conserved from all the hundreds of fortified churches built after the Saxons settled here. The hall-church was finalized in 1525 in a Late-Gothic style with Renaissance elements visible in the portal doors. It still preserves many of its original elements, including the early 16th century painted pews and a beautiful pulpit carved from one single piece of stone in 1500.In the church, you’ll also see the original altar — the largest in Transylvania — with 28 painted panels, dated to 1515, partially inspired by the altarpiece of the Scottish Abbey in Vienna. The piece of resistance is, nonetheless, the door of the vestry. Decorated with inlays representing fortified towers and coffins and dated to 1515, the door has an ingenious system that simultaneously activates 15 locks when the door is closed. Used to protect the most valuable goods of the church in case of need, the door was also presented at the World Fair from Paris in 1889.While most of the towers are closed for visitors, you can still take a peek inside the Mausoleum Tower where the funeral stones of nine Saxon bishops are exhibited. Next in line is the Marriage Prison Tower that represented the medieval alternative to couples’ therapy. A small room with one bed, one plate and one table was the place where couples were locked until they found a solution to their marriage problems. A solution that apparently worked as in the 400 years of use only one couple got a divorce.

The main goal of a fortified church during attacks and sieges was to defend the lives of locals. Depending on the time when they were built, several defensive solutions were used. Biertan Fortified Church is one of the best examples of the know-how and experience local Saxon had acquired in transforming churches into real fortresses.

In this case, an extra level was built on top of the nave and choir, and the church was surrounded by enclosing walls connected through tower gates.

The Catholic Tower, it preserves pre-Reformation fragments of frescoes, a very rare case in the Saxon space of Transylvania where Catholicism was replaced by Protestantism. If you look carefully, you’ll recognize Saint George, Virgin Mary with baby Jesus and the Three Kings, plus the scene of the Last Judgement with Christ as the ultimate judge.

Sighisora is considered to be the most beatiful and well preserved inhabited citadel in Europe , with an authentic medieval arhitecture .Is one of the few fortified towns wich are still inhabited .Vlad Tepes, alias Dracula, was born in this city in 1431 and we will visit the house where the mysterious print was born.Central Sighisoara has preserved in a exemplary way the featuress off a small medieval fortified city ,it is been listed by the UNESCO as a World Heritage Site .The Clock Tower, one of the symbols of Sighisoara, guards the citadel entry and going all the way up to the top is a must. The highest and the most imposing tower, it was used until 1556 for the reunions of the Town Council. Due to its dimensions, the Clock Tower offers an excellent view from the last floor balcony over the historical center and the whole town of Sighisoara.

Today, it hosts the History Museum and each room has a thematic exhibition, starting from the ancient time. You can even see the mechanism of the clock and the figurines that announce the exact hour every single day for the past hundreds of years.

Next, you can admire the historical buildings from the small squares in the Upper Town where most of the commercial activity took place in the past. You can also visit the Church of the Dominican Monastery, first mentioned in 1298, and the Museum of Weapons, or admire the Venetian House and the Stag House among the many that belonged to the richest members of the local community. From the City Square, you’re only a few meters away from medieval towers like the Tailors’ Tower or the Cobblers’ Tower.

The Scholars’ Stairs are a distinctive attraction, built in 1642 to protect school children during winter time, connecting the City Square with the School on the Hill, the Church on the Hill, the Ropemakers’ Tower and the Evangelical Cemetery. After the 175 steps, you’ll reach the most peaceful part of medieval Sighisoara, and we strongly suggest you don’t miss the chance of the vast open view of the town and its green surroundings. If the stairs prove too much, try an alternative route that starts next to their base.While here, don’t miss a tour inside one of the most representative Gothic constructions in Transylvania, the Church on the Hill, and a walk in the centuries-old Evangelical Cemetery. Its caretaker lives next to the church, in the Ropemakers’ Tower, the only inhabited tower of the remaining nine. From the cemetery, you can go back down on a small paved street without taking the stairs again.

Informacion Adicional
"Confirmation will be received at time of booking"
"Not wheelchair accessible"
"Near public transportation"
"Infant seats available"
"Most travelers can participate"
"This is a private tour/activity. Only your group will participate"
"Face masks required for travelers in public areas"
"Face masks required for guides in public areas"
"Face masks provided for travelers"
"Hand sanitizer available to travelers and staff"
"Social distancing enforced throughout experience"
"Regularly sanitized high-traffic areas"
"Gear/equipment sanitized between use"
"Transportation vehicles regularly sanitized"
"Guides required to regularly wash hands"
"Regular temperature checks for staff"
"Temperature checks for travelers upon arrival"
"Paid stay-at-home policy for staff with symptoms"
"-the cars will be disinfected after and before every tour with professional equipment
-tourist will recive free masks and gloves and also free hand sanitizer and to minimize outside contact we also offer free bottled water
-every tourist will be picked up from their hotel or accommodation"

Duración: 8 To 9 Hours
Lugar de comienzo: Traveler pickup is offered
We will come pick you up from your hotel/accomodation.