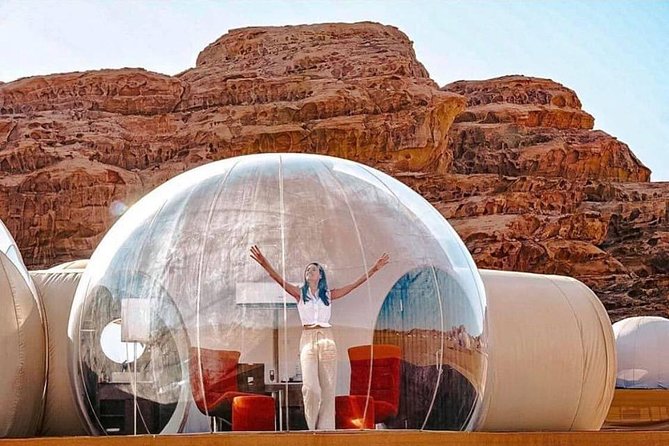 Experience three of Jordan's most famous highlights in a two day private tour. Departing Amman in the morning, we drive three hours south in an air-conditioned modern and insured vehicle driven by one of our professional English speaking drivers. Upon reaching the Rose-Red city of Petra, Jordan's most famous attraction, you enter the siq and explore the lost city of the Nabateans with its amazing architecture. In the afternoon depart Petra for Wadi Rum; probably the most spectacular deserts in the world. Arrive to your desert camp set in the middle of the desert where you enjoy a traditional dinner. Overnight at camp. The Next morning we explore the desert in local off-road vehicles before we depart north to the Dead Sea, reaching the Dead Sea 4 hours later. Enjoy the tranquil waters at resort and soak up the sun and experience the famed mud of the area before returning to Amman.

Stop At: Wadi Rum Protected Area, Wadi Rum Jordan
Then go to Wadi Rum and make a 2-hour Jeep tour to explore the monuments of Wadi Rum and then watch the sunset of the distinctive sun in that area and then go to the camp the place of residence, which has been booked by customers to bathe and change clothes and dinner and other events evening inside the camp.
Wadi Rum,
The Moon Valley is also called due to its topography similarity with the topography of the moon, a tourist valley located in southern Jordan, 70 km north of the coastal city of Aqaba. Wadi Rum is the common name used in the media for the whole region. Most of the sites and tourist camps are located outside Rum village.
Characterized by its relatively high mountains, it has the highest mountain peaks in the south of the Levant: Um al-Dami and Jabal Ram. The main road to Wadi Rum and the small village of Rum is east of the desert road at about five kilometers south of the city of al-Qawira and 25 kilometers north. Of Aqaba. From there, the road stretches up to about 35 km through the desert and ends until Wadi Rum. Wadi Rum is considered to be one of the most touristic areas in Jordan to which tourists come from all over the world due to the natural site, which is not recognized by any human being but it is the act of nature despite the existence of inscriptions thamudic and Islamic.
In the Wadi Rum area, the tourist camps that replace the hotels are a nature reserve that does not allow hotels to be built.
Wadi Rum Geography
Wadi Rum is part of the desert of sale. This area is characterized by the presence of high Rocky Mountains scattered in a large sandy plain. The settlement is the common name of the Bedouin population of the whole region, and a rectangular settlement area from south of Sharah Heights and Ras al-Negev in Jordan to southwest of Tabuk in Saudi Arabia. The mountains of this region are mountains of sandstone that have taken their distinctive shape due to the natural factors of erosion and stripping in ancient times.
History of Wadi Rum
Stone carvings in Wadi Rum
In the deep past, in the late Ice Age (10,000 years ago), field research in the Wadi Rum area shows the existence of population groups where the area was densely wooded and received large amounts of rainfall and its appearance at that time was far from its current desert nature. The presence of large quantities of groundwater in this area is due to the intensity of rainfall in that period.
It is believed that the first to trust the Wadi Rum in history is the Romanian geography Stallman Ptolemy in his book (geography) and mentioned by the name "Armoa " Aramaua and believes Yan this area is mentioned by the Holy Quran as "toss " in the saying: {Didn't you see how God did the habit, toss the same Emad, which did not create Like it is in the country, although this is a controversial topic of another region in Yemen also named "Toss ". In any case, the research in the area of rum and the presence of a population activity in this area between 600 to 800 BC and the area was called "Aram " or "Toss " Iram. Research has also shown that this area was famous for its abundant springs and many hunting animals. The Arabs have inhabited this area since prehistoric times and have written writings in the period of the Nabataean Arabs, who have left a lot of inscriptions and mayed dating back to the 4th century. Wadi Rum, in particular, and the settlement area in general, was a corridor for Arab convoys from the island and Yemen to the Levant, and there are many writings and books showing this.
Tourism in Wadi Rum
This area began to be promoted from the late 1980s after the film "Lawrence of Arabia" was filmed in the 1960s. Now, tourism has become the source of income for many of the people who work as a witness or other business. The Jordanian Ministry of Tourism and Wadi Rum shop as part of the Golden Triangle of tourism, which includes Wadi Rum, Petra and Aqaba. Tourist activities in this area include camping and mountain tours on horseback, camel or SUV use. They also include mountain climbing. The visitor can stay overnight in the camps, which offer meals and other services.
Getting to Wadi Rum
The journey from the capital Amman to Wadi Rum takes about 4 hours on the desert road or about 5 hours on the majestic road, either from Aqaba, and is only one hour away.
Wadi Rum and movies
Photos in Wadi Rum are a lot of international and local movies. The most important of them
Red Planet, where the images of Wadi Rum as the surface of Mars
The face is a BBC documentary on mountain climbing
Lawrence of Arabia is a famous film that enhances the negative stereotypes of Arabs in the West
Mutants: The amateur vendetta, photos of Wadi Rum that the region is Egypt
DIB-2014
Duration: 15 hours

Stop At: Dead Sea, Madaba Jordan
After waking up and having breakfast, we will go to the Dead Sea hotel resort's to spend 3-hours including lunch (with luxury option). and swimming in the Dead Sea through the hotel's beach, use of facilities, towels, dressing rooms, etc. then back to Amman.
Duration: 3 hours

Informacion Adicional
"Confirmation will be received at time of booking"
"A current valid passport is required on the day of travel"
"Infant seats available"
"Service animals allowed"
"Stroller accessible"
"Transportation is wheelchair accessible"
"Wheelchair accessible"
"Upgraded camp offers tents with en-suite toilets and air-conditioning"
"The tour involves quite a lot of walking on uneven ground"
"Basic camp in Wadi Rum offers accommodation in private tents with shared toilets"
"Travelers should have a moderate physical fitness level This experience requires good weather"
"Please wear comfortable walking shoes, bring a hat and sunscreen"
"Please bring warm clothes for the overnight in the desert, as it can become very chilly after sundown and at night"
"Vehicle has space for one medium sized piece of luggage per client"
"Most travelers can participate"
"This is a private tour/activity. Only your group will participate"

Pick up from any hotel in Amman

From Amman City or Amman Airport in case you arrived early morning. Our representative will select you with a welcome banner after finishing customs at Amman Airport. Your reserved destination will bring you all our private transfers. Or you will be met by prior agreement.

Note:
Customers can also ask me through WhatsApp +962790567124 (Emad) to modify the tourist program or to book pick up or drop off from/ to airport. We can also organize any kind of tour from A-Z.