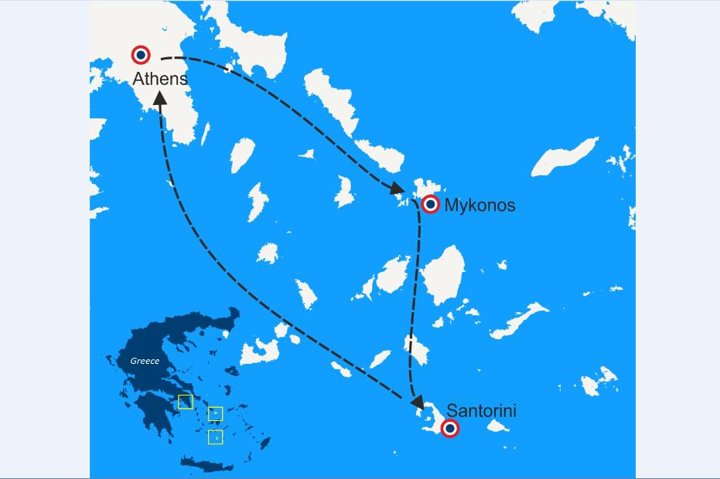 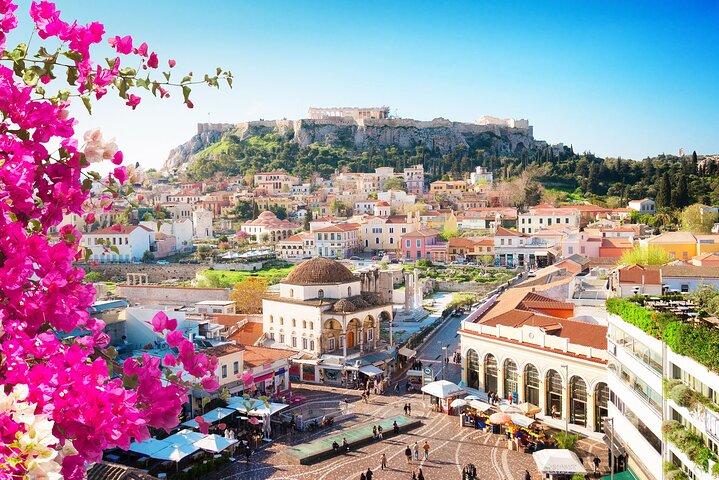 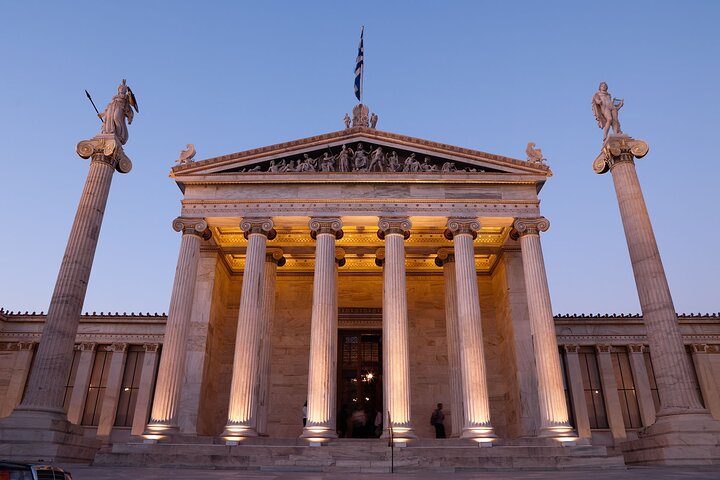 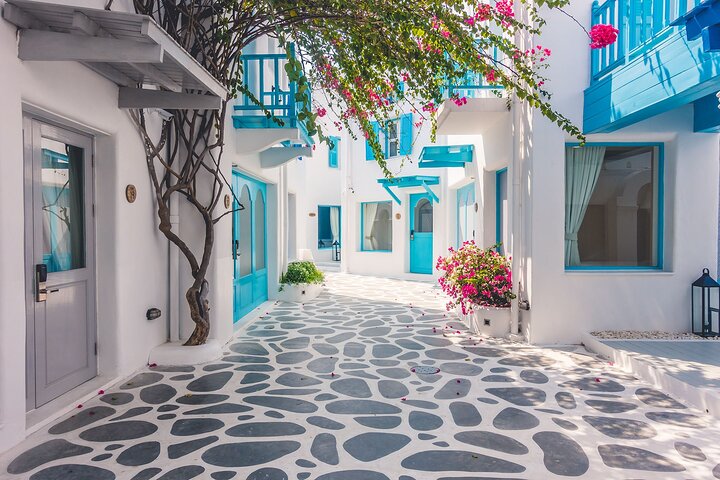 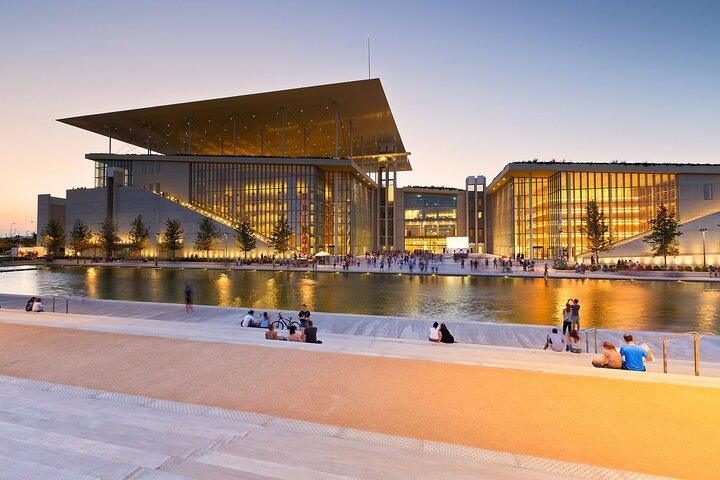 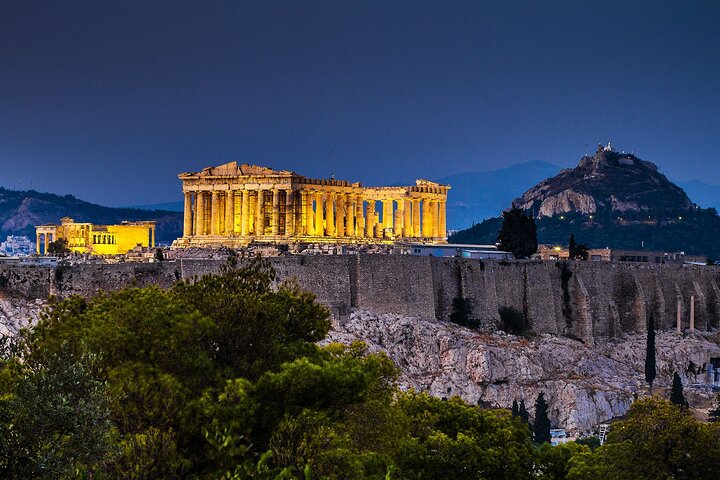 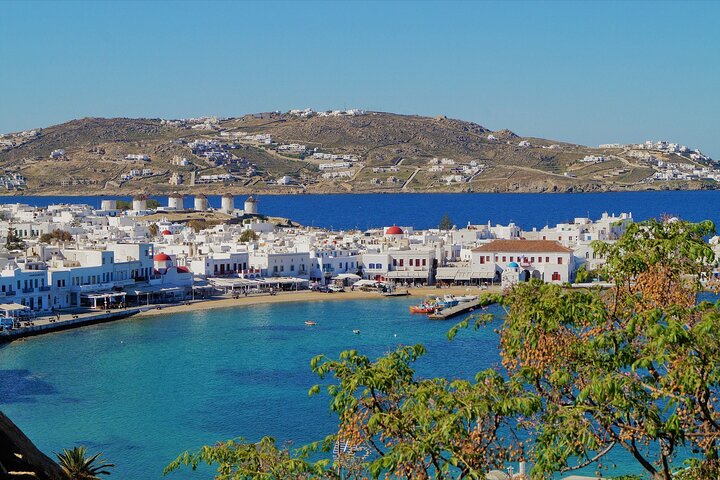 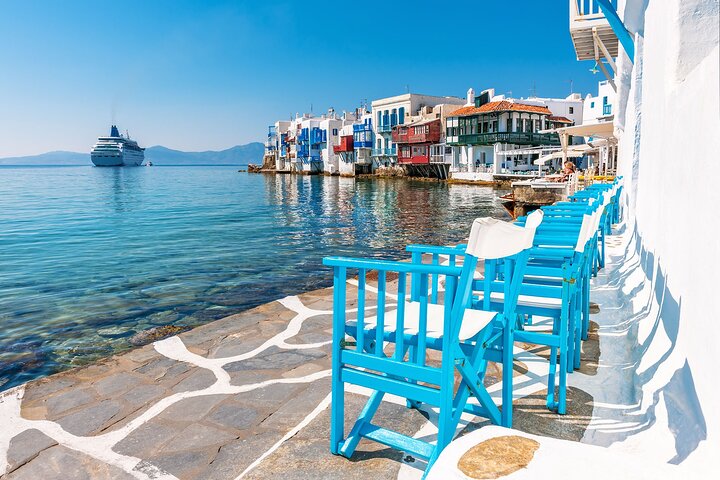 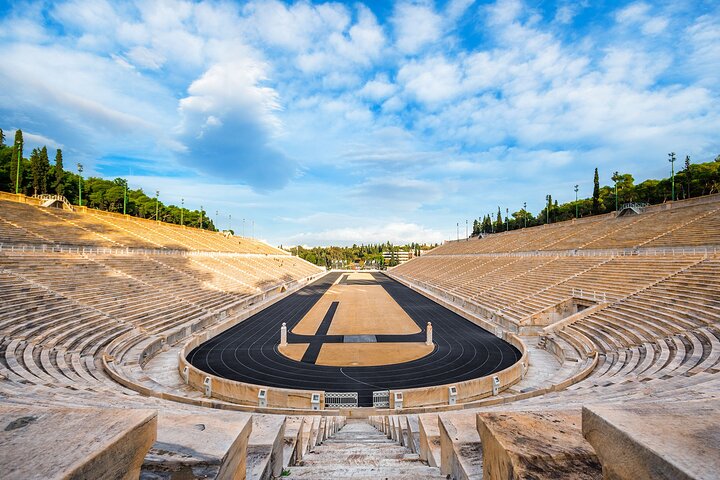 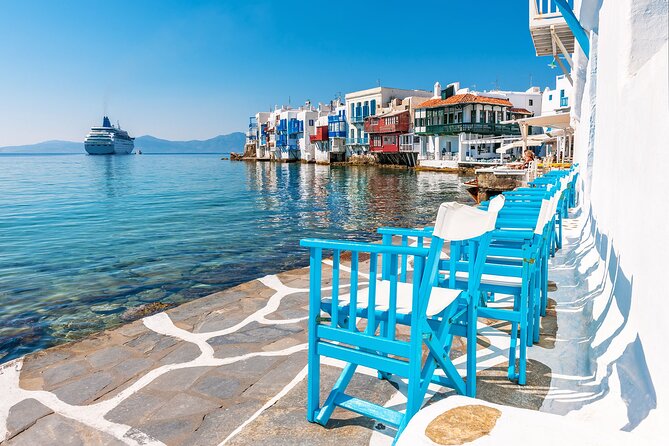 Santorini and Mykonos are the top destinations in Greece. Both located in the Cyclades, Mykonos is famous for the extreme nightlife and the wonderful beaches, while Santorini is famous for the romantic sunset and the impressive caldera. The traditional architecture, the beautiful coastline and the fantastic views are some of the common characteristics that these two islands share.

Complete package that includes 7 nights accommodation in a hotel with breakfast, transfers and ferry tickets and tours

Stop At: Athens International Airport, Attiki Odos, Spata Artemida 190 04, Greece
Arrival at Athens airport - Reception by our assistant, waiting for you and transfer by luxurious car to the centre of Athens - Accommodation at your hotel. Free afternoon.
Duration: 6 hours

No meals included on this day.
Accommodation included: President Hotel or Similar 4* Hotel in Athens.

Stop At: Panathenaic Stadium, Vassileos Konstantinou Avenue opposite the statue of Myron Discobolus, Athens 116 35 Greece
The Panathenaic Stadium or Kallimarmaro is a multi-purpose stadium in Athens, Greece. One of the main historic attractions of Athens, it is the only stadium in the world built entirely of marble.
Duration: 15 minutes

Pass By: Old Royal Palace, Athina 105 57, Greece
The Maximos Mansion is located at Herodes Atticus Street 19, next to the Presidential Mansion and the National Garden of Athens. The building was founded in 1912 by Alexandros Michalinos, a wealthy shipowner from the island of Chios. Before the construction of the mansion, the site was a garden for the Royal Palace. Between 1941 and 1944, during the Nazi occupation of Greece, the mansion was used as the residence of the German Admiral of the Aegean Sea. After the war the building was briefly used as the residence of the U.S. ambassador in Athens. In 1952 Dimitrios Maximos sold the mansion to the Greek state at a favourable price. In 1982, the prime minister's office was moved into the mansion (prior to that, the prime minister's office was located inside the Parliament building).

Pass By: Temple of Olympian Zeus, Leoforos Vasilissis Olgas Leoforos Amalias, Athens 105 57 Greece
The Temple of Olympian Zeus is a former colossal temple at the centre of the Greek capital Athens. It was dedicated to "Olympian" Zeus, a name originating from his position as head of the Olympian gods. Construction began in the 6th century BC during the rule of the Athenian tyrants and was during the reign of the Roman Emperor Hadrian in the 2nd century AD, some 638 years after the project had begun. During the Roman period the temple, which included 104 colossal columns, was renowned as the largest temple in Greece and housed one of the largest cult statues in the ancient world.

Pass By: Arch of Hadrian, Leoforos Amalias, Athens Greece
The Arch of Hadrian, most commonly known in Greek as Hadrian's Gate, is a monumental gateway resembling—in some respects—a Roman triumphal arch. It spanned an ancient road from the centre of Athens to the complex of structures on the eastern side of the city that included the Temple of Olympian Zeus.

Pass By: Hellenic Parliament, Parliament Mansion, Athens GR-10021 Greece
The Hellenic Parliament is a neoclassical three-floor structure designed by Friedrich von Gärtner and completed in 1843, originally served as a palace for the Greek monarchs, hence sometimes still referred to as the "Old Palace". The building has been used for many different purposes — functioning as a makeshift hospital, a museum, etc. — until November 1929, when the government decided that the building would permanently house Parliament. After more extensive renovations, the Senate convened in the "Old Palace" on 2 August 1934, followed by the Fifth National Assembly on 1 July 1935. Although the monarchy was restored that same year, the building has housed Parliament ever since.

Pass By: Monument to the Unknown Soldier, Leof. Vasilisis Amalias 133, Athina 105 57, Greece
The Tomb of the Unknown Soldier is a war memorial located in Syntagma Square in Athens, in front of the Old Royal Palace. It is a cenotaph dedicated to the Greek soldiers killed during the war. It was sculpted between 1930 and 1932 by sculptor Fokion Rok. The tomb is guarded by the Evzones of the Presidential Guard.

Pass By: The Academy of Athens, 28 Panepistimiou Avenue, Athens 106 79 Greece
The Academy of Athens is Greece's national academy and the highest research establishment in the country. It was established in 1926, with its founding principle traced back to the historical Academy of Plato and operates under the supervision of the Ministry of Education. The Academy's main building is one of the major landmarks of Athens.

Pass By: National Library of Greece, 32 Panepistimiou Street, Athens 106 79 Greece
The National Library of Greece is the main public library of Greece, located in Athens. Founded by Ioannis Kapodistrias in 1832, its mission is to locate, collect, organize, describe and preserve the perpetual evidence of Greek culture and its uptake over time, as well as important representative evidence of human intellectual production. It ensures equal non-access to these items based on the freedom of knowledge, information, and research.

Pass By: Plateia Syntagmatos, Leoforos Vassilissis Amalias, Athens 105 63 Greece
Syntagma Square ("Constitution Square") is the central square of Athens. The square is named after the Constitution that Otto, the first King of Greece, was obliged to grant after a popular and military uprising on 3 September 1843Syntagma Square is the most important square of modern Athens from both a historical and social point of view, at the heart of commercial activity and Greek politics.

Stop At: Acropolis, Via Dionysiou Areopagitou Str., Athens 105 58 Greece
The Acropolis of Athens is an ancient citadel located on a rocky outcrop above the city of Athens and contains the remains of several ancient buildings of great architectural and historical significance, the most famous being the Parthenon. The term acropolis is generic and there are many other acropoleis in Greece. During ancient times the Acropolis of Athens was known also more properly as Cecropia, after the legendary serpent-man, Cecrops, the supposed first Athenian king.
Duration: 1 hour

Stop At: Propylaea, Acropolis, Athens 105 58 Greece
The Propylaea is the classical Greek Doric building complex that functioned as the monumental ceremonial gateway to the Acropolis of Athens. Built between 437 and 432 BCE as a part of the Periclean Building Program, it was the last in a series of gatehouses built on the citadel. Its architect was Mnesikles, his only known building. It is evident from traces left on the extant building that the plan for the Propylaea evolved considerably during its construction and that the project was ultimately abandoned in an unfinished state.
Duration: 15 minutes

Stop At: Temple of Athena Nike, Acropolis, Dionysiou Areopagitou Acropolis, Athens 10558 Greece
The Temple of Athena Nike is a temple on the Acropolis of Athens, dedicated to the goddesses Athena and Nike. Built around 420 BC, the temple is the earliest fully Ionic temple on the Acropolis. It has a prominent position on a steep bastion at the southwest corner of the Acropolis to the right of the entrance, the Propylaea. Nike was the goddess of victory in Greek mythology, and Athena was worshipped in this form, representative of being victorious in war. The citizens worshipped the goddesses in hopes of a successful outcome in the long Peloponnesian War fought against the Spartans and allies.
Duration: 15 minutes

Stop At: Parthenon, Acropolis Top of Dionyssiou Areopagitou, Athens 105 58 Greece
The Parthenon is a former temple on the Athenian Acropolis, Greece, that was dedicated to the goddess Athena during the fifth century BC. Its decorative sculptures are considered some of the high points of Greek art, an enduring symbol of Ancient Greece, democracy, and Western civilization. It was built in thanksgiving for the Hellenic victory over Persian invaders during the Greco-Persian Wars and it replaced an older temple of Athena, which historians call the Pre-Parthenon or Older Parthenon, that was demolished in the Persian invasion of 480 BC.
Duration: 15 minutes

Stop At: Acropolis Museum, Dionysiou Areopagitou 15, Athens 117 42 Greece
The museum was built to house every artefact found on the rock and on the surrounding slopes, from the Greek Bronze Age to Roman and Byzantine Greece and will in particular also house the sculptures historically known as the "Elgin Marbles" (sculptures stolen from the Acropolis in the early nineteenth century by Thomas Bruce, 7th Earl of Elgin and currently held in the British Museum) when these are returned to Athens. The Acropolis Museum also lies over the ruins of a part of Roman and early Byzantine Athens. The museum was founded in 2003 while the Organization of the Museum was established in 2008. It opened to the public on 20 June 2009. More than 4,250 objects are exhibited over an area of 14,000 square meters.
Duration: 15 minutes

Pass By: Port of Piraeus, Akti Miaouli 10, Piraeus 185 38 Greece
Early morning transfer to the port of Athens (Piraeus) to board the ferry to the island of Mykonos.

Pass By: Mykonos Transfer Services, Mykonos Airport, 84600 Greece
Upon your arrival on the island, you will be met and transferred to your selected hotel. Day at leisure in Mykonos to enjoy this unique island

Stop At: Santorini, Greece
At the indicated time you will be transferred to the port to board the ferry to Santorini. Upon arrival

in Santorini, you will be met and transferred to your hotel.
Duration: 1 day

Stop At: Santorini, Greece
Tour on the Island. We will enjoy the Akrotiri Archaeological Site, the Perivolos black sand beach and the Profitis Ilias Mountain.
Duration: 1 day

Stop At: Athens International Airport, Attiki Odos, Spata Artemida 190 04, Greece
According to your departure flight, you will be transferred to the airport, in a luxurious car.
Duration: 1 day

Informacion Adicional
"Confirmation will be received at time of booking"
"Children must be accompanied by an adult"
"Not wheelchair accessible"
"Near public transportation"
"Infants must sit on laps"
"A minimum of 2 people per booking is required"
"Most travelers can participate"
"Please note that our packages are meant for individual travellers, without a tour leader. However, we remain at your disposal throughout your visit with a 24-hour emergency phone number."
"This tour/activity will have a maximum of 8 travelers"
"Hand sanitizer available to travelers and staff"
"Social distancing enforced throughout experience"
"Regularly sanitized high-traffic areas"
"Gear/equipment sanitized between use"
"Transportation vehicles regularly sanitized"
"Guides required to regularly wash hands"
"Regular temperature checks for staff"
"Groups of a few people with great flexibility.

Distance to buses Guaranteed "empty seat next door" to the buses we use. Of course, those who travel with their family (spouses or children) are excluded.

Observance of health rules-protocols. Your safety is our primary concern."

Duración: 8 Days
Lugar de comienzo: Traveler pickup is offered
We offer pick up with a luxurious car either from Athens Intl Airport (ATH) or from your hotel, as long as it is situated within the limits of the City of Athens.