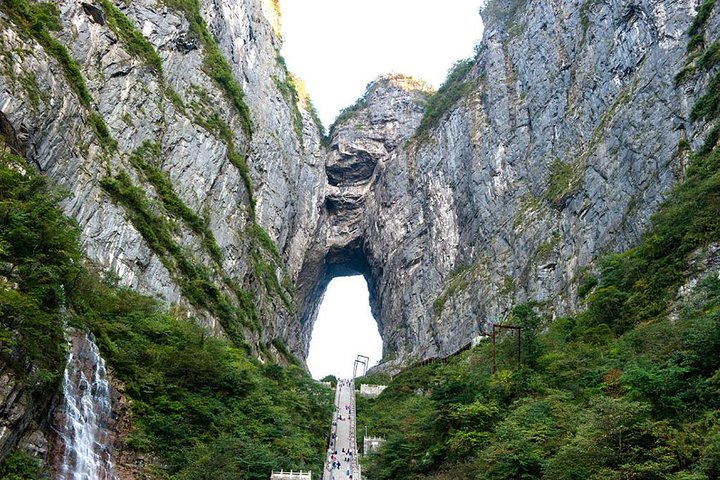 It's a well-arranged worry-free tour with perfect itinerary. You will visit the best attractions in Zhangjiajie and Fenghuang with private vehicles service. Visiting not only Zhangjiajie National Forest Park and Tianmen Mountain but also Fenghuang and an amazing evening show on this tour. It's a private tour with private transfers (a return trip between Zhangjiajie and Fenghuang) and all entrance tickets included. (Many other private tours do not include Fenghuang, because they think it is expensive to do it by a private car for a round-trip.)

7). Boating on Tuo River in the evening.

The optional escalator and chairlift on Tianmen Mountain are excluded.

Day 1: Zhangjiajie Arrival in the Evening (or late afternoon)

Stop At: Hehua Airport Parking Lot, Yongding District, Zhangjiajie, Hunan, China
Pick you up at Zhangjiajie airport (DYG) in the evening (or late afternoon), then transfer to your hotel by a private car/van.
Duration: 5 minutes

No meals included on this day.
Accommodation included: Over night at a simple hotel/hostel in Wulingyuan with a standard twin/double room

Stop At: BaiLong Elevator, National Forest Park, Wulingyuan, Zhangjiajie China
It's the highest outdoor elevator in the world with glass window. A quick and easy way to get to the mountain top.
Duration: 5 minutes

Stop At: Tianzi Mountain, Wulingyuan District, Zhangjiajie 427400 China
It's the best part of Zhangjiajie National Forest Park. It's also the highest peak among the mountains in Wulingyuan. Highest spot is over 4,000 feet (1.26 kilometers). Sometimes the clouds is low, and you will stand above the clouds, then you could see the Tianzi Mountain Clouds. You will also see Xihai Stone Forest.
Duration: 1 hour

Pass By: Tianzi Mountain Clouds, Tianzishan Town, Wulingyuan District, Zhangjiajie 427403 China
If the weather is good. Some times there are clouds, and you could see the beautiful clouds there.

Stop At: Xihai Stone Forest, Tianzishan Nature Reserve, Wulingyuan District, Zhangjiajie 427400 China
West Sea Stone Forest is one of the most stunning view you could get at Yunqing Rock sightseeing platform on the top of Tianzi Mountain. Need good weather as well.
Duration: 40 minutes

Stop At: Tianmen Fox Fairy Show, Tianmen Mountain, Zhangjiajie China
The most popular performance in Zhangjiajie. It's an out door theater. So if it's a heavy rainy day, then it will no show available. And you will watching another famous show Charming Xiangxi Performance (with a middle seat).
Duration: 2 hours

Pass By: Charming Xiangxi Theatre, Huajuan Road, Zhangjiajie China
It's a indoor performance. Best alternative for Tianmen Fox Fairy Show in a rainy day. You will choose one of these two shows to watch. A middle seat ticket (normal vip seat) is included. However you have an option to upgrade your ticket to a front seat (super vip seat) with extra cost on your own.

Meals included:
• Lunch: A simple Chinese lunch (or western fast food) on the mountain top.
Accommodation included: Over night at a simple hotel/hostel in Yongding district with a standard twin/double room

Stop At: Tianmen Mountain National Forest Park, Tianmen Mountain Ticket Station, Yongding District, Zhangjiajie 427000 China
One of the must-see attractions in Zhangjiajie (one is Zhangjiajie National Forest Park, another is this one Tianmen Mountain). You will see 999-step stairs Lead the Way to Heaven's Gate, Rock Hole of Heaven's Gate and experience the glass skywalk and riding the longest cable car of the world. The entrance ticket including one-way cable car ride and one-way eco-friendly shuttle bus ride. Not including the optional chairlift ride and a short distance escalator ride.
Duration: 4 hours

Stop At: Phoenix Ancient Town, Tuojiang Town, Fenghuang County 416200 China
It cost about 3 hours by a private car transfer from Zhangjiajie to Fenghuang. You will see the different beautiful view of the town in the evening. You will see the gorgeous lit up buildings and bridges. A boat riding on Tuo River in the evening is included in the tour price.
Duration: 2 hours

Pass By: Phoenix Hong Bridge, Hongqiao Street, Fenghuang County 416207 China
This bridge is a landmark. It is beautiful from outside.

Stop At: Phoenix Ancient Town, Tuojiang Town, Fenghuang County 416200 China
Discover the ancient town by yourself for a half day (If you are not comfortable with yourself, Your guide will escort you as your interpreter). You could appreciate the beautiful river, walk up and down both sides of Tuo River, enjoy the harmonious atmosphere in the ancient town. Getting relax while watching the rows of traditional wooden houses built on stilts and looking at what the local people do. In the afternoon, driving back to Zhangjiajie by our private car/van (about 3 hours driving time) and catching your late afternoon flight (or evening flight) at Zhangjiajie Airport.
Duration: 4 hours

Pass By: Hehua Airport Parking Lot, Yongding District, Zhangjiajie, Hunan, China
At the end of the tour, drop you off at Zhangjiajie airport for catching your late afternoon flight (or evening flight) for your next destination.

If you are going to departing Zhangjiajie by train or bus instead of flight, it's also ok to drive you to those stations in Zhangjiajie.

If your flight will depart Zhangjiajie in the morning of the following day after this tour, please choose our alternative tour package.

Informacion Adicional
"Confirmation will be received at time of booking"
"Not wheelchair accessible"
"Near public transportation"
"No heart problems or other serious medical conditions"
"Most travelers can participate"
"This is a private tour/activity. Only your group will participate"