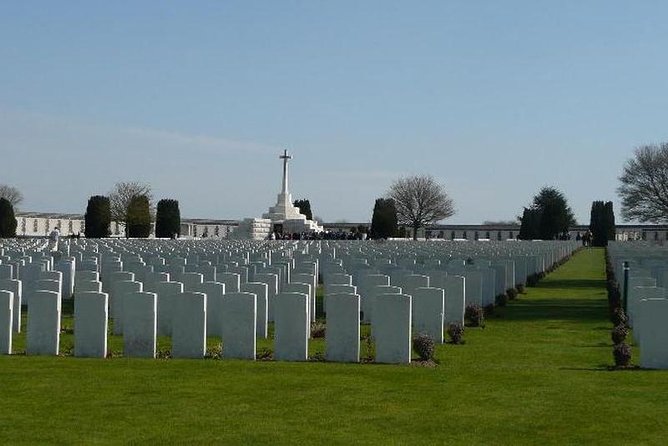 In the 13C., along with Bruges and Ghent, Ypres was one of the great Cities of Flanders though it later entered a long decline. In the First World War it was the fulcrum of the Ypres Salient, a bitterly fought-over enclave protruding into the German lines, and the town was almost completely destroyed. After the war, it was rebuilt in traditional style.

Today, it is a focal point of commemoration of the terrible slaughter that took place between 1914-1918, while the countryside around is a vast necropolis with around 170 military cemetery and many other reminders of war. Beside visiting the town, we will discover: The Menin Gate; Saint George Church; Flander Field Museum; Tyne Cot Cemetery; The Memorial Museum Passchendaele; Mont Kemmel and Bayernwald Trenches; The American W.W.I. Cemetery; Diksmuide.

The delightful countryside surrounding the city of Ypres offers many picturesque routes for walking and bicycling, and welcomes visitors to a peaceful and relaxing atmosphere.

This most important British Memorial of the First World War, It commemorates the names of 54.896 soldiers who have no known grave. It stands on the site of the old Menenpoort, the gateway guarding the road from the little Town of Menen to the East. This was the route taken by countless thousands of soldiers marching to and from the front line. Every evening at 8pm, traffic stops and the buglers of the Ypres Fire brigade sound THE LAST POST “

The interior contains many poignant memorials, among them that of Sir John French, commander of the British Expeditionary Force.

This innovative museum opened in 1998, retraces the history of W.W.I, in a most compelling way.The museum pays particular attention to the experiences of ordinary people, evoking the terrible trench warfare end everyday life behind the front.

In the Third Battle of Ypres, the British – mostly Australians and Canadians – paid for an advance of 8km/5mi towards the ruined village of Passendale with almost 400.000 casualties. The cemetery here is the LARGEST COMMONWEALTH WAR CEMETERY anywhere, with 11.856 tombstones

The Battle of Passchendaele 1917 was one of the bloodiest Battle of WW I. You will want to visit the Tyne Cot Commonwealth Cemetery, and the Vladso German Cemetary.

In October/November 1914 it was one of the strategic points in the Battle of the Ijzer when the Belgian and French units put up heroic resistance to the German advance. The bombardments were so intense that the town disappeared from the face of the earth. In Diksmuide, we will discover the famous “Dodengang” . For four years, Belgian soldiers resisted the German advance in these dug-outs, which became known as the “Trench of Death”. Visitors can walk through the two long trenches, in which the sandbagged parapets have been faithfully reproduced in concrete.

Informacion Adicional
"Confirmation will be received within 48 hours of booking, subject to availability"
"Not wheelchair accessible"
"Near public transportation"
"No Serious Medical Conditions"
"Most travelers can participate"
"This experience requires good weather. If it’s canceled due to poor weather, you’ll be offered a different date or a full refund"
"This is a private tour/activity. Only your group will participate"

Hora de Inicio: 8:00 AM
Duración: 8 To 12 Hours
Lugar de comienzo: Traveler pickup is offered
We pick-up our guests from any hotels in Brussels.